Join the Conversation (0)
In the face of the recently-revealed Honda Passport, it seems that Nissan felt it was time to refresh their Murano – a vehicle the Passport is aimed directly at, along with the Ford Edge. We were dispatched to the frozen roads of south-central Quebec to test it out alongside the all-new Altima on the open road and the frozen track at Mécaglisse Circuit, about 90 mins North of Montreal.

The changes for ‘19 are subtle; the front bumper has been redesigned, as has the lower grille and LED headlights, foglamps, and taillights. They’ve thrown in a set of new 20” wheels on the Platinum trim for good measure, which you can see on the vehicle pictured here. Overall, this generation of the Murano continues to age well and stand out from the crowd in the two-row, mid-size CUV segment (or is that SUV? It was called both by Nissan during the event).

The bigger changes come inside, with Nissan’s Safety Shield 360 suite of driving aids getting an overhaul with the addition of intelligent emergency braking with pedestrian detection, high beam assist, rear intelligent emergency braking and lane departure warning. These features join the blind spot and rear cross traffic alert systems that were found on last year’s vehicle. 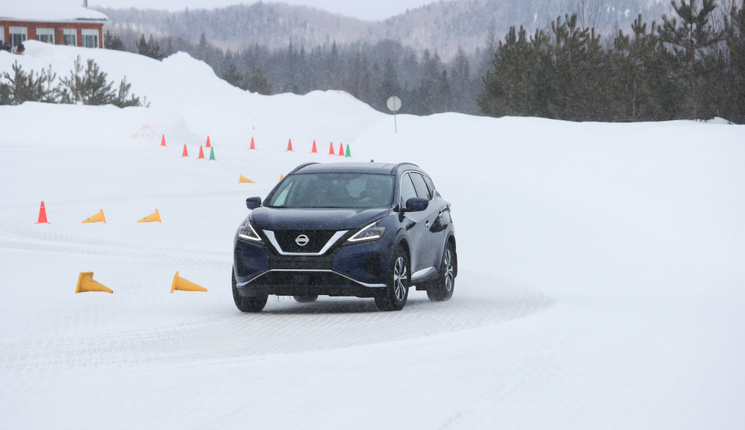 On the infotainment side, I’m sure there are more than a few buyers that are going to be happy to find the existence of Apple CarPlay and Android Auto as standard, providing a nice cherry on top in conjunction with Bose Premium Audio. The display screen itself has also been improved, appearing much more hi-def than previous, and within a much lower-profile housing, too. It’s too bad they haven’t done anything to improve the backup cam; it remains the grainy mess it had been previously, made all the more so by the roadspray and salt concoction that seems to cover pretty much every car you’ll see ‘round these parts this time of year. I’m also not a huge fan of the native navi system – the roads aren’t that well marked and until you learn to watch for the tiny arrows on the bottom left guiding you to the next move, you may miss a turn or two. We did, and when you’re driving through Montreal, that can be quite unfortunate. Heck, we almost missed our turn off to the famous Gibeau Orange Julep! Luckily, you can always turn to Google Maps now that CarPlay and Android Auto are supported. 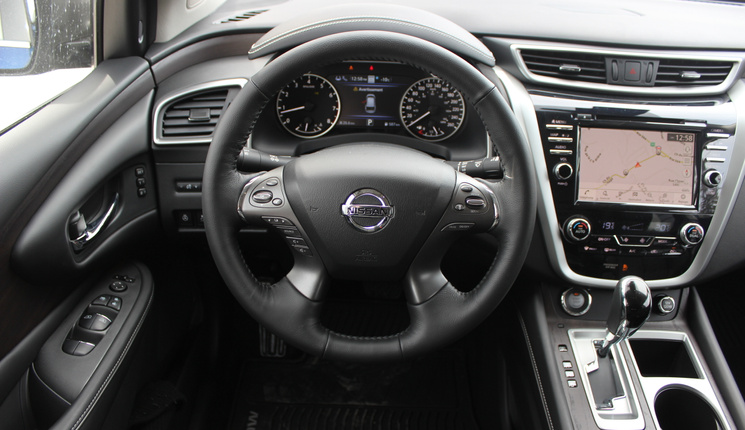 Another big interior addition includes new materials used for various bits, to provide a more upper-class, luxurious feel to the proceedings. That’s no smoke and mirrors on Nissan’s part, either; this cockpit is a comfortable, well lit and ergonomic place to be, factors helped all that much more by the return of the super-comfortable, NASA-inspired Zero Gravity seats that support you in all the right places and ensconce you in all the others.

Power from the VQ V6 remains unchanged at 260 hp and 240 lb-ft of torque, fed to all four wheels (if need be; it’s an intelligent system that only provides power when and where it’s needed) via the company’s long-serving XTronic CVT transmission. While these don’t tend to lead to the most involving of drives, Nissan’s offering is smooth in its operation with little of the whine that these types of transmissions are often derided for. Plus, Nissan has programmed in some synthetic shift points so at least it kind of feels like there’s an actual swapping of cogs going on. Further, unlike the all-new Altima that we tested alongside the Murano, the latter gets a manual mode for a little extra nod to spirited driving. There are no paddle shifters, but it’s a start. 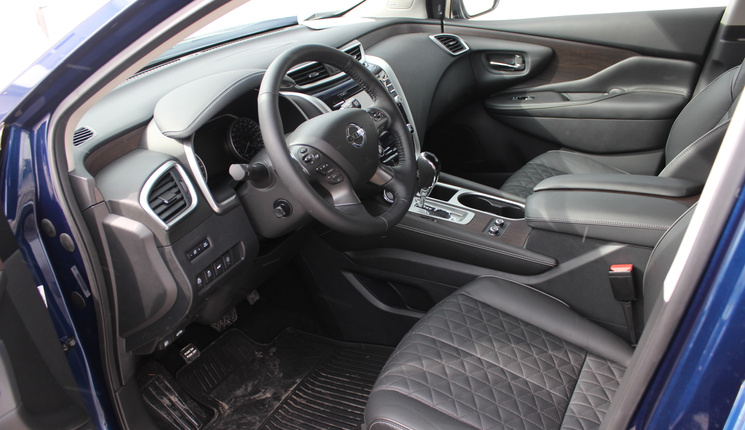 The Murano feels powerful enough; a naturally aspirated V6 engine will do that, with power getting dispatched immediately. The real takeaway for me, however, was how it rode and handled, both on the open road and ice circuit.

On the open road, the pockmarked, snow-packed and grimy roads were no match for the Murano’s well-tuned dampers, as they’d swallow up pretty much everything we threw at them. Nissan may have a luxury arm in Infiniti, but darned if some of that know-how hasn’t filtered down to the Murano. It does stand to reason, though; Nissan says the Murano is aimed at empty-nesters, and a good, comfortable ride is something that buyers of that type are always looking for.

On the track, meanwhile, we were given the opportunity to really test the AWD system’s mettle; after all, it’s a lot easier to try and get a vehicle unsettled when you have the safety net of a wide track and a pillowy snowbank in the back of your mind. 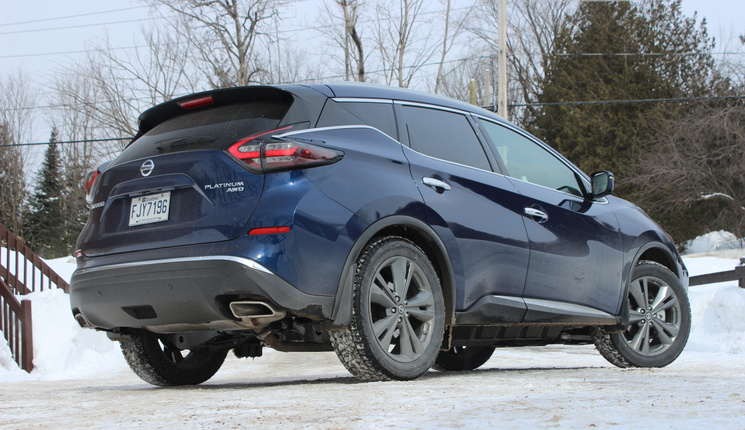 In the end, however, we really didn’t need any of that because this thing’s just so durn capable, even in these conditions. While you can get the rear end rotating more through turns here than you can with the Altima – a higher centre of gravity will do that – the slightest bit of countersteer is all that’s required to right the ship, as the AWD system does the rest, braking the wheels that need it on one hand, and sending power to the correct wheels on the other. It’s a bit of a power-shuffle ballet, and the Murano is all that much more stable and predictable because of it. Plus, for the hooligan in us (well, me, anyway), being able to let the tail of your for-the-masses CUV (SUV. Whatever) run wide in these conditions is actually quite fun. You may laugh at the sentiment but remember: it was Nissan that took the Murano’s then little brother, the Juke, and turned it into a GT-R-powered, AWD behemoth. Why shouldn’t the Murano be allowed to let its hair down a little, too? I mean, it’s great that Nissan has provided it with all this new tech, higher quality interior materials and so on, but where’s the fun in all that?

Speaking of letting your hair down


While I’m sure a Juke GT-R would be fun in these conditions, I wouldn’t say that this is where it would excel.

Indeed, that’s much more the purview of this: the Altima-te AWD.

Based on the all-new Altima sedan, this flared-fendered, cat-tracked beauty is tailor-made for conditions like this. Actually, the packed snow we were on isn’t even hardcore enough; the folks that created the Altima-te will tell you that it’s much happier in deep snow. 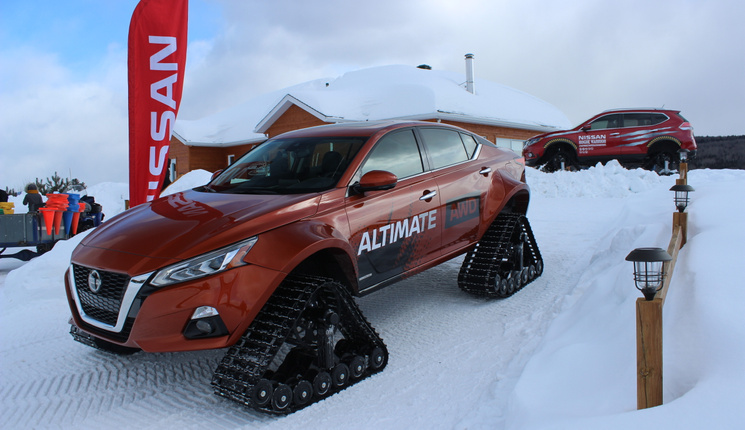 Actually, you feel that right away as we were instructed to make sure we were moving at 5 km/h or so before we even thought of turning the wheel (yep; no fancy input systems here; the interior is stock Altima, right down to the steering wheel) as the amount of grip provided by the tracks will put undue strain on the steering rack when stationary.

Once moving, though, the turn-in is snowmobile-like it its immediacy; I thought all that added width and weight would cause massive understeer, but it was all completely neutralized by those tracks. I guess the real surprising thing is that aside from quite a lot of road noise when starting out (duh) and movement through the wheel, driving the tracked Altima felt pretty natural after only a few minutes, the toughest part being sure not to clip the snowbanks as even with the higher seating position (much more Murano than Altima, it has to be said), it’s hard to see what’s going on over those flared fenders. Which are gorgeous, by the way; seeing them inspired visions in my head of a complete opposite car to what we had – a lowered, wide-bodied, stanced Altima on airbags and wide tires. Don’t think it won’t happen. 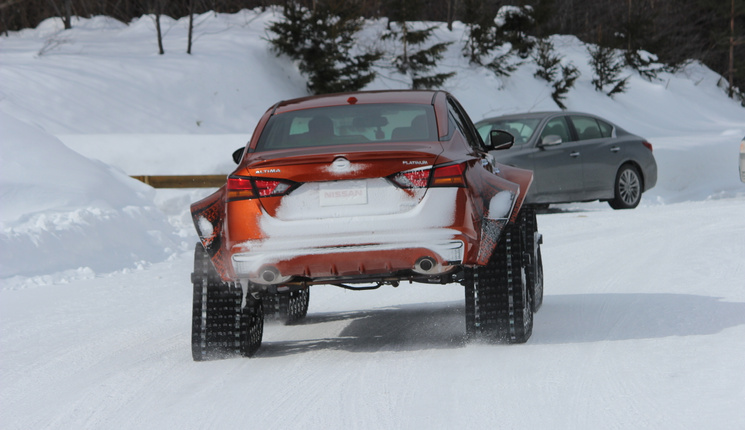 The crazy thing is that while some slight modification had to be done to the suspension, it’s a pretty stock affair overall, right down to the brakes and axles. As to the question of why do it? Well, when asked, Nissan basically said “why not do it?” They’ve done stuff like this before (a static Rogue on tracks overlooked the event), and this being the first-ever AWD Altima (standard in Canada), it was the perfect chance for them to go back to that well.

We, of course, are glad that they did.