The Perfect Supercar, For this Porsche loving Richmond Hill car enthusiast a manual transmission GT3 is a must-have

Join the Conversation (0)
To say Dr. Daniel Sun loves cars might be an understatement. The dentist and father of two counts owning 34 vehicles to date, with a modest six currently housed in his garage.

In addition to his daily driver, a 2019 Mercedes-AMG E53, he has a 1972 Volkswagen Beetle and a 2020 Jeep Wrangler. Sun’s wife, Patricia, a sales representative with Barry Cohen Homes, relies on her Range Rover and a 911 (Type 992) Carrera S. The latter, a 2021 model, was the family’s newest Porsche until last month.

When Sun caught wind that Porsche was introducing the GT3 with a manual option, he reached out to Pfaff Porsche to secure an allocation of the 992 generation GT3. That was December 2020.

Sun received his 2022 Porsche 911 GT3 almost a year later. The timing was right since he had just sold his Ferrari 488 Spider and had room in his garage for the new car. He tells us why he loves the 911 GT3.

“I sold my Ferrari during [the pandemic] because it’s a seller’s market,” said Sun. “There's a shortage of used cars, so the used car market has been doing really well. There are a lot of people looking for sports cars, so I was able to sell my Ferrari without incurring any major loss. It just made sense to sell.”

“I've always loved Porsches; they’re just so well engineered and so fun to drive,” said Sun. “I've always wanted to have at least one 911 in my garage. My wife – who also loves cars – has a 992 Carrera S that’s her first daily driving 911. She's always been driving an SUV, chauffeuring the kids and whatnot. And now that the kids are a little bit older, she wants something that's more fun.

“For me, GT3 is always at the top on my list in terms of the cars that I want to have in my garage. It’s kind of a back to the basics track-focused car. I just love it. It’s so visceral and engaging to drive, even with a PDK. But I’m more of a traditionalist, I like driving manual cars.

“I’m always on YouTube watching car videos, but when I read the 992 model was coming out with a GT3 with manual transmission and new front suspensions, I got really excited. I contacted my Porsche dealership, where I’ve had a long business relationship, and they were kind enough to give me the chance to purchase the new GT3.” 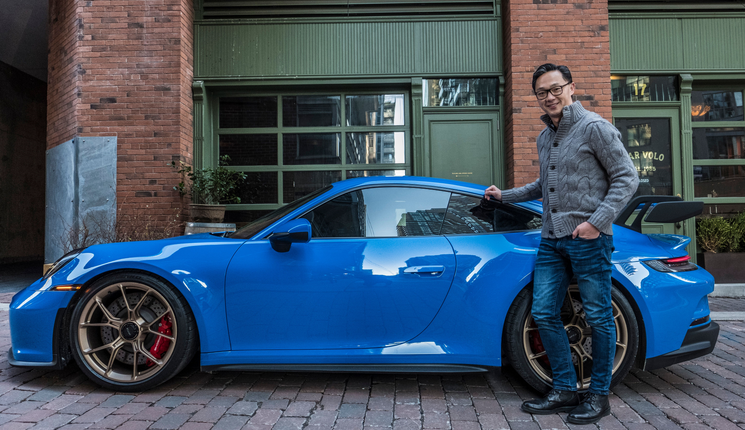 Sun got his car in Shark Blue with the Touring Package that includes black side window trims, tinted lower front lights, black tailpipes and a Satin Black Porsche logo on the rear. He loves that the engine can rev up to 9,000 rpm. He also loves the car’s ability to accelerate from 0 to 100 km/hr in 3.9 seconds, and how it is able to reach a maximum speed of 320 km/h. However, Sun hasn’t taken the track-ready car out to test its abilities since its more of a summer vehicle.

“I've only driven it from the dealership and to my detailer, Auto Bath Elite,” said Sun. “I got the car fully protected with a full-body paint-protection film and ceramic coating. I haven’t driven it much, but from what I can tell, it’s everything that I expected and then more.

“I tell people, it's like the steering wheel has a sense of knowing where I want to go with the slightest movement. You can feel the car moving and responding. Just being a naturally aspirated engine, everything responds so instantaneously, there's no turbo lag. The car is so well built – so solid – and so low to the ground. It just makes you feel really special when you drive the car.

“I plan on taking the car to the Canadian Tire Motorsport racetrack later in the summer. I haven't done too many track meets, but I'm planning on doing more with this car because this is meant for the track.”

Despite Sun’s tendency to sell and purchase new rides for his collection, he confesses that this might be one exception.

“I don't have any rules [with what I buy]. I look, and when the right car comes along, I get the itch again. [Laughs] But I’ll be keeping this GT3 for a while.”

“I love the GT3’s good looks,” said Sun. “It's got presence. It has a big wing on the back, and I love how the Shark Blue paint option I picked – it’s a new colour for this model – just pops in the sunlight. I matched that with Stain Neodyme wheels, which is a matte gold finish. I think it’s a great colour combination with the blue paint.

“I also love the full racing bucket seats,” said Sun of the $6,740 option. Made of carbon fibre-reinforced plastic, they have a high-gloss carbon-weave finish, an integrated thorax airbag, plus electric height adjustment and manual fore/aft adjustment.

“They are lightweight and look stylish. They’re not the easiest seats to get in and out of, but once you are settled in them, they provide so much support on the sides that you won’t find yourself sliding around when going fast on a racetrack.”

“With such a low-riding car, having a rearview camera and front parking sensor are a huge assistance,” said Sun of the ParkAssist system and the reversing camera. “I wouldn’t want to damage the front aerodynamic pieces by hitting a curb.”