WHY I LOVE MY VEHICLE: 2021 Tesla Model Y Long Range

Join the Conversation (0)
LABEL: Why I Love My Vehicle

HED: Crossing over to electrical comfort

DEK: For this busy real estate broker, the Tesla Model Y is a comfortable second office that’s packed with a bevvy of cool features but delivers on environmental consciousness

Toronto’s own Paulina Vu practically lives in her car.

Dealing primarily in residential real estate, Vu relies on her vehicle to get to site visits, while providing a comfortable ride to her clients. She’s also active in the community, volunteering at Don Mills’ Better Living Health and Community Services’ Meals on Wheels program every Tuesday. She also works with a food bank, delivering food to nine different families on Wednesdays.

Vu’s driven a gamut of cars over the years, starting with a Ford Mustang she shared with her siblings in high school. She then moved on to a Nissan Sentra, which was followed by an Infinity G35x; a hand-me-down from her parents. When the latter broke down, Vu turned to the 2017.5 Nissan Rogue. It was a same-day purchase that was driven by her immediate need for a vehicle, and influenced by her experience with the car (she had just returned from a trip where she rented the vehicle) and brand (“my other Nissan was really reliable,” Vu said).

As a successful real estate broker at PSR Brokerage, Vu was often questioned by her colleagues for her modest choice for a vehicle. When it came time to buy a new car, Vu didn’t consider any other brand but the Tesla. She had been introduced to the brand through a friend who owned a Tesla Model 3. Vu was smitten with the car: Besides having no issues with battery life when they went on road trips together, she also found the interior and details within the vehicle impressive.

Eyeing the brand’s compact crossover, Vu admits that she didn’t even test drive the vehicle before she made her purchase online early this year. As luck would have it, she found herself picking up her 2021 Tesla Model Y Long Range from the Toronto-Lawrence Avenue Tesla Store a few weeks later. She tells us what she loves most about her vehicle.

“I was never the kind of person that wanted a flashy car,” said Vu about her Model Y. “[I needed] something that was comfortable, that has a lot of storage space, and that was practical. The Tesla is a really cool car, but my main reason was mostly for the environmental aspect. I drive so much, especially in the winter, and I’m often waiting in my car between showings. Sometimes I would leave the car on for the heat since it’s so cold out, but I would also feel bad about idling. I drive all over the city. I live in the Entertainment District, but volunteer in the Don Mills area, and go to North York to visit my parents, so I wanted an electric option.

“The car is like my second office, even more so with the Tesla. I need something that’s comfortable because I drive it and my clients – except for a little while during the pandemic when I didn’t – pretty much every day. 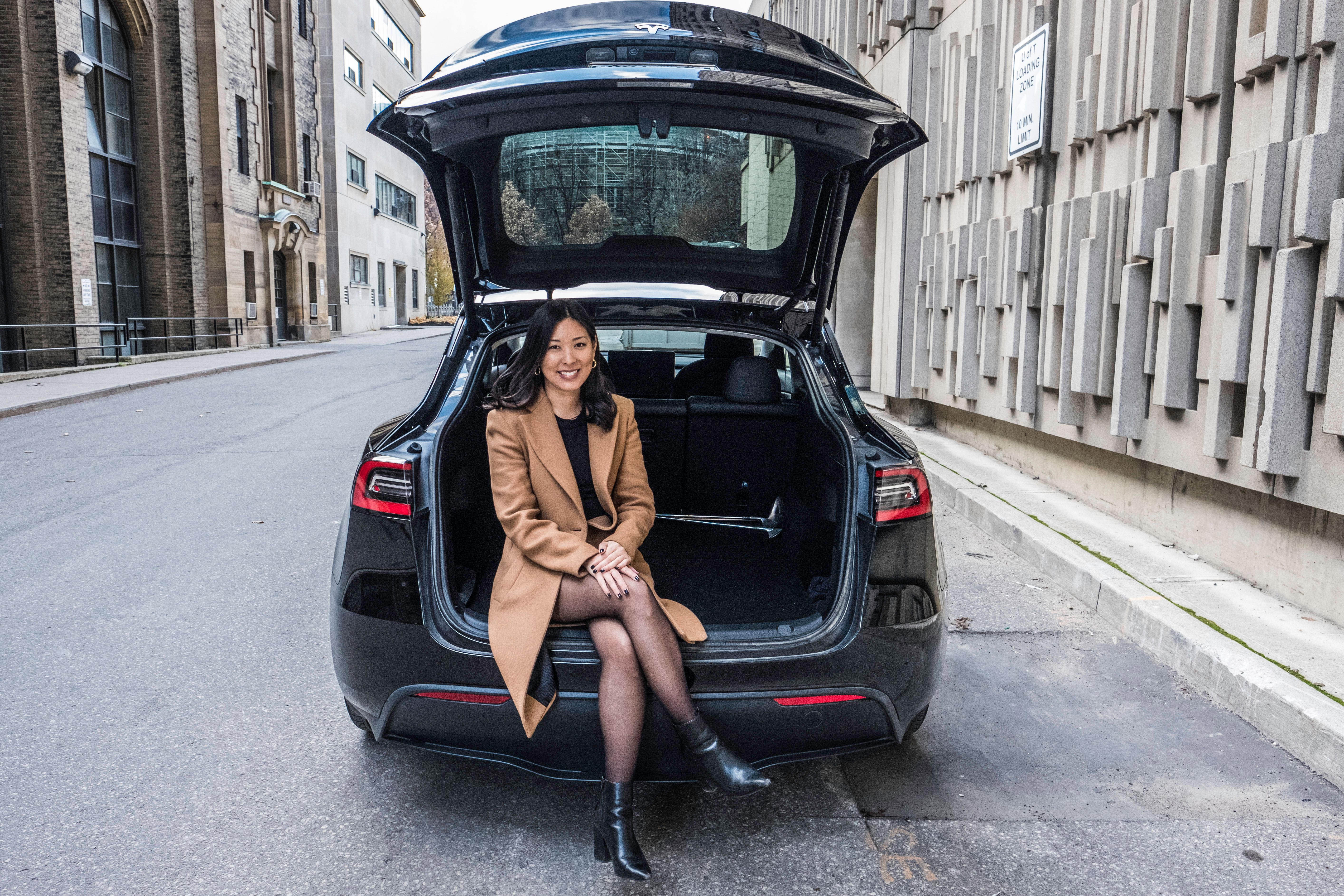 “I also need a lot of cargo space, so I opted for a small SUV. I feel like having the extra cargo space is better because I have so much stuff in it: I’ve got lock boxes and sometimes “For Sale” signs. I just started golfing this year and I keep my golf clubs in my car. And it’s good for things like going to IKEA. I also volunteer at the food bank, which requires a lot of room for all the food I transport. And I never have any issues with space, especially when I [fold the second row] seats down.”

Being her mobile office, Vu outfitted her Model Y with options that catered to her daily needs.

“There's a base model but I opted for the one where you could get more kilometers for your battery,” said Vu. “Tesla’s standard colour is white, but for any other colour or upgrade you pay an extra $1,300 [for each add-on]. I changed the car’s colour to black and then I upgraded it to Full Self Driving (which was another $10,600). So, all in, with taxes, my car was about $94,000.

“Every Tesla comes with autopilot – the car steers itself when you’re on the highway, but you can upgrade to Full Self-Driving, which is what I did. It’s still the beta version and it’s not as good in the city because you still need to do the turns yourself. It’s great on the highway and will prompt you to put on the turn signal if you want to change to a faster lane, and then it’ll change the lane for you.

“I also like that everything is done on a touchscreen, even opening the glove box. At first, I didn't think it was user-friendly because it was just so different from my other car, but you can figure everything out pretty easily.

“There are cool things, like the Dog Mode. So, if you leave your pet in the car, it's climate controlled. And on the big screen, it'll say ‘Don't worry, my owner is coming back’ or something like that. So that if other people see your dog in your car on a summer day, they'll know that it's going to be OK in the car.

“They have something called Sentry Mode, which I use a lot. There are [external] cameras all around the car that are used for self-driving, but they’ll record any activity within a meter of your car when it’s parked. Then when you return to your car it'll show you all the clips of people around your car. You can see everything from the Tesla app on your phone. If someone tries to break into your car when you have Sentry Mode on, it’ll blast music and start honking the horn and make a big commotion to try to scare the person away, which I think is kind of cool.

“There’s also gimmicky things. When you're driving, there's always a little image of your car on the touchscreen, but you can show it on a Rainbow Road in Autopilot. You can prank friends with the Fart app; I haven’t done it on my clients, but I’ve shown them. I'm part of this Facebook group called Tesla Divas, and it’s mostly North American female Tesla drivers who share [these Easter eggs] with the group.

“They also have a HEPA filtration system, which filters any toxic chemicals from getting into the cabin of your car. I think it's designed like how hospitals have their filtration system, so it ensures that the air that you're breathing in your car is good.

“They have something called Tesla Premium Connectivity, which is the internet service you get in your car. It connects directly to your Spotify, and the web browser is really convenient. They have Netflix and YouTube, which you can only use in Park mode. If I'm just charging my car for 30 minutes, I could catch up on a show.”

“I charge about once a week, or every five days in the summer. The version that I have gets 525 kilometers for a full charge, but in the winter things like the cold will make the battery not last as long, so I would have to charge every three to four days. I live in a condo downtown, which doesn't allow me to have a charger installed – unless I pay a few thousand dollars – so I resort to the public Tesla Supercharger that [rapid] charges in 30 to 40 minutes.

“Tesla also gives you a [car kit with a mobile] charging system. You could just plug your Tesla into a regular [outlet], but I don't have [an outlet in the parking garage] where I live. So, if I stay overnight at my parents’ house or if I go to the cottage, I just plug my car in [an outlet]. It takes longer with a regular plug – a full day for a full charge or six kilometers an hour. It's really slow so you have to time manage, but I’m used to it now. Sometimes I forget that I have to charge my car and I’ll be late [to my meeting].

“I do my taxes and expenses every year for work. I found that I was spending upwards of $600 per month on gas. Some months it was $400, but it was expensive. I drove so much. So having an electric car has been a game changer. If I had a house, I would hardly be spending any money at the Supercharger; I don't think it increases your utility bill too much, but I would wake up with a full charge every morning. And if you want the faster charger at home — which is similar to the plug your dryer would use — that would be a one-time fee of $2,000 for the charging system and the labour to install it with a licensed electrician.

“The Tesla is so low maintenance. With my Nissan I would always have to take it in for oil changes and stuff like that. But because there’s no engine in the Tesla, you don't ever have to deal with oil changes. It's updated through the Tesla app on your phone every few months, and it completely updates the software on your car. So that's most of the maintenance you’ll need.”

“There's buttons on your steering wheel, so if your friend is in the car, you can actually move a [whoopee cushion in the app] to whatever seat you want,” said Vu. “When you press the [infotainment display] button, a fart noise will come out. It’s very realistic sounding. And it'll be a different sounding fart every time you press the button, which is kind of funny.

“Cars that aren’t electric don’t have as much space,” said Vu. “My Tesla has so much cargo space because there's no engine. The Rogue had a lot of space and a big trunk. To keep things tidy, I would put my lock boxes and stuff like that under the [cargo floor]. The Tesla also has that but it's even deeper. So [the Tesla] has a massive back trunk when you [fold the second row] seats down, and the frunk; a front trunk which is smaller. If I'm doing takeout, I usually put it in the frunk just because I don't want my car to smell like food.”

“You don’t have an actual key,” said Vu. “The car uses your phone and detects it using Bluetooth. It’s ‘on’ when you are sitting in the driver seat, and it automatically turns off when you walk away. For people who want to use your car (if they don’t have the phone app), there’s a key-like card that you just tap.

“There’s a feature called Smart Summon. So, for example, if you’re at the mall and you don’t want to walk to your car in the parking lot, you can open the Tesla app on your phone and hit a button that tells the car to come to you, and it will pick you up from where you are standing. It only works in parking lots, not city streets, but it’s always funny to get stares from people when they see the car moving with no one in the driver seat!”