WHY I LOVE MY VEHICLE: 2021 Jeep Wrangler Unlimited Willys Sport

When Newer is Better....Trading their new Wrangler for a limited edition Willys, this family discovers that Jeeps come with fun features and a community

The manager of Hagerty Insurance’s Signature Services Group already owned a few cars, including a company car he used to commute to work from Wasaga Beach. When he and his wife, Laurie Coupland, were looking for a fun new vehicle, good fuel economy or practicality weren’t their main concern. Instead, they wanted something they could enjoy with the top down when the weather was nice.

It was around the same time that Jeep Wrangler revamped, replacing the JK with the JL series. There were multiple changes made to the vehicle, from a new diesel engine to new styling, modern amenities, and overall improved reputation and reliability. So, the couple jumped on board and purchased the 2019 Jeep Wrangler.

But when Jeep announced that it was issuing the Willys edition for 2021, Copeland, who always had a penchant for quirky cars (prior to the Wrangler, she owned a Nissan Juke) grew excited. The pair figured out a way to trade in their 2019 for the 2021 Jeep Wrangler Unlimited Willys at Orangeville Chrysler in October 2020. Although the Jeep is Copeland’s daily driver, Finkelstein takes it out often for his pleasure drive. Here, Finkelstein shares why he loves his Jeep.

“The main reason we bought the Jeep was its resale value,” said Finkelstein, whose work is in providing specialty insurance for high-end vehicles. “We compared this to the Mini Countryman - and I know they're not comparable vehicles, but they were the same price range — and I looked at the resale value after a year, and the Countryman was close to half while the Jeep was still almost the original retail value. 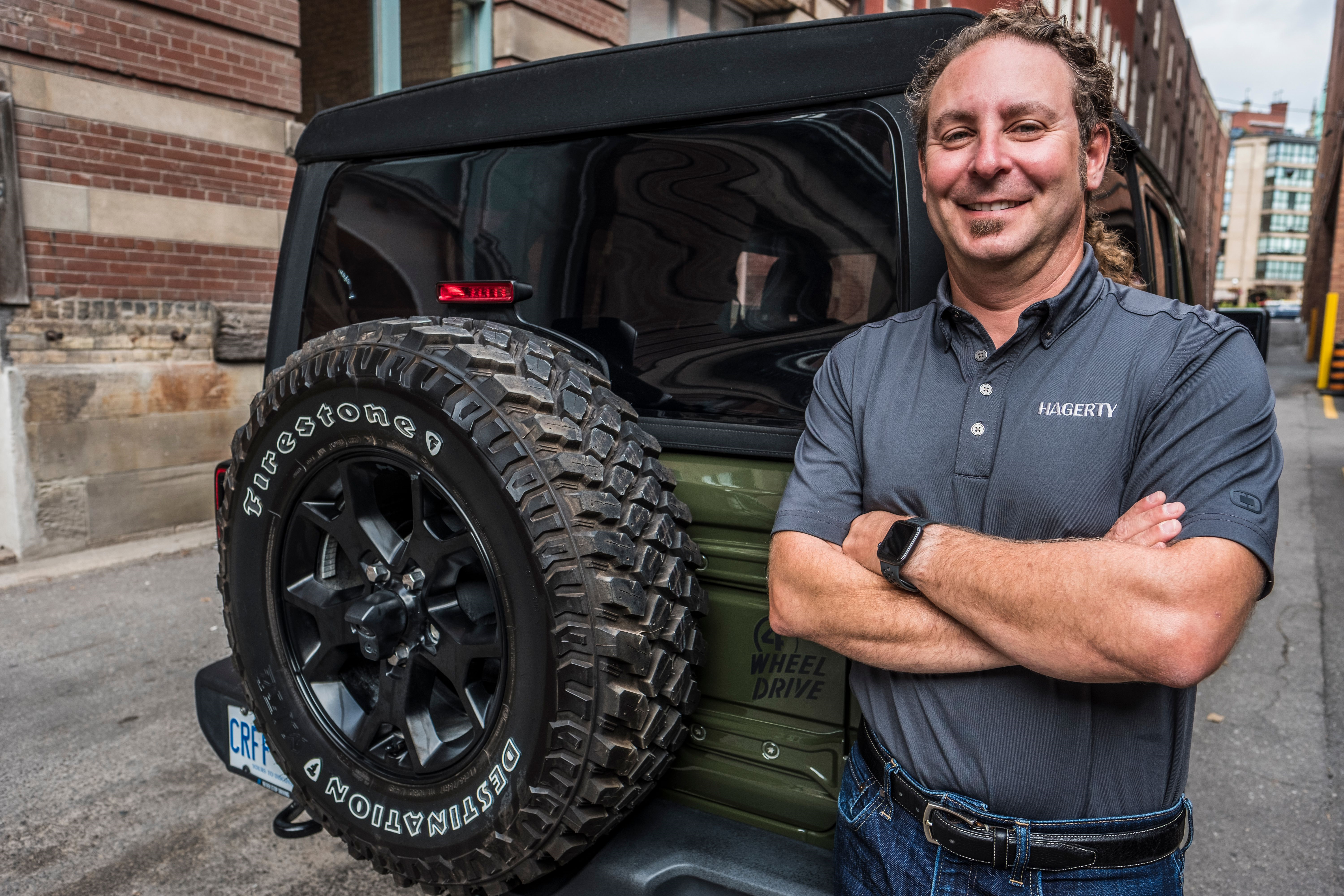 “I’m not exactly sure why. I think it's the desirability and fun factor. They're pretty bulletproof vehicles too – you can really beat it, and the price is good. That's why we switched to the 2021 because we didn't lose anything. Yes, we had the cost of using it for a year and a bit, but the Jeep holds its value, and there aren't a lot of cars on the market that do that.

“We bought the Jeep unseen and we put our money down before it arrived on the lot,” said Finkelstein. “Our dealer was able to find us an early stock from another dealer in St. Catharines. There wasn’t a lot of information about that specific vehicle because it was so new, but we already knew what the Jeep was like, and the interior options are very similar, so we knew what we were getting into. We were buying the Willys package more than anything. I think our 2019 Jeep sold within a couple days of when they put it on the used Jeep lot.

“The 2019 we bought felt more like a street Jeep. It had less aggressive highway tires, and a color (charcoal grey) that wasn't very dynamic. The Willys suits our personality. We're not off-roaders, so it's not like a crazy built-up Jeep, but it’s got more aggressive wheels, includes LED headlights (as opposed to the 2019 which has it as a higher-level option that we didn't go for), a four-wheel drive sticker on the tailgate, and the Willys badging on the side. We were super excited for the sort of heritage the Willys brand adds to the vehicle, and the Sarge Green was really the determining factor. We bought it for the colour. [Laughs.] 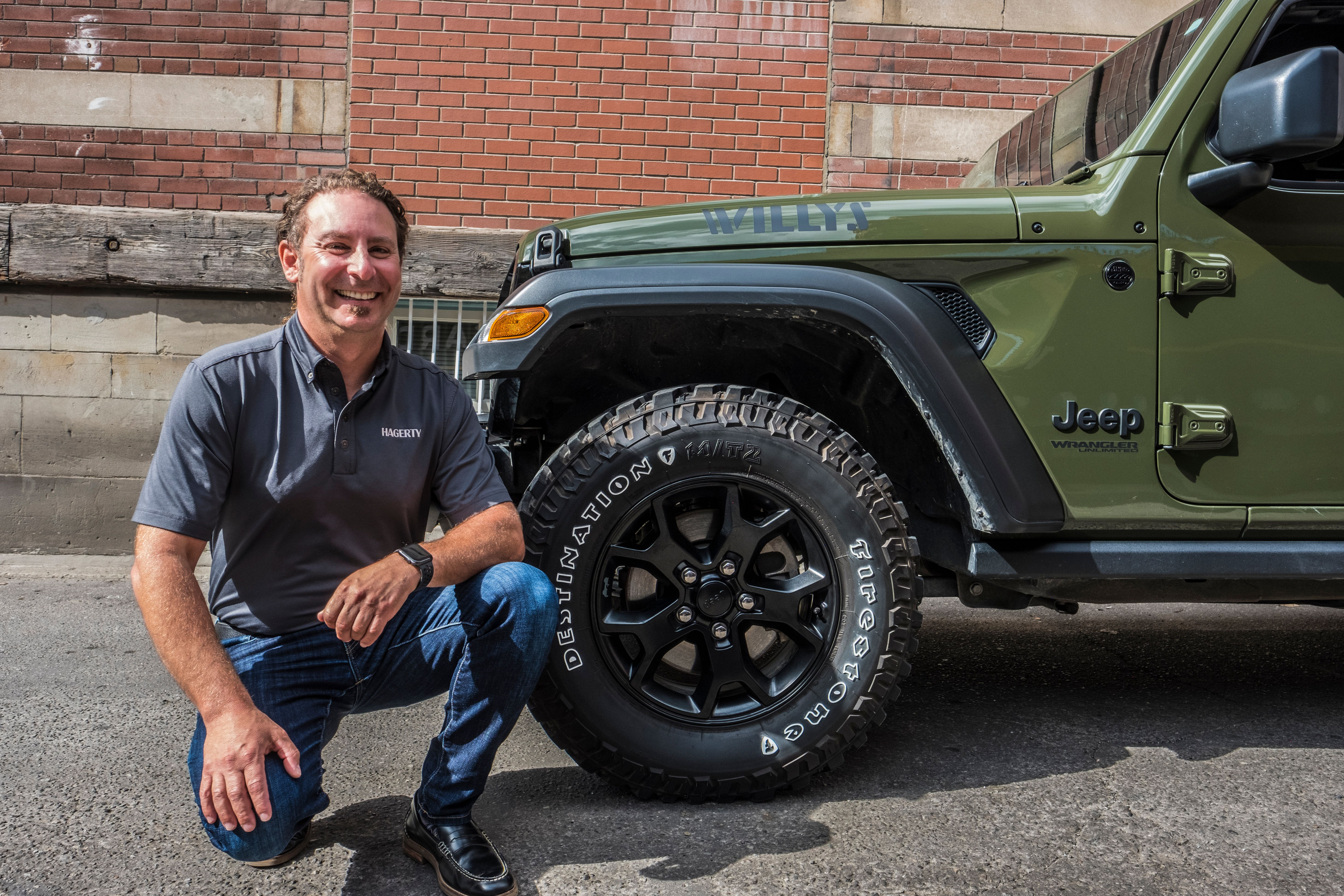 “We like the presence it has on the road: It's a bit of an eyecatcher with the colour and the release badging. But the most interesting thing is the community. So, there's this Jeep Wave which you do as you pass another Jeep. It’s something we had to get used to. It’s funny because we have a Mini Cooper Roadster as well, and if you wave, people think there’s something wrong with you. [Laughs.]

“Once in Creemore, I came to the vehicle and there was a crocheted duck stuck in the door handle. And I was like, ‘what’s this?’ It’s basically a Canadian thing and it means you’ve been ‘ducked,’ and you’re supposed to keep putting a rubber ducky or crocheted duck on other Jeeps [to help spread the Jeep love]. A lot of Jeep owners will buy a bunch and drop them on people's fenders and stuff. It’s kind of neat.”

Both Finkelstein and Copeland love the look of the Willys from the badging to the Sarge Green colour.

“It’s kind of a unique colour,” said Finkelstein. “It’s not crazy showy but it does stand out; it had just come out and wasn't available before that. I also think it’s more like a heritage thing. It's sort of harkens back to the days of the Willys-Overland (producer of military Jeeps), so it gives it a bit more of a military feel.”

“This model is kind of like a mild hybrid. It has a 48-volt electric motor attached to the engine [acting as a starter-generator],” said Finkelstein. “It wasn’t why we bought it, but it has a little more pickup. The auto start on this model is a lot quicker, so when you come to the stoplight, and you put your foot on the brake and the engine shuts off, it just starts up instantly, where there was a bit of a lag with the 2019 Wrangler. And my understanding is that the sort of mild hybrid has something to do to help with that.”

The Wrangler’s easy to remove and install soft top system can be reclined for a convertible-like top.

“Every time I get in the vehicle, regardless of the weather – unless it's raining, I just throw the top down, and it's super easy,” said Finkelstein. “[Laurie’s] absolutely hooked on the Jeep. It's the truckiness of it, how it drives, how it handles, and she loves being able to take the top down and enjoy the sunshine. It’s hard to pry the keys out of her hands.”