In pursuit of the Fast and Furious Z life....How one automotive enthusiast ended up securing and building the head-turning car of his dream

Join the Conversation (0)
Napoleon Torres is a big believer in having a healthy work-life balance. The entrepreneur is the co-founder of Wired Carbon, a business that has been virtual since its inception in 2014.

“I've once read that the newest measurement of success is no longer how many dollars are in your bank account, but how much free time you have,” said Torres. Being able to work remotely means that the company’s employees can apply those recovered commuting hours to time spent with family and enjoying life. For Torres, that translated to having time to pursue his hobby of modifying vehicles.

It also allowed for Torres and his wife to uproot from downtown Toronto and move to a log home with nine acres of land in Madoc. The ample space allowed the amateur mechanic to build a garage that’s equipped with chests of tools, air compressors, and a couple vehicle hoists so that he and his friends could tinker and work on multiple cars simultaneously.

However, Torres has always had an affinity to the Nissan Z lineage – from the Datsun to the twin turbocharged Z32 and its successor 350Zs made famous thanks to “The Fast And Furious: Tokyo Drift.” As a Nissan Maxima owner in the mid-2000s, Torres was involved in Nismo Club, where he was exposed to car culture and developed a soft spot for the Z life.

He tells us why he loves his car.

“[I grew up seeing] cars representing lifestyle and freedom,” said Torres. “As a child you think: If I can get the car, I can go here or there. I can go away for the weekend, to the clubs, on a road trip, or camping. So, vehicles have always been a perception of a unique kind of life which allows you to live various experiences. Since my wife and I don't have kids, it's convenient for us to have those kinds of random and spontaneous adventures whether it be on a motorcycle, in the pickup truck, or jumping into the Z to run out to the city to visit family and friends.

“When I was just starting in the late 1990s, purchasing a vehicle was more for function versus fashion. It had to be drivable, repairable, and affordable. And as the years evolved, I looked primarily for affordability, functionality, and road worthiness. Historically, to buy a Z that checked off all those boxes, was way out of my price range, but with the 2016 [I found], I was finally able to afford the Z of my dreams.

“The Z lineage, from the 350Z to the 370Z, has the VQ engine. That engine has all the features I look for in an engine: it’s balanced, naturally aspirated, and performs very well. Based on information I compiled from car forums and the car community, I focused [my search] on 2016 and newer models because of improved reliability.

“I love the car: I think they did an incredible job with the design – the lines are great, the sound, and its performance. The 370Z also came fully loaded with an Akebono big brake kit, a set of 19-inch forged wheels, and has a six-speed manual transmission.

“But I look at the vehicle as my canvas. It's an extension of my personality and a creative outlet that I love to build and drive. I’ll always be ideating modifications or add-ons, so it’s a work in progress. I've probably spent close to $20,000 parts wise. That doesn’t include any labour since I do it all myself. If I don’t know how to do the work, I learn how to do it.” 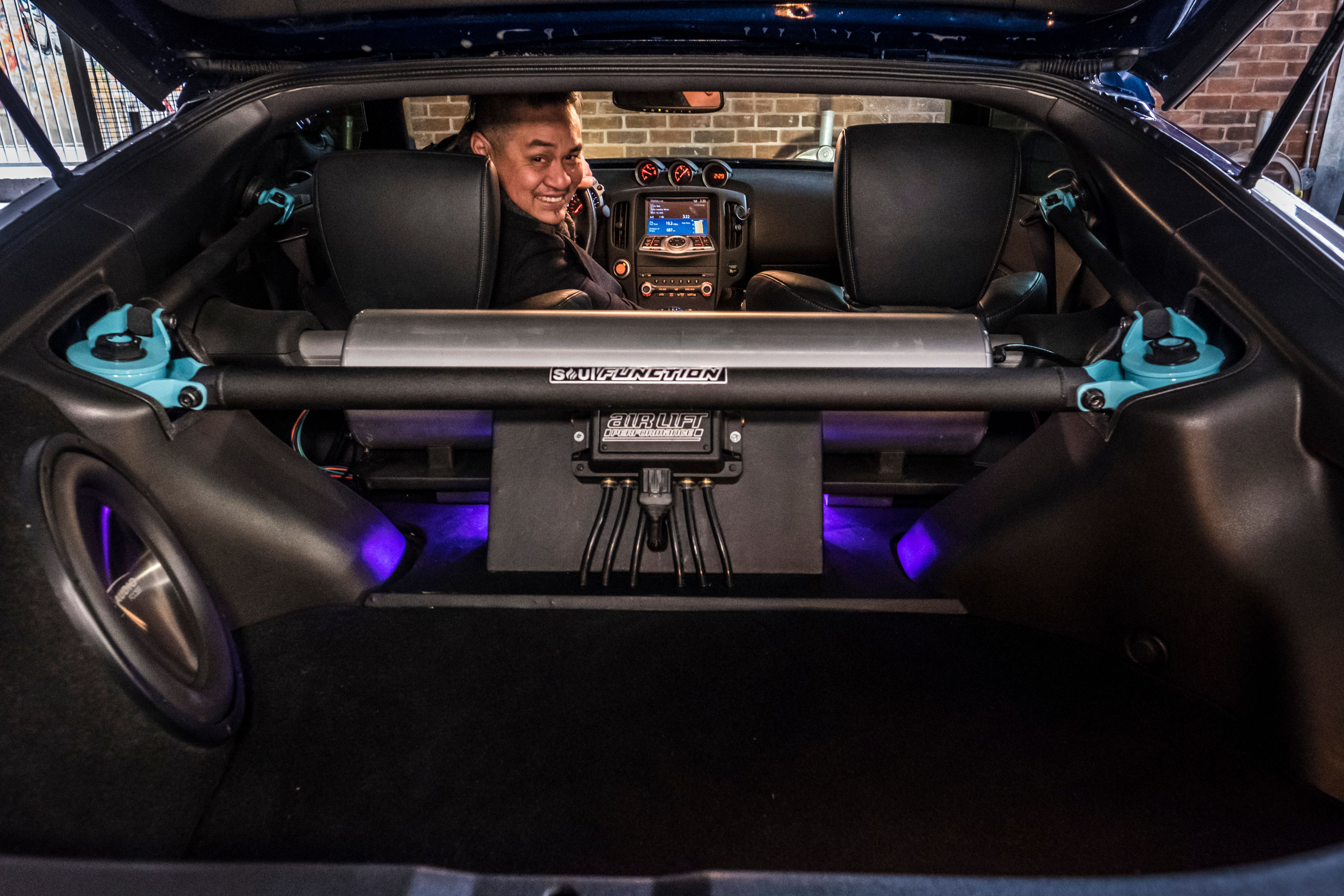 While his father instilled in him an interest and ability to build and fix cars before he was old enough to drive, Torres also credits mechanic Marco Bifolchi from M's Motoring for being his go-to resource with all his car-building needs. To date he has replaced the clutch, the flywheel, and the break master cylinder, amongst a laundry list of other installations.

“For sound and entertainment,” said Torres, “I have an Arc Audio 10-inch subwoofer and added an Android piggyback feature that turns the manufacturer navigation head unit into an Android tablet with the click of a button. I can download any app I want to use in the car, like listening to SiriusXM or DI.FM as long as I have internet service.”

Then there’s the car’s eye-catching exterior. Besides a carbon fibre engine cover and wing, aggressive-looking front bumper and rear window louvers, there is a koi fish sakura livery by Spinnywhoosh Graphic. While Torres applied the vinyl decals on himself, he was aided by his nephews – Matty, 5, and Max, 3 – who picked where the petals would go on the car.

Living up to the “Fast and Furious” title, the car is also equipped with a showy underglow. Those who’ve encountered Torres’ ride in person, have likely seen, and heard, the hiss of his electronically controlled adjustable Air Lift suspension system in action.

“It’s definitely noticeable,” said Torres of his highly modified 370Z. “Some people consider it a show car, but I made sure it's functional – that I can drive it all year round. Yes, it's tricked out, but its still within reason and is street legal. I’m making sure it’s meeting all emission standards and I’m not deleting any safety modules. My Z is 100 per cent safety standards certifiable, which means I can enjoy my car without any hesitation or concerns.

“I don’t track this car. If I'm ever going to track a vehicle, I will build it purposely and have it trailered to the track and trailered home. I do aspire to do that one day if funds allow. I used to do hardcore modifications and took my car to import festivals and everything, but I literally put in one tank of gas for the year. What's the fun in that? Cars are meant to be driven and enjoyed, and I built this one that way.”

“My favourite thing about this car is the focus on the driving experience,” said Torres. “It’s a manual transmission meaning it’s more analogue and there aren’t any major electronic sensors impeding the experience itself. It forces you to be in the moment. Every time I get into my Z, I’m reminded of how you need to practise mindfulness regarding what is happening to you, around you, and because of you. Nothing is as engaging as shifting through the gears, listening to the engine and exhaust for performance feedback, watching the roads for obstacles that are coming your way… I really feel that the Z is a huge contributor to that experience. It’s a true driver’s car.

“It’s also one of the only two-door sports cars you can still get with a manual transmission. I'm a big believer that a manual transmission enhances the [driving] experience: it may not necessarily be faster [than an automatic], but I will enjoy the drive getting there.”


“I love my air ride,” said Torres of his electronically controlled air suspension system. “It adjusts dynamically to ensure the car is always running level. As soon as I use it, the air lets out with a hiss, and then the whole car drops right down to the ground.

“I love the ability to drive low and then when I get to a mall with a speed bump, I can lift it to clear the speed bump, then drop right back down. There’s no scratching, and no more bottoming out on speed bumps or driveways. When I attend fundraising car shows, I usually end up taking a trophy, and everyone jokes that it’s because my air ride is the ultimate car show cheat code. [Laughs]”


“I love my cheesy ‘90s underglow. [Laughs] It can be any color. It’s violet right now to complement the blue paint colour,” said Torres of his aftermarket ground effect lighting that’s attached to the underside of the chassis. “You see it best at night – with the decal, the exhaust, the car being low on air ride, and then it's got this bright violet underglow everywhere.”