The fifth-generation Grand Cherokee is a gorgeous show-stopper.

Join the Conversation (0)
PORT HOPE, ON -  is a lovely little town about 100 kilometres east of the Big Smoke, also known as Toronto.

Founded in 1793 by United Empire Loyalists (and called “Toronto” for a short time after the War of 1912 – I kid you not), it officially became a town in 1834 and, because of the efforts of local conservationists, its downtown looks about the same today as it did back then.

Which makes it the perfect platform to film scenes for period TV dramas like CBC’s Murdoch Mysteries, which has happened.

Port Hope has a lot of things going for it, besides its architecture. Vincent Massey, the first Canadian-born governor-general, was from there. Farley Mowat, the author and pre-Greta Thunberg eco-warrior, wrote his best books while living there. And the Ganaraska River, which meanders through town and periodically overflows its banks, is the site of a 10-kilometre riverboat race every spring called “Float your Fanny down the Ganny.”

Before the newspaper business got serious, a Toronto tradition on race weekends was for editors and reporters to close the Press Club shortly after midnight Friday and board a rented school bus for the short hop to Port Hope where the rest of the night would be spent building a flotation device that the revellers, led by the late columnist Paul Rimstead, hoped would get them to the finish line without a) overturning or b) flat-out sinking.

They seldom made it all the way; and annual April bouts of pneumonia were not uncommon.

I was in Port Hope last week to test drive the new 2022 Jeep Grand Cherokee, which is already in showrooms but hadn’t yet been given the once-over by Canadian automotive writers. We needed a base, so a dozen or so, including me, stayed in a place that had started life back in the 19th Century as a bank but is now called the Hotel Carlyle and Restaurant.

We were fussed over by Elise Herman, a member of the family that owns it, and when I asked for a shaker of salt at dinner one night, which is usually a no-no in houses of fine dining, she produced one without delay.  In fact, when she brought me my bacon and eggs the following morning, she also brought the salt without me asking for it – an attention to detail that merits reporting.

But down to business. 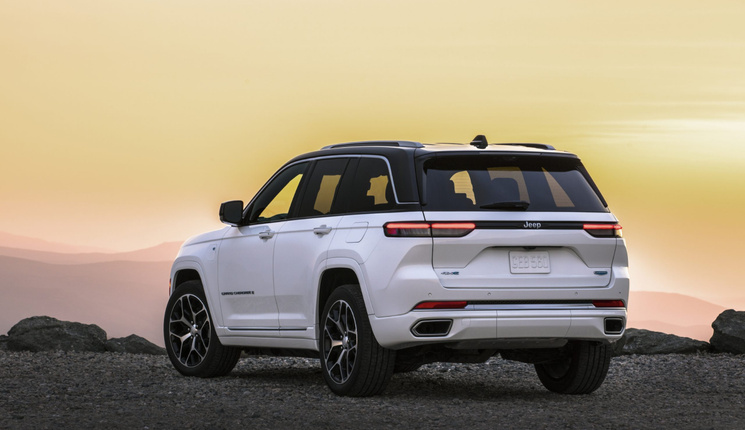 I drove the V8 for the off-road portion of the test and while it performed flawlessly and the automobile proved itself capable of going just about anywhere, and through just about everything, I don’t own a northern Ontario cottage that would require me to burrow through muskeg to reach, so there really isn’t much use for it.

And I know a lot of people who own a lot of cars and not one of them will drive a beautiful vehicle like this one into a forest or through a stream just for the hell of it. I suppose knowing that it can perform this way – if absolutely necessary – is good for your peace of mind but other than that . . .

Oh, before I forget: both are twinned with an eight-speed automatic transmission.

So, what do you get for your money?

There is a load of new safety features that are now standard on all Grand Cherokee models, such as active-lane management. Options like driver-assist systems and 360-degree surround view and night vision cameras are available.

The Trailhawk model features low-range Selec-Speed Control (which lets you set the low speed to bulldoze through the muskeg I mentioned earlier), Quadra-Lift air suspension (75 mm above normal ride height, to drive over those boulders you should happen to come across but that can also be used to lower the chassis, thus making it easier to get in and out of the car), skid plates, red tow hooks and class-exclusive sway bar disconnect. 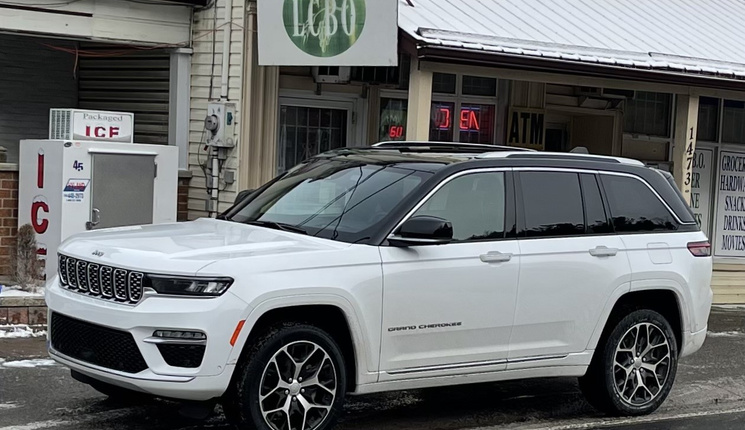 The Summit Reserve adds 21-inch wheels and standard premium amenities, including a 950-watt, 19-speaker McIntosh audio sound system. Next-generation technologies include Uconnect 5 with standard wireless Apple CarPlay and Android Auto, windshield Head-up Display (HUD) and digital rear-view mirror (which I don’t like; shifting your eyes from the “normal” view from your side mirror to the digital rear-view mirror is confusing Or, at least, I found it to be).

My wife, who loves amenities like the lumbar and seat back massage, is always complaining to me about what she calls a lack of passenger friendliness in a lot of the cars and light trucks I borrow from manufacturers to test. She admires many of the features on offer but points out, often correctly, that only the driver can activate certain technologies.

Now, although she wasn’t along for this drive, I can tell you that she would really like what’s available for the front-seat passenger in some models of the Grand Cherokee. We are all familiar with the now-obligatory two digital screens found in the front seats of just about all automobiles on sale in North America. There is the readout panel behind the steering wheel (speed, fuel gauge and, etc.) and the centre console, where most of the infotainment technology can be found.

But some upper-trim models have a third 10-inch digital screen for the front-seat passenger to enjoy, independent of the driver. Situated in front of the passenger, but tilted so as not to distract the driver, the passenger can download movies from Amazon Fire TV, stream videos, play games, listen to music and get information in case the driver (me) gets us lost and refuses to stop and ask directions. She can also control what is on the two 10-inch screens available to passengers in the second row of seats.

Okay, let’s wrap up a few things before we go for a ride:

So last Thursday morning, off I went in the V6 to find out whether all that had been promised really ticked. The cockpit is comfy, getting everything aligned and ready to go (mirrors positioned, etc.) was easy and the ride through town on the way to north of the 401 was smooth, all things considered. I say “all things considered” because the roads in small-town Ontario (and even big city Ontario. sometimes) can often be on the bumpy side.

I had never driven through the part of Ontario I was seeing last Thursday and was surprised it was so hilly. But the scenery was lovely and every now and again there’d be a surprise, like the field containing about a dozen donkeys. The car, meantime, was a joy to drive. The interior was quiet (except when a song I liked came on the radio and I cranked up the volume) and there was very little – if any – vibration.

When I tramped it, there was great throttle response and the steering was steady and the handling precise. I hit the brakes and the vehicle stopped, straight as an arrow. I really liked that car – and I am not alone. It is the most luxurious SUV in its class, most awarded SUV and the No. 1 selling (seven-million plus) full-size SUV. And like Ford in 2015, when it took a chance with its all-aluminum body, Jeep has produced this fifth generation with an all-new exterior design and a new interior.

Lunch was in Port Perry at a place called the Piano Café (it was packed). The downtown was reminiscent of the one in Port Hope and, although I’ve been to Port Perry several times, it was the first time I’d seen it. I know where the boat ramp into Lake Scugog is but not City Hall. Go figure. So, the next time you go fishing there, pop into the Piano Café for homemade tomato soup and lobster mac ‘n cheese. You’ll thank me.

I told you about the off-road portion of the test earlier. I still don’t get it but everybody does it so there must be a demand. I drove the V8 from Port Perry to Canadian Tire Motorsport Park but, as I mentioned, the V6 is enough for a comfortable ride. But suit yourself.

Finally, the Jeep Wave customer service program comes standard with all new Grand Cherokee models and includes premium benefits such as worry-free maintenance (including a bunch of free oil changes), 24/7 roadside assistance and dedicated owner support. Which sounds like a good deal.

To go with a good car. 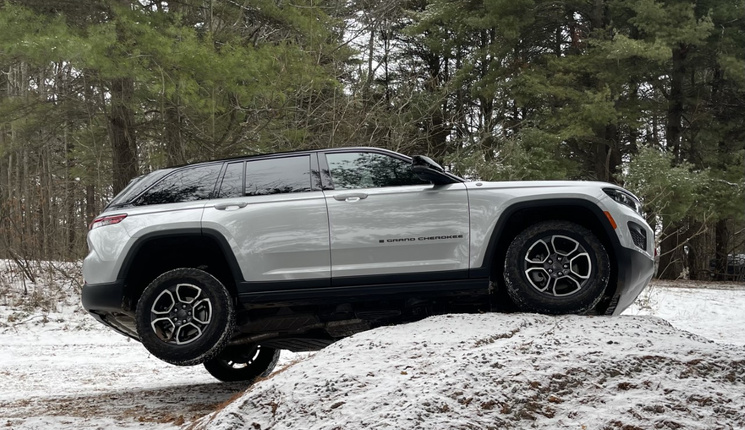