Join the Conversation (0)
With only one-hundred kilometres logged since fully charged, I reversed the 2022 Volvo XC40 Recharge back into its spot at Volvo’s HQ. The e-juice gauge was showing 45% remaining and I had an estimated range-to-empty of another hundred. Given that the first century took 55% to eclipse, some elementary school maths tells me that Volvo’s computer may be a bit optimistic. Not as optimistic as the Worldwide Harmonised Light Vehicles Test Procedure (WLPT) or Natural Resources Canada (NRCan), mind you: they peg the XC40 Recharge at being able to cover up to 418 km and 359 km, respectively, on a single charge.

Of course that’s under ideal conditions. In the real-cold-world of this Canadian winter, my loaner would be lucky to log half of that… 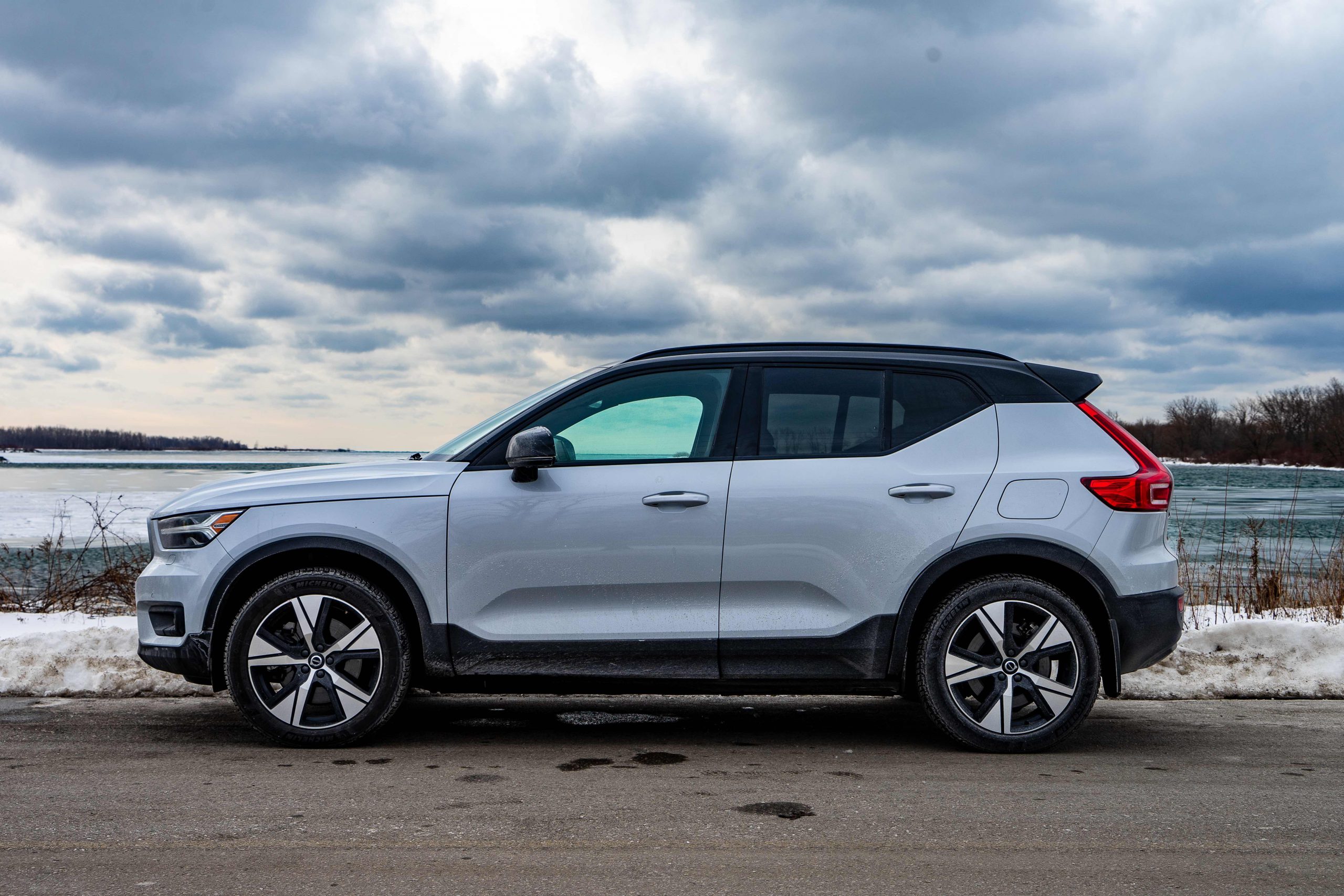 Unlike a good chunk of the battery electric vehicles popping up and in the pipeline, the 2022 Volvo XC40 Recharge doesn’t differentiate itself visually. There’s nothing futuristic about its appearance. No super slippery aerodynamic treatments, snazzy alloys or funky lighting. Aside from its lack of a traditional grill, the Recharge looks exactly like a petrol-powered XC40. And that’s no bad thing.

The XC40 Recharge is a handsome and compact crossover. Bodywork creases and flairs are tastefully executed to accentuate an overall minimalist and boxy shape. Short overhangs and the climbing C/D-pillar treatment give it an air of hot-hatch in profile while from dead-on, Volvo’s Mjolnir-inspired headlights look just as elegant here as anywhere else. In my eyes, the XC40 is arguably one of the most tastefully sculpted vehicles in its class.

The interiors of modern Volvos are always a nice place to be. The principles of Scandinavian minimalism (simplicity, comfort, and practicality) are applied to near perfection and the XC40 Recharge is no different. The heated, power-adjustable seats are extremely comfortable and feature a mix of synthetic textiles that mimic the look and feel of leather and Alcantara. The heated steering wheel ($100) and shifter are also wrapped in the same Microtech textile, meaning there is no leather at all in this luxury cute-ute. 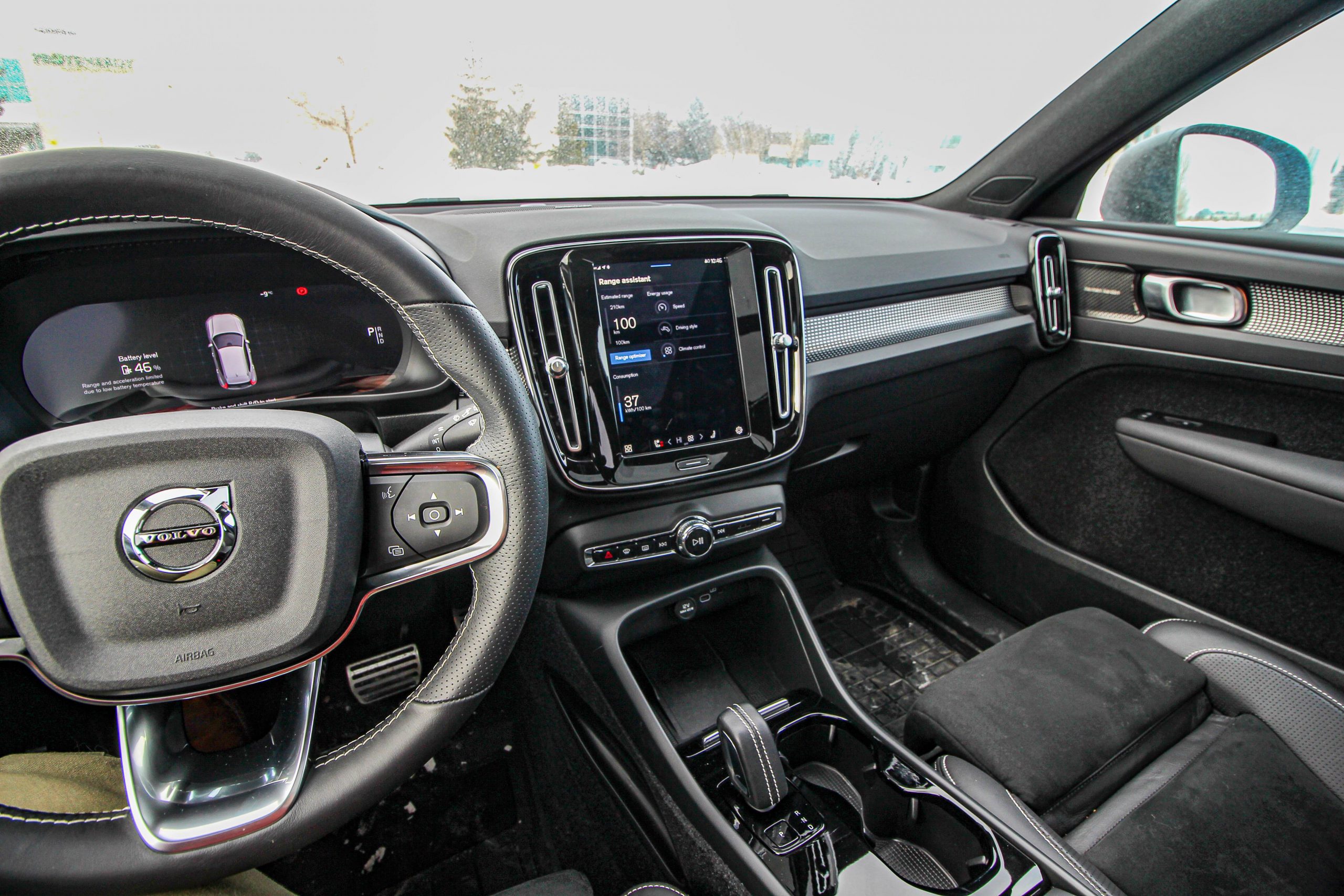 A large, panoramic glass roof brightens up an overall dark cabin. Brushed aluminum is put to good use for accents but I could do without the patterned styling of the dash trim. A simple, solid stripe of brushed silver or the Grey Ash used in other Volvo models would make for a cleaner overall appearance. Regardless, the feel from all of the touchpoints is premium and there is plenty of storage and a wireless charging pad, too. However, you will be cursed with a barrage of smudged fingerprints on the piano black centre stack and infotainment surround – and you will need to poke and tap quite a bit in this space because Volvo’s 9-inch touch screen controls damned near everything.

Outside of some quibbles over a lack of physical buttons for common-use items like HVAC and seat heaters, the Android Automotive operating system is responsive and a clear step up from the previous Sensus system. Navigating through the menus is intuitive and the most important settings are only a tap or two away. The system also integrates Google Assistant for voice control and Google Maps for navigation, which is a very welcome addition. The maps system even has a baked-in prompt to find the nearest charging station which, as you can imagine, is quite handy.

“Fueled” by a 78 kWh battery, the XC40 Recharge uses the same twin synchronous, permanent magnet motor set-up found in the Polestar 2. That means this cute-ute can boogie. With 402 horsepower and 486 pound-feet of torque being channelled to all four wheels, accelerating in the XC40 Recharge is instantaneous. Volvo quotes a 0-100 km/h time of 4.9 seconds – almost a full second quicker than a Ferrari Testarossa – and I have no reason to doubt them. Even while sporting snow tires on frosty streets, the XC40 gets up and goes whenever you want it to. My only complaint here is that the “throttle” isn’t as aggressive as I’d like. If you’re at all familiar, it feels a lot like trying to motivate an early aughts Mercedes; if you really want to hustle, you need to plant your right foot with authority. It would be nice to see a “sport” mode of some sort made available to really let drivers exploit the potential on tap. Volvo, If you’re reading this: let’s make that an over-the-air update priority, ok? 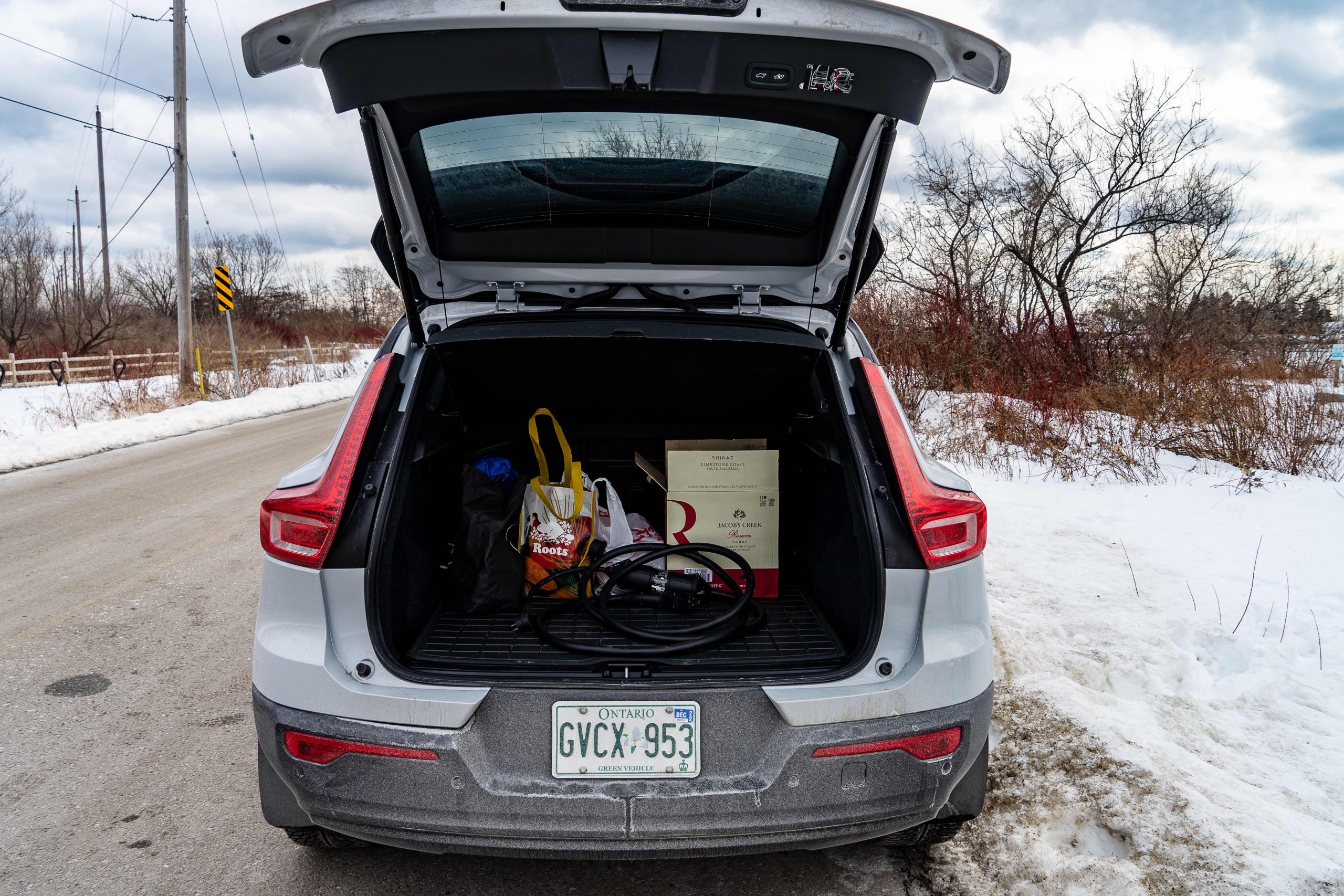 Battery placement is low, so the XC40 handles quite well. There is still body roll – this is a 2,200kg vehicle, after all – but it feels flatter and more confident in a corner than you may guess. With the steering toggled to its heavy setting, the feel is sporty, decently communicative but still a little numb for the performance on tap. Combined with its diminutive dimensions, the performance characteristics of XC40 Recharge make it a zippy little thing that easily fits in just about anywhere. Add in the fact there are 1,387-litres of cargo space and the XC40 is extremely well suited to an urban environment.

But back to that range issue…

I didn’t plug the XC40 Recharge in at all. Not once. I wanted to see if I could treat the XC40 Recharge like my normal vehicle, without any major disruptions to my routine. I don’t fill up my Outback before bedding down every night, so I felt no need to recharge the Recharge.

I had the all-electric cute-ute for roughly ninety-six hours of the most wintery weather Toronto has seen in ages. It was both snowy and, at times, extremely cold, so I didn’t expect any legitimate hypermiling returns. It made a grocery run, a couple of take-out trips to support shuttered restaurants my wife and I both love and other random day-to-day tasks. And for that, it performed flawlessly. 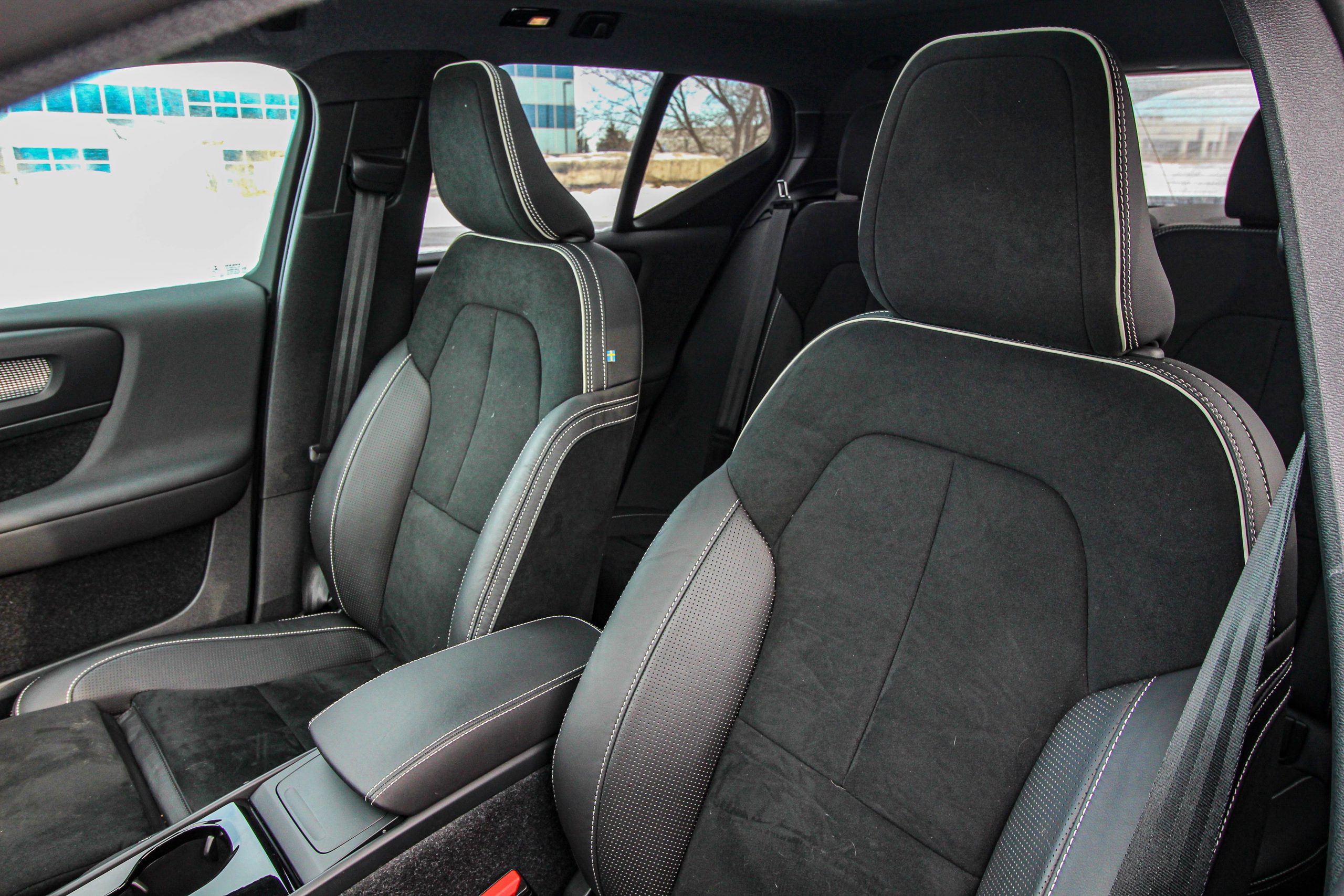 But I didn’t take the XC40 Recharge out for what would constitute a long or punishing drive. It barely saw any real highway time either. After watching how quickly the energy from that battery depleted while cruising around the city with the seat and wheel heaters going and the defrosters blowing, range anxiety became a real thing: I didn’t want to risk being stranded somewhere, either out of juice or out of range to rescue myself. In these conditions, it might not even make it to my cottage on a single charge, which is something my Outback shrugs off in barely a quarter tank.

Of course, that’s the hurdle for all battery electric vehicles (BEV), not just this Volvo. They’re competing with the comfort and convenience of over a century’s worth of development and investment.

So, the rub is that while the XC40 Recharge is an admirable urban performer and a vehicle I’d strongly recommend to anyone contemplating making the move to electric, I don’t think that it or any BEV could be someone's only vehicle. Real-world range just isn’t where it needs to be. Certainly not in the winter. At least not yet.