Join the Conversation (0)
Despite not being an obvious competitor, it’s hard to shake the feeling that Toyota would very much like you to think of the Camry XSE V6 TRD as a bargain Honda Civic Type R.

Both cars are based on front-wheel drive Japanese sedans. Both cars feature red-accented interiors — most prominently, red seat belts. Both cars have modified exteriors with tuner-inspired wings, body kits and rims. Both cars make just over 300 horsepower. And both use badges to harken back to their respective manufacturers' racing heritage (which are also red in colour).

Even when you start the Camry TRD, you’re first greeted with a bright red, digital “R” in the gauge cluster-mounted info-screen before the “T” and “D '' illuminate to spell ''T-R-D”. The simple act of getting into and starting the car is suspect of Toyota’s intentions.

However, Toyota might actually be on to something here, because starting at just under $37,000, a Camry XSE V6 TRD will probably cost you at least $15,000 less to purchase than a new (well, last year’s model anyway) Honda Civic Type R. And that, on paper, does sound like a real bargain. 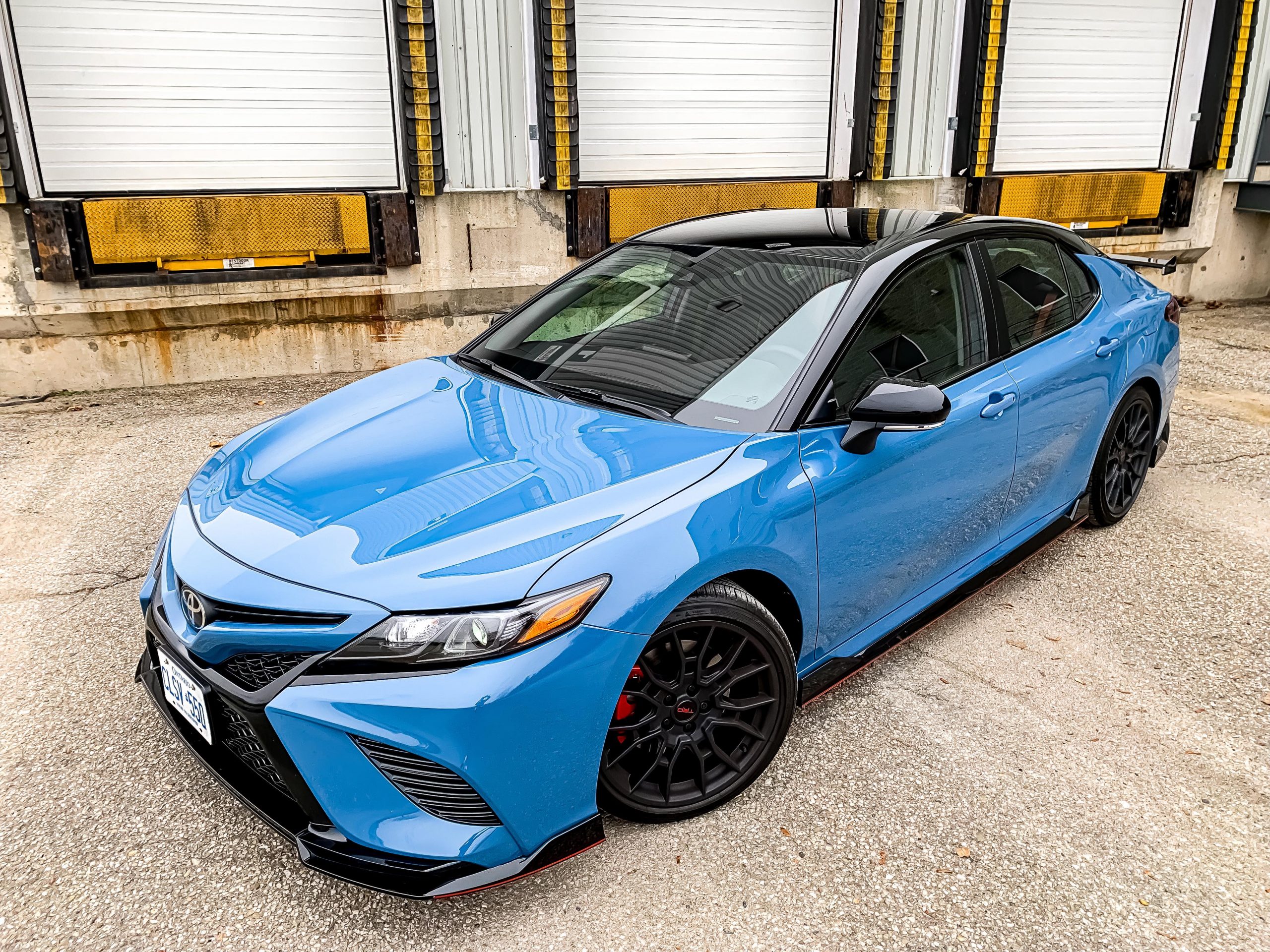 While the Type R and TRD achieve similar mileage, the Camry’s naturally aspirated V6 runs on regular gas. Its powertrain is also shared across multiple models, so it should theoretically run lower on maintenance costs. And because it’s a Camry, the insurance company is less likely to throw the book at you.

It’s not as if the Camry skimps on features, either.

Toyota’s “Safety Sense 2.5+” system is present throughout the Camry lineup and features a ​pre-collision system with pedestrian and bicycle detection (a godsend in the city), as well as lane departure alert and steering assist.

XSE trimmed models feature full-speed range dynamic radar cruise control and lane tracing assist, which, while perhaps still not quite as seamless as some competitors, are fairly unobtrusive during normal driving. 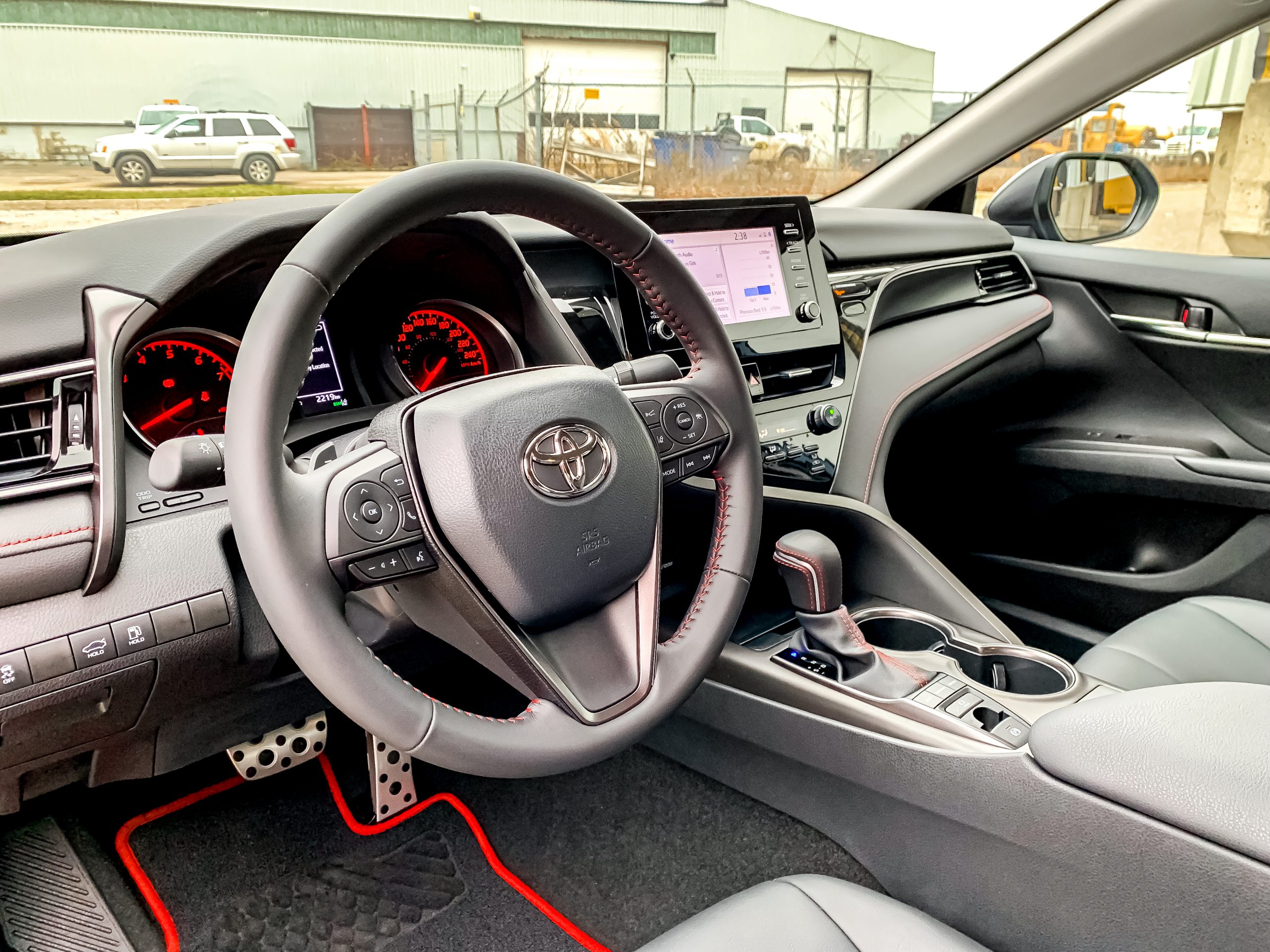 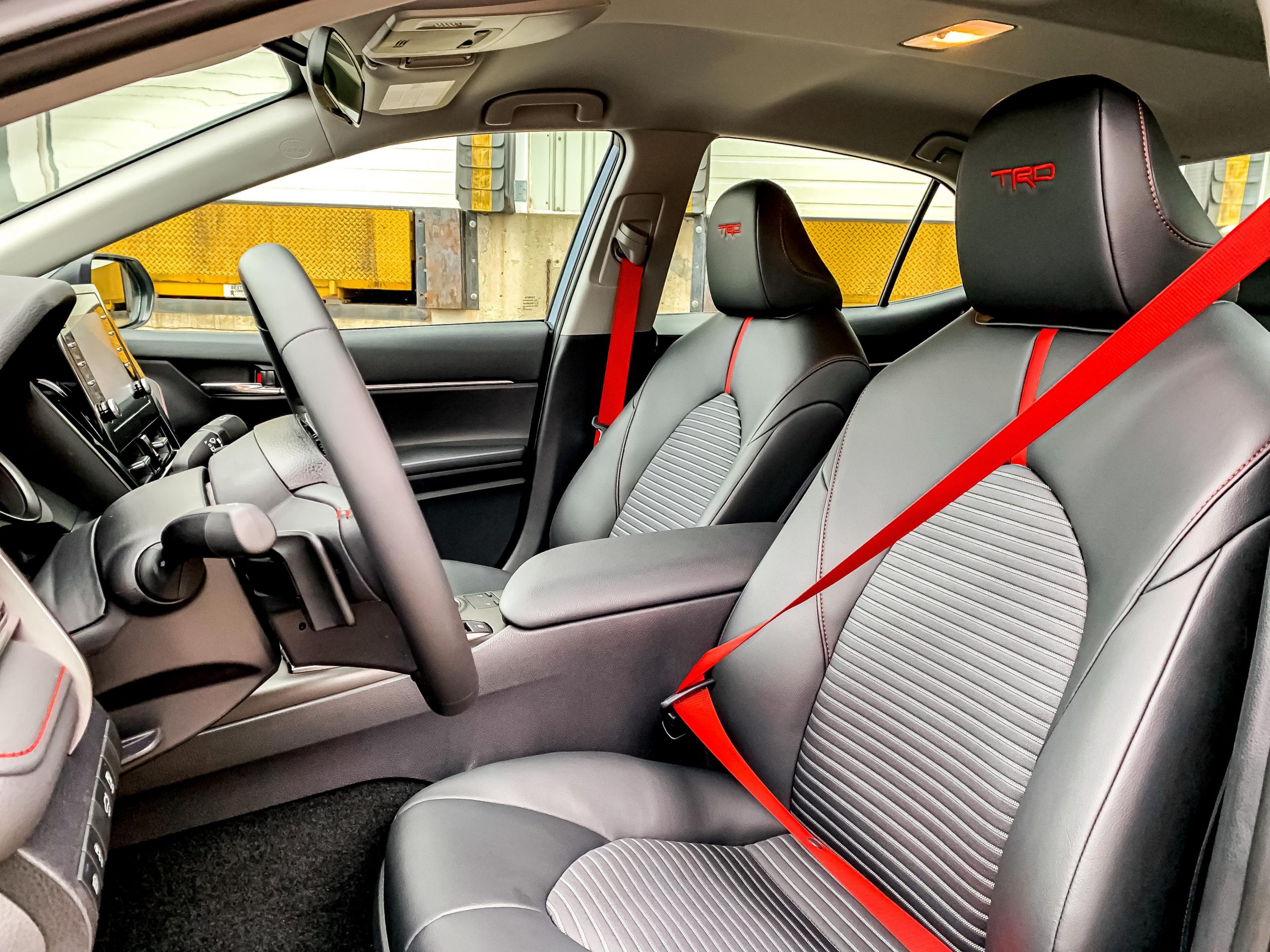 Toyota's Entune 3.0 touchscreen infotainment system is also standard across the Camry lineup. The 9-inch touch screen remains easy to navigate and use in real time — although its general design is beginning to feel a little dated. The UI looks a little like a bland PowerPoint presentation for an accounting firm’s quarterly earnings. Luckily, the system is Apple CarPlay and Android Auto compatible.

Opting for the TRD package means you get a tuner-look body kit, complete with the black, edgy rear spoiler. You also get a pair of exhaust tips connected to a more free-flowing cat-back exhaust, which does mildly enhance the engine note. It’s nothing special sounding, but it is something. 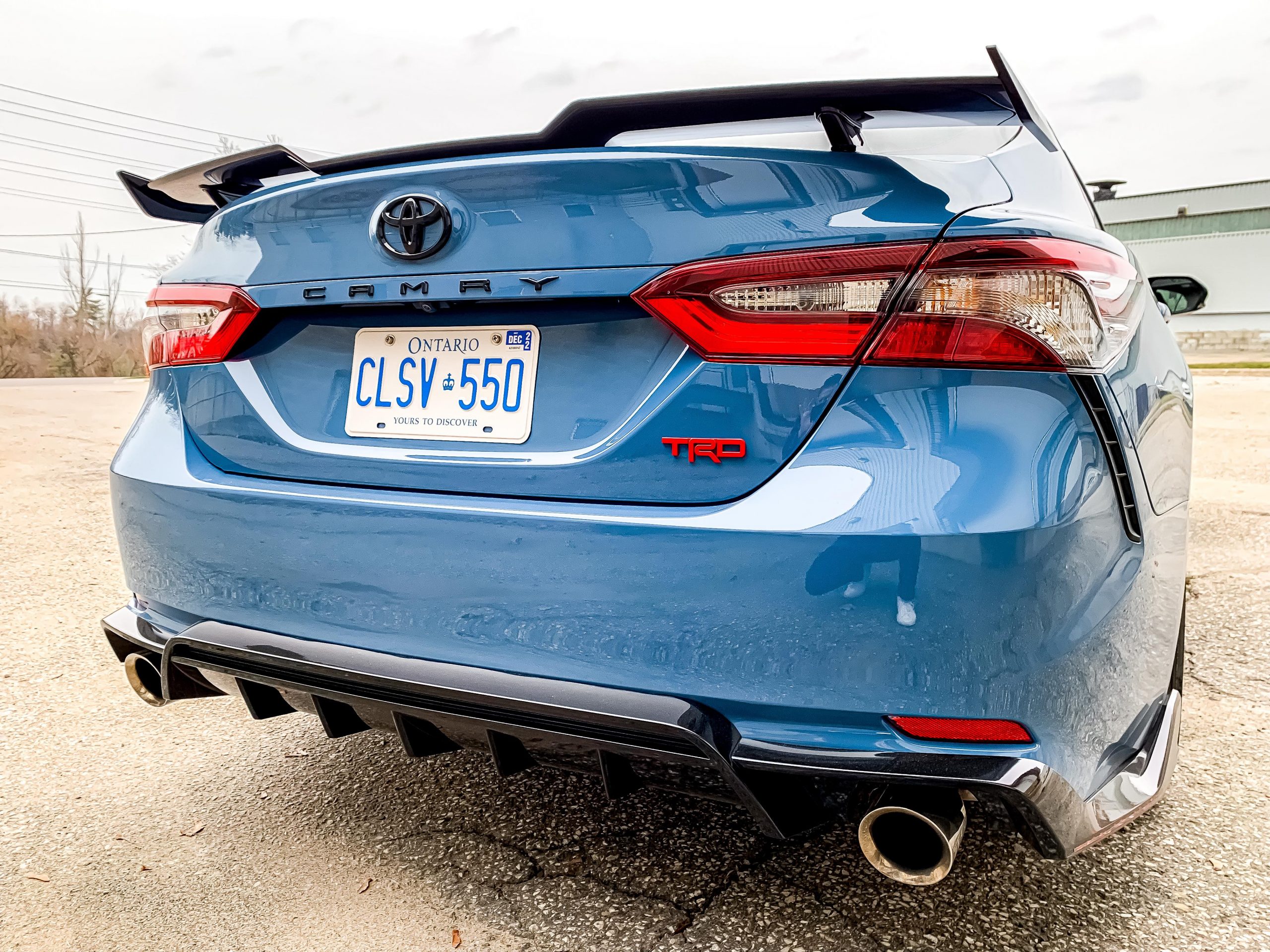 Overall, the Camry XSE V6 TRD is undeniably more fun and engaging to drive than anything else in the Camry lineup. The car’s lower stance made it feel purposeful and planted while scything through backroads. Understeer — which is so often characteristic of big, front-wheel drive sedans like the Camry — was minimal enough as to be unnoticeable on the street.

However, I was perhaps most surprised by how well the XSR V6 TRD put its 301 horsepower down to the ground. While nothing to write home about from a dig, the car can be a real bully while cruising on the highway. Thanks to the Camry TRD’s loud looks, I expected to be mobbed by every Audi S4 and Dodge Charger I came across… but I just wasn’t. The Camry had no problem keeping pace.

So is the Toyota Camry TRD really $15,000 less car than a Honda Civic Type R?

Nevermind the boring stuff like how much better Honda’s infotainment and safety system are. Nevermind the quality of the interiors, where the Camry has all the equity and feel of a McDonald’s ball pit and the Type R features the greatest sports seats and gear shifter ever. The Type R’s real ace in the hole, the reason it's a $15,000 premium over the Camry TRD (if not more after dealer markup), is the driving experience.

It’s not enough to have wings and rims and 300 horsepower. You need a rev-happy engine. You need a clutch pedal. You need whatever witchcraft and black magic Honda worked with the Type R’s suspension and chassis to give a useless driver like me wholly undeserved levels of cornering confidence. 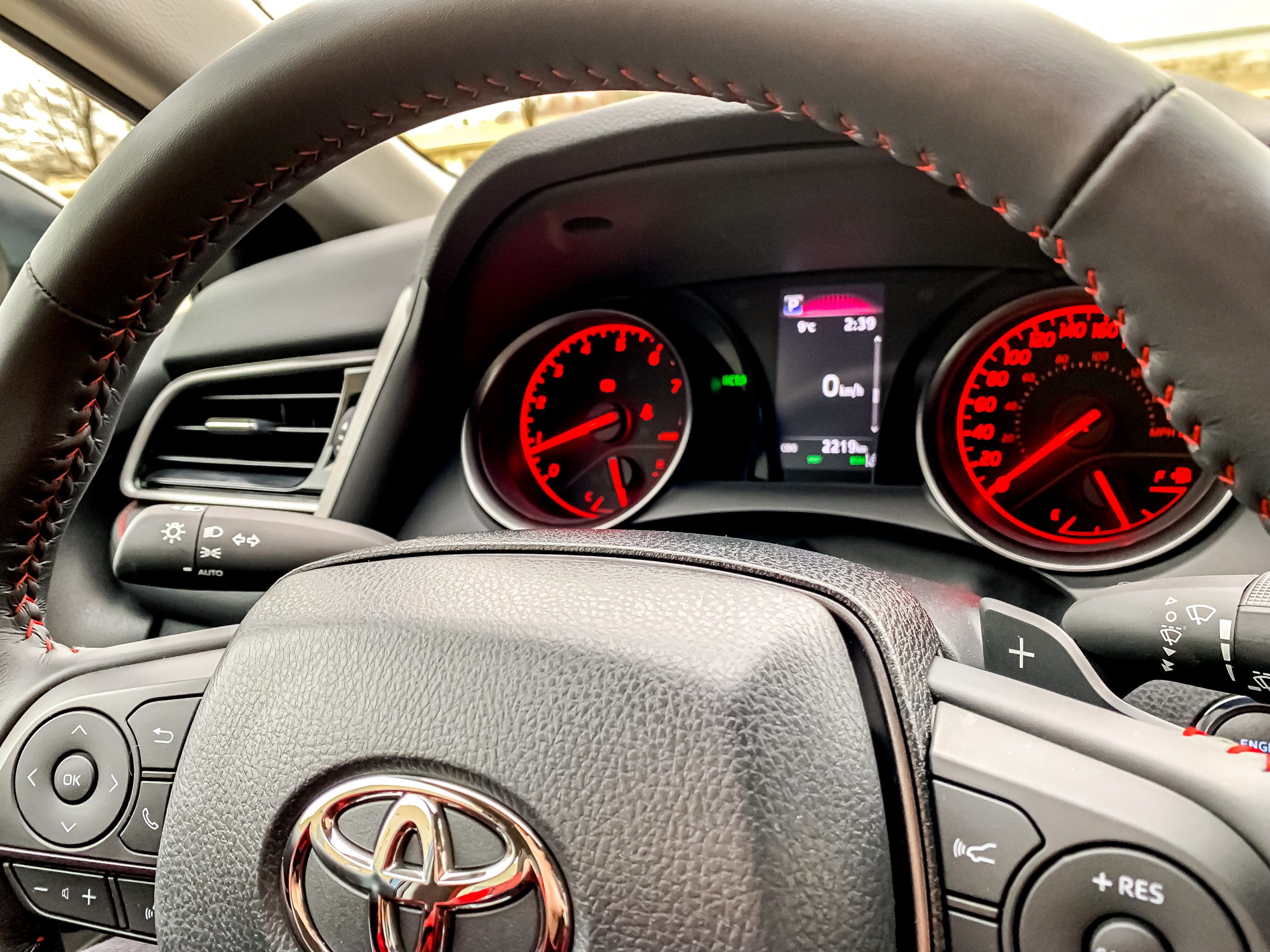 To be a worthy sports car (or specifically in this case, sports sedan) the driver needs to feel connected to the machine through as many engagement points as possible. The TRD package ultimately fails to create those engagement points and elevate the Camry to a level higher than that of just a midsize, economy sedan.

Is the Camry TRD surprisingly capable? Even more capable than its competitive price would suggest? Absolutely. But I never really felt like I wanted to keep driving it. I didn’t look for excuses to drive it. The car does not turn the simple act of going for a drive into a meditative and rewarding experience. That’s what the extra $15,000 you spend on a Type R buys you. Dopamine.

The Camry TRD feels like it’s trying to make that same kind of value proposition to consumers as the Type R, but at a cost. Like fast fashion brands imitating the latest designer trends, the result is a product that is a shadow of the real thing — despite surface appearances.

Don’t get me wrong, I’m not calling the Camry TRD a knock-off watch like I did the Kia Stinger. It’s nowhere near that level of egregious, soulless and cynical imitation.

Toyota is adding a little touch of hot sauce to an otherwise bland dish, and some credit is deserved for attempting to breathe some fun into the Camry lineup. 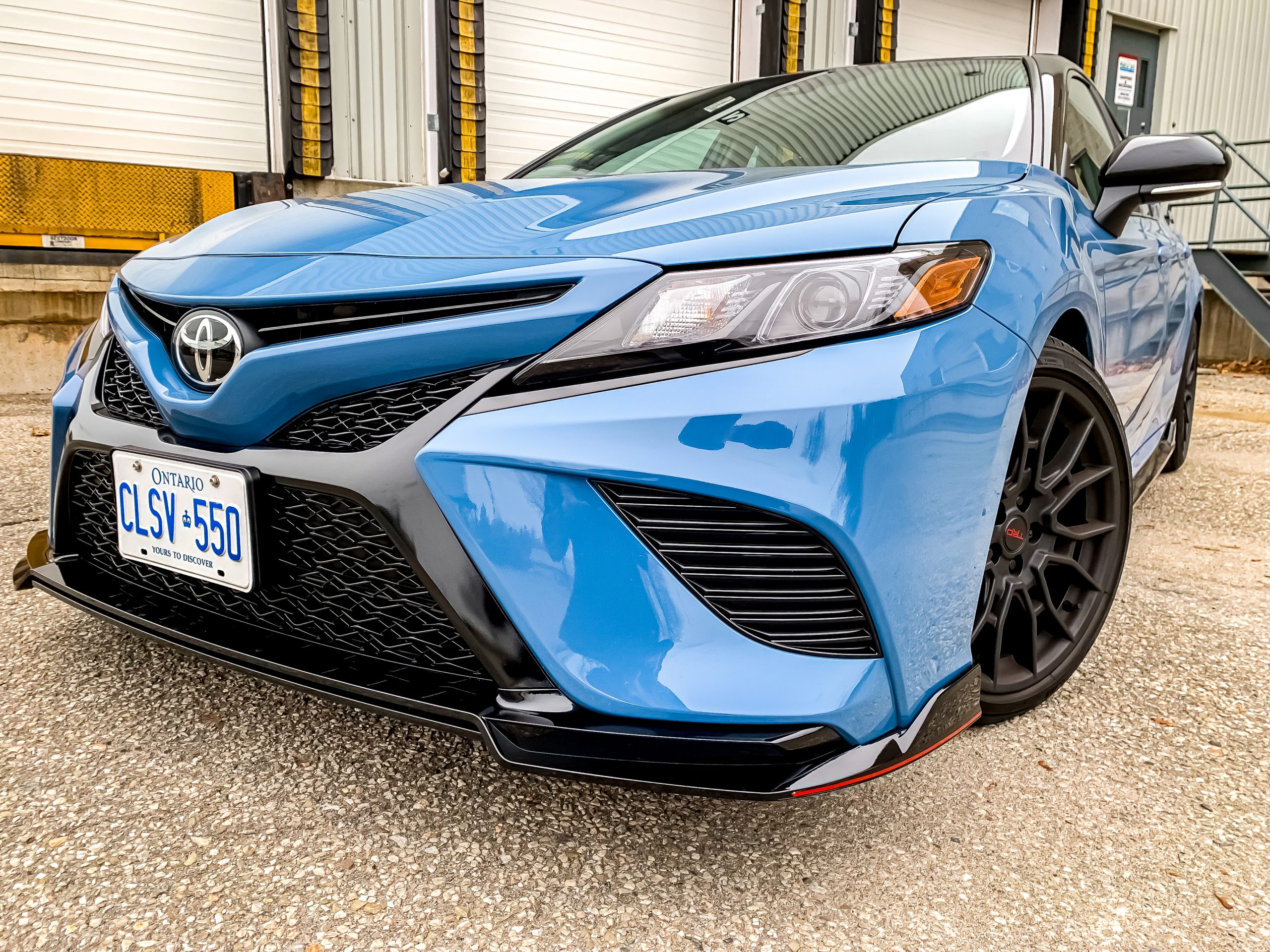 But if what you want is real driving thrills, getting a Camry TRD is sort of like asking for a new MacBook for Christmas and getting a Dell laptop instead. A Dell is fine. It’s essentially the same on paper as a MacBook. But nobody really wants a Dell. Because a MacBook is a much better experience. A Dell is a compromise. And that’s what the Camry TRD really is. A compromise.

Which is not to say that, at times, we don’t need to compromise.

The Camry TRD is, for example, probably the best new car for a (lucky) car-loving college student. It’s fun and powerful and exciting enough, while allowing said student’s parents, insurance company and wallet to chill out.

If you’re in your early 20s and are biting the back of your hand for a Type R or maybe even a BMW 3-series that is just out of reach, go with a Camry TRD. You’ll be glad you did.

But if what you’re after is the real McCoy, accept no substitutions.