Nissan's new Frontier is a winner.

Join the Conversation (0)
MONTEBELLO, Que. – One time, many years ago, I got on an elevator at the five-star Ritz-Carleton Hotel in downtown Montreal (don’t ask) and there was another person already on it. It was early in the day, so I wasn’t paying much attention until the sound of his heavy breathing made me turn around. It was the late Tony Randall. He had a cold, he said.

I’d congratulated him on becoming a father at age 77 and told him that my latest, born when I was 55, was crawling around in a room upstairs. I then asked him what he was doing in Montreal, seeing as it was Canadian Grand Prix time.

“No racing for me,” he said. “I’ve got a gig. Not many people know this, but Montreal is the dubbing capital of the world. I come here half-a-dozen times a year for work.”

I thought of Tony Randall, and our conversation, last week when I checked into the Fairmont Chateau Montebello to learn all about the brand-new 2022 midsize Nissan Frontier and to take it for a drive. The first thing I did when I got into my room, as I always do, is to turn on my TV. There, in all its glory, was Murdoch Mysteries – in French. (Inspector William Murdoch – Yannick Bisson – takes Dr. Julia Ogden – Helen Joy – into his arms and says, “Je t’aime, Julia.”) Next channel up featured The Simpsons, also in French. And so-on. Watching those programs can help everybody learn French, which is a bee I’ve currently got in my bonnet. It beats Berlitz, that’s for sure.

In the words of Nissan Canada president Steve Milette, it took about 14 years for the ’22 Frontier to be constructed and delivered – to dealers in the U.S. And the truck they got was simply a brand-new engine in a 2005 body. Canada lucked out. Because of COVID (among other things) we had to wait an additional two years for our Frontier, but everything we got was new – the engine, the design, the works.

That engine is a powerful 3.8-litre V6 that makes 301 hp and 281 lb-ft of torque. It’s mated to a nine-speed automatic transmission; four-wheel drive is standard. Fuel economy runs to 13.7 L/100 km in the city; 10.6 on the highway; and 12.3 combined. It has a maximum payload of 1,439 pounds and a maximum towing capacity of 6,490 pounds. It has (standard on all trims) hill-start assist and standard hill-descent control for those off-road moments when some extra oomph is required.

The redesigned truck – it has LED headlights fore and aft – looks like a middleweight fighter. It sports broad shoulders and chiseled hips that make it look like a hog butcher but is able to fit into downtown parking spaces without difficulty on weekdays (bad news for the anti-pickup truck crowd) and to haul a load of lumber to the cottage on weekends or just home with material for a backyard deck with ease. All trims have beds that are six feet long except the Pro-4X, which has five feet. 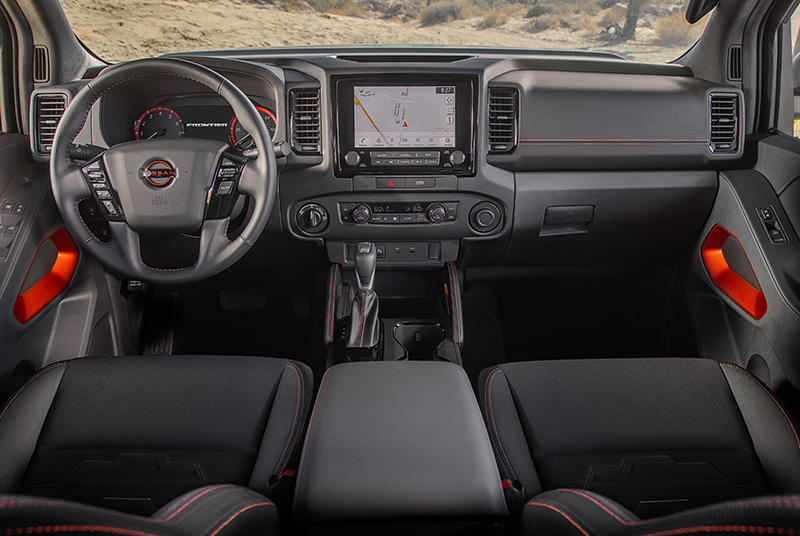 This new truck has improved ride and handling due to a larger front stabilizer bar and a new rear bar. New hydraulic cab mounts reduce road vibration by 80 per cent, the company says. The vehicle has a new hydraulic rack-and-pinion steering gear, an additional steering wheel damper (which really smooths out bumpy roads) and an increase in the steering wheel ratio of 16 per cent. That is a lot of attention paid to making the driving experience more comfortable.

Talking about the driving experience, we now move inside the vehicle, which is my favourite part of any review, mainly because this is where drivers spend all their time: inside – which, in this case, is all-new.

The touchscreen display is nine inches in width and there is a new seven-inch Advanced Driver Assist display above the steering wheel. The lights behind the instrument panels are strong and beam-like, making them much easier to read during daylight hours and particularly at night.

Safety-wise, Nissan has always been ahead of the curve. An Intelligent Around View provides an all-‘round  bird’s eye view (it takes up just about all of the display screen), Moving Object Detection (it helps you to avoid those rocks/near-boulders that you come across on those rustic cottage roads). You can utilize those off-road functions we mentioned earlier (hill descent control, etc.) when the vehicle is moving at less than 10 kms. 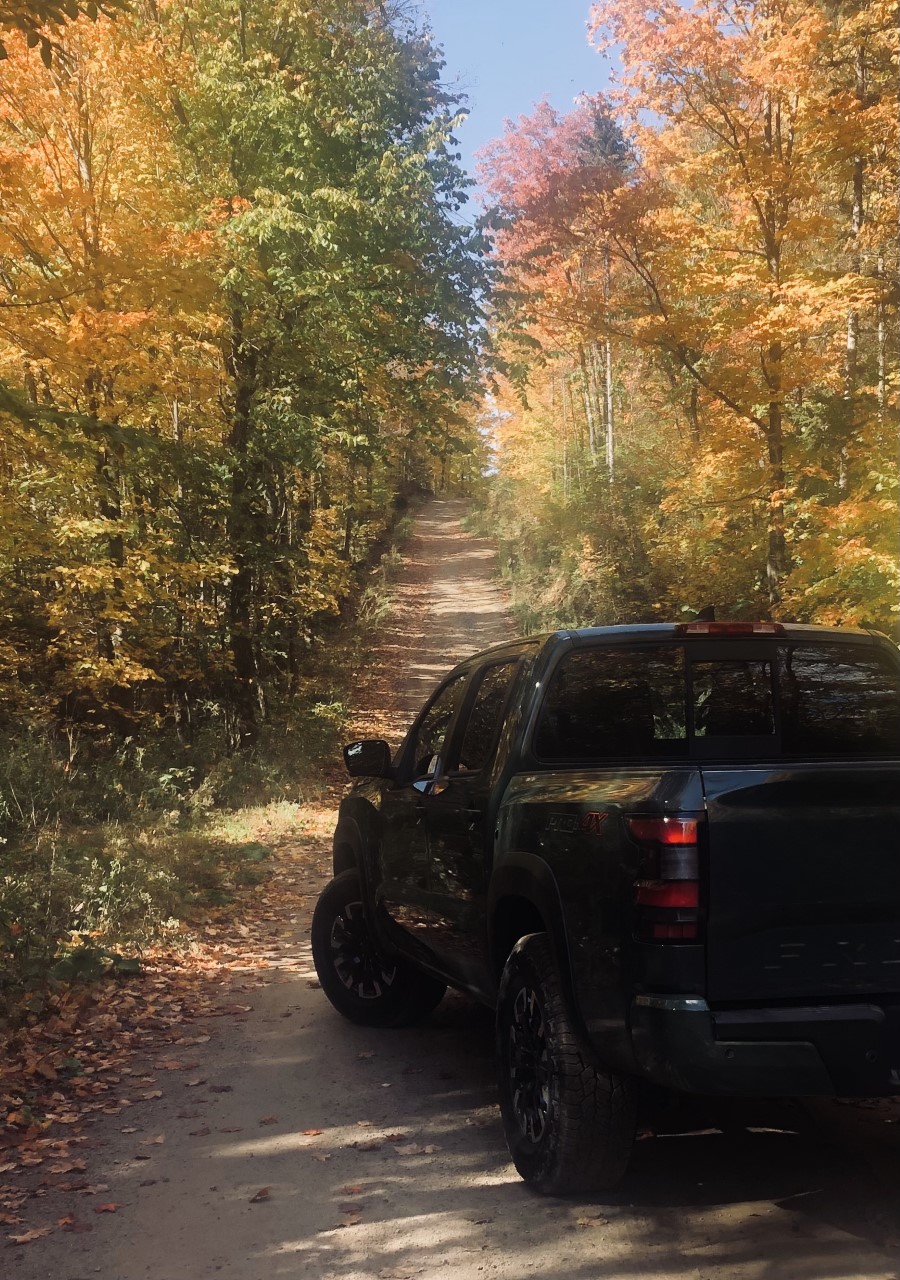 To say this particular assignment was a delight would not be an exaggeration. Driving through the Ottawa Valley at this time of year is awe-inspiring. Autumn is just about everybody’s favourite time of the year, with the trees a riot of colour, but as another one slips past, you realize (as you get older) the closer you’re getting to your own winter.

We were lucky the day we got to drive: it was gorgeous. Not a cloud in the sky nor hardly a breeze. At one point, we had to take a ferry from one side of the Ottawa to the other and there was barely a ripple on the water. As we drove, you could hardly hear a peep. This is because of 41 new parts being applied to reduce engine (five decibels), wind (2.5 decibels) and road noise (three decibels). New floor damping and new acoustic laminated front door glass are primarily responsible for this silence. 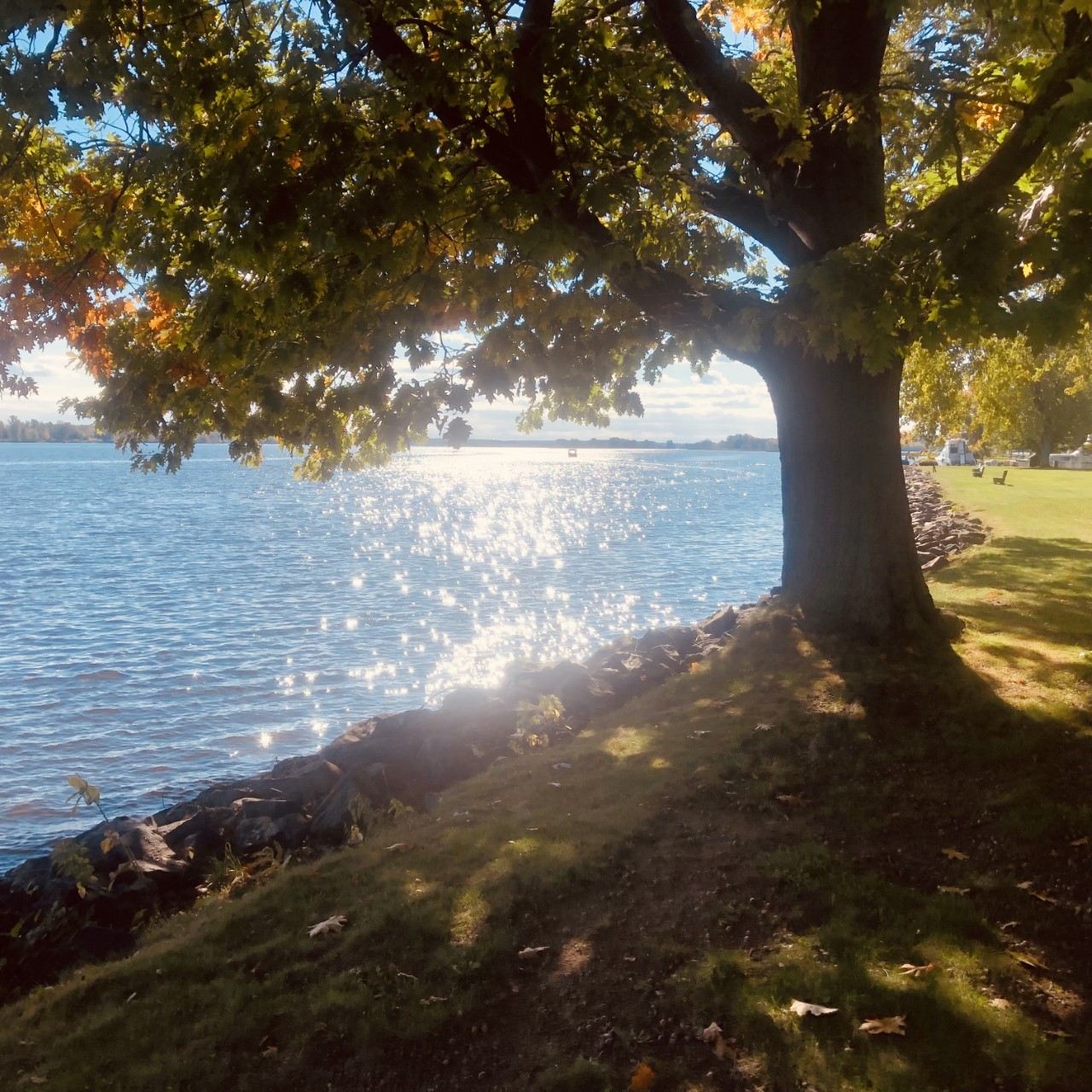 It’s not really a noisy truck anyway. Although you can feel the power the moment you put your foot on the accelerator, the motor is quiet. Even when you tramp on it, you can hear the REVs but not much.

I have one nit about this truck, which is on sale now. Ever though it’s classified as being in the mid-size segment, it’s as high off the ground as any full-size (those pesky off-road boulders, you know), which means it’s quite a step up to get into either of the front seats. So, both sides should have running boards. Other than that, though, Nissan’s got itself a winner here.