Join the Conversation (1)
The BMW M5 is already one of the best sports sedans on the planet, so how does the company go about improving it?

The Competition trim came first, adding an extra 17 hp and a slew of suspension and tuning upgrades. It was the same M5 but slightly stiffer and slightly more powerful and the difference on everyday roads would have only been noticed by a select few.

When the M5 CS was announced as the latest and greatest iteration of the ultimate sports sedan for $40,000 more than the Competition, I shrugged my shoulders. Charging more money is easy, but how much better could BMW actually make it?

BMW says that this special M5 is limited to one model year only, and with 10 extra horsepower over the M5 Competition for a total of 627 hp from its 4.4-L twin-turbo V8, it’s not just the most powerful M5 ever made, but the most powerful BMW ever made

Once again, 10 hp isn’t that much, especially when an M5 already has upwards of 600 ponies, but BMW also claims that they have reduced the weight by 100 kg. 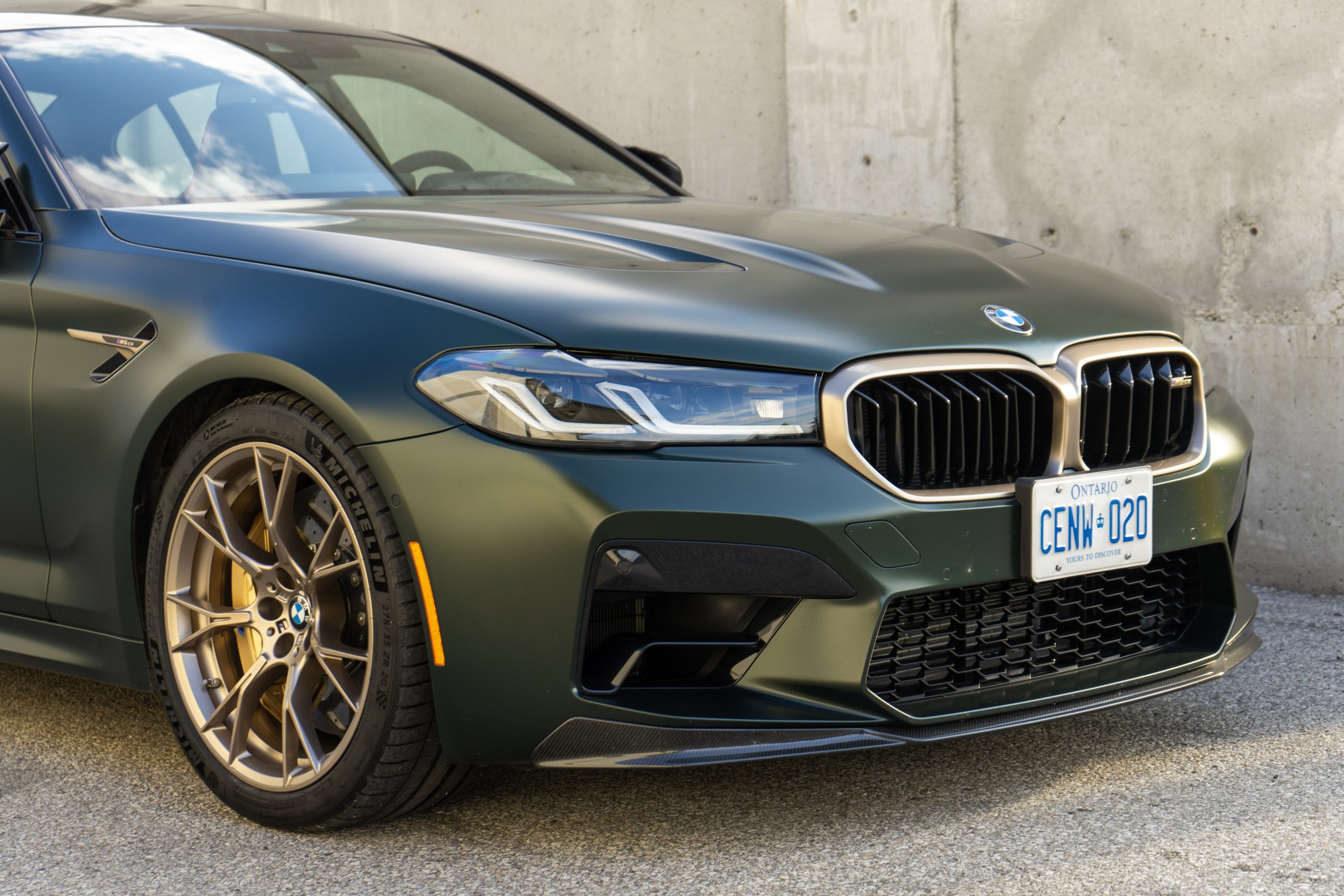 To do that the M5 CS went on a diet rich in carbon fibre reinforced plastic (CFRP) with the hood (standard on all M5s), roof, front splitter, mirror caps, rear diffuser, and rear spoiler all formed from the lightweight composite material.

The rest of the weight savings were realized through a reduction in sound insulation and through the use of standard carbon-ceramic brakes. That latter item saved a total of 23 kg where it really counts.

Then there are the options or lack of options. You won’t find a premium package or a technology package on the order form; instead what you see is basically what you get. 5 Series drivers used to luxuries like soft-close doors, massaging and ventilated seats, premium sound systems, adaptive cruise control, and 360-degree cameras will be disappointed to learn that these aren’t available on the CS.

In a car that’s been known to seamlessly blend the bells and whistles of a luxury cruiser with the performance of a DTM racer, did BMW go too far and give us a stripped-out penalty box of a car? 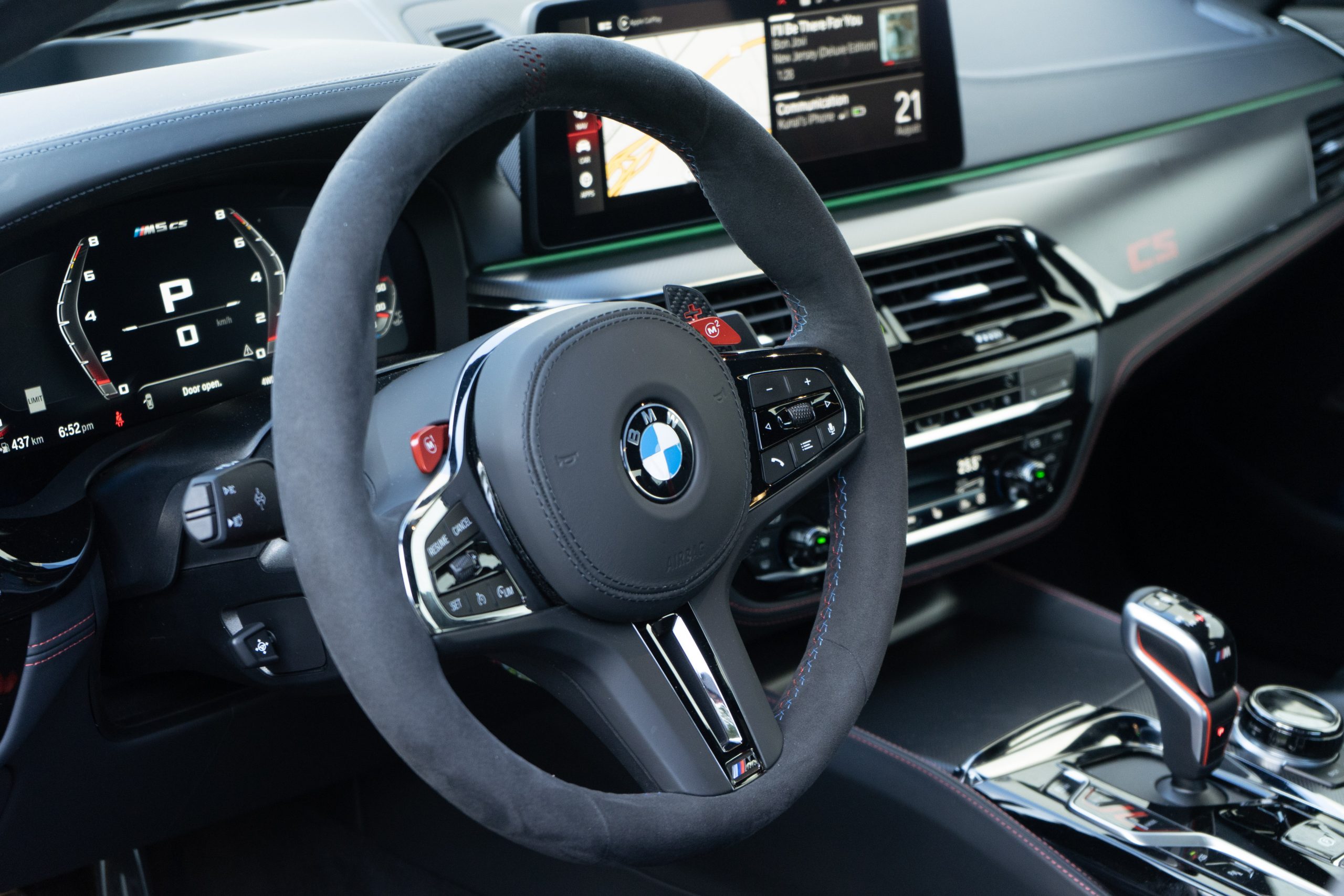 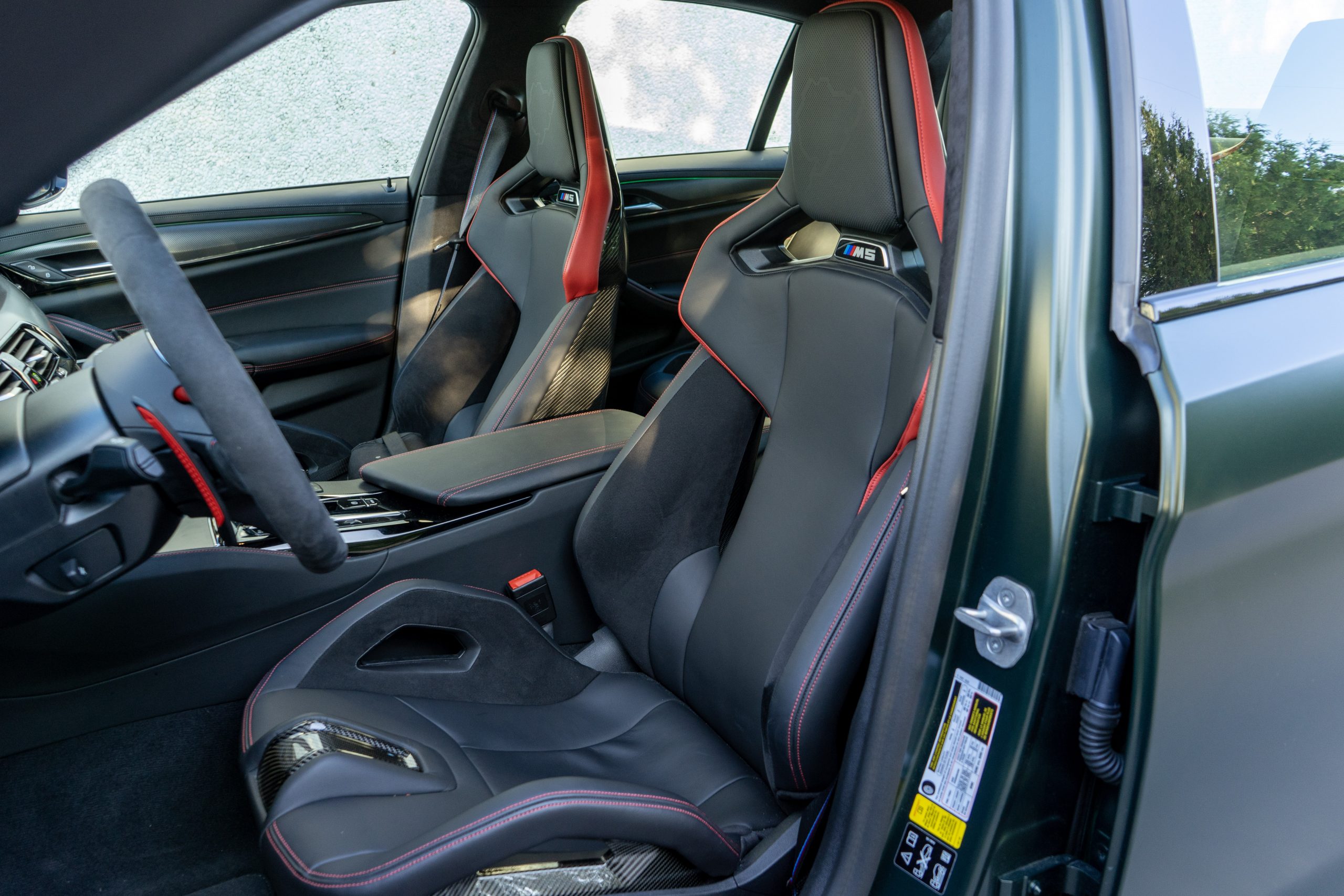 Not in the least. At no point during my few days with the M5 CS did I want for more comfort or luxurious fripperies.

BMW’s M carbon bucket seats, the same ones you find in the new M3 and M4 might look restrictive but are quite comfortable and very supportive once seated in place.

The first thing I noticed inside is that this is the first CS that retains its armrest, although the tray underneath has been deleted in the name of weight savings. The rear passengers don’t get an armrest either, or cupholders, but they do get individual bucket seats that are nearly as supportive as the ones in the front.

That fact makes the CS strictly a 4-seater, and in case your lucky friends in the back forget the main mission of this specific M5, a map of the Nurburgring racetrack in Germany embossed into each of the 4 headrests will serve as a reminder. 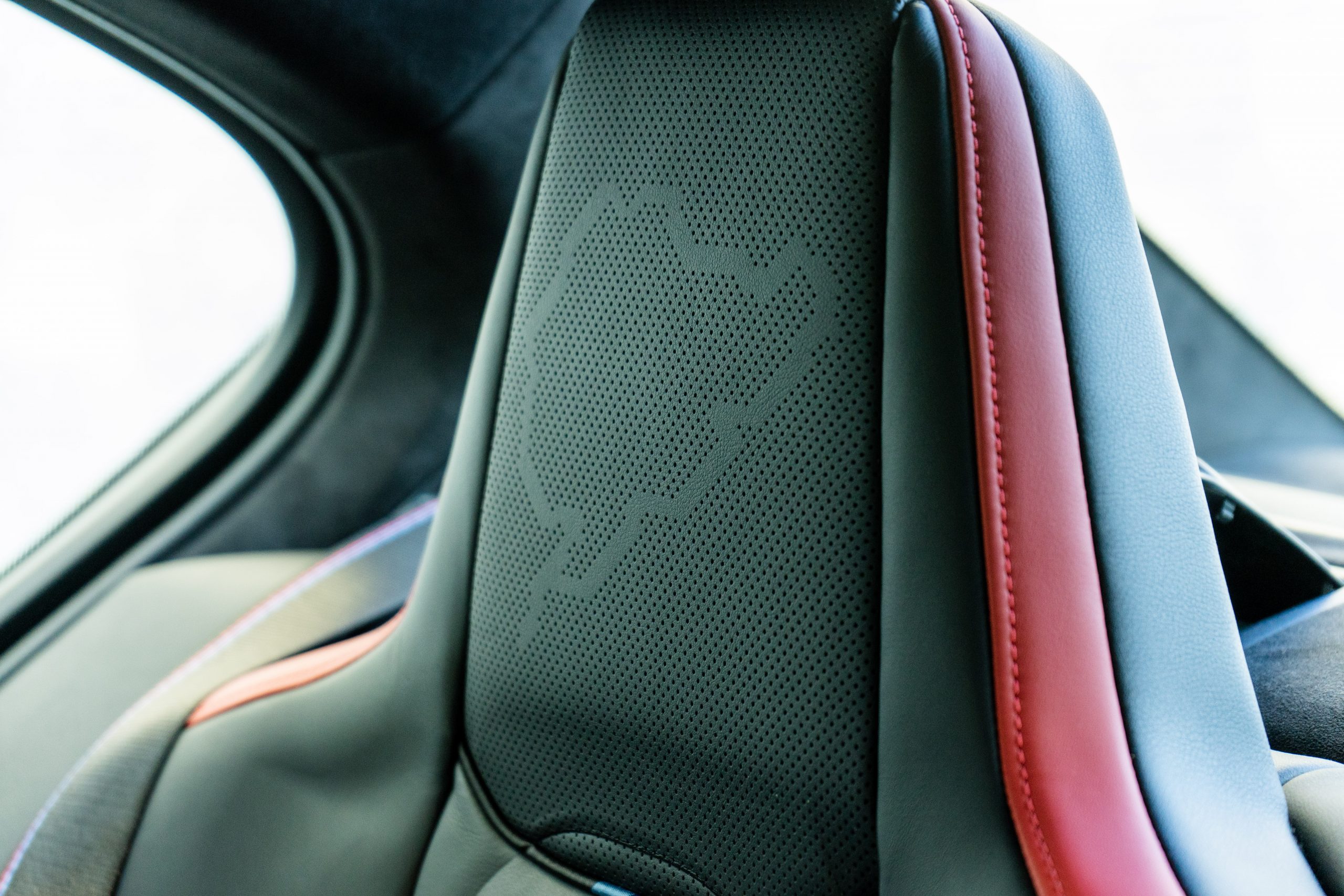 Then there’s the way this thing looks. Never has an M5 received so much attention from people. The Gold bronze accents on the grilles, badging, and rims contrasted with the "Frozen Deep Green Metallic" paint might be one of the greatest colour combinations out there currently.

In this guise, the M5 CS has enormous presence. Easily the most desirable of the big fast saloons I’ve driven.

But the driver’s seat is the best place to be in this car, and unlike the Competition, this M5 feels different straight away. I might not have the Stig’s level of car control but there’s more to this car than the sum of its parts. It feels like no M5 I’ve driven before. Light, tossable, and very responsive.

All the tech is the same, from the infotainment to the drive modes, including the new Setup button that brings you to the drive customization screen instantly.

It’s also possible to lock the CS into rear-drive mode and melt the rear tires like an unbridled hooligan provided you could find the space or a track to do so. 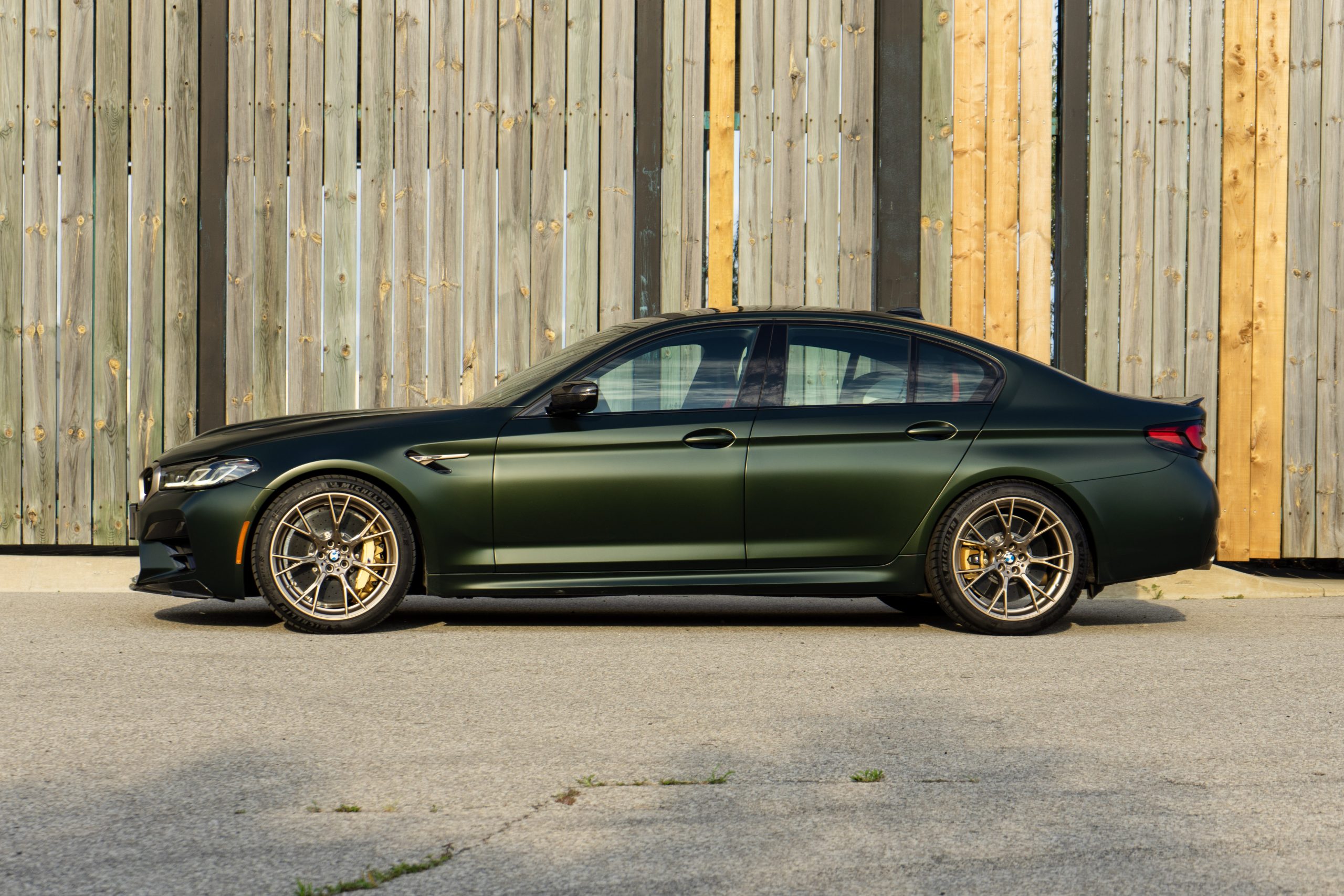 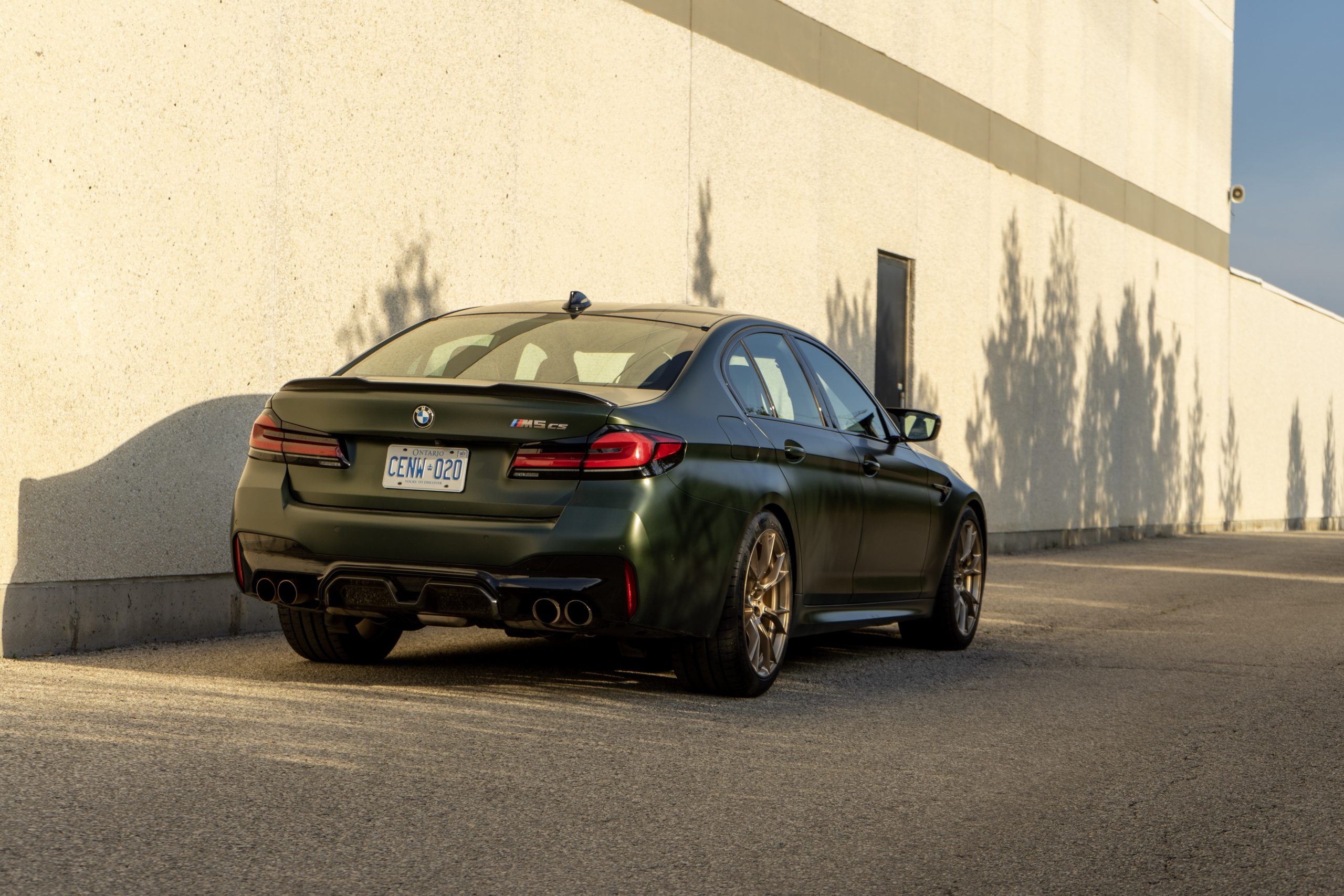 With enhanced dampers, stiffer springs, and a 6mm lower ride height, you’d expect the M5 CS to ride like a bucking bronco but in reality, it doesn’t feel much stiffer. You still get the excellent ride the 5 Series is known for with just a smidgen more starch in the suspenders.

In the sportiest, “Sport Plus” chassis settings the dampers go rock hard, but there’s a level of compliance you don’t find in lesser M-cars. It inspires confidence but makes the car so much more approachable and so much more enticing to drive.

Then there’s the power. It’s not just fast, it’s mental. According to the brochure, it will reach 100 km/h in 3 seconds, a number that seems awful conservative. Thanks to the AWD system, that power gets put to the ground in a hurry with little drama. If you floor it at any time, it will hook up and go.

Even with the immense power, you get the sense the CS is so much more. Its happy place is a twisty ribbon of road somewhere far away, a place where it can exercise its suspension and warm up its powerful carbon brakes.

Never have I had the urge to want to take an M5 to a track and give it a good flogging but the CS almost begs for it. Funny what shedding a few pounds and gaining a bit of muscle can do.

If BMW wanted the M5 CS to be the M5’s swan song, then they’ve succeeded. It costs much more than an M5 Competition but for the first time, I feel it’s worth the extra CS money they’re asking.

All the CS badged specials are great but the M5 CS is exceptional. Period.