Join the Conversation (0)
The BMW M3 has never been offered with all-wheel drive. If you wanted a fast sports sedan with four driven wheels you bought an Audi. But if an undiluted rear-wheel drive tire-shredding hooligan suited you better, the M3 was always the best choice. And it still is, whether you pick the sedan or its coupe sibling, the M4.

In Competition spec both get over 500 horsepower with a mandatory automatic transmission that shifts so quickly and so smoothly you’ll never mention the word dual-clutch again. The power still goes to the rear wheels by default but for the first time, all-wheel drive is an option.

BMW purists and aficionados (read fan boys) thought this day would never come but I can tell you that any fears of the car they love being ruined can be put to rest. All-wheel drive transforms the BMW M4 into even more of a beast than it already is. It turns a fast car, into a blisteringly fast car and not just when the weather is perfect. 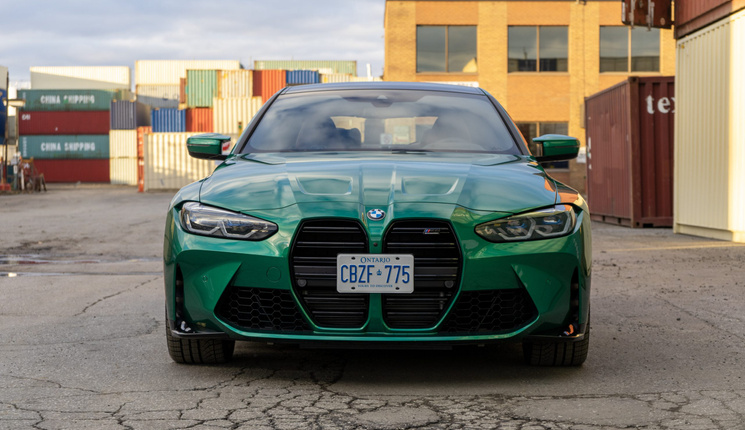 Finished in Isle of Man green with a Tartufo (brown) leather interior, this 2022 BMW M4 Competition coupe is a stunner. Say what you want about the grille, but as a package, the M4 is vehicular drama at its finest. It’s an extrovert in a world of safe design and that grille is proudly on display for all to see. With inflated fenders, wide hips, and a muscular stance, it looks ready to put in an honest day’s work at your local track, but this M4 is just as happy plodding along the 401 in rush hour traffic, even though you might not be.

M xDrive tacks on $3500 to the standard M4 Competition’s price tag and is a similar system to what’s found in the M5. Which means it offers all things to all people. Drive torque gets sent rearwards by default but an electronically controlled multi-plate clutch in the transfer case seamlessly and variably sends torque to the front wheels when slip is detected. 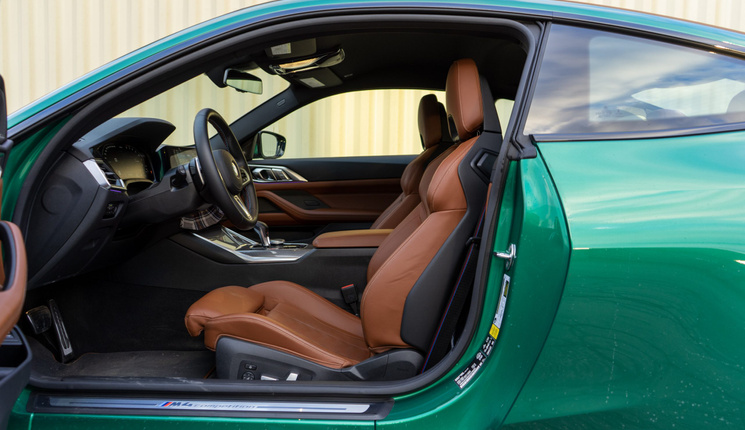 There are a couple of modes accessible through the drive setup screen. 4WD Sport sends even more torque to the rear wheels and if you deactivate the stability control completely, you can lock it in rear-drive or 2WD mode. Once in 2WD mode, the front wheels will not step in to assist no matter what happens so you’d better know what you’re doing. There’s also a built-in M drift analyzer that will score you based on how big of a slide you just pulled.

Four driven wheels also makes this M4 nearly half a second faster when you launch it to 100 km/h. Half a second might not sound like a lot but it is significantly quicker. BMW’s typically conservative factory quoted time of 3.5 seconds to reach the century mark puts this M4 in clear supercar territory. If it weren’t for the accommodating back seats that can actually fit adults or the large trunk that will swallow the biggest of suitcases, or the surprisingly good fuel economy, you’d be forgiven for assuming this was a supercar. But this M4 started out life as nothing more than a 4 Series, a very nice car in its own right but far from what you see here. 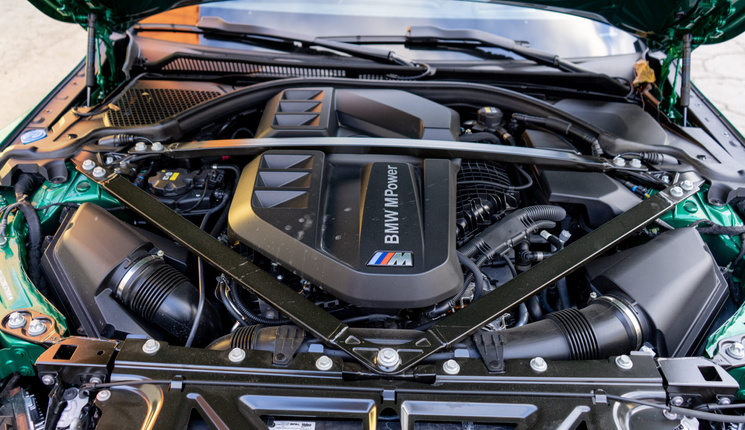 The 3.0-L twin-turbocharged straight-six makes 503 hp and 479 lb-ft of torque and imbues the gas pedal with so much potential energy, that it feels like a dying star ready to go supernova with the prod of a big toe. While the 7-speed dual-clutch from the old M4 is gone, the 8-speed automatic is so good, you won’t care.

The M4 Competition now makes more power than its main rivals the Audi RS5, (444 hp) and the Mercedes-AMG C63 S (469 hp), and even though the AMG is near the end of its life cycle, its replacement is rumoured to be dropping that glorious V8 in favour of a 4-cylinder hybrid setup, not exactly music to these ears. The M4 was always more of a precision tool, a scalpel among meat cleavers, but was outmuscled by the AMG, and out gripped by the Audi, and that’s no longer the case.

In “efficient” mode, which is the M4’s “comfort” mode, and with everything set to its softest setting, you get a docile and comfortable coupe able to tackle short jaunts to local restaurants, or school pickups with the utmost of ease. There’s even a button that will quiet the exhaust so you don’t become that annoying person with the BMW in the neighbourhood that no one likes. 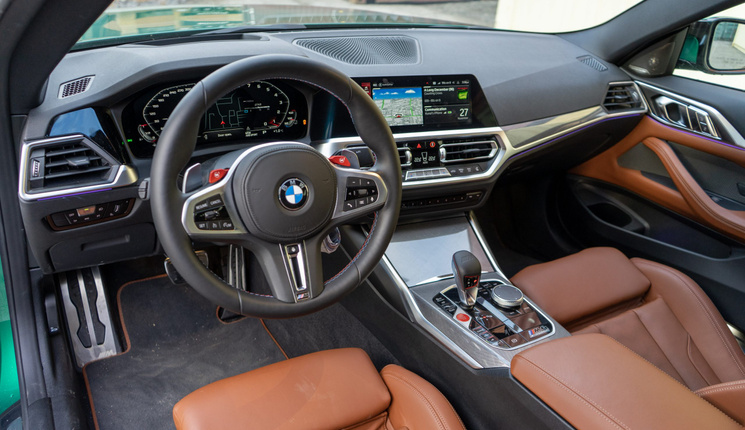 Set all the parameters, of which there are many, to full attack mode and you have a completely different car on your hands. The exhaust barks and gurgles, the shocks feel like they get at least 50 per cent stiffer, the steering firms up, and the throttle turns into an instant-on switch. This once dignified green coupe goes from benign cruiser into track destroyer in a split second.

You really do need access to a track to get a sense of how much potential is on hand here, but the steering, retuned to be quicker with all-wheel drive, is laser-precise, and allows for an extra confident turn-in. It corners flat, there’s little understeer to report, and in 4WD sport the tail will still step out on command. The way it can rocket out of a corner needs to be experienced, and there’s nothing this side of a Porsche 911 that can do it better. 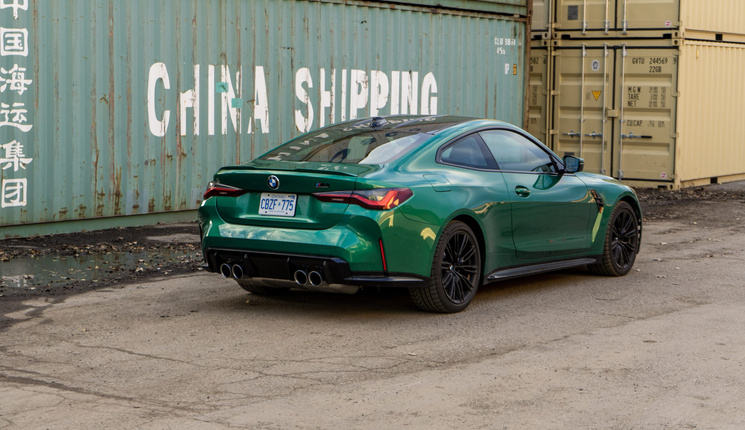 If there’s one criticism to hurl at the M4, it’s that like the M5, another supernatural performer, there’s almost too much speed. And that makes it difficult to enjoy on public roads. The highway is no help either because even at 120 km/h, the average speed of most motorists, the M4 Competition feels like it’s asleep. Unlike a Mazda Miata, which is fun and engaging at low speeds, an M4 Competition is too quiet, too luxurious, and too disconnected. It feels like a 4 Series with an extra layer of carbon fibre and suede.

That’s not to say this isn’t a special car, because it absolutely is. Objectively, an M4 Competition with xDrive is probably the best sports coupe you can buy in its price range. It’s so well balanced and so capable that its competitors will be playing catch up for a while. It makes true supercar performance more accessible, even if you need a track to realize it.