Join the Conversation (0)
Things move super quickly in the EV world. So quickly, in fact, that in a year where Volvo has introduced the Recharge name for 2021 as a new moniker for all of its electric vehicles – the vast majority of them plug-in hybrids like this refreshed 2021 XC 60 Recharge – the company also declared that it plans to shift the entire company to sell only pure electric vehicles by 2030. Not starting in 2030, but by 2030.

“By then, the company intends to only sell fully electric cars and phase out any car in its global portfolio with an internal combustion engine (ICE), including hybrids,” declared Volvo’s global statement, released in March to considerably less fanfare than their declaration in 2017 that all their models would be electrified (hybrid or plug-in) by 2019.

Luxury rival Cadillac raised some eyebrows recently when it confirmed it plans a similar phaseout of any ICE vehicle in its lineup for 2030, while Jaguar plans to go all-electric even sooner, by 2025, the firm stated earlier this year. They and the traditional German luxury brands have all released plans to unveil heavy BEV lineups to help it compete with current luxury EV market leader Tesla, which of course doesn’t offer anything but BEVs.

That doesn’t mean that Volvo’s new Recharge name helps clear up how ‘electrified’ the model is, because the new for ’21 Recharge name is used on both Volvo’s plug-in hybrid (PHEV) and battery-electric (BEV) models (XC 40 Recharge now, C40 to come). The Recharge badge really only highlights that the vehicle can be plugged into a socket, or a charging station, what EV purists often call an EVSE, for electric vehicle supply equipment. 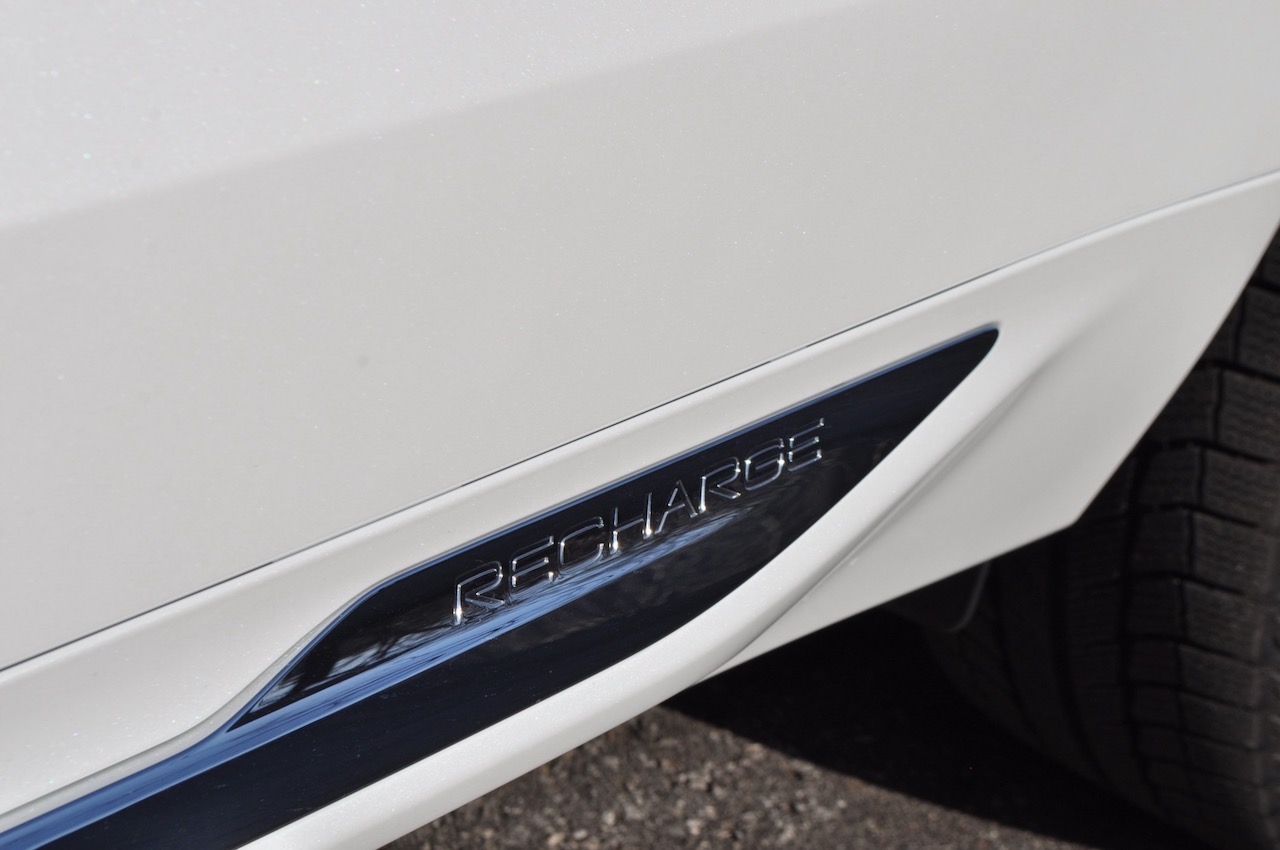 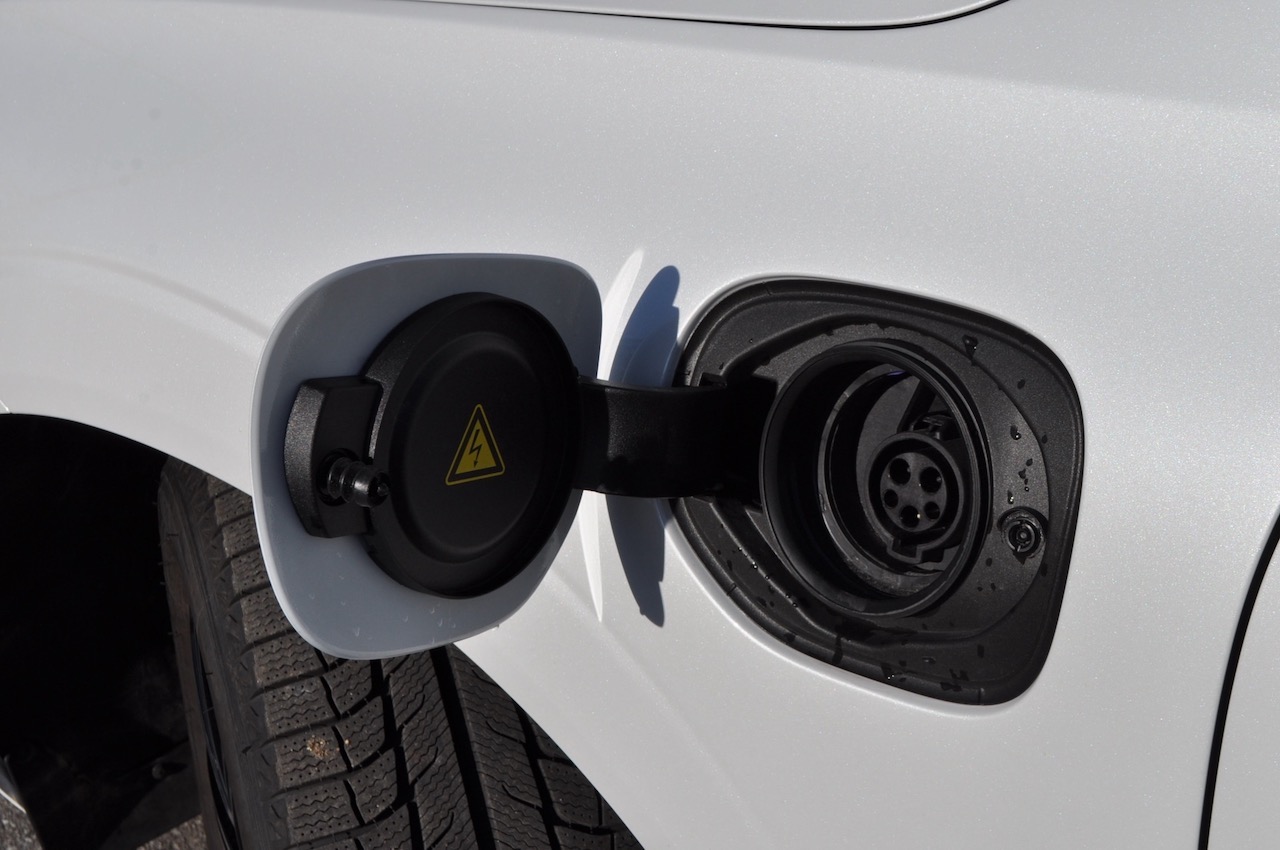 It also gives Volvos some of the longest names in the business: the one I drove for a week here is officially called the 2021 Volvo XC60 T8 Recharge Plug-in Hybrid Inscription Expression, or XC60 Recharge for short on Volvo’s consumer site.

The difference over the XC60 T8 Polestar I tested last summer was notable in some ways, but very similar in others. Besides the new Recharge badging, where the Polestar version was a hard-edged performance machine that had rear-seat passengers noting their Skittles jumping around in their packs, this one was a smooth and comfortable family hauler, with refinement especially high in all-electric mode, which is officially rated to last for up to 31 km on a full charge.

This limited all-electric range may have been a worthy distinction for the XC60 T8 when it was first released, and still outduels the rare plug-in BMW X3 xDrive30e, making it useful especially for folks with a shorter commute – of the predicted 33 km or so of range I usually saw, I’d usually hit between 22 and 28 km of AER (all-electric range) in high single digit temps, though it did bring in engine operation occasionally to help heat the interior, even if driven with a light right foot.

The ’21 XC60 Recharge has the same 11.6 kWh lithium-ion battery as last year’s tester, though this version’s 2.0-litre turbocharged and supercharged 4-cylinder engine makes a slightly lower 400 hp and a worthy 472 lb-ft of torque in the Recharge, or only 15 hp less than the much pricier XC60 Polestar Engineered version, which starts at a whopping $89,150 for 2021. That said, this Recharge’s 31 km falls short of newer luxury PHEVs such as the Lincoln Corsair Grand Touring (45 km) or even mainstream plug-in SUVs like the Toyota RAV4 Prime (68 km), both of which start at less than the XC60 Recharge’s base $66,650 MSRP. 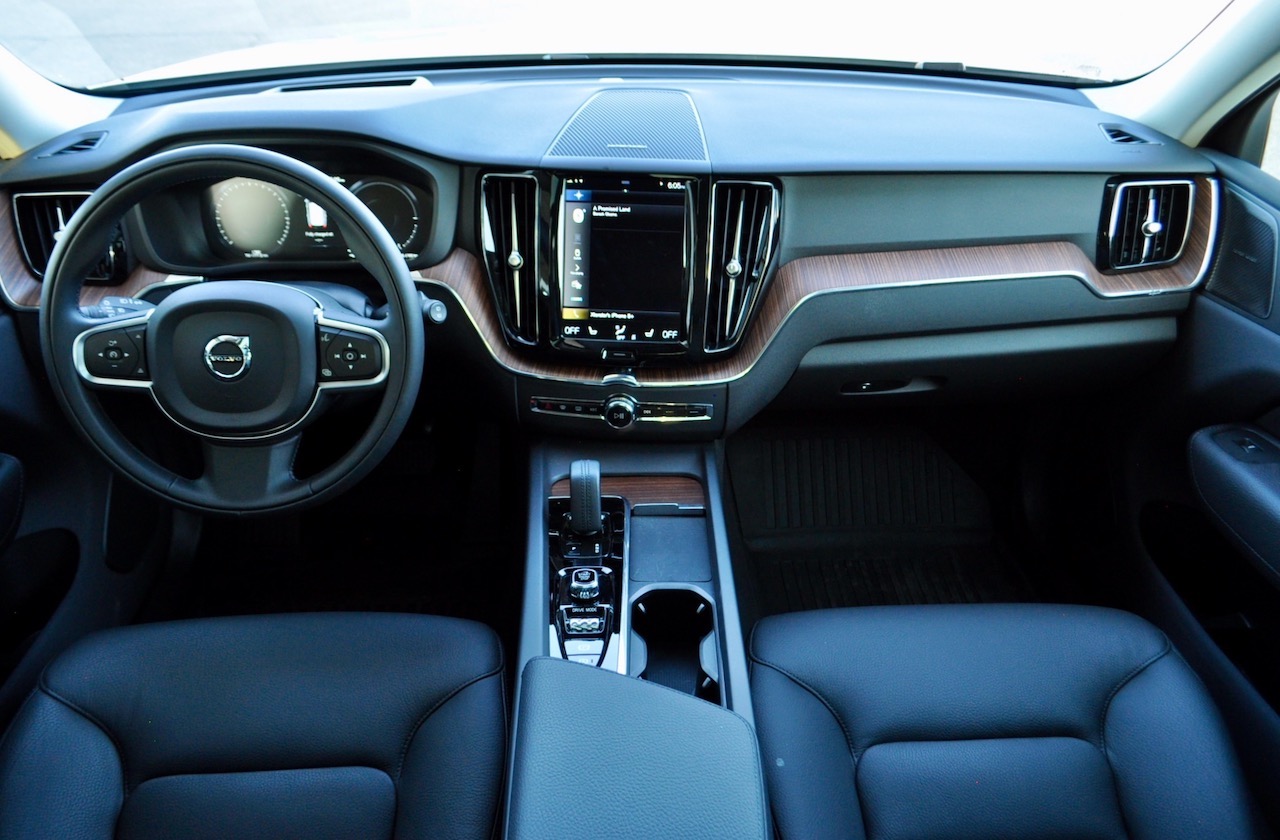 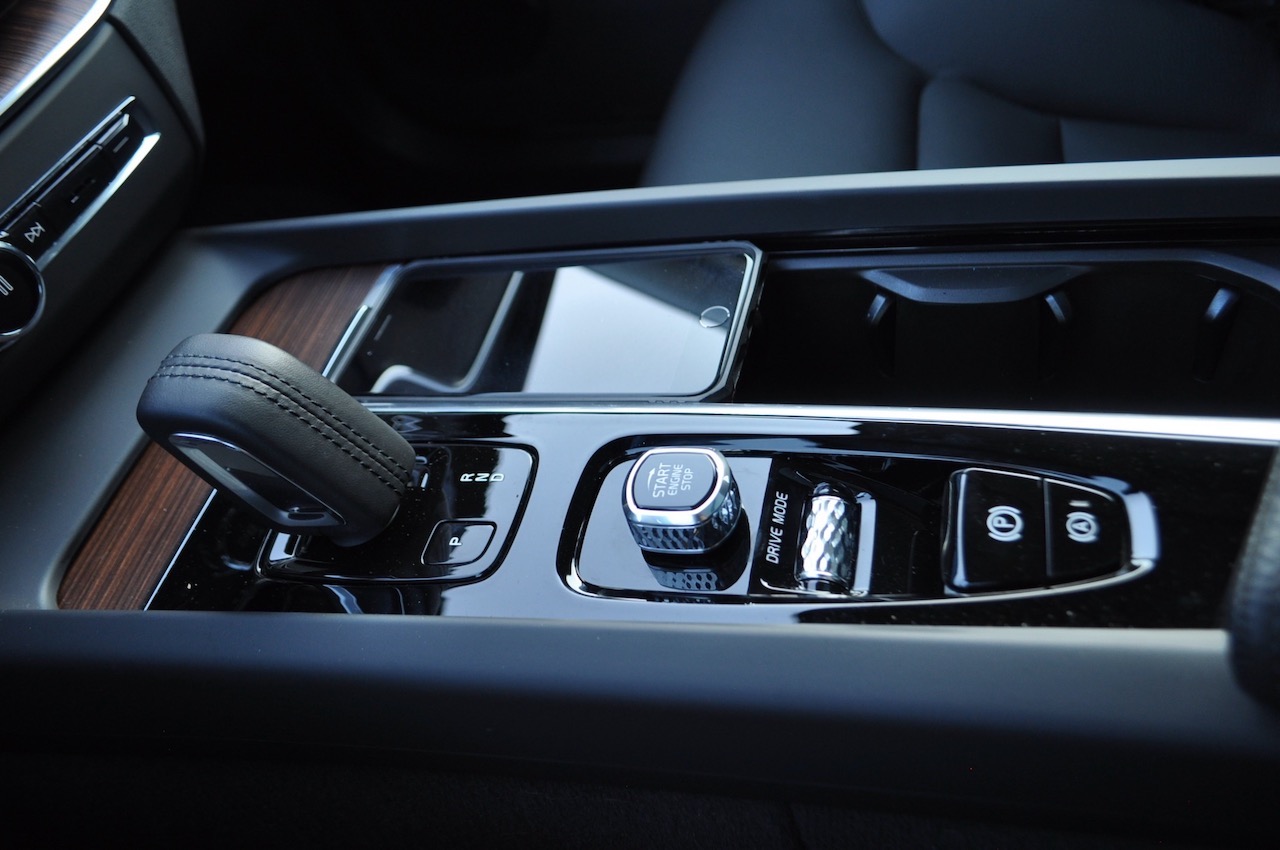 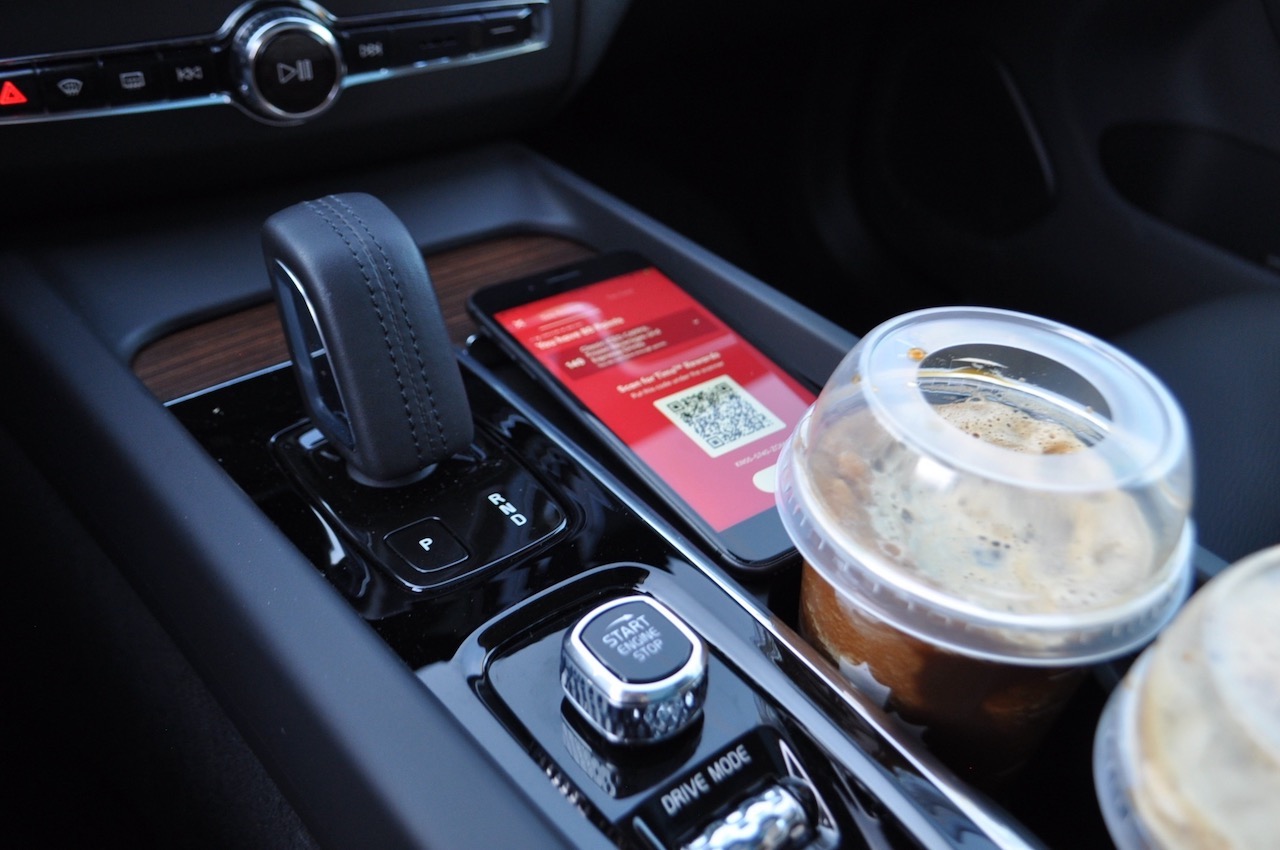 For that price, which is too high to qualify currently for any federal or provincial EV rebate, the XC60 Recharge provides a host of niceties, including a panoramic sunroof that opens, handsfree power tailgate, heated memory seats, and swiveling LED headlights, still with Volvo’s well-known Thor’s Hammer design motif. Our tester came with the Climate Package ($1,000) that added heat to the rear seats and steering wheel, a Premium package ($1,500) that added Homelink, Road Sign info to the GPS, and the handy electronically foldable rear headrests. The priciest one here was the Advanced package ($2,450), which added a head up display that could easily be seen with polarized sunglasses, a 360-degree camera, a new wireless phone charger, and Volvo’s most advanced Pilot Assist adaptive cruise control system.

One sour note on the latter’s wireless phone charger: though it’s nice to finally have this ability, its placement just in front of the cupholders means that larger phones will intrude on the top cupholder. And if both cupholders are occupied, placing your larger phone (iPhone 8+ shown) down will push it off the charger’s sweet spot.

Our tester also had a novel air cleaning system that seems particularly apropos of these times. Volvo calls the system its Advanced Air Cleaner ($350), which is a unique system that measures and indicates the amount of particulate matter less than 2.5 microns (PM2.5) outside the car, then uses ionization and a special synthetic fibre-based material to keep up to 95 percent of those health-harming particulates out of the cabin, says the company. Canadian drivers can also use an app to schedule an extra cleaning of the cabin air ahead of time, which then tells drivers the actual PM2.5 levels inside the cabin after cleaning.

Once more on the negative side of the ledger: there’s no AM radio band, as on a couple other plug-in vehicles, but not all. Thankfully there are now digital versions of these AM stations widely available, but with a pregnant pause when station hopping and them often looking like multiple versions of the same station in your station list, it makes you wonder whether a little more digital elbow grease could have saved traditional access to AM sports and talk radio, as available on other EVs. 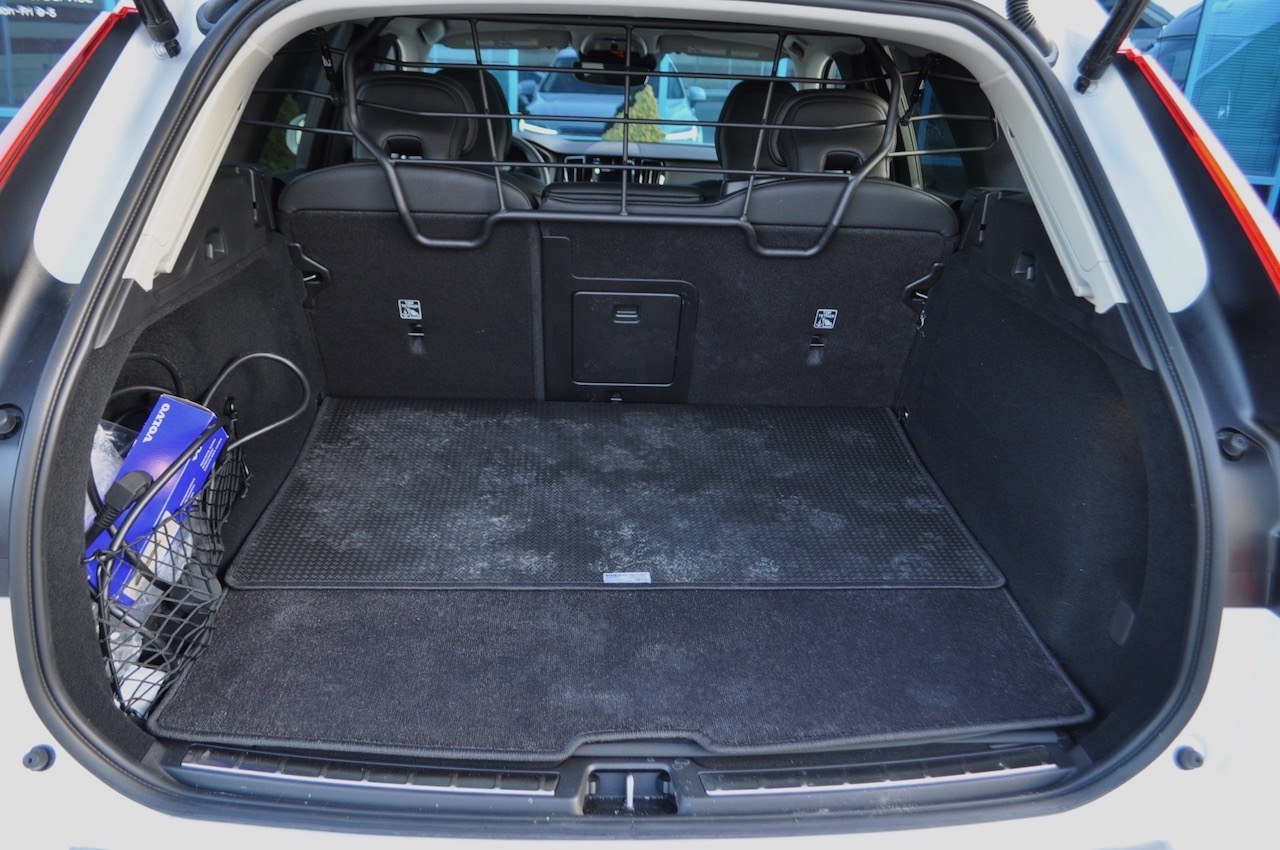 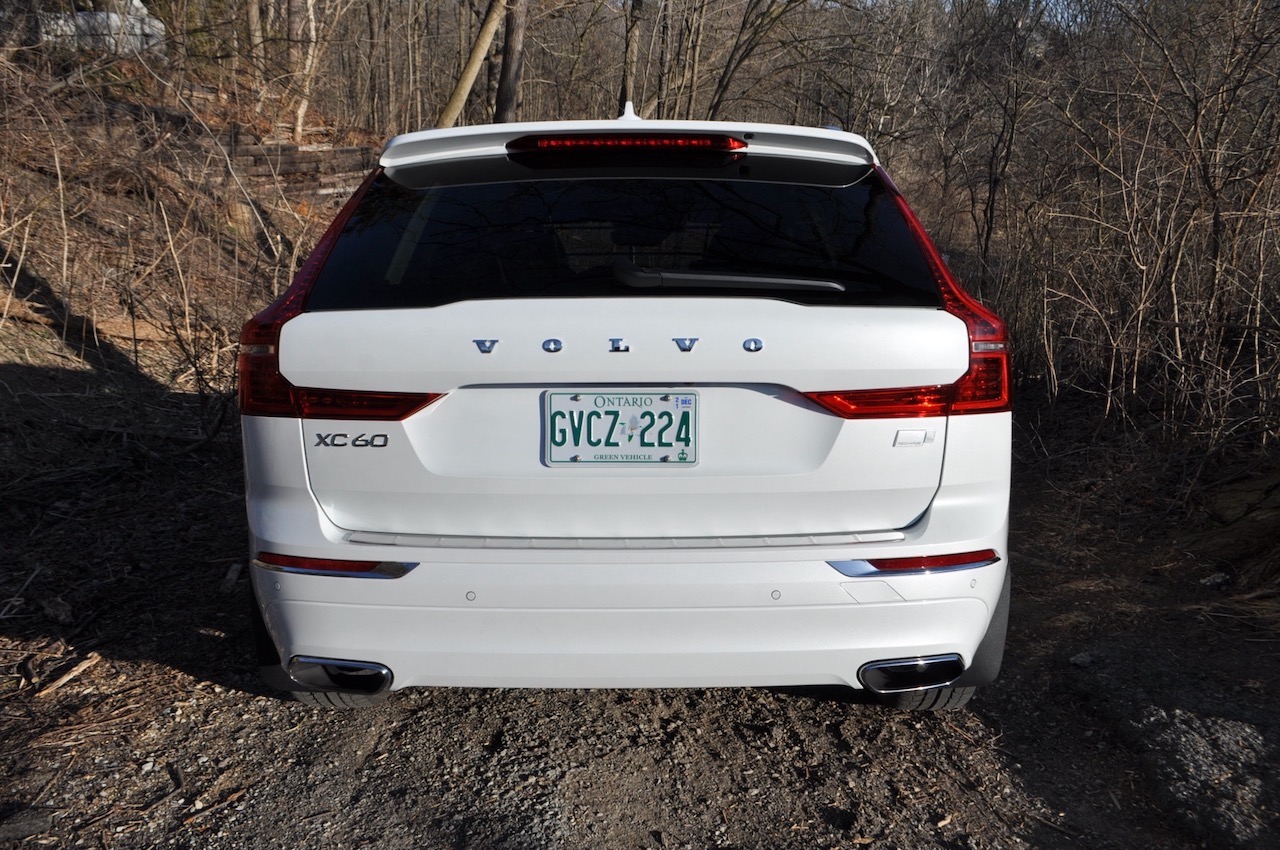 From the driver’s seat, the XC60 Recharge was a smooth operator at all times, but especially silent when dialing in the pure electric Drive Mode on the chrome wheel, just underneath the similarly unique rotary Start button that’s now in all Volvos, along with the vertical Sensus infotainment screen. Sadly, the electronic shifter still needs two pushes down or up to get into Drive or Reverse, respectively, resulting in multiple selections of N inadvertently. That shifter is available in Swedish Orrefors crystal, but came in the regular D-shaped shifter here.

A stomp of the throttle combined with a couple quick downshifts using the eight-speed automatic provides for healthy good response (and fun) at any speed, but there are no shift paddles as on Polestar versions. Driving it like an enthusiast will burn up its limited EV miles even quicker, where its overall fuel consumption of premium fuel averages 9.3 L/100 km, and there’s no DC quick charge capability here (take a bow Mitsubishi, the Outlander PHEV still rules there). That mid-pack fuel efficiency figure suggests that if your normal commute exceeds 30 km, and you don’t have a charging station at work (or whenever work returns), then efficiency-minded drivers may also want to also consider luxury SUVs like the Lexus RX 450h (which averages 7.9 L/100 km) or the smaller Lincoln Corsair GT (7.1, and uses regular octane gas).

Our well-loaded XC60 Recharge tester came out to a final as tested price of $77,345, which didn’t include the price of an accessory cargo/pet divider in the rear with a hydraulic strut that kept it up against the roof when not in use. That 505-litre cargo area is once more midpack amongst its plug-in and hybrid rivals, but is nice and flat, and comes with a ski-pass-through that allows for seating for four with skis or hockey sticks poking through.

All told, the 2021 Volvo XC60 Recharge is a comfortably luxurious and roomy upscale plug-in hybrid, but even with a mild restyle inside and out, its carryover powertrain and familiar minimalist design motifs are lavishly modern, but slightly less futuristically modern than in years past. And if you tend to keep your vehicles for a long time, you may wish to include in your test drives at least one all-electric luxury crossover, of the even quieter and more efficient BEV sort that Volvo suggests will replace vehicles like this XC60 Recharge within the next half-decade to nine years.