The Tacoma is still a fun little truck. But get yours with the right options.

Join the Conversation (0)
The Toyota Tacoma was originally introduced in 1995 as a replacement for the Hilux (or simply the “Toyota Pickup” in the U.S. market) and is probably most famous for surviving the demolition of a skyscraper on Top Gear.

Truly the Tacoma has received few significant updates over its 16-year lifespan. In fact, the only notable things Toyota can think of to tell us for 2021 are: there are some new options groups called “Nightshade” and “Trail” — which represent the top and bottom of the options groups respectively, the TRD Pro trim has a new optional colour called “Lunar Rock” and dual zone climate control is now standard on all models.

But what’s most note-worthy about the Toyota Tacoma is not what’s new, but what’s old— what it’s managed to retain in the face of constant innovation. Specifically, the Tacoma is now one of only three “small” trucks to offer a manual transmission.

Along with the Nissan Frontier and Jeep Gladiator, the Tacoma is now one of the only options for off-road enthusiasts with an itch in their left foot. And that makes it all the more puzzling why Toyota’s current fleet tester doesn’t feature a manual transmission. 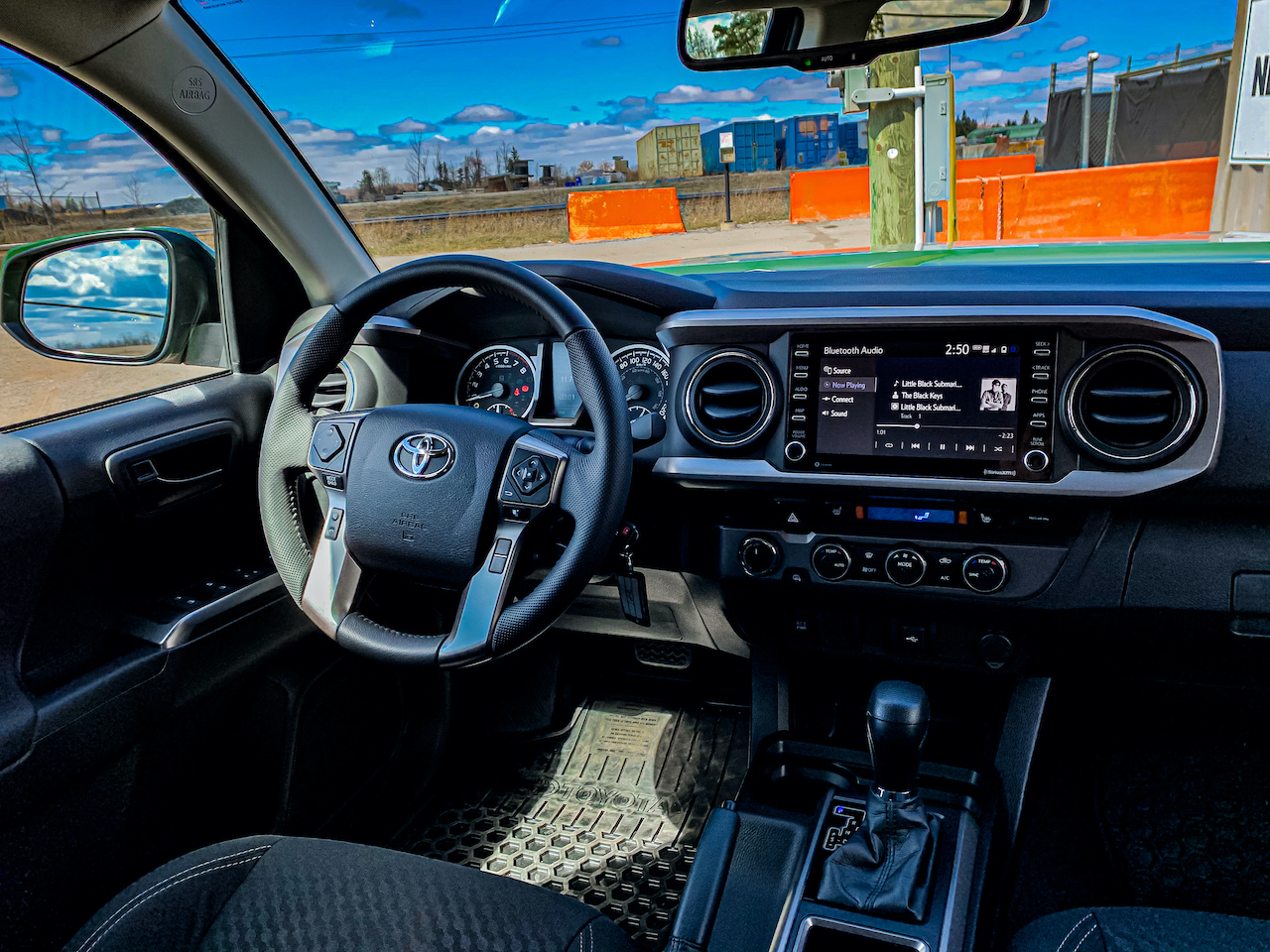 So straight away, if you’re shopping for a Tacoma, be aware that the stick shift is still an option. Besides the additional torque control, there are a few good reasons to go for the manual. Not least of which are sport tuned shock absorbers, which are unavailable on our as-tested automatic variant.

Regardless of the transmission, the fundamental utility of the double cab Tacoma remains the same.

The bed is 60.5-inches long, (although the access cab models feature 73.7-inches — enough for a standard 6-foot cut of lumber) making it more than usable for the layman or outdoorsmen. It can also carry a payload of over 1,100 lb in any variant and tow about 6,400 lb — enough to pull your average bowrider boat. 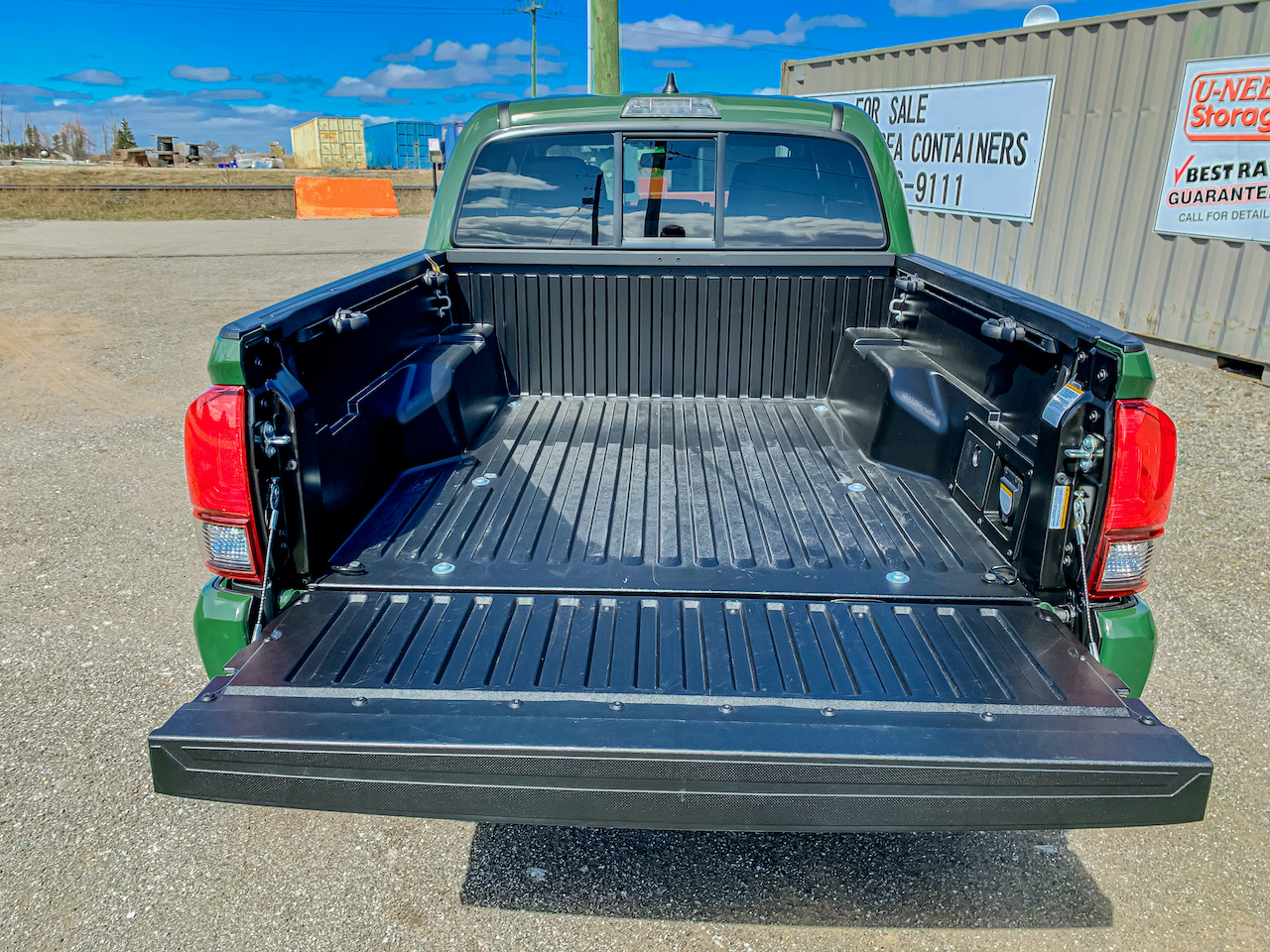 You also get 239 mm ground clearance. Coupled with the auto LSD, part-time selectable 4WD and a 2-Speed electronically controlled transfer case, you can handle most reasonably rough terrain with ease — sloshing through deep mud or rolling up smooth rock faces is a stress-free experience. For those with a greater need for off-road adventure, the optional TRD packs offer Bilstein shock absorbers and a proper locking rear differential.

The trade off, like in most pickups, is that the ride is rough. The Tacoma still utilizes rear leaf spring suspension, so going over train tracks not very comfortable. But really, the rugged ride just adds to the experience — to the fun.

Even though there are no fewer than five cup holders inside, the Tacoma’s interior remains pretty spartan. In fact, the only thing that you could describe as “adequately trimmed” would be the leather-wrapped, tilt and telescopic steering wheel. Our as-tested model came with the “Trail Grade Fabric Seats” that are heated. 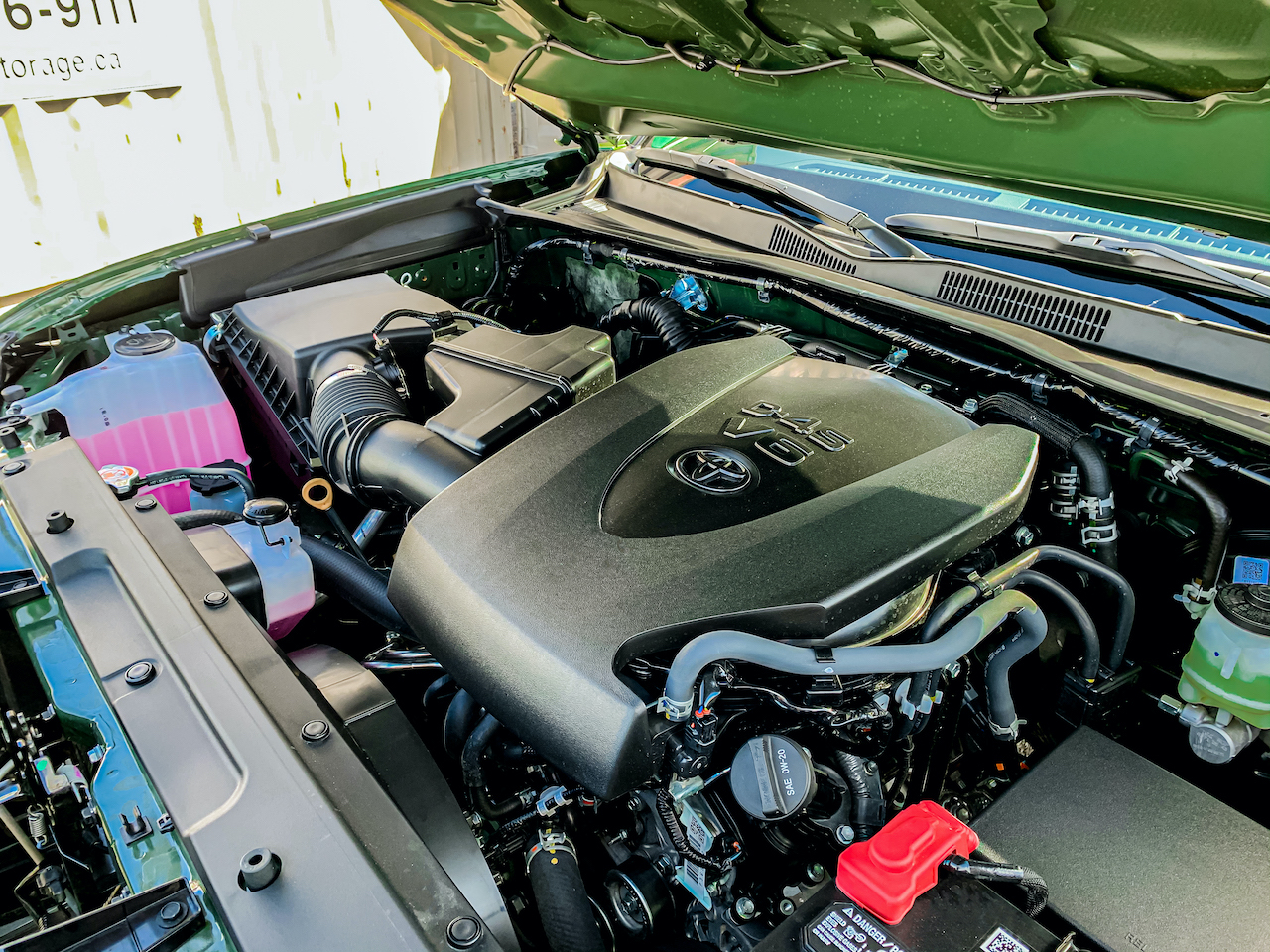 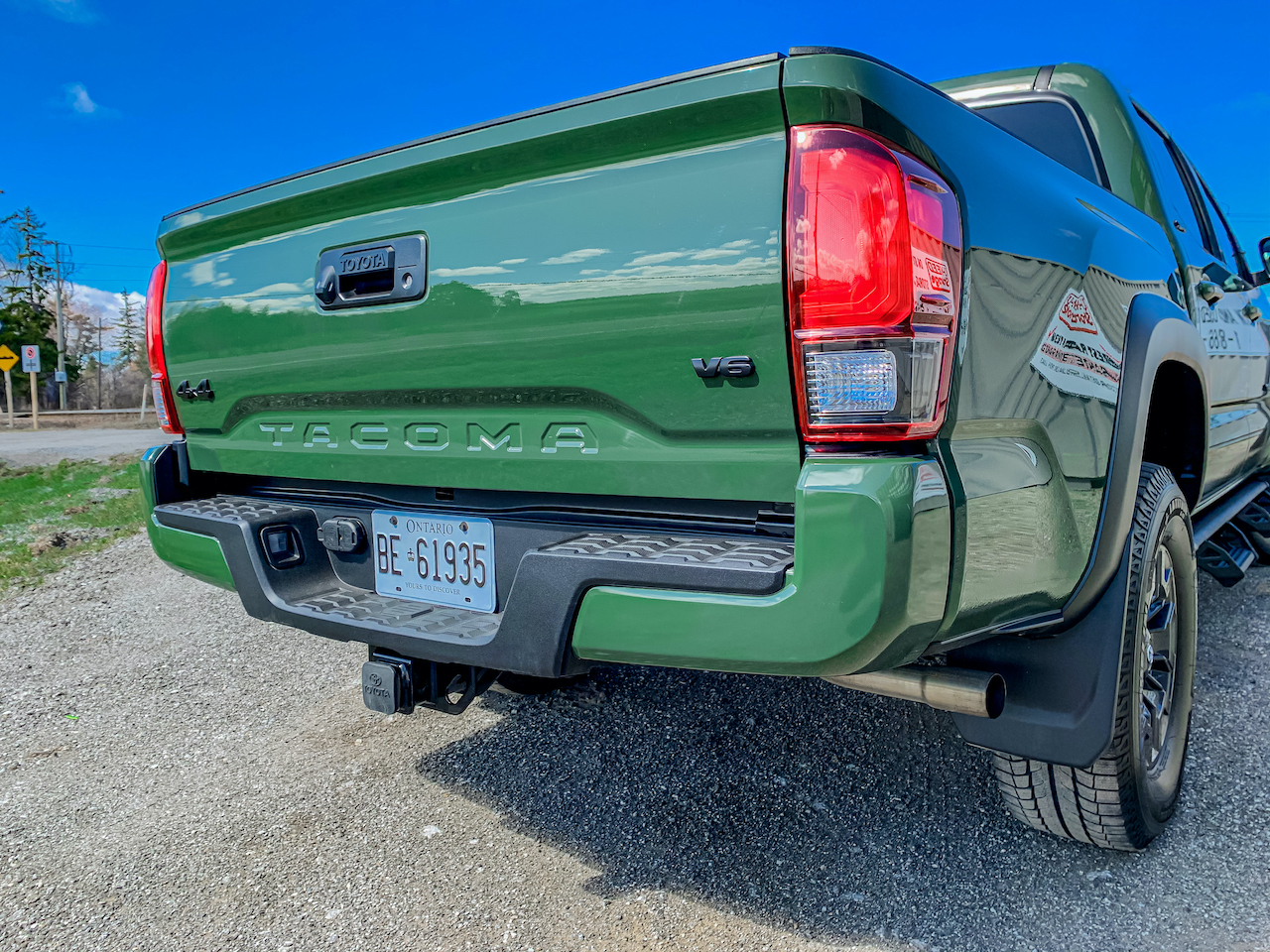 The Tacoma's 8-inch touch screen, six-speaker infotainment system is Apple CarPlay and Android Auto friendly— although if you want embedded navigation, as well as traffic and weather, again, get the manual variant of the Tacoma Double Cab SB, as those are all standard. You also get wireless smartphone charging in the manual variant.

Features such as auto high beams, a pre-collision system, a lane departure alert and dynamic radar cruise control are all welcome and make long trips a little less tedious. If you opt for the manual, you’ll receive a blind spot monitoring system too.

One thing to keep in mind is that the TRD Off Road pack for the Tacoma SB automatic come in at an incredibly inexpensive $300-plus. For that you’ll receive a host of interior upgrades, including TRD seats and a leather wrapped shifter, infotainment upgrades like embedded navigation and weather, performance upgrades including the Bilstein shock absorbers and locking rear differential, as well as convenience features such as a push-button start and key fob with remote start.