Prime plug-in is the most powerful, most efficient RAV4 ever.

Join the Conversation (1)
Toyota’s goal of having an electrified variant of every model they produce by 2025 is well underway. The brand new Toyota Venza and Sienna minivan only come in hybrid guise now, and it will only take an extra $2000 (in most cases) to transform your Camry or RAV4 into a hybrid. They’re making it difficult for you not to buy one.

But hybrid tech isn’t exactly cutting-edge anymore. Toyota has long perfected it since first offering it on the Prius over 20 years ago. Then in 2012, they introduced the Prius Prime, a plug-in hybrid that had a bigger battery, an electric-only drive mode, and could travel nearly 900 km on a tank of gas. It was Toyota’s first plug-in, and now there’s another—the 2021 RAV4 Prime.

Using its best-selling model to launch another plug-in makes complete sense and with the successful Mitsubishi Outlander PHEV and the newly launched Ford Escape plug-in hybrid, the timing is right.

The good news is that I can easily tell you that the RAV4 Prime is an excellent vehicle. The bad news is you might not be able to get your hands on one just yet. Limited availability will see most of the first batch going to Quebec and then B.C., due to higher demand there. 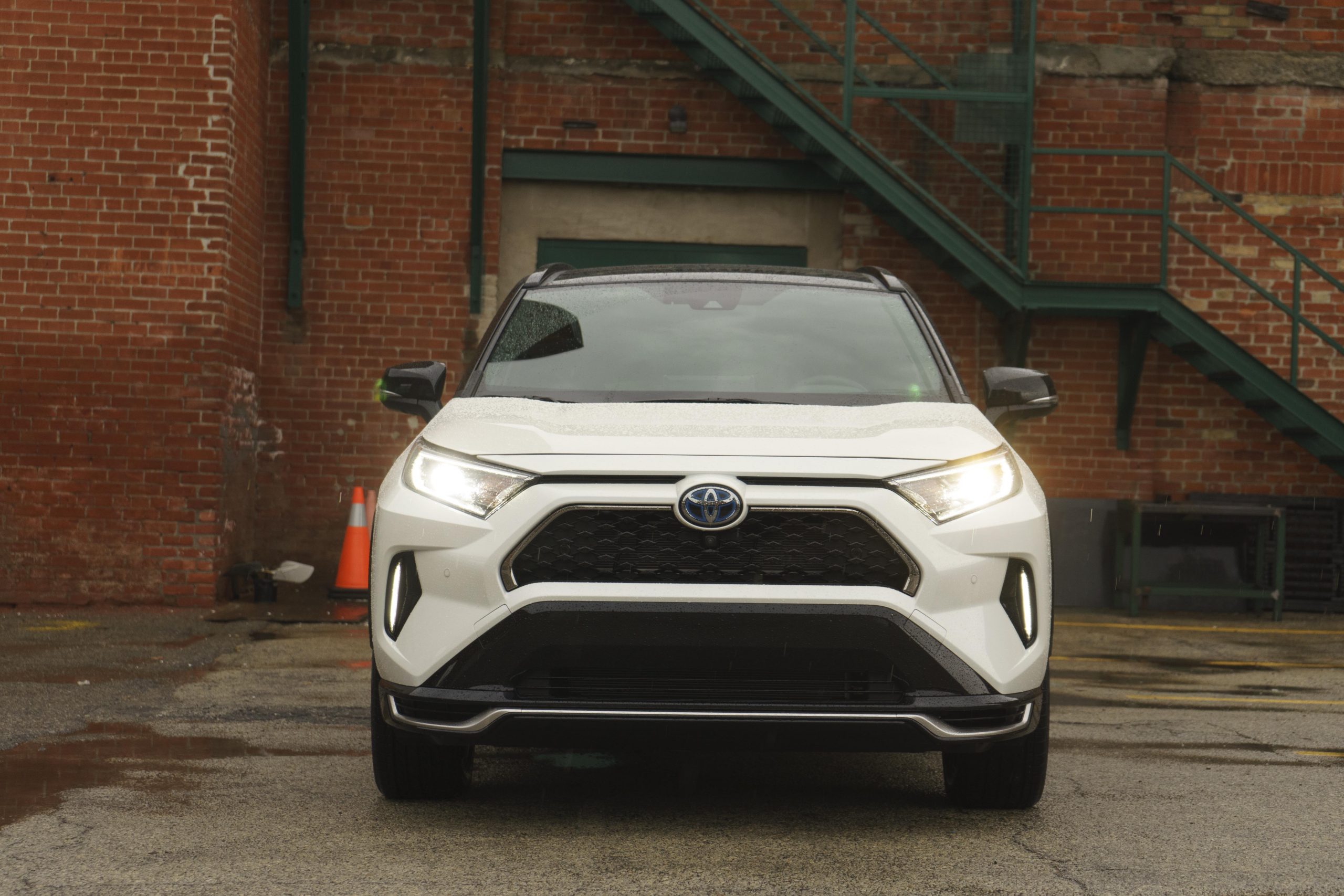 If you have to have one you’ll likely be waiting till next year and it will qualify for the $5000 federal EV incentive with the Prime SE ringing in at $44,990. It’s still decent value for what you’re getting even though Ontario doesn’t offer any provincial incentives like Quebec and B.C.

The Prime XSE ($51,950 before incentives) adds unique 19-inch wheels, a 9-inch touchscreen, a black roof, a power tailgate, and a black interior with sporty red stitching.

A premium technology package can be added to the XSE, equipping it with a panoramic moonroof, an excellent JBL audio system, adaptive front lighting, and heated and ventilated front seats. You also get a head-up display, and a bird’s eye view camera system.

My XSE tester with the tech pack rang in at a lofty $59,215 after freight and fees, a lot for a RAV4. The upcoming Escape plug-in and the current Outlander PHEV are both cheaper to start. Although, it should be noted that both of them are down nearly 100 hp to the Toyota, which has nearly double the electric range of the Mitsubishi. 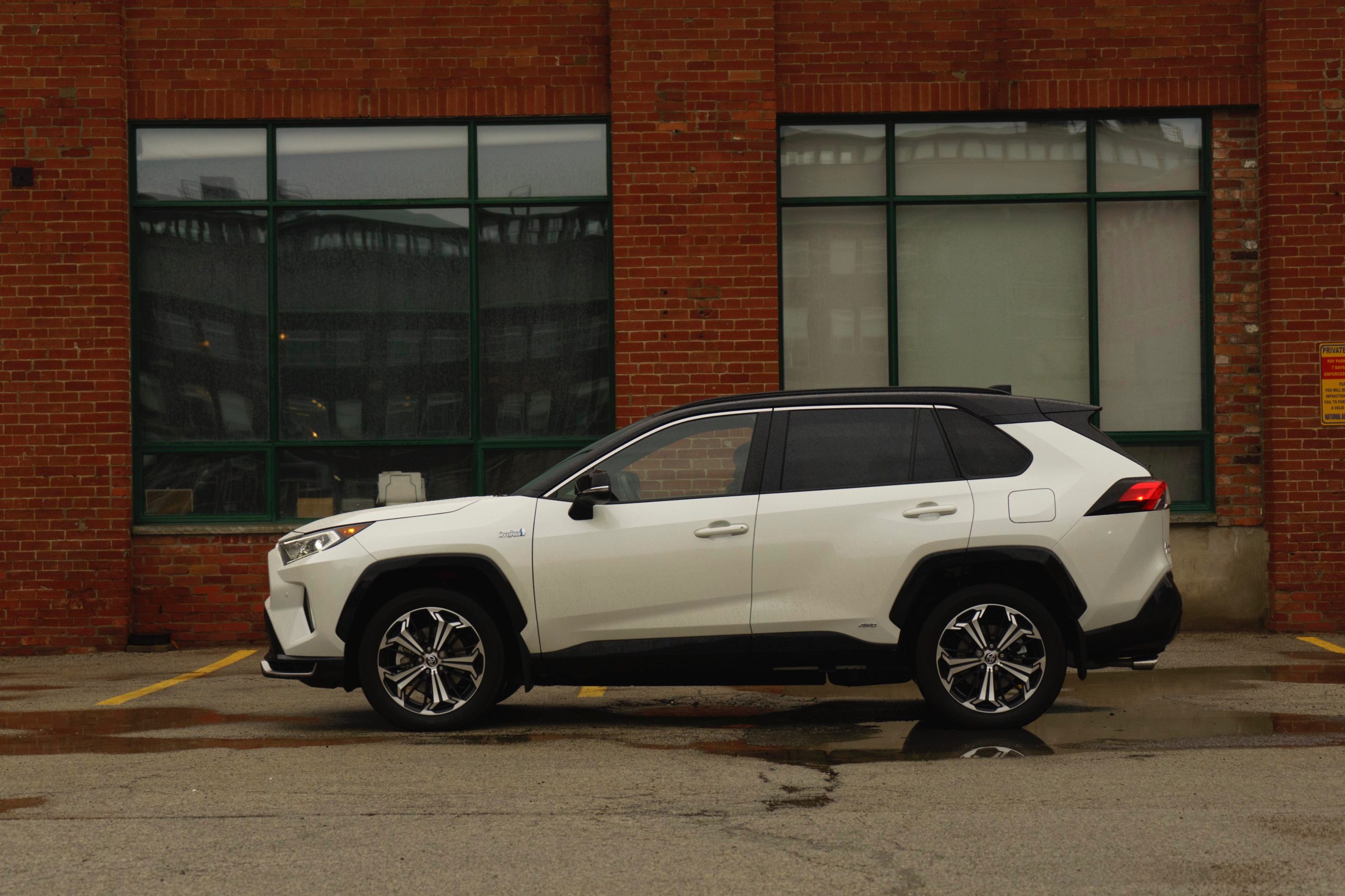 The Prime’s powertrain starts with the familiar 2.5-L 4-cylinder found in the RAV4 Hybrid but tuned for higher output. The front motor is larger at 134kW while the one on the rear axle remains the same size. Total power output is 302 hp—83 more than a standard RAV4 hybrid.

A much larger 18.1 kWh battery pack, cooled with refrigerant from the A/C, supplies power to the EV motors and also gives the RAV4 68 km of electric, emission-free range—the most in its class. Combine that with the gasoline in the tank and the RAV4 Prime can travel nearly 1000 km between fill-ups.

Charging via a typical 110V household plug point will take 12 hours. If using a more powerful 240V charger that drops to around 4 ½ hours while the Prime XSE can charge fully in 2 ½ hours using its 6.6 kW onboard charger.

From behind the wheel, the experience is nearly identical to the regular RAV4 Hybrid with a few notable differences: it stays in EV mode much longer and there’s a glut of power that’s unexpected in this class of vehicle.

If you start your day with a fully charged battery and only have a short commute that falls within the 68-km threshold you could theoretically get away without ever using a drop of fuel. 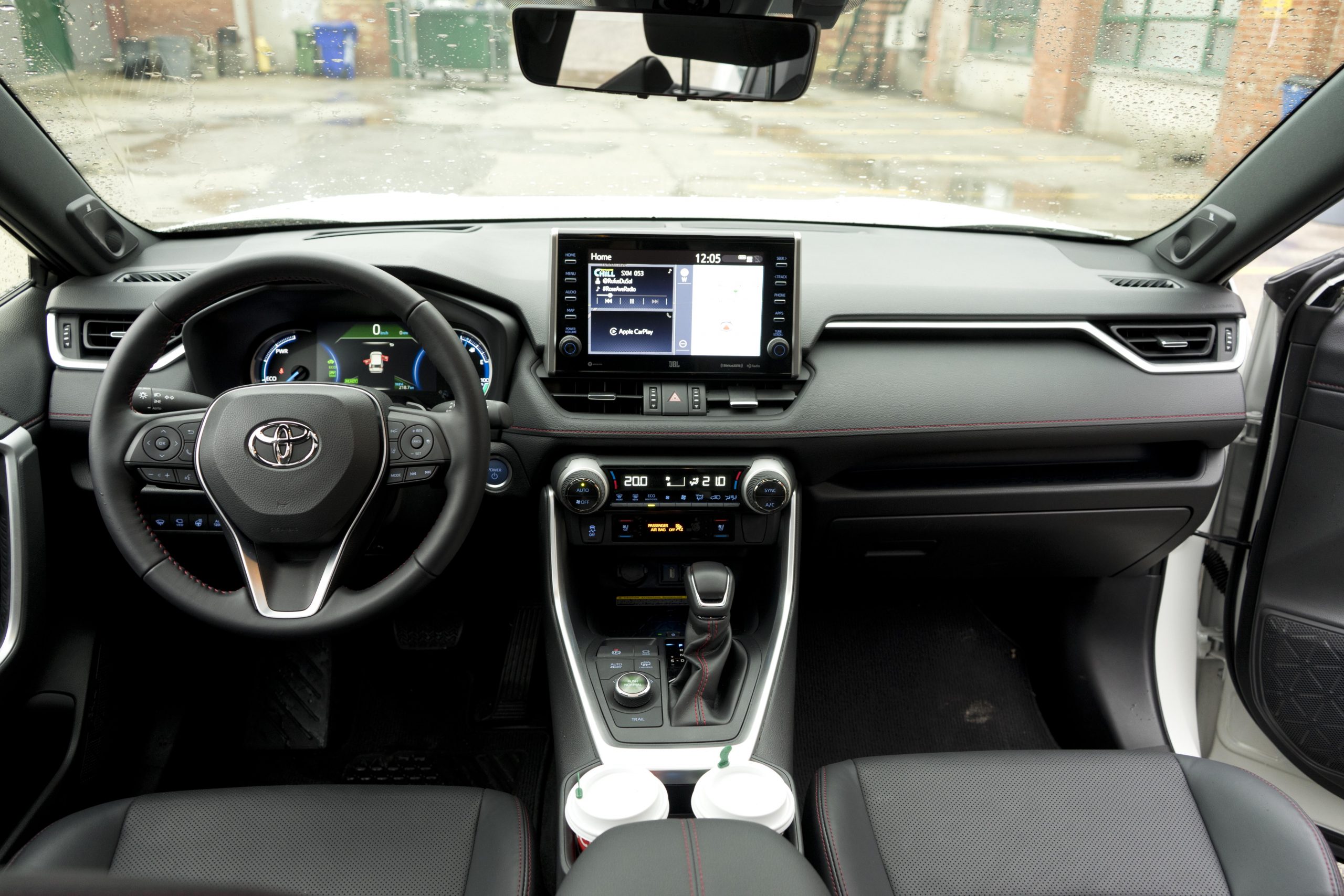 On electric power alone the RAV4 prime is hushed and remarkably smooth with ample torque off the line and a top speed that’s limited to 135 km/h. Kick down hard on the throttle pedal, however, and the 2.5-L 4-cylinder will spring to life and help punt this compact crossover down the road with enough force to push you back into your seat. In one instance a quick stab of throttle actually chirped the tires.

You can also force the Prime into EV mode and it will not ignite the gas engine no matter how hard you hit the throttle; you can run it exclusively in hybrid mode, much like the regular RAV4 hybrid, or you can leave it in Auto and let the computers decide on the best blend of gas and electric power for your trip. Like other plug-in hybrids there’s also a mode that will charge the battery pack using the engine if you don’t have access to a plug point and still want to run in EV mode. Without the opportunity to plug in every day I still achieved a remarkable average of 5 L per 100 km over the course of a week. 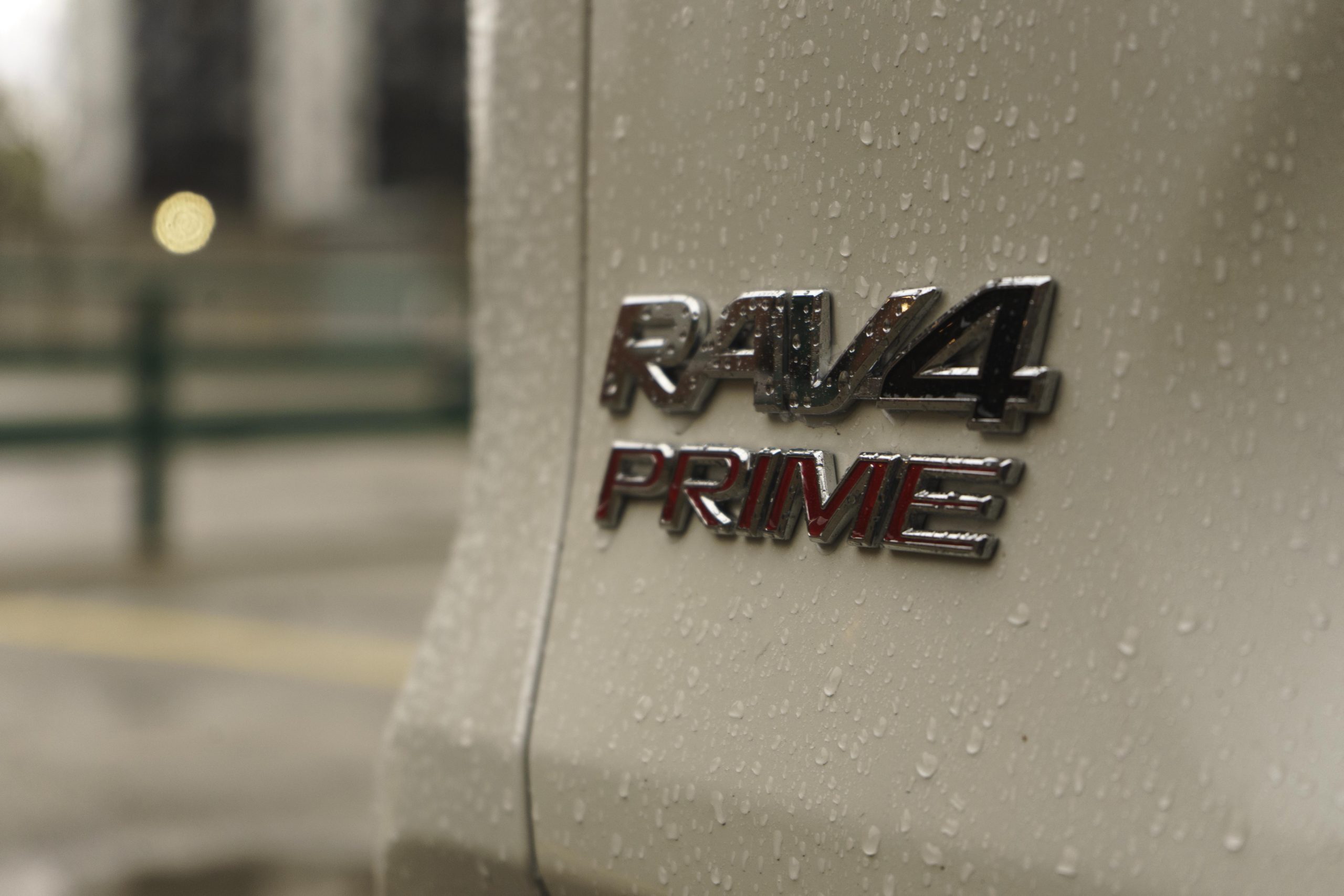 Toyota states that with a 0-100 km/h time of just 6 seconds, the Prime is the second quickest vehicle in their lineup beaten only by the Supra. But unlike that dedicated sports car, the RAV4 Prime is anything but sporty. Dull, lifeless steering and a general disconnect between the road and driver isn’t going to inspire anyone to look for twisty roads. Brakes are initially soft but then quite grabby as you push the pedal further down and take a bit of getting used to.

The Prime is a pleasant drive with excellent seats and a spacious, thoughtfully designed cabin. Big rubberized knobs, quality materials, and ample storage make this a great place to spend time. The extra batteries and hybrid components don’t take away any space from passengers but the cargo area suffers a small hit. With the exception of a few ergonomic niggles like the tuning knob that’s a bit of a reach, the RAV4’s interior space is one the best in this segment.

The biggest hits against the Prime are its lack of availability and the fact the regular hybrid is also an excellent choice. But one thing is for sure, in the super-competitive compact crossover space, the RAV4 Prime is one of the most impressive entries and is sure to be a hit—if you can get your hands on one.