Join the Conversation (0)
“You were drag racing… in a Prius?” asked the incredulous officer in the Jason Bateman comedy Horrible Bosses, staring down the sheepish suspect. His classic comeback: “I don’t win a lot.”

Clearly, in the 20 years since the Toyota Prius hybrid has been sold in North America, it has gained a well-earned reputation for not-very-dynamic performance. But the gas-electric hatchback has long been known for its fuel-efficiency, reliability and its environmental sensitivity too.

Yet right around the time that movie came out in 2011, back when Hummers were thirsty internal combustion V8 brutes, the Prius also arguably lost its long-time environmental pedestal as well.

That was the year that the all-electric Nissan Leaf hatchback appeared on the Canadian market, soon to be followed by other similar-sized five-door EVs with no tailpipes. Environmentally conscious buyers therefore had a few zero emissions options, ones with much smoother and quieter powertrains, zippier acceleration, and at least back then in the three most populous provinces, an EV government rebate that helped reduce their extra cost (though not quite down to Prius levels).

Fast forward to now, and, Toyota has somewhat shifted its approach in its latest generation now of hybrid models. The company has moved away from offering different sizes of the Prius (RIP Prius-V and small -c) to widening the availability of its hybrid system onto many of Toyota’s mainstream models, including its popular RAV4 crossover, Sienna minivan and Corolla, on top of Camry and Highlander Hybrids launched long ago. The Prius family is now down to the regular front-wheel drive Prius, the plug-in Prius Prime that offers up to 40 km of all-electric range, and now the all-wheel drive AWD-e, as tested here. 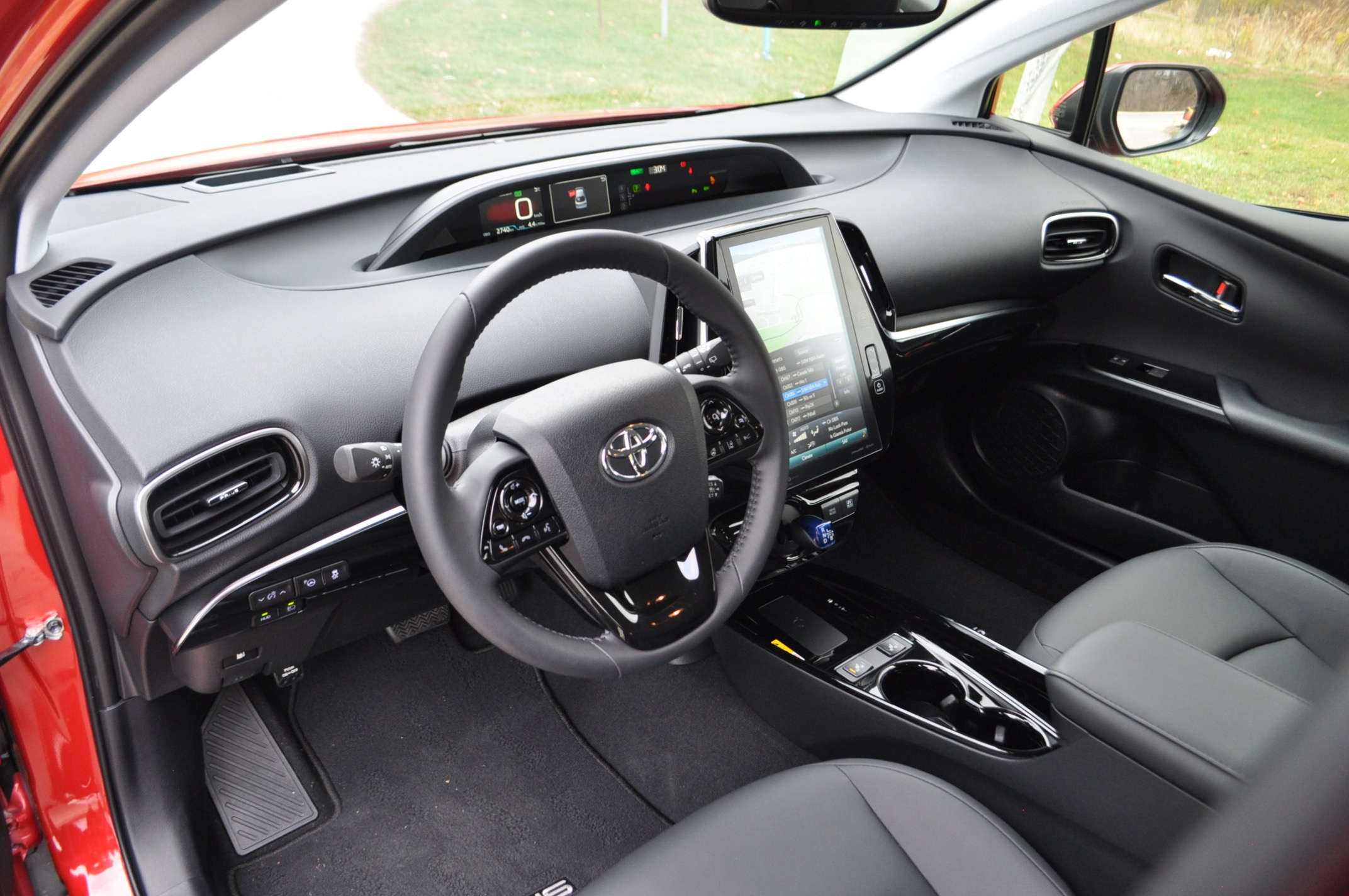 For 2021, the AWD-e system is available in either the base $28,650 Prius, for roughly another $1,040, or on the $32,050 Technology models, which also adds rain-sensing wipers and wireless phone charging to the standard heated front seats and smart key entry. Android phone users take note: these two trims are newly compatible with Android Auto software for 2021. But if you opt for the top Advanced AWD-e option package, it deletes Android Auto compatibility, for some reason.

That’s unfortunate, because this Advanced AWD-e option package makes the Prius almost as space-age inside as it looks outside, but in a more upscale, positive way. It makes the centre screen a massive vertical 11.6-inch tablet, adds a Heads Up Display (HUD), a garage door opener, adaptive headlights, and an automatic parking system. Thus equipped, this tester came out to an as tested price after freight, options and other mandatory costs of $37,472.

Even outside the lack of Android Auto for this top model, there are some other head-scratching feature decisions with the Prius AWD-e. Want a power driver’s seat in your top-of-the-line Prius? Sorry, not available in the all-wheel drive model. Power sunroof? Ditto. But both are available on front-wheel drive Prius Technology models, perhaps to justify its identical $32,050 MSRP to the Technology AWD-e model.

The Prius comes in a compact body style that’s slightly shorter and narrower than a Corolla Hybrid, but officially provides mid-size interior room. This translates to almost double the cargo space (697 litres) to that Corolla (371), and more passenger room in general than the more upscale Lexus UX 250h hybrid crossover. Granted, rear seat legroom is more generous in the Corolla Hybrid, but otherwise, the Prius AWD-e lines up just ahead in interior space to its distant Lexus hybrid cousin, but below the new Ford Escape Hybrid AWD.

The unique dash-mounted shifter, heated steering wheel and wireless charge pad also help afford a high-tech sheen to the Prius, as does the complete silence once the car’s started. Sadly, this silence doesn’t last long, especially with winter temperatures, when you’ll be lucky to get out of your driveway before the raucous engine roars to life. 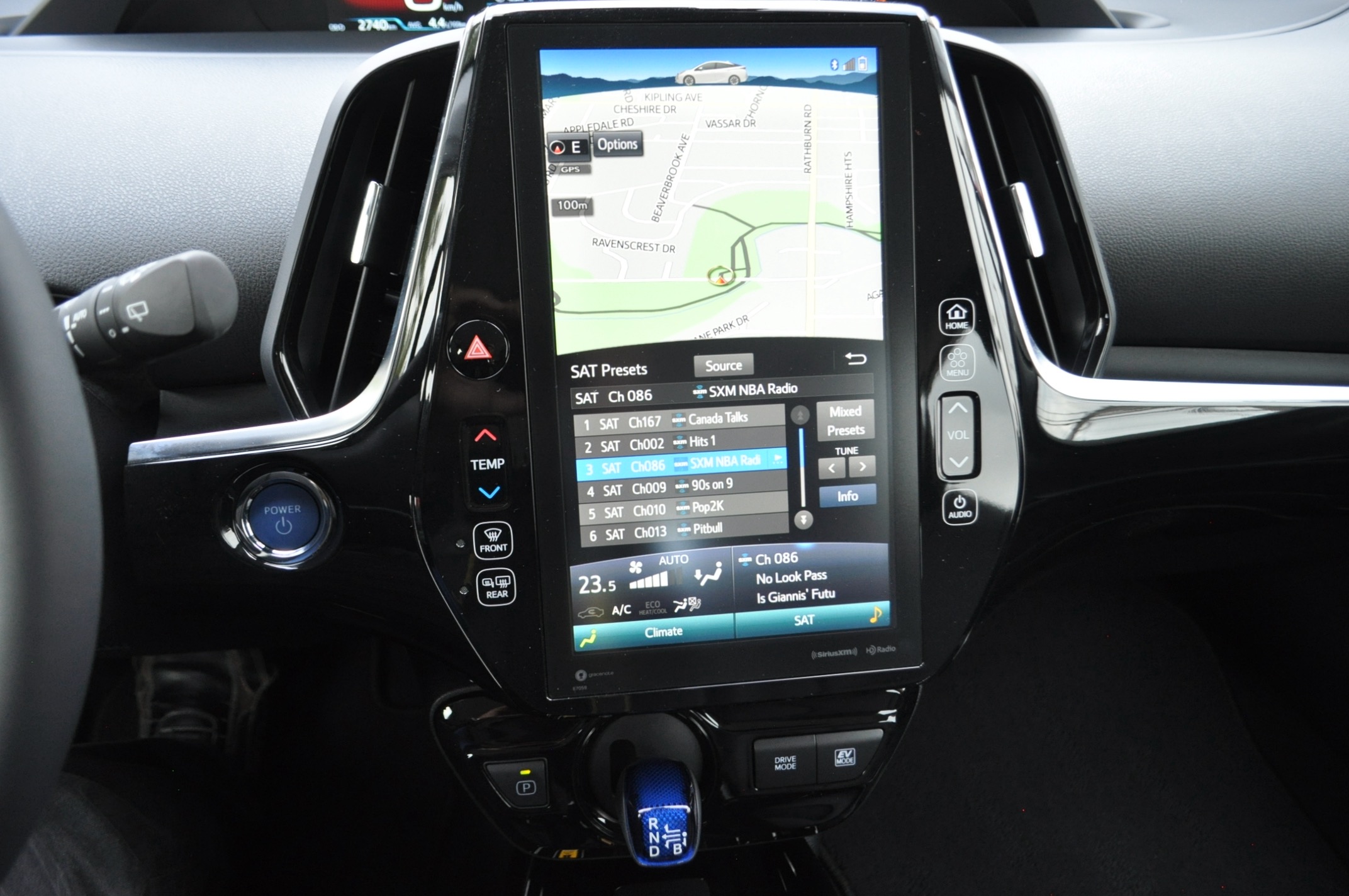 It’s this loud engine noise that kept coming up again and again in my notes, and is the predominant takeaway of driving the Prius. Sure, there’s a nice bit of silence at stop lights, and occasionally while you’re rolling through the drive-through. But this idle silence contrasts even more with the hoarse engine note, to the point where I’m convinced that no base Corolla or Corolla Hybrid would be make this much racket – and both of those start at thousands less than the Prius.

It’s not like I was thrashing it either. At 121 total horsepower generated between the Atkinson-cycle 1.8-litre, 95 hp four-cylinder engine and the small electric motor, and 105 lb-ft of torque, there’s obviously not much straight-line grunt. What’s more disappointing is the other aspects of driving the Prius: the occasionally wooden brake pedal feel, the loosely connected steering, the roughly jarring ride over bumpy urban streets, and the comical lean angles when even mildly entering a highway ramp corner.

Granted, Prius buyers will likely be more impressed with its overall 4.8 L/100km overall fuel efficiency, which is just a touch lower than the similar 4.5 L/100km city/highway combined figure of the front-wheel drive ’21 Prius (and the ’21 Corolla Hybrid, incidentally).

Also impressive is the amount of standard safety equipment on all Prius models. A full-speed dynamic radar cruise control system, with lane departure alert with steering assist and lane tracing functions, pre-collision system with pedestrian and animal detection, plus automatic high beams all work very well together to help avoid crashes on the road.

The all-wheel drive system is a slip and grip arrangement that works primarily from rest to help you get going, adding an extra degree of urban confidence in slippery conditions, though the drivetrain acts mostly in front-wheel drive to help minimize fuel efficiency reductions. When crashes can’t be avoided, there are eight airbags including one for the driver’s knee, plus frontal whiplash protection. 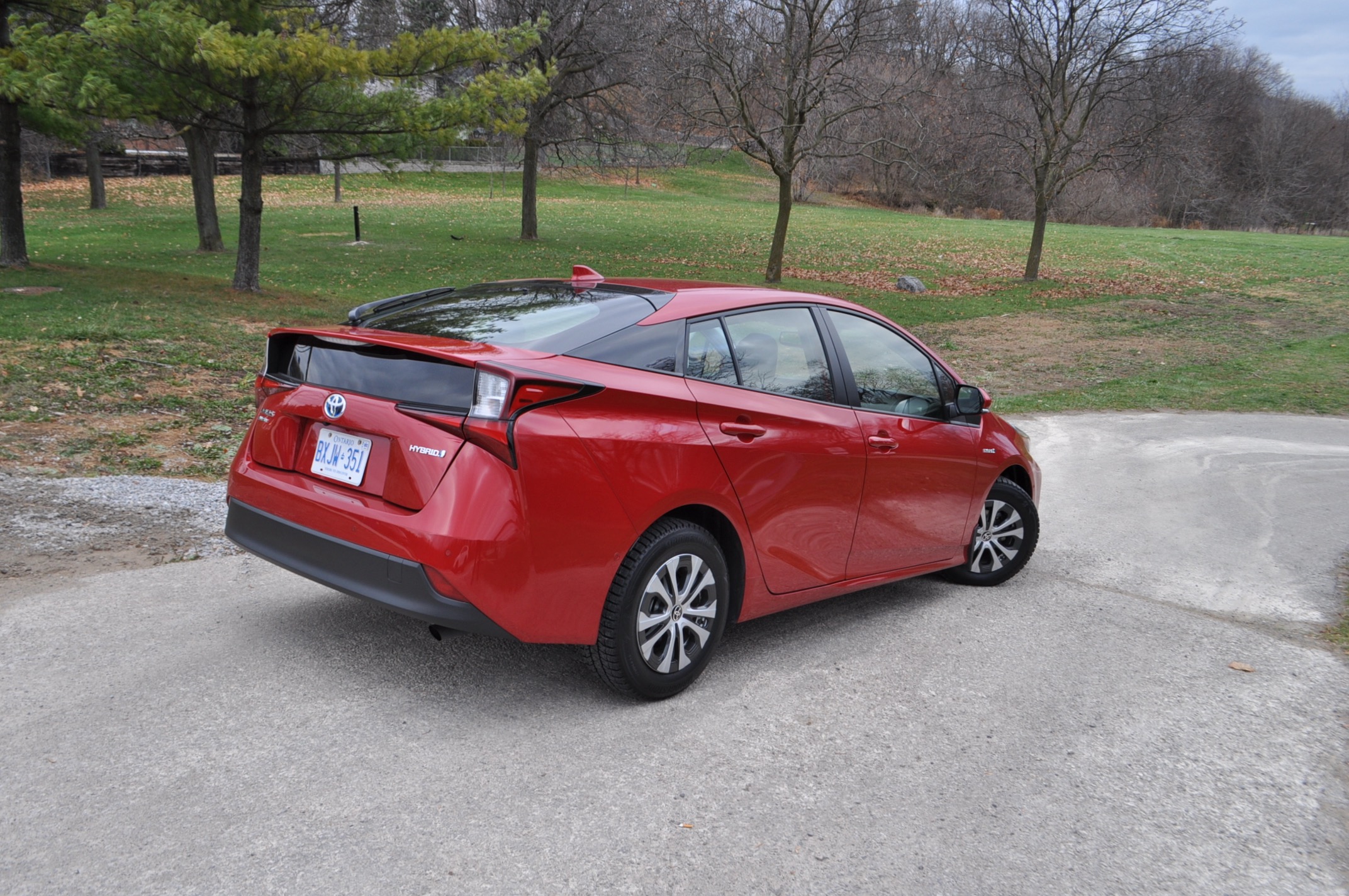 In the end, the 2021 Prius AWD-e offers plenty of interior room and technology, under the hood and inside, but ranks lower on overall refinement, driving dynamics or engine noise insulation. The Prius is just one of many well-known stars that appear in the still-worthwhile Horrible Bosses, some barely known at the time, including a former royal, and multiple Canadian connections. But even if it added to its launch grip, the slightly heavier Prius all-wheel drive model still wouldn’t much improve Bateman’s drag racing odds.