While this may not be the most thrilling ride you can buy, it will give you solid and reliable service

Join the Conversation (0)
Manual transmissions have pretty much gone the way of the dodo bird.

They used to account for over half of all new car sales. That number has dropped to low single digits, as automatics not only offer more ease of driving, but with more ratios - up to 10 speeds - they now often deliver better fuel economy and performance too.

But dedicated SIY'ers - Shift It Yourself-ers - still exist, and for them, Toyota offers a manual gearbox on their popular Corolla sedan and hatchback. It's not just on their cheapest models either, or only in the sedan body style, like the Corolla Hybrid I tested a while back. This time I was in a Corolla sedan in base "L" trim, which is as low as you can go in a Corolla. Pricing starts, and my tester pretty much ended, at $19,150.

Despite this being the entry-level model, Toyota doesn't scrimp on safety gear. Toyota Safety Sense 2.0 is standard, bringing such things as collision avoidance and/or mitigation, vehicle and pedestrian detection in daylight and low-light situations, and cyclist detection in daytime. 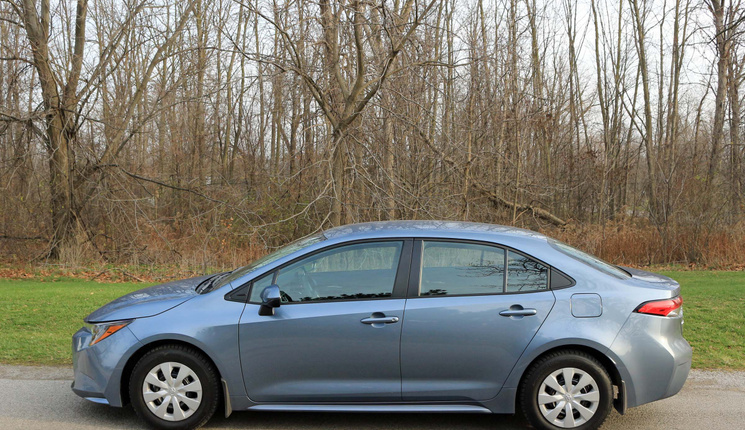 It offers compatibility with Android Auto and Apple CarPlay, and automatically dimming high beam headlights. It even has a back-up camera.

It also has a bunch of driving assistance systems, like lane keeping and blind-spot monitoring. If you wish, you can shut these off. Speaking of shutting off, I first feared this car had the dreaded beeper that warns you to shut the headlights off when you shut the car off. The car should just shut the headlights off automatically. I discovered that if you ignore this warning on the Corolla and just walk away, the car does it for you after 30 seconds.

Something we are seeing less often now, but was here in the Corolla, is a proper ignition key. That mean fewer worries about dropping today’s modern ignition keys down between the seats, or having your partner drive off with the key still in your pocket and they can't restart the car when they get home. Sadly, the Corolla L offers neither heated seats nor heated steering wheel, although they do come in pricier models. I sometimes wonder why Transport Canada does make heated seats mandatory in Canada. Winter gets mighty cold in some parts of this vast country.

The 1.8-litre engine has more power than the Hybrid, and offers surprisingly good performance.

It's also commendably quiet, even as revs rise above five grand. At first I found clutch engagement pulling away from rest a bit tricky and the throttle return spring very light. So its best go easy. I can say that this became better with a bit of practice. 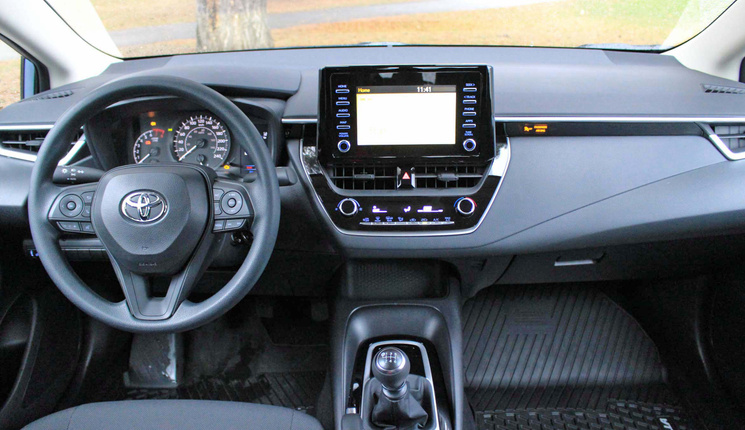 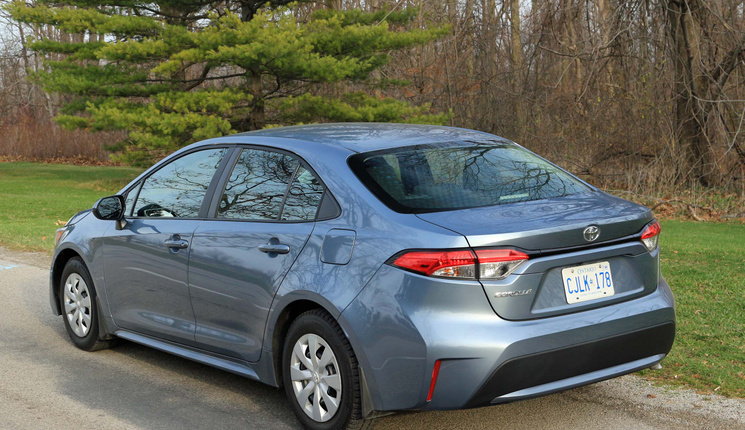 The gearbox itself is excellent - light, direct and precise. This car would be a good one in which to learn how to drive a stick, in my opinion.

Because this model doesn't have the heavy battery and electric motor of the Hybrid, the car's suspension doesn't have to be beefed up to handle the extra load, which amounts to about 80 kg. My recollection is that the Hybrid rode more harshly than the base car, which was also carrying the handicap of having winter tires. There was more road and wind noise than I recall from the Hybrid. Again, the tires might have been at least partially responsible for the former, and the quiet engine may have allowed more of the latter to sneak through.

The seats are a bit short in cushion length, but the fabric upholstery looked and felt good.

There's decent room in the rear for two riders, three in a pinch, and the trunk is spacious.

I folded down the rear seats as I also do in my own VW, to improve rearward visibility. The thus-expanded cargo hold does not offer a flat floor, but hey - it's not a pickup truck.

While this may not be the most thrilling ride you can buy, it will give you solid and reliable service for a long, long time.

Not a lot wrong with that.