Join the Conversation (1)
Folks, allow me to introduce you to Old Toyota.

I’m being somewhat tongue-in-cheek here, but when discussing a vehicle that has been around since 1984 and whose ancestral roots are still visible, it feels appropriate. The 4Runner spent its first decade-plus as a pick-up with an SUV shell and didn’t move to a unique chassis and body until the third generation model went on sale in 1995.

Since then, the 4Runner has moved further away from its pick-up origins and is now more closely related to the Land Cruiser / Prado / Lexus GX family of body-on-frame SUVs. In fact, the current fifth generation model, which was all-new in 2010 and was significantly facelifted in 2014, shares similar dimensions and rides on the same wheelbase as the GX, although the Lexus has a different powertrain.

Despite being more than a decade old, Toyota has taken steps to modernize the 4Runner, most notably with the addition of Toyota Safety Sense P, which is standard on all models as of 2020. This suite of tech includes pre-collision system, lane departure alert, automatic high beams and dynamic radar cruise control (high speed). 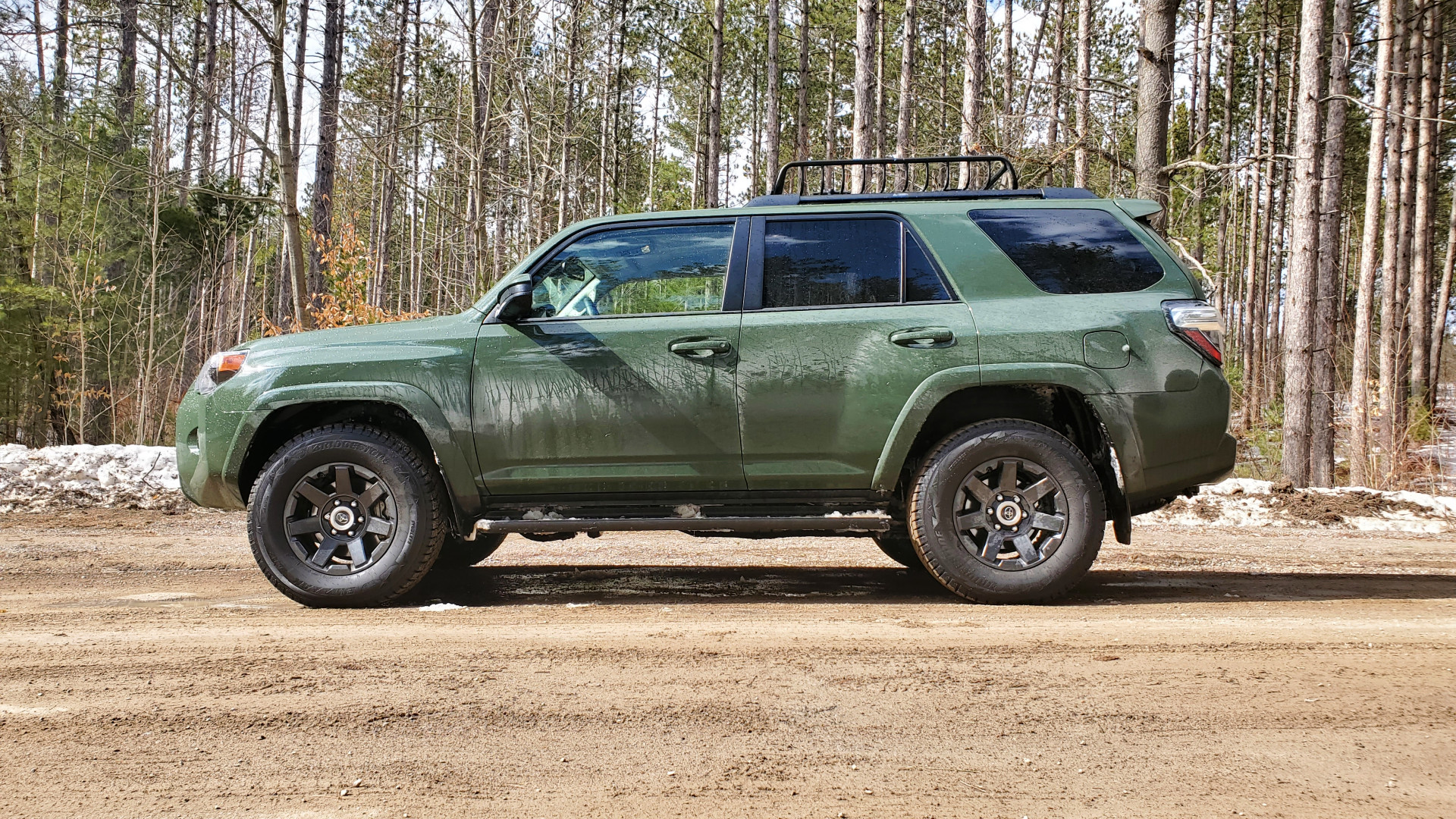 For 2021, there are only two distinct 4Runner models sold in Canada, but there are several option packages available. When those are accounted for, plus the two primary Trail and SR5 grades, the number of unique 4Runners rises to seven. It should be noted, the five option packages (TRD Off Road, Limited 7 Passenger, Venture, Nightshade 7 Passenger and TRD Pro) are only available for the SR5.

A Toyota Canada product planner told me the Trail was conceived partially to offset the 4Runner’s rising MSRP in recent years, but also to provide consumers with a unique option rather than just a stripped-down base model designed to compete on price alone.

The Trail foregoes many of the creature comforts that will undoubtedly turn some buyers off, but if heated seats and in-dash navigation are must-haves, SR5 option packages await. The Trail does, however, come equipped with standard Apple CarPlay and Android Auto and an eight-inch multimedia touchscreen to satisfy navigation needs.

It’s also worth noting that regardless of which 4Runner model / trim package you choose, the powertrain doesn’t change: 4.0-litre V6 (270 hp / 278 lb-ft) paired with a five-speed automatic and standard part-time four-wheel drive. In this regard, the Trail’s appeal is enhanced, as it offers just as much capability as the $62,430 TRD Pro. 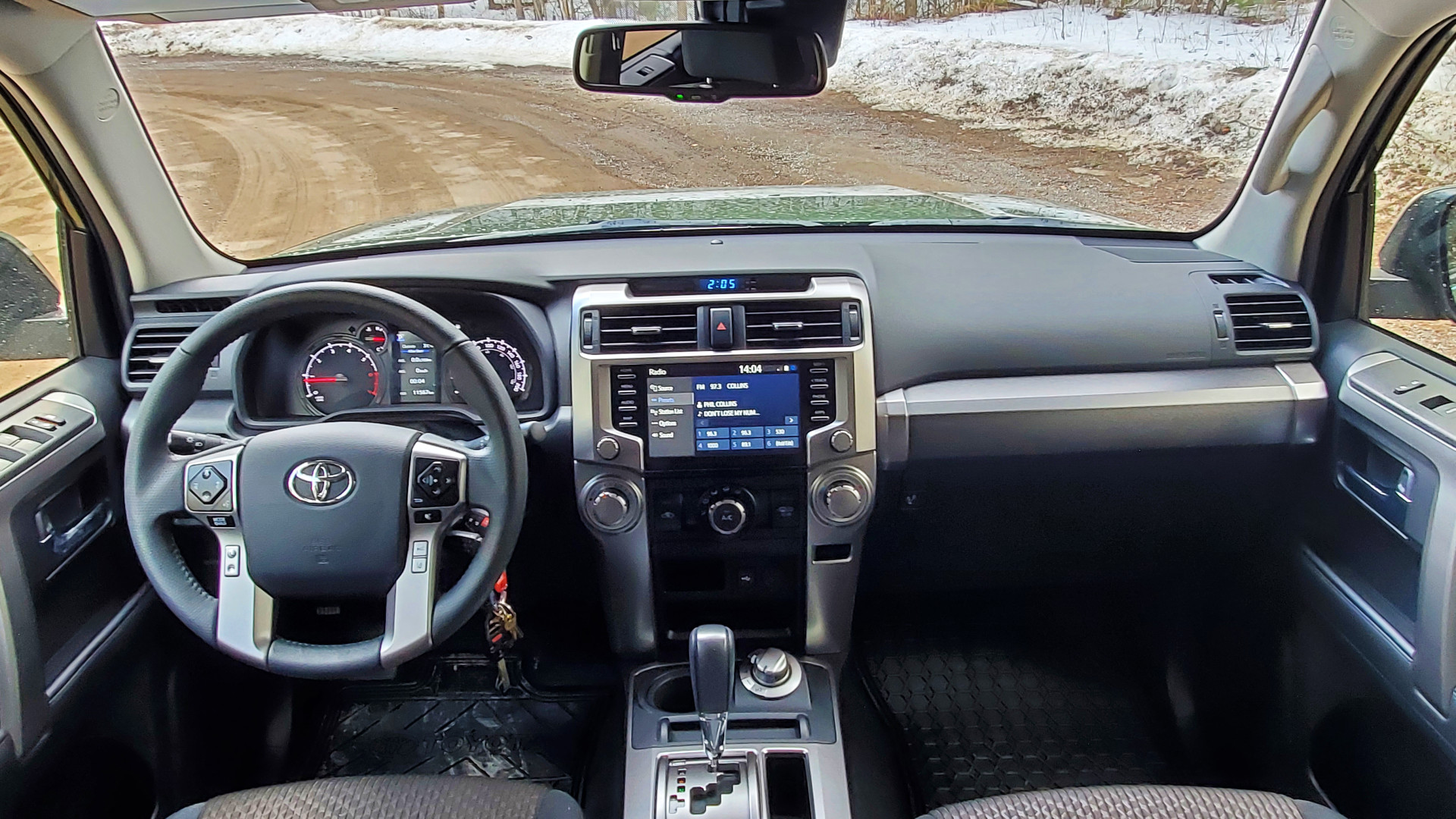 As for the aesthetic, it’s a 4Runner. It’s a box on wheels with an interior that is comfortable and roomy, with excellent visibility and a user-friendly dash and centre console layout. True, some details, like the liberal application of hard plastics and a 1980s-vintage calculator screen clock are examples of blatant cost cutting, but that’s typical of entry-level models. It doesn’t bother me much, honestly.

Maybe it’s my aging Gen X brain, but there’s something about this army green 4Runner I find comforting. It’s like a time machine that transports me back to an era when all cars were this way. Yeah, there’s a lot of stuff missing, but most of the cars I’ve owned were like that, including my current decade-old car.

Now don’t get me wrong, this 4Runner is a modern vehicle, certainly with respect to safety, but it still feels like it’s from another time. Its V6 roars to life at start-up, it drives and handles like a truck and it has truck-like fuel efficiency (translation: not great). It takes a while to get moving off the line, it can feel floaty at times at speed and the ride can be jittery.

But the 4Runner’s off-road credentials are legit, as I discovered when I took my tester on a six-kilometre trek on a muddy, snow and slush covered country road north of Bowmanville, Ontario. This road is popular with ATVs, dirt bikes and snowmobiles, as well as off-road trucks and SUVs, and it’s an ideal setting for the 4Runner.

I pushed my tester along this bumpy, sloppy terrain with ease, after dialling its 4WD system with locking rear differential into 4 hi. With 249 mm (9.8 inches) of ground clearance, and 33-degree (front) and 26-degree (rear) departure angles, the 4Runner barrelled through the snow, slush and mud with ease. If off-roading is your game, the 4Runner stands ready. Oh, and if you like to haul stuff, it has a 5,000-pound maximum tow rating. 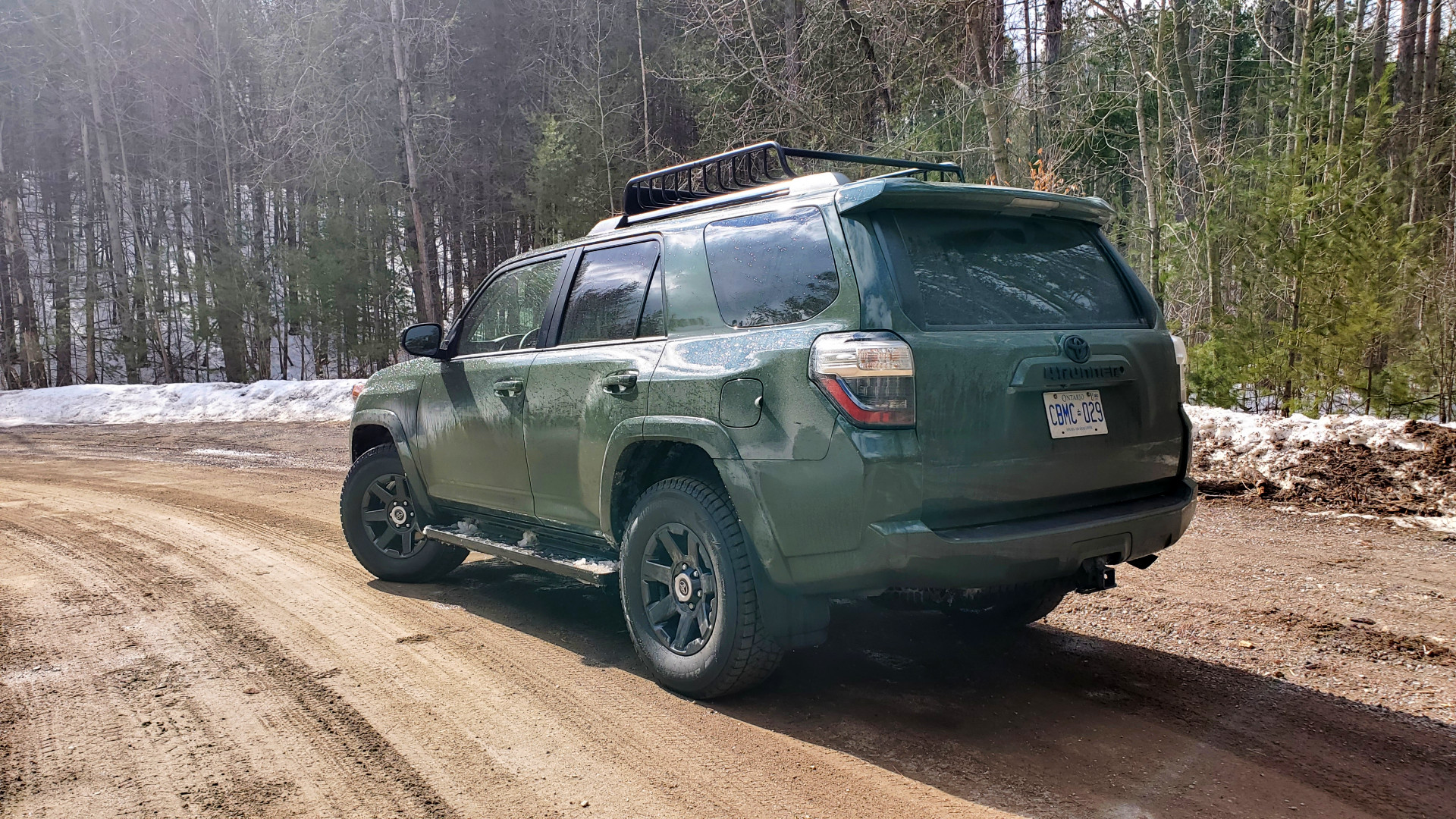 The 4Runner is an anachronism, and when I joked about it’s rather aged aesthetic recently with several Toyota Canada reps, they didn’t exactly disagree. But, despite its age, it enjoys a dedicated following.

Given the current model’s age, the next gen 4Runner can’t be too far off. And when it arrives, it will likely carry an advanced Toyota New Global Architecture (TNGA) structure, with some form of electrification, along with a modernized design and a raft of connected-car content.

Will there be a gas-only Trail variant with an old clock, no heated seats and an ignition cylinder? My guess is probably not, but I’d love to be proven wrong.