With the Plaid, Tesla gives us VIP access to the future of the automobile.

Join the Conversation (5)
Unless you’re a fan of the 1987 space opera parody film “Spaceballs”, you have no idea why the word Plaid was grafted onto an electric car. By definition, the word Plaid (pronounced “plad”) refers to a checkered or tartan twilled cloth, typically made of wool. It’s the kind of stuff you’d typically find on a Scottish kilt, not on a car.

But this is Tesla, a carmaker that has gone out of its way to do things differently since it first appeared in the automotive landscape over a decade ago. Plaid is yet just another troll from billionaire CEO Elon Musk, the modern equivalent of Howard Hughes. It just so happens that Musk is a diehard “Spaceballs” fan.

In the movie, Plaid is the ultimate speed, faster even than the speed of light. It’s even faster than ludicrous speed, another term Tesla has comically given some of its fastest machines in the past.

At Tesla, Plaid signifies the fastest, most hardcore model ever produced to date. And boy does it give one heck of a ride. In my young career as an automotive journalist, I have had the opportunity of launching Lamborghinis, McLarens, Hellcats, and Porsche Taycans. I’ve even had a few giggles behind the wheel of some of Tesla’s Ludicrous models. Yet, nothing has prepared me for the experience of a Plaid. This thing is on an entirely new level.

While all Teslas keep themselves fresh via over the air updates, the Model S finally gets its first real model overhaul since it was released back in 2012. To keep it in sync with its most recent offerings, the Model 3 and Model Y, Tesla brings a slew of significant updates to its flagship sedan.

From a design standpoint, the car doesn’t change much, except for a slight massaging of its front and rear facias, wider tires, and different wheels. The biggest changes lie underneath the sheet metal and inside the cabin.

Plaid now replaces the old Performance trim. While its battery is essentially the same 100 kWh unit as before (with Panasonic’s legacy 18 650 cells), Tesla considerably improved its cooling and cranked the voltage from 400 to 460 volts. This allows the battery pack to release its power a lot quicker and with more intensity.

The Plaid also utilizes Tesla’s all-new Tri Motor technology; essentially three permanent magnet reluctance units (two in the rear, one in the front), like the ones used in the Model 3 and Model Y. Tesla reinforced the rotors with carbon fiber to reduce inertia at high speeds. Those rear motors also yield torque vectoring for improved cornering.

The numbers that have spawned from such hardware are unreal to say to least. Total combined output is rated at an Earth-shattering 1,020 horsepower and 1,050 lb-ft of torque. What’s even more astonishing is how fast the Plaid leaps out of the hole. Tesla boasts a zero to 100 km/h time of 2.1 seconds, a quarter mile time 9.23 seconds at 249 km/h (155 mph), and a manufacturer claimed top speed of 322 km/h. This puts Tesla’s sport sedan up there among the fastest production automobiles in the world, only to be slightly beaten by the Rimac Nevera. 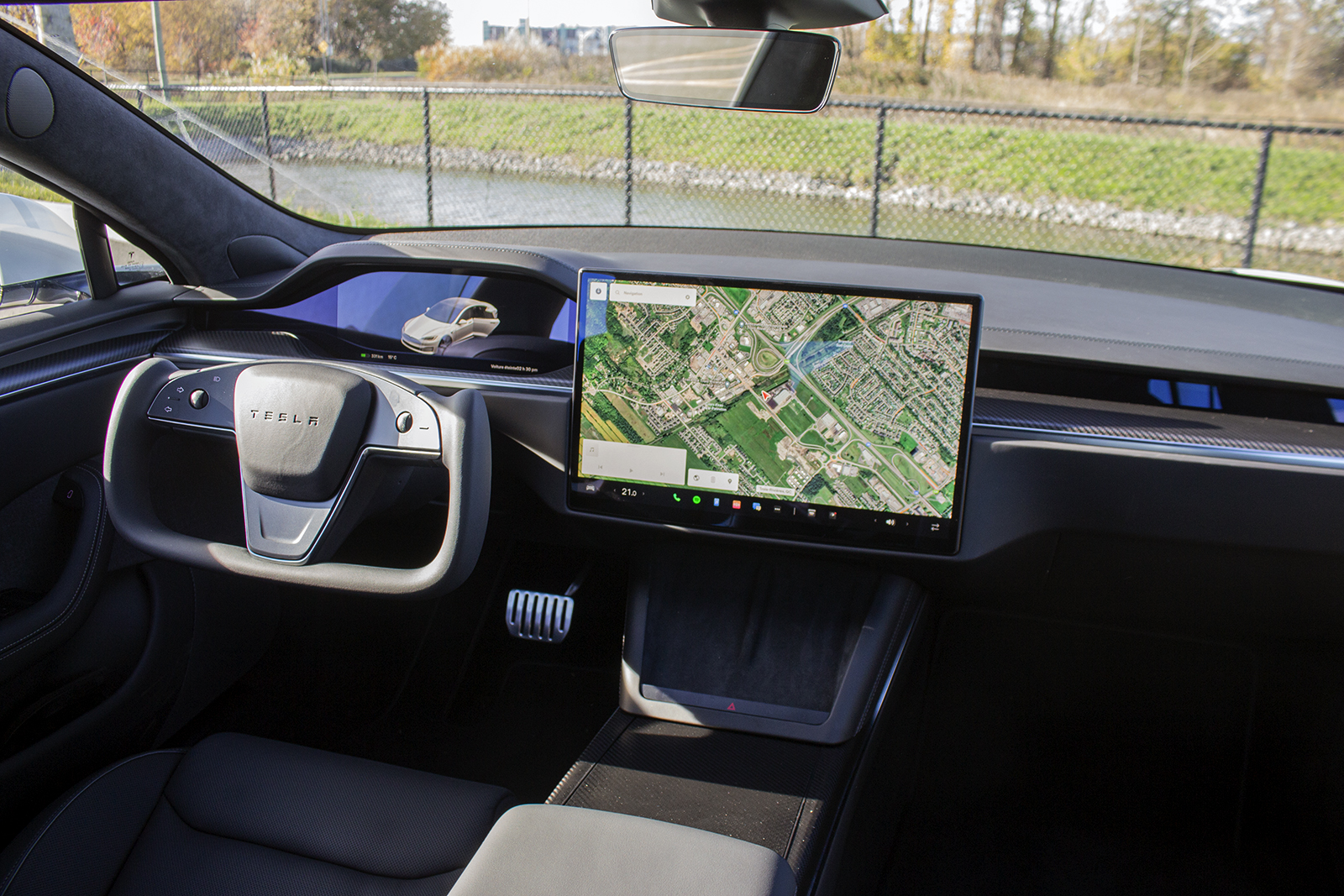 Except, contrary to the Rimac’s $2.4 million sticker price, the Model S Plaid sells for a hair under $170,000. I’ve driven a BMW 7 Series with a similar price tag before, but even its twin-turbocharged V12 can’t keep up with this electric monster.

Obviously, a Tesla Model S doesn’t offer the same kind of luxury as a BMW 7 Series, or any full-size German executive sedan for that matter, but the updates do allow it to be a substantially more enjoyable place to spend some time in than before.

Build quality is vastly improved, and so are the materials. Alcantara is used for the headliner, and there’s a neat spongy texture that covers the dashboard. Seats are also redesigned and a step above prior attempts for overall support and comfort, both front and rear. The Model S also continues to be a spacious, comfortable, and practical sedan, but you’ll still get a better cabin from a Porsche Taycan.

Unlike a Model 3 and Y, the Model S maintains the classic digital gauge pod, which was redesigned during the facelift. The S also gets a horizontally installed central command screen now to better fit in with the rest of the Tesla family. It’s still a 17-inch unit but gets an updated interface with the possibility to configure widgets to your liking like a smartphone. The entire center console is new, with a deeper storage compartment and new PRND hard buttons located underneath the wireless charging tray.

Where the Model S really strikes out is in its new Yoke steering wheel. It’s indeed a lot to take in at first due to its squared-off shape, appearing like something taken from a GT Snow Racer from the mid-1990s.

Relearning How to Drive

The 2021 Model S ditches all its stalks, meaning that most of the car’s controls have been grouped together on that yoke. Everything, from blinkers to headlights and wipers are now operated via buttons, which force you to rewire your notion of how to drive a car. That yoke takes some time to get used to due to the absence of an upper section, especially in town where parking manoeuvres can quickly become infuriating.

Then there’s the way you put the darn thing into Drive. There are three ways to do so: autonomously, by simply holding the brake pedal and letting the car determine that it’s safe to engage D, through the hard buttons, or through the infotainment system. To reverse, one must slide a tiny car icon downwards (or press R on the hard buttons). That’s not intuitive at all!

To activate the Plaid’s time warp performance, one must first initiate Dragster mode from the infotainment screen. Doing so activates the car’s enhanced cooling systems, which can instantly be heard from inside the cabin. 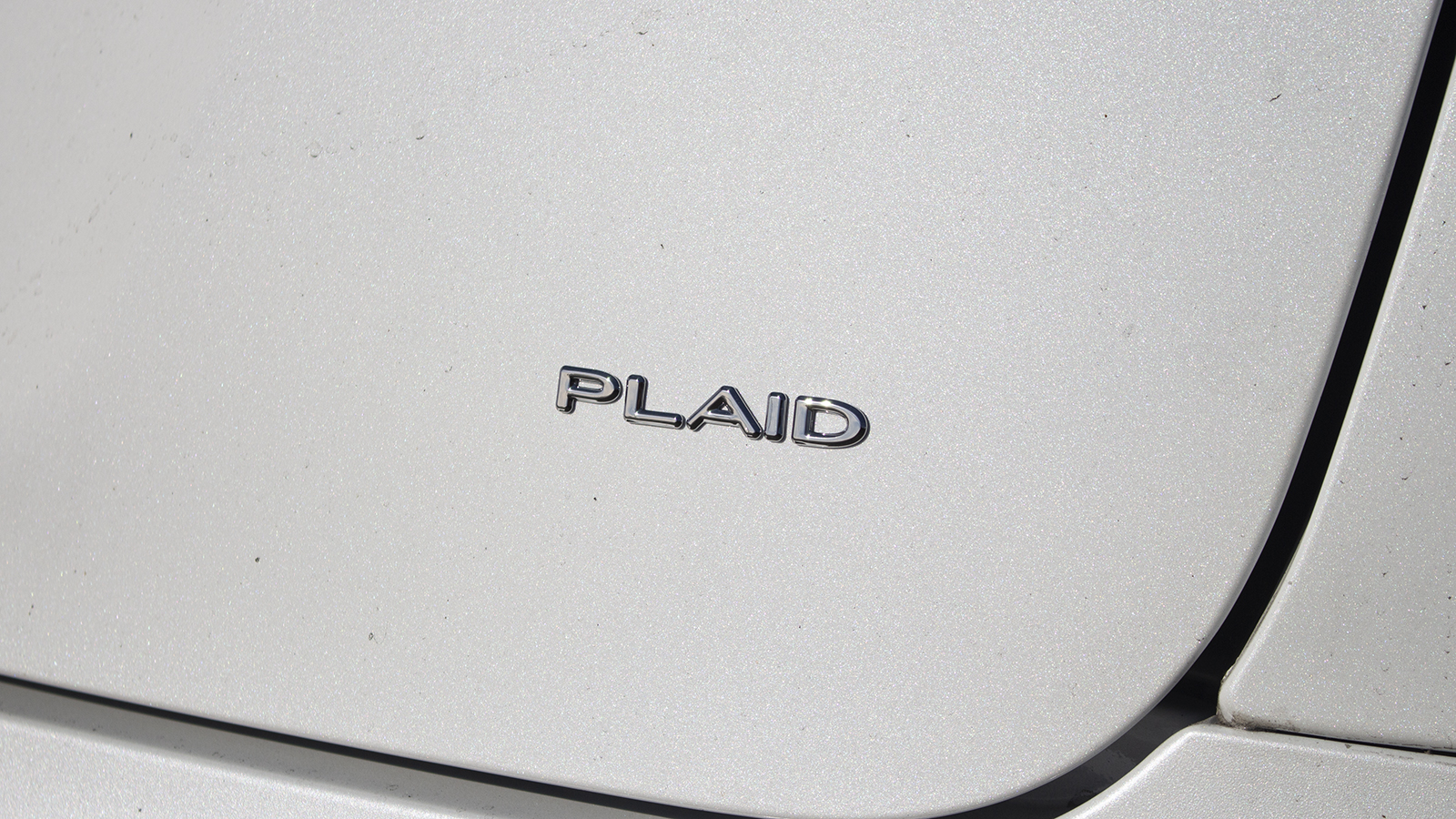 You then need to wait 15 minutes until the Plaid is ready to unleash its fury. Once the cycle is complete, stand on the brake pedal, followed by the throttle, and wait. Doing so will allow the car’s air suspension to take the “Cheetah Stance”. Once you’re ready and firmly hanging onto the Yoke with both hands, release the brake pedal, and you’re gone.

The immediate sensation behind the wheel is a violent shove into your chest, and an unsettling feeling of pressure in the back of your skull, as if your brain has just bounced off of it from the instant forward surge. The next thing you notice is that you’re well over 100 km/h and gaining velocity at indescribable speeds. Meanwhile, the entire instrument cluster is displaying a large Plaid animation, further emphasizing the sense of speed.

The power deliver is relentless, even at the top end. Normally, electric cars start strong, but quickly lose puff at top speed, but not in a Plaid. There’s no fancy two-speed gearbox here like in a Porsche Taycan to ensure top end performance. It’s all done by those three electric motors, further revealing Tesla’s technological advantage. Forget everything you’ve ever driven. A Plaid is faster. 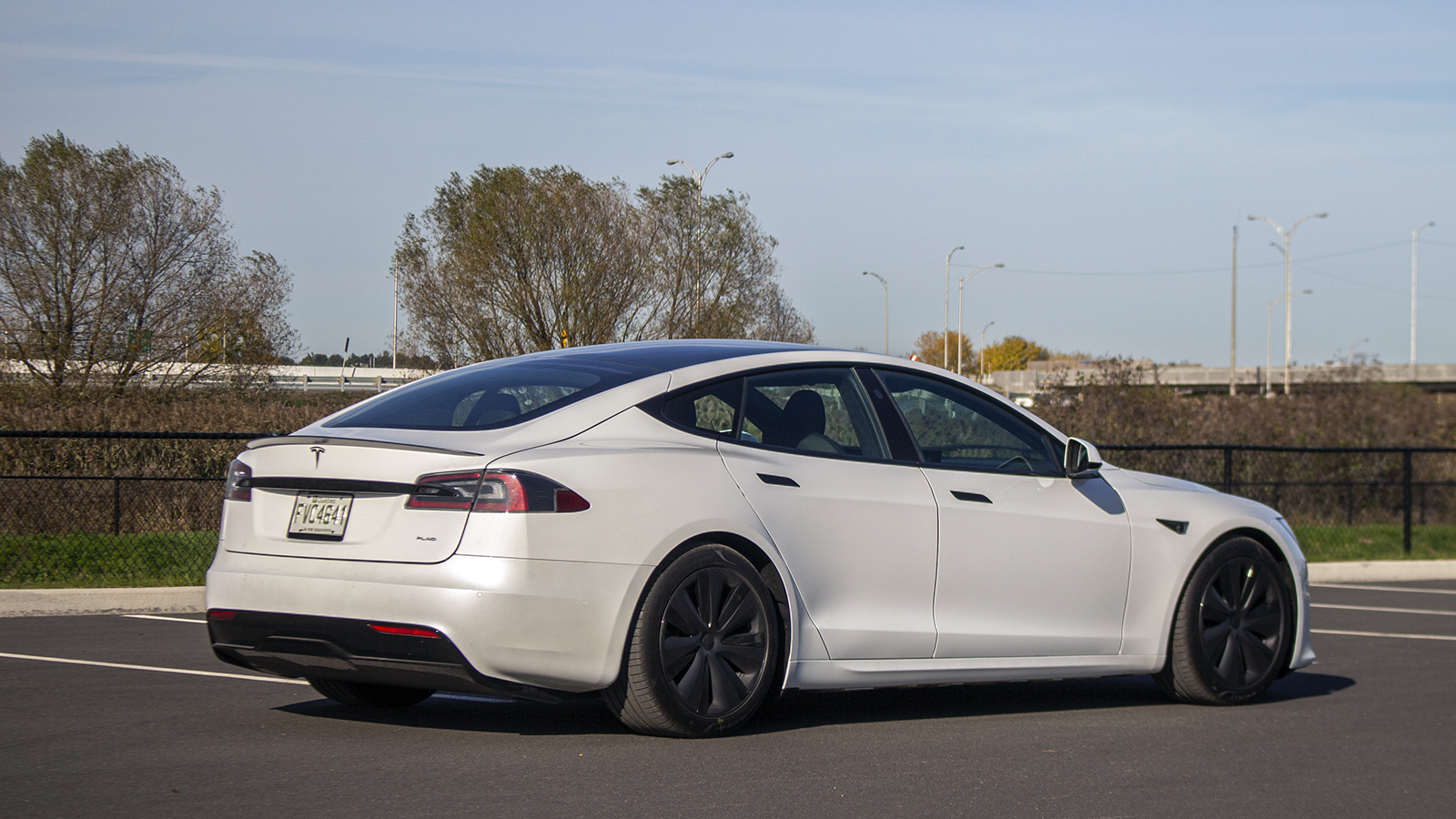 Obviously, with such a hefty price tag, this Tesla isn’t exactly attainable, but it gives us an early glimpse of the future of electric cars. In a single launch control sequence, this unassuming sedan renders the entire automotive industry obsolete. Welcome everyone, to Elon Musk’s psychedelic universe.