Join the Conversation (0)
After seven years, a new WRX STI is on the horizon. We haven’t seen it yet, but rest assured, it’s coming.

Subaru indirectly confirmed a new STI is on the way when it revealed the all-new 2022 WRX last month. While only the WRX was shown, you can rest assured the STI will also carry over into the next generation of Subaru’s rally-inspired sedan. Nothing official yet from Subaru, but yeah, it’s coming – anything less would be truly shocking.

So, with the WRX / STI about to enter a new era, I recently spent a week driving a 2021 STI. To reset, the current gen car has been with us since 2014 (as a 2015 model) and has received only modest updating over the past seven years.

This model, the VA as its known internally, was hived off from the Impreza sedan, which moved to the Subaru Global Platform – an architecture that underpins almost all Subarus these days – when the fifth gen model debuted in 2016. The VA cars, on the other hand, are based on the older fourth gen Impreza, a practice that will end when the next gen models move to the Subaru Global Platform. 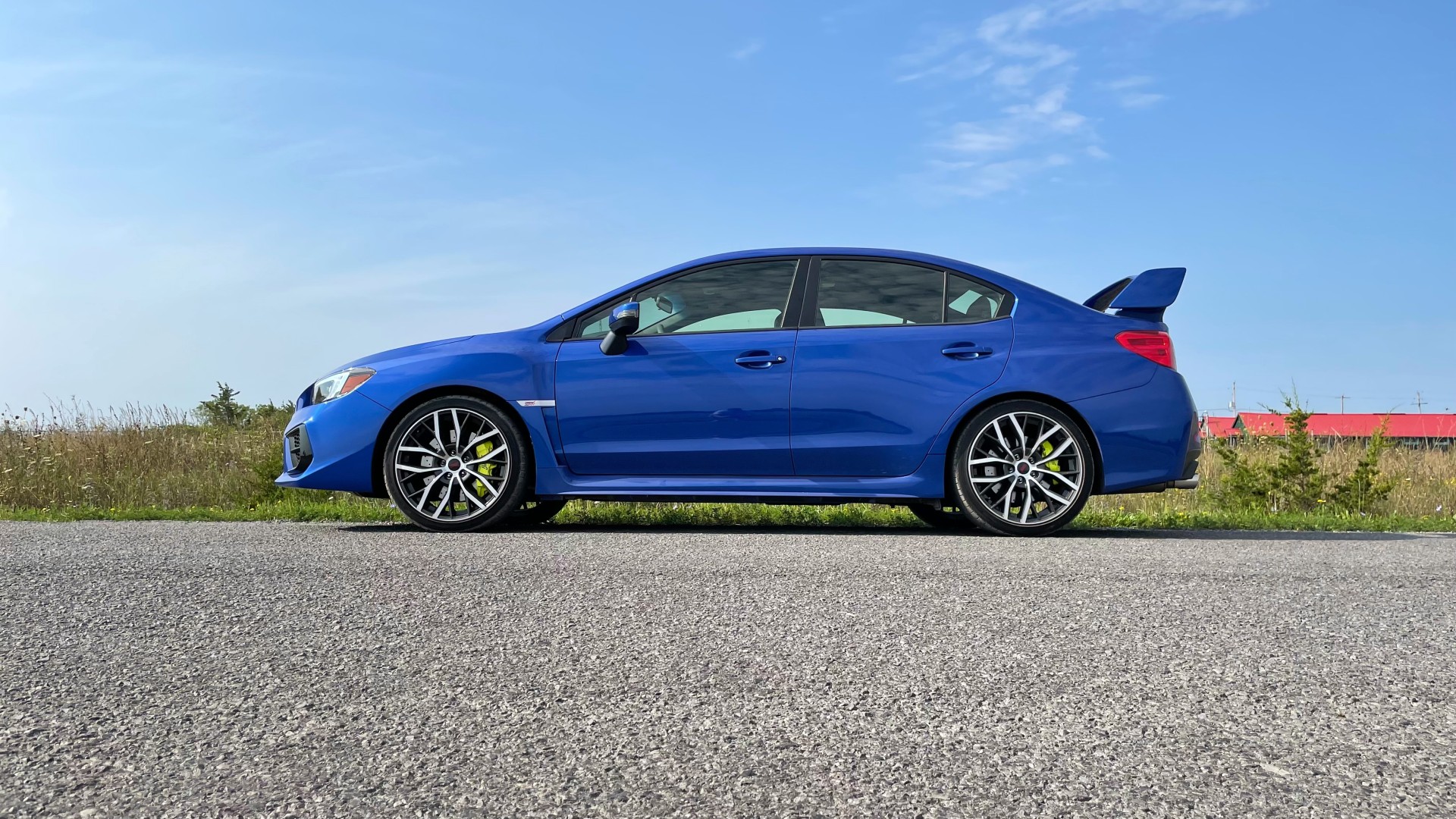 But until the new cars begin arriving next year, we soldier on with the outgoing VA which remains a very capable performance car.

I reviewed the WRX just before the pandemic began in the winter of 2020 and have driven both cars multiple times before on road and track, so I am well aware of their capabilities.

For 2021, the STI carries over with minimal changes. Three models are available: STI, STI Sport and STI Sport-tech with either a Wing Spoiler or a Lip Spoiler. All grades are powered by a 2.5-litre turbocharged Boxer flat four-cylinder engine that produces 310 horsepower and 290 lb-ft. of torque, that is paired with a six-speed manual transmission and Subaru’s symmetrical all-wheel drive system. 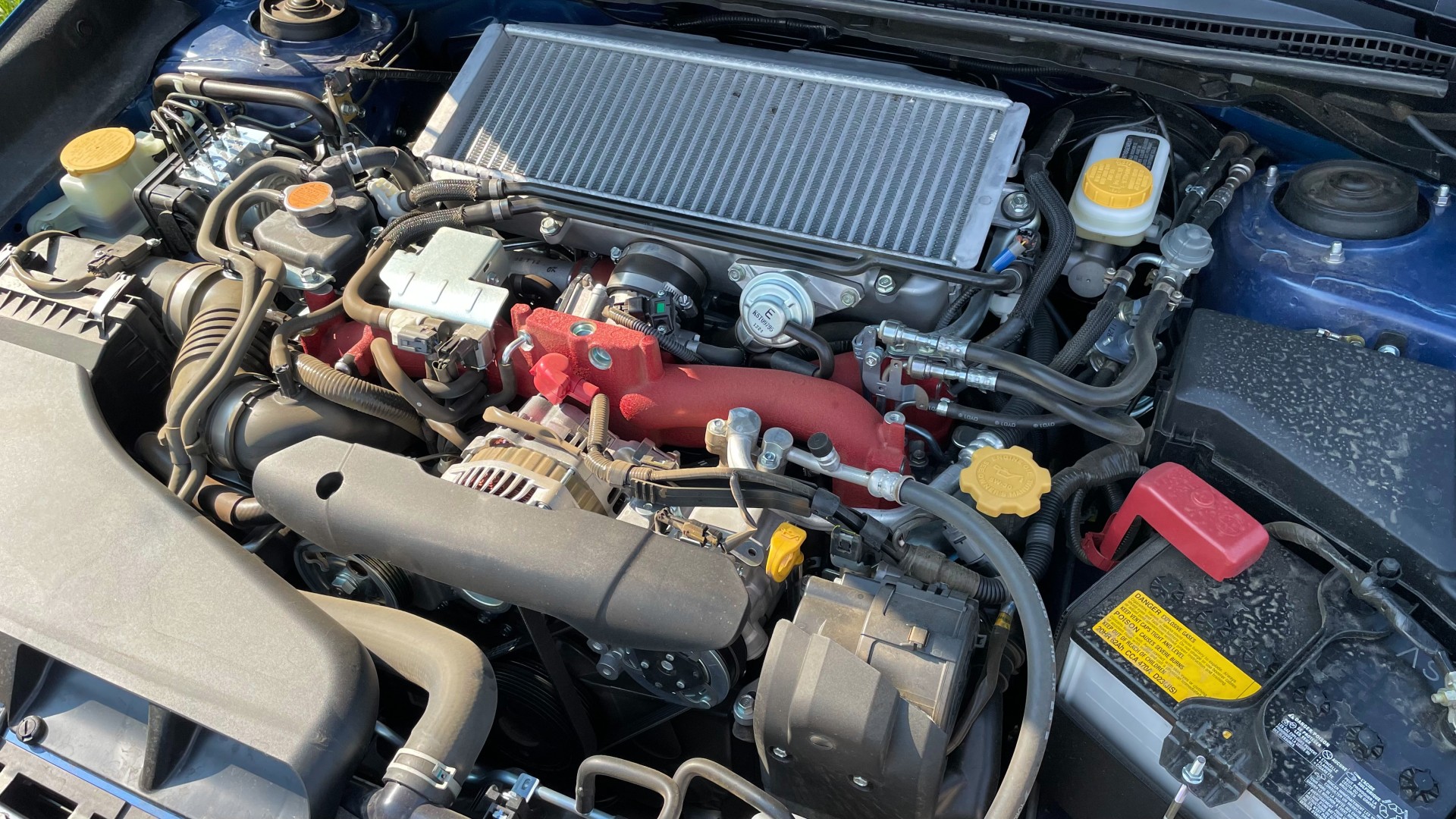 For the purposes of this review, Subaru Canada set me up in a Sport-tech with Wing Spoiler tester finished in World Rally Blue Pearl with a black Ultrasuede and red leather interior that carries a starting MSRP of $47,895.

I must say that getting into a bright blue car with a gigantic wing spoiler attached to the trunk serves as an excellent reminder of my long-gone youth. I am a good decade and a half beyond the target demo for the WRX STI, but I appreciate being reminded of my younger days all the same. 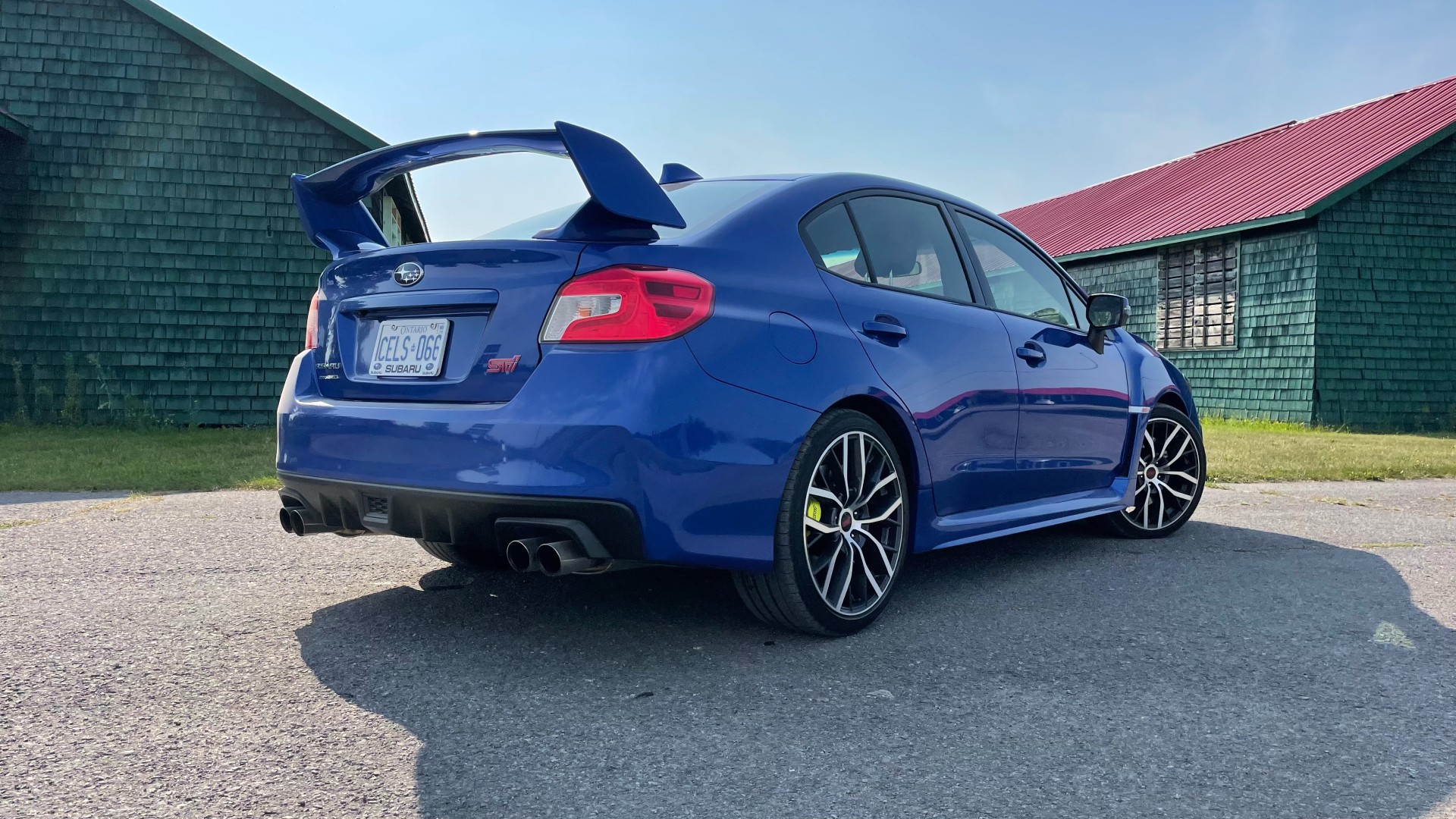 At any rate, I said in my WRX review that its boy racer styling isn’t for me, but I get why the car looks the way that it does. That feeling holds for the STI. I think the wing spoiler looks ridiculous, so I would opt for the lip spoiler were I considering the STI for myself, but I can appreciate that a lot of younger buyers prefer the former.

As for the rest of the STI’s exterior, such as its big hood scoop, neon yellow brake calipers and quad tip exhaust finishers, I think they fit the car’s rally-performance aesthetic well, even if they strike me as being a bit over the top. Target buyers dig these details, and so therefore they exist.

On the inside, the STI’s cabin delivers an engaging performance car experience. The black Ultrasuede and red leather trimmed Recaro seats strike a good balance between comfort and support, the centre stack and instrument cluster layouts are straightforward and easy to use, and the car’s boxy profile provides for good outward visibility and space for occupants. Fine styling details, such as the red-topped shift knob, red accent stitching in the steering wheel and on the seats, STI badging and customizable digital secondary screen, which can display an array of boost gauges, further establishes a strong performance car aesthetic. 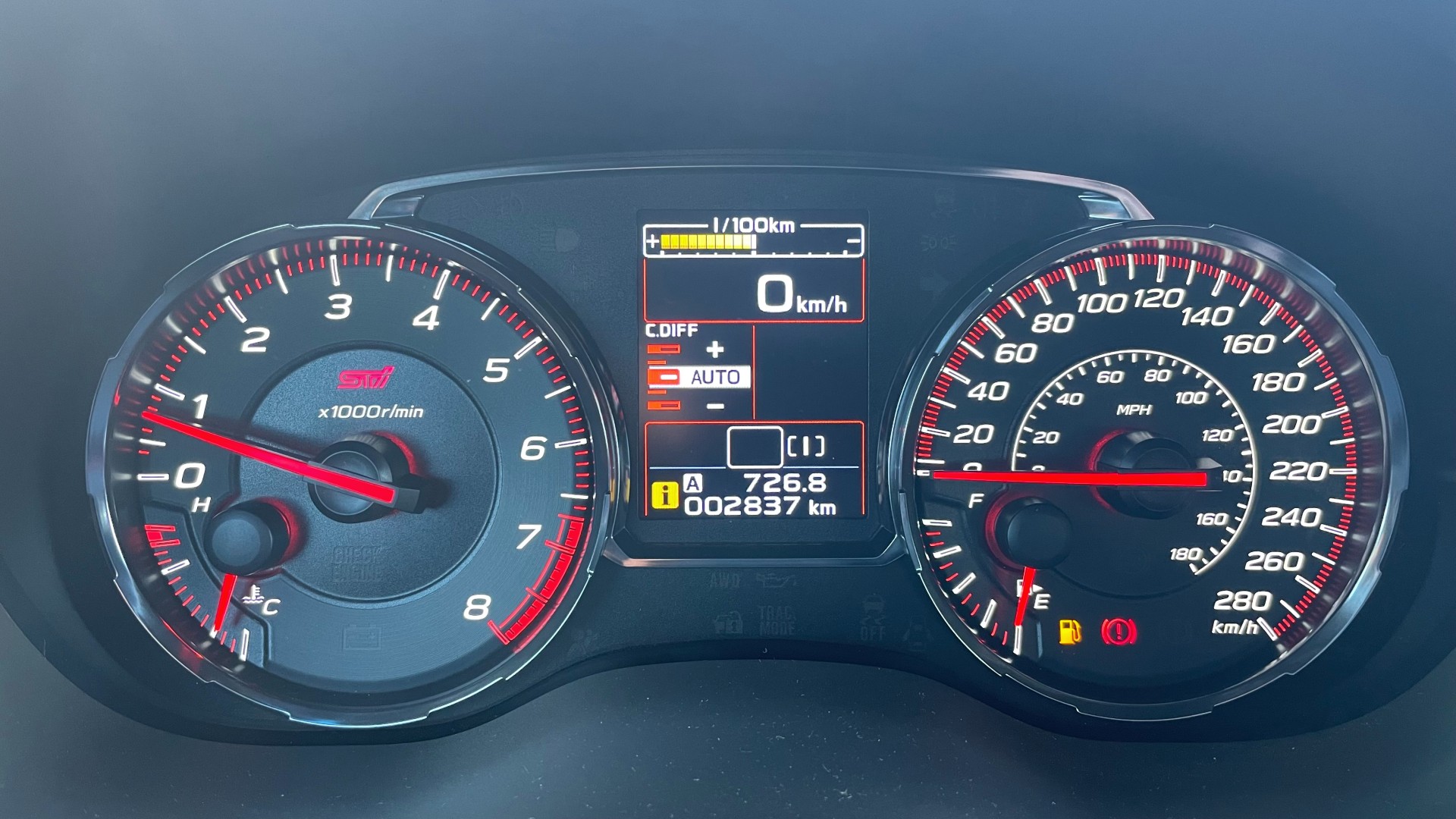 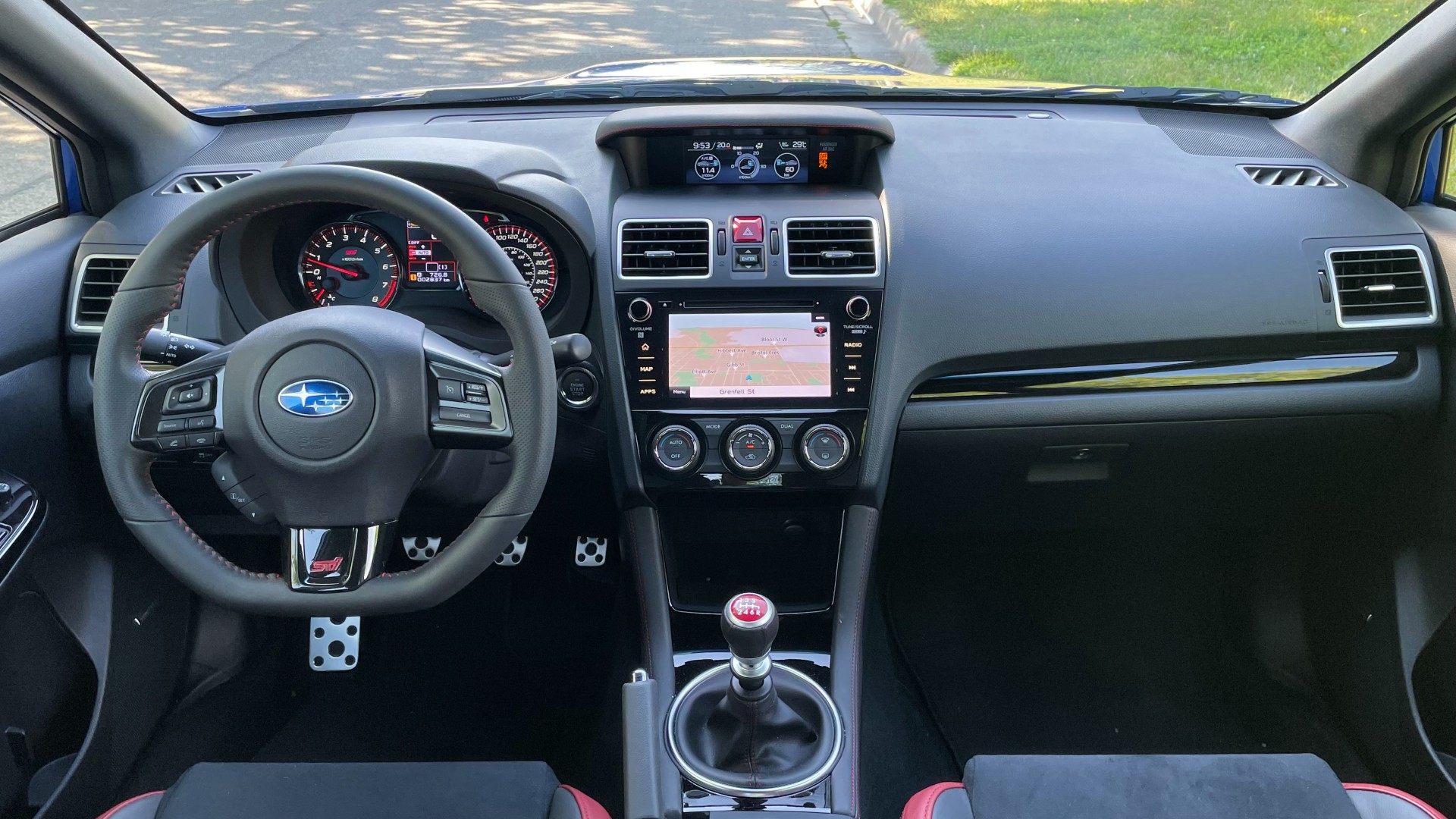 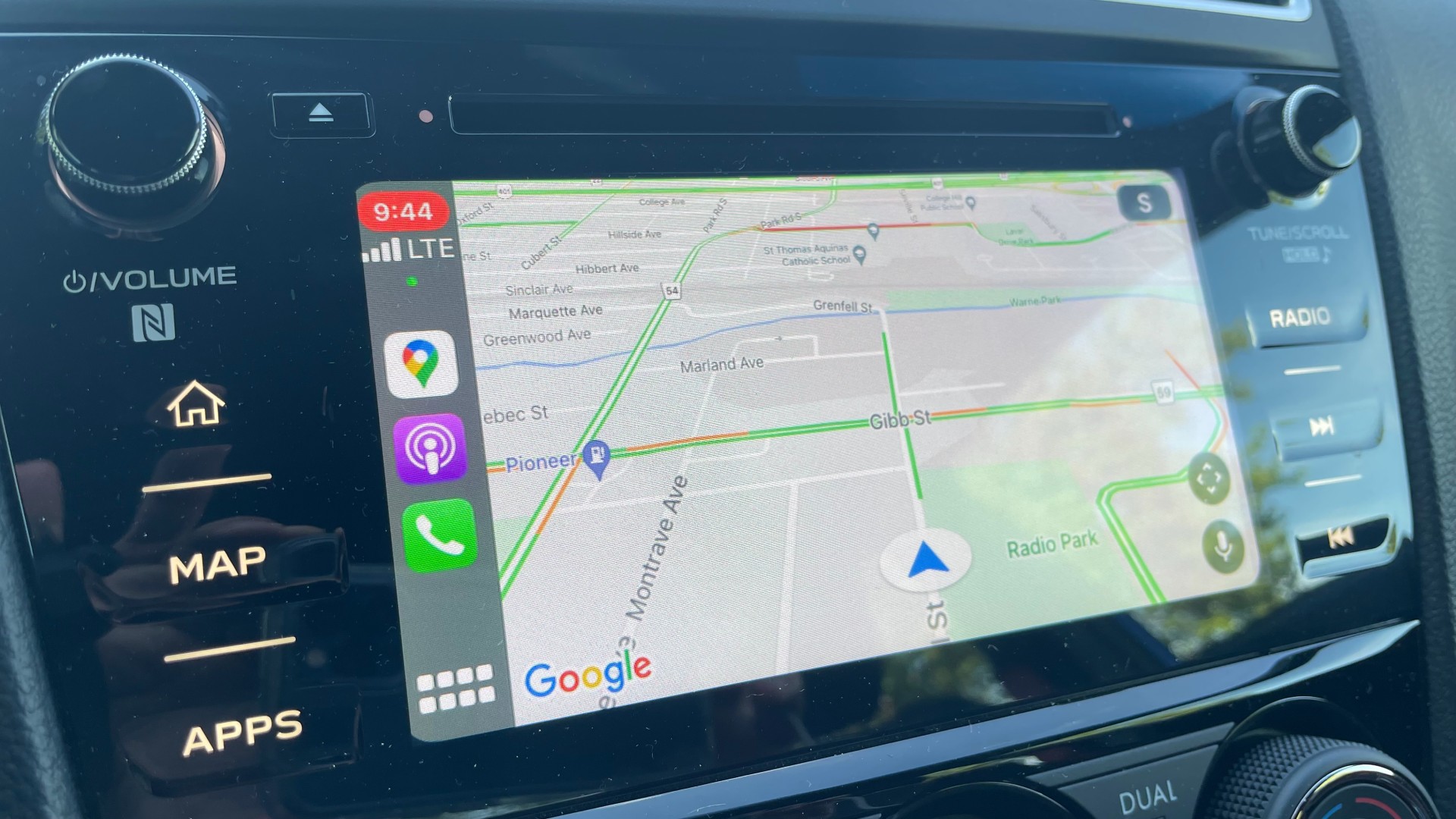 As for the drive, the STI drives like it looks – aggressive, loud, and quite fast.

The STI’s performance intentions are present right from start up when a gurgling sound from the starter button gives way to a thrumming baritone from the 2.5-litre turbo Boxer and its quad exhaust. And once first gear is engaged, the clutch is let out and throttle is applied, the STI eagerly launches forward with a fury that encourages the driver to wind up engine revs, bang through the first few gears and seek out twisty two-lane blacktop post haste.

During my week of driving, I drove on such roads near my home in Oshawa and in Prince Edward County in and around Picton, and I found the STI to be an excellent choice for undulating pavement. The clutch and shifter have a hand-in-glove relationship that allows for precise gear selection and throttle application, the steering provides good feedback and its suspension tuning, while quite firm, delivers handling that feels responsive and planted. The STI is very much in its element here. 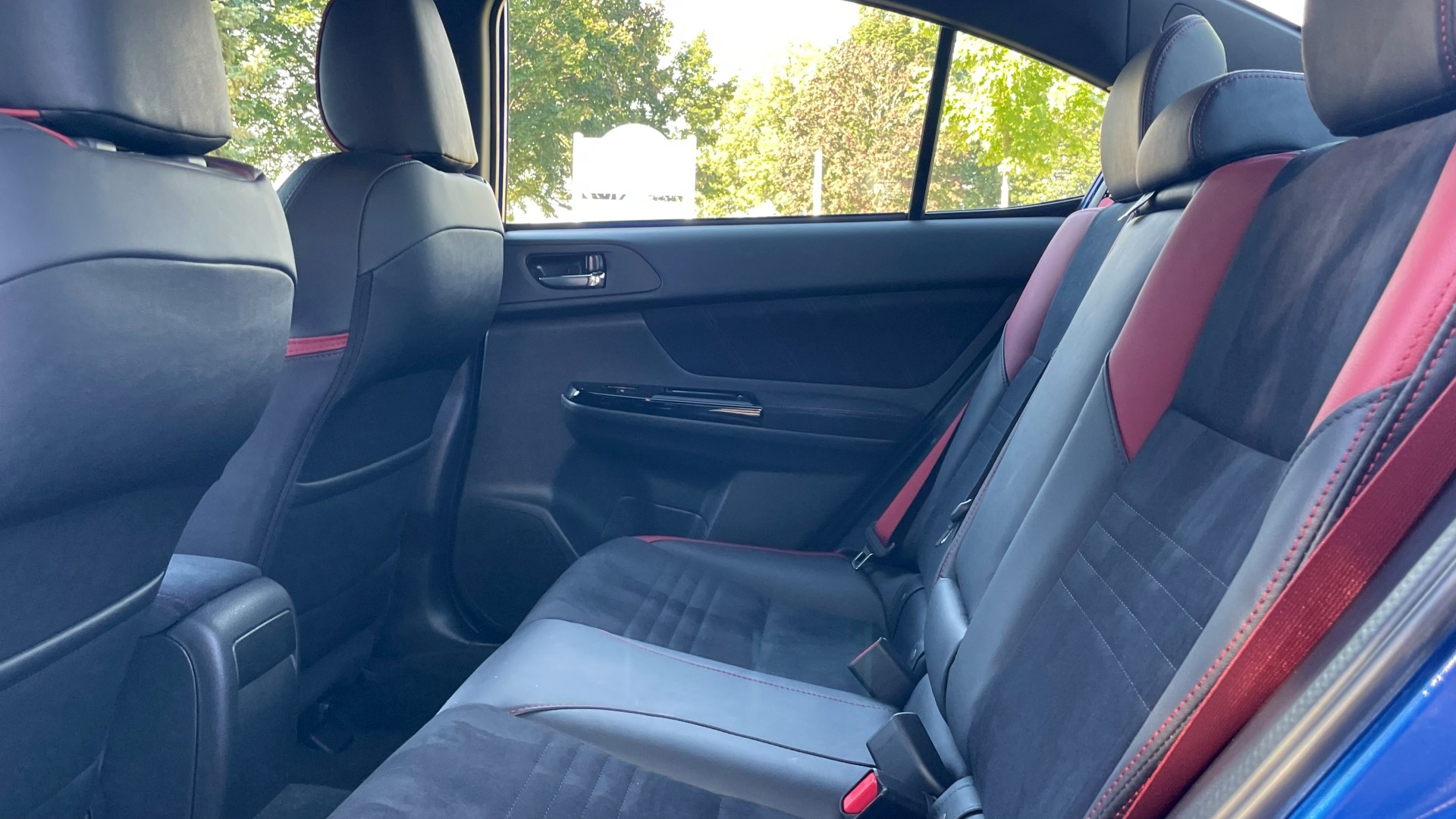 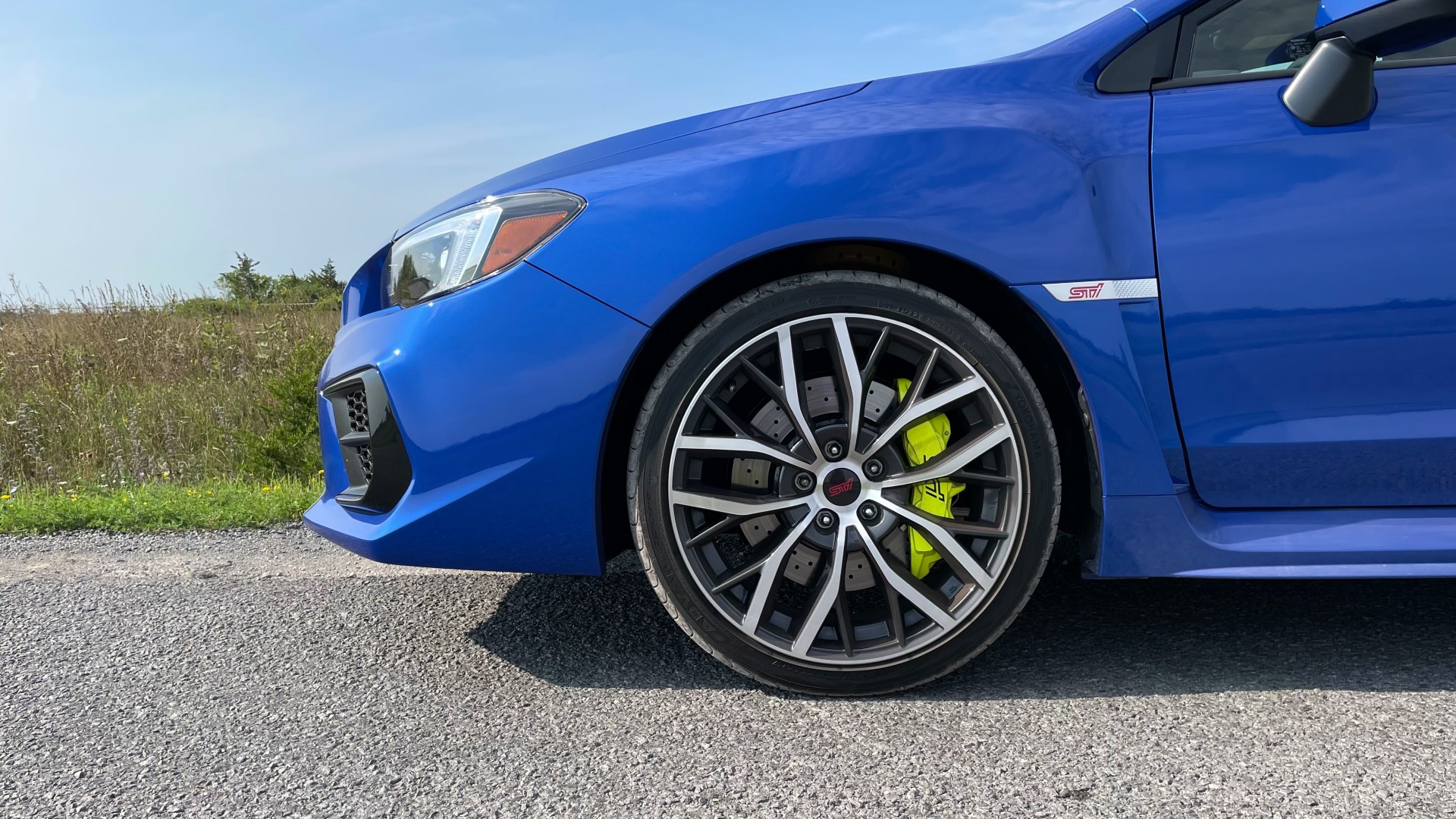 As for drawbacks, I think if you put your money down for an STI, you’re signing up for the items I’m about to mention. This means you are accepting of an intentionally loud exhaust drone (which is especially noticeable at highway speeds), suspension damping that might be a bit too firm, at times, for everyday driving, and attention-seeking exterior styling.

These things might give me pause, but on the plus side, the STI exists without pretense: it’s looks like a tightly wound, twitchy, rally-inspired sports sedan, and that is exactly what it is. You know what you’re in for as soon as you lay eyes on it, which is something that cannot be said for all cars.

Subaru has set a high bar with the current STI, a standard that its forthcoming replacement will have a difficult time surpassing, not only in terms of specification, but also within the hearts and minds of owners and enthusiasts alike.