Join the Conversation (0)
When the Terrafugia “flying car” debuted at the 2012 New York Auto Show, my partner, an aerospace engineer who tinkers with race cars in his spare time, declared it  “a terrible car and even worse aircraft”. And so it goes with compromises.

In the past, “sports utility” vehicles have been anything but. Genuine usefulness usually came at the expense of performance – and vice versa. But as crossovers nudge out sedans and wagons to take over the marketplace, they’ve also gotten better, with competition fierce and customers less willing to compromise.

The Porsche Macan is the benchmark for small performance crossovers. While you’re probably not going to mistake the driving performance for that of a 911– you definitely know you’re driving a Porsche. In keeping with Porsche’s positioning strategy, the GTS sits just below the Turbo Macan. And like the rest of the GTS badged vehicles, it strikes the perfect balance between power and handling.

The Macan debuted in 2014, with the GTS model arriving two years later. In blazing Carmine Red paint ($3,560) our tester is a head turner. Although the design has only been mildly refreshed since its debut, it’s still one of the best looking in its segment. Eschewing typical crossover “boxiness” in favour of a teardrop-sleek outline, the Macan’s style is a cohesive adaptation of Porsche’s 911 design language onto a compact crossover. 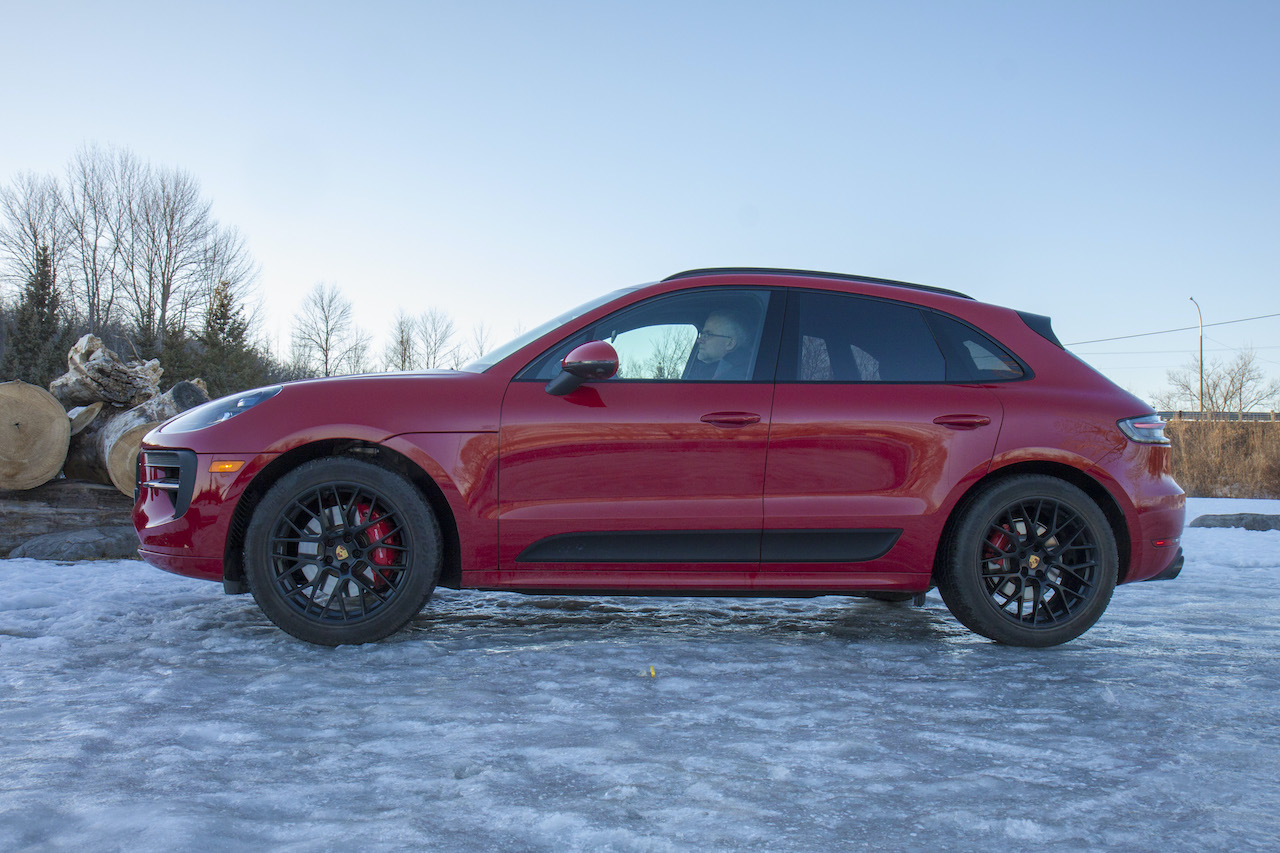 The cockpit is bisected by a bank of switchgear that’s familiar to any aficionado, but presents a bewildering array of buttons to any newcomer to the Porsche fold.  Other premium models in Porsche’s lineup, such as the Taycan and Panamera, have upgraded to a sleek haptic touchpad.

It’s a comfortable, attractive environment, but falls behind the Audi Q5 and Mercedes GLC in terms of luxuriousness and charges a hefty premium for features we’ve come to expect as standard in this segment. 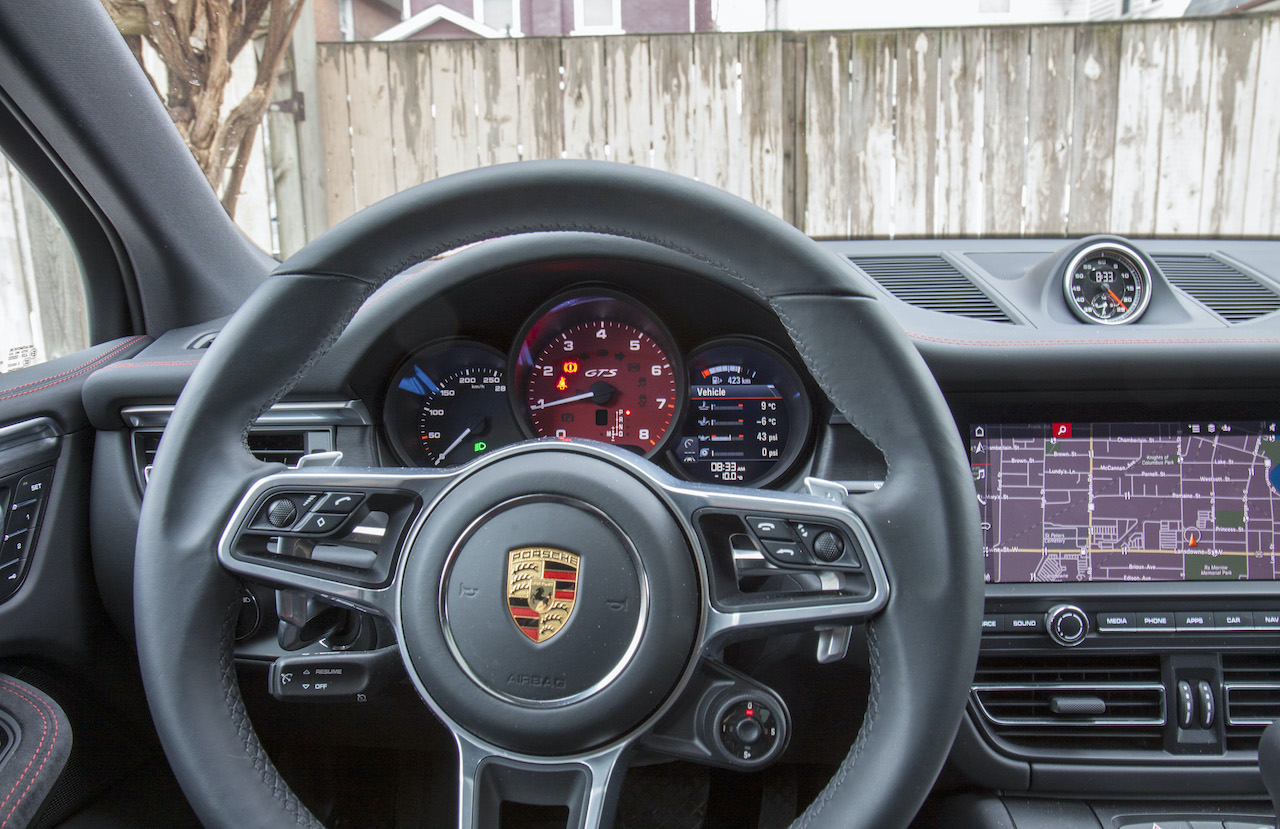 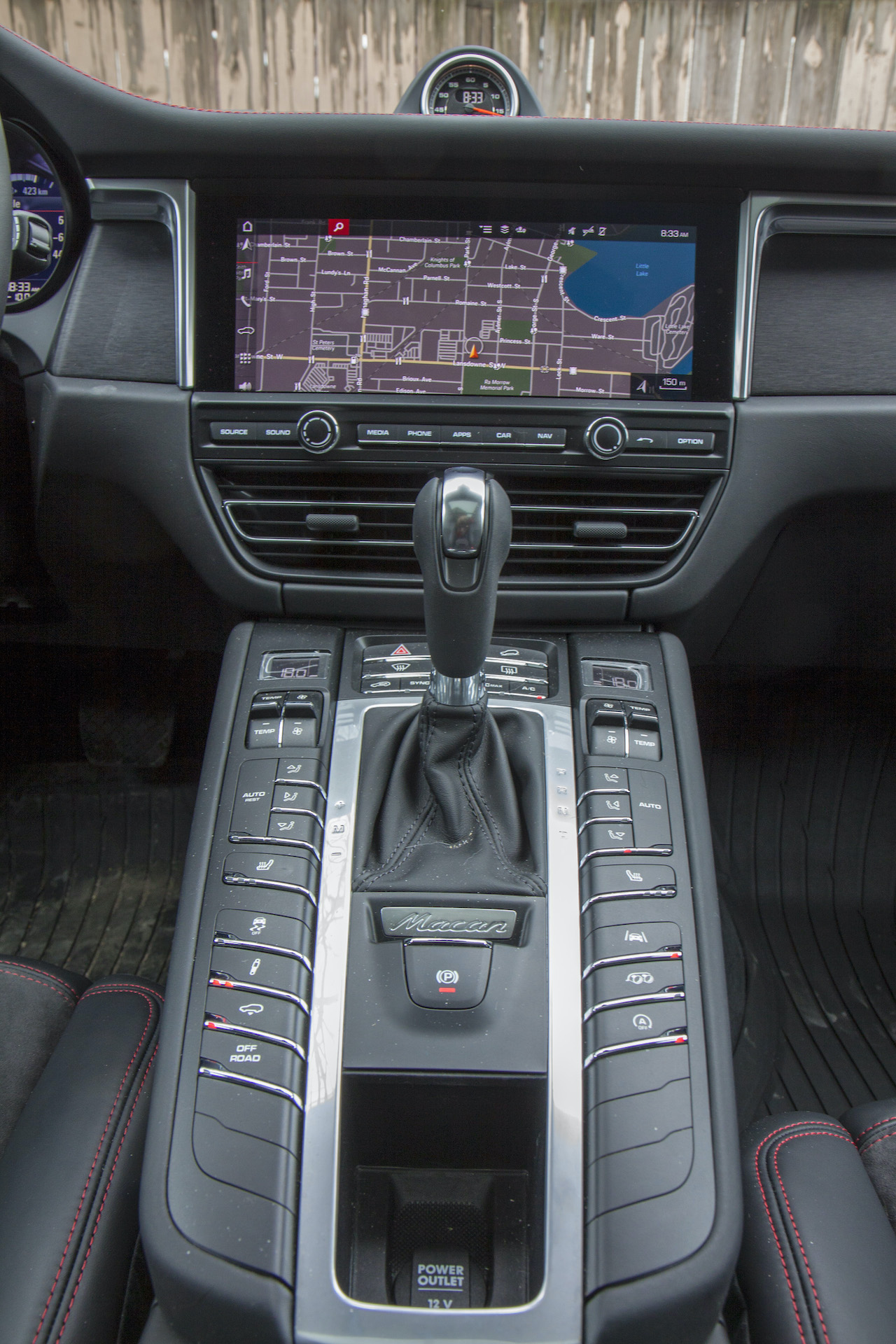 Rear seats are somewhat cramped, but drop them flat and the total cargo space increases to 1,498 litres. Although some competitors offer more space, the Macan’s ride height can be raised for more clearance, or lowered to facilitate cargo loading.

Behind the wheel, you could easily forget you’re driving a crossover. The Macan GTS handles like a sports car, yet also doubles as a relaxed daily driver. It owes its excellent driving dynamics to a standard adaptive air suspension, Porsche Active Suspension Management dampers (PASM), and a brake-based torque vectoring plus system ($1,700).

A steering wheel located dial lets you toggle between Normal, Sport, and Sport Plus modes, which alter the throttle and transmission responses accordingly. Choose Sport or Sport Plus, and the air suspension drops the car by 10 mm for better stability at speed. In Sports Mode, the Macan GTS tightens up noticeably, with the ride becoming taut but not harsh. Steering, which does a respectable job of emulating a solid hydraulic based system, increases in heft and sharpness, and the PDK transmission executes crisp downshifts answered with reciprocating barks from the quad tailpipes. Dial it up a notch to Sport Plus, and those responses become more frenetic, the exhaust booming and wailing in accompaniment.  The tight chassis keeps the car flat and the torque vectoring system allows it to take fast corners with the agility of a coupe.

The adjustable seat bolsters can be dialed up so that you’re held in a firm grip instead of sliding around the seat, which really helps driver confidence and effectiveness. 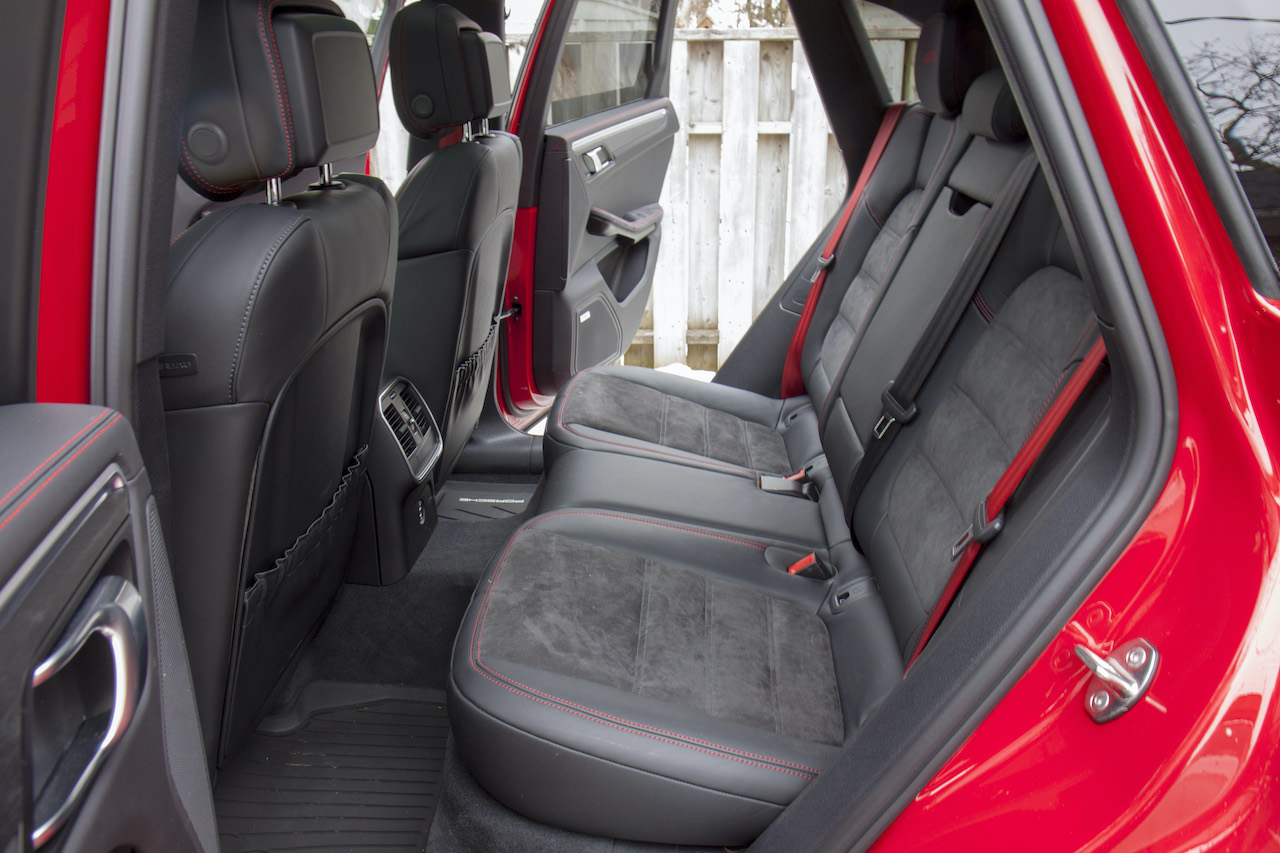 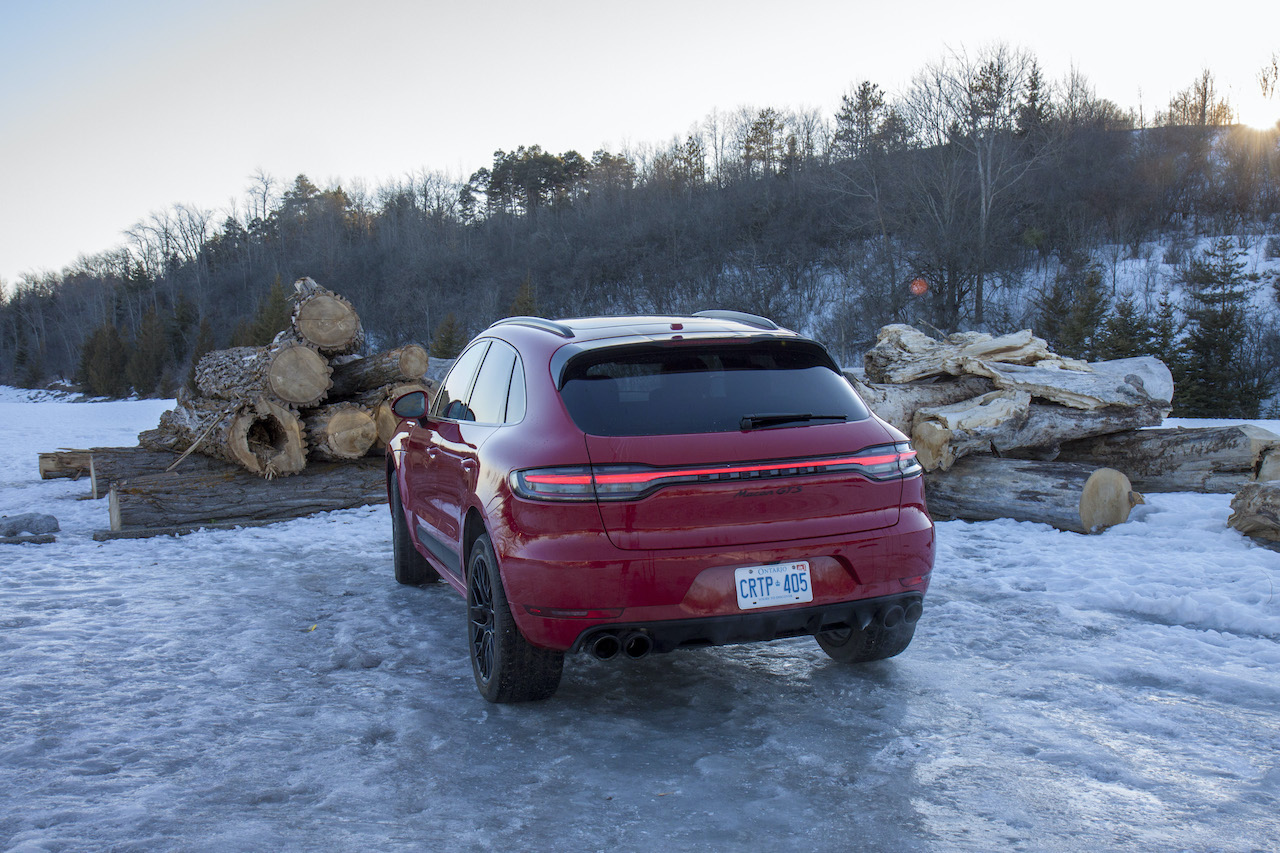 It’s a blast to drive. But all that fun comes at a premium – over a week of mixed driving, I averaged 11.1 litres/100 km including a lot of highway travel. The Macan GTS is also quite a bit more expensive than competitors Mercedes AMG GLC43, BMW X3M40i, or Audi SQ5 – all of which offer more standard luxury equipment. But when it comes to handling dynamics and performance, the Porsche Macan GTS is hands down the best driver’s car.  For the driving enthusiast who’s looking for a bit of utility with their next sports vehicle, the Porsche Macan GTS is a pretty good compromise.