Has the manual transmission made the SR into a Civic Si rival?

Join the Conversation (0)
The Nissan Sentra underwent a big change for 2020, getting all-new styling both inside and out as well as some new tech inside. Even though compact sedans are always losing market share – especially in North America – it’s a popular model for Nissan and one they will always want to get right.

For the most part, they did. The new car handled well, it looked the part and interior room was good. It wasn’t the most powerful model in the segment, but the bigger issue for reviewers – myself included – was the lack of a manual at the sportiest SR level. To their credit, Nissan has listened and so for 2021, you can get a stick shift on SR cars.

In addition to that, heated front seats and mirrors have been added to base S trim, as has a 7-inch touchscreen with Apple CarPlay and Android Auto. The SR, meanwhile, gets a new Electric Blue with black roof colour option as well as the black 18-inch alloys seen here on my tester.

Also seen on my tester, the colour Gun Metallic. While it is not the new Electric Blue, it’s a pretty good fit with what’s going on colour-wise in the car world these days, from mid-size sedans to pickup trucks. It is a $485 option, so you’ll want to keep that in mind.

Otherwise, the Sentra is a very good-looking car. It is low and wide thanks in no small part to a wide application of Nissan’s “V-Motion” grille and a roofline that provides almost a “chopped” look to the proceedings. It’s very much a junior-Altima and that’s a good thing, as the Altima is a segment leader in the style-department, and now, so is the Sentra. The black wheels would look a little better shod with different rubber as the winter boots on my tester are a chunky affair, but overall, it’s a good look. 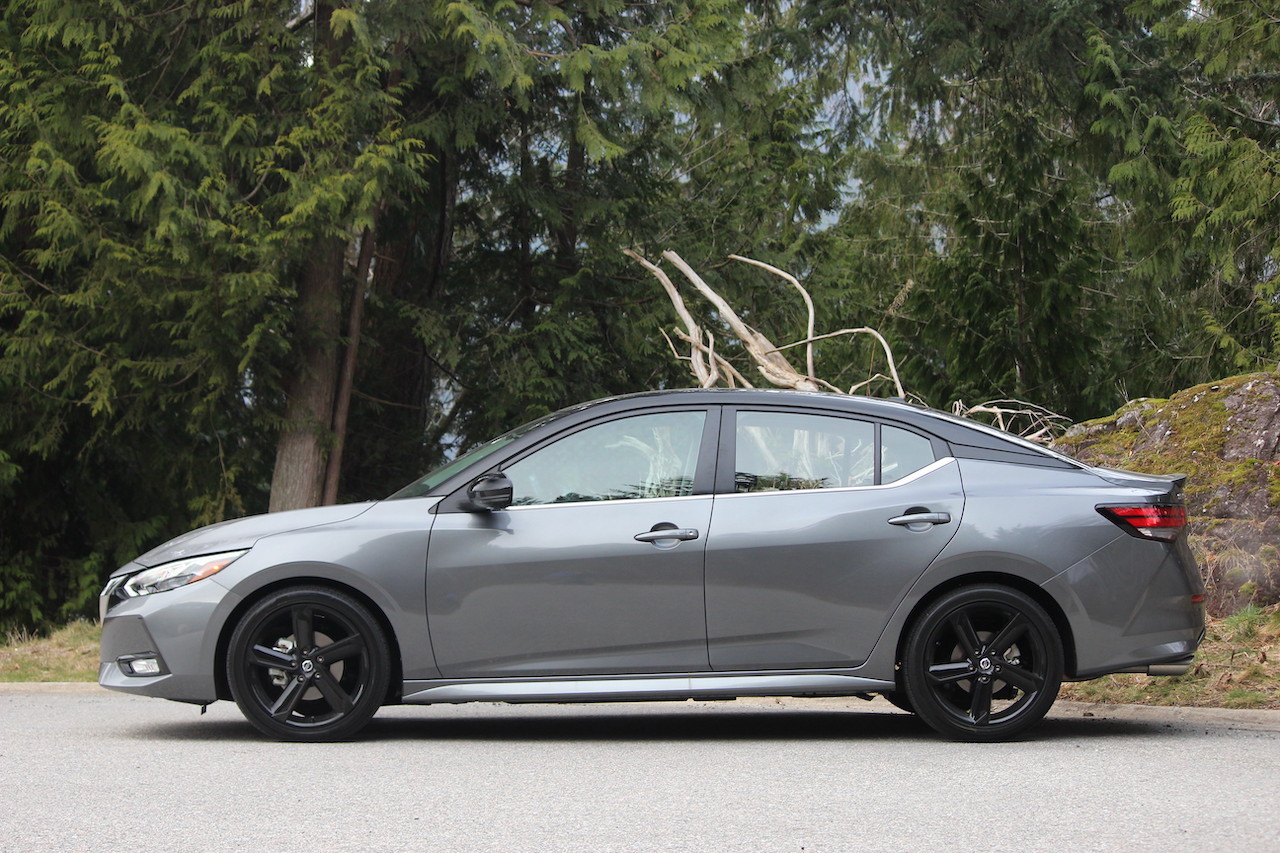 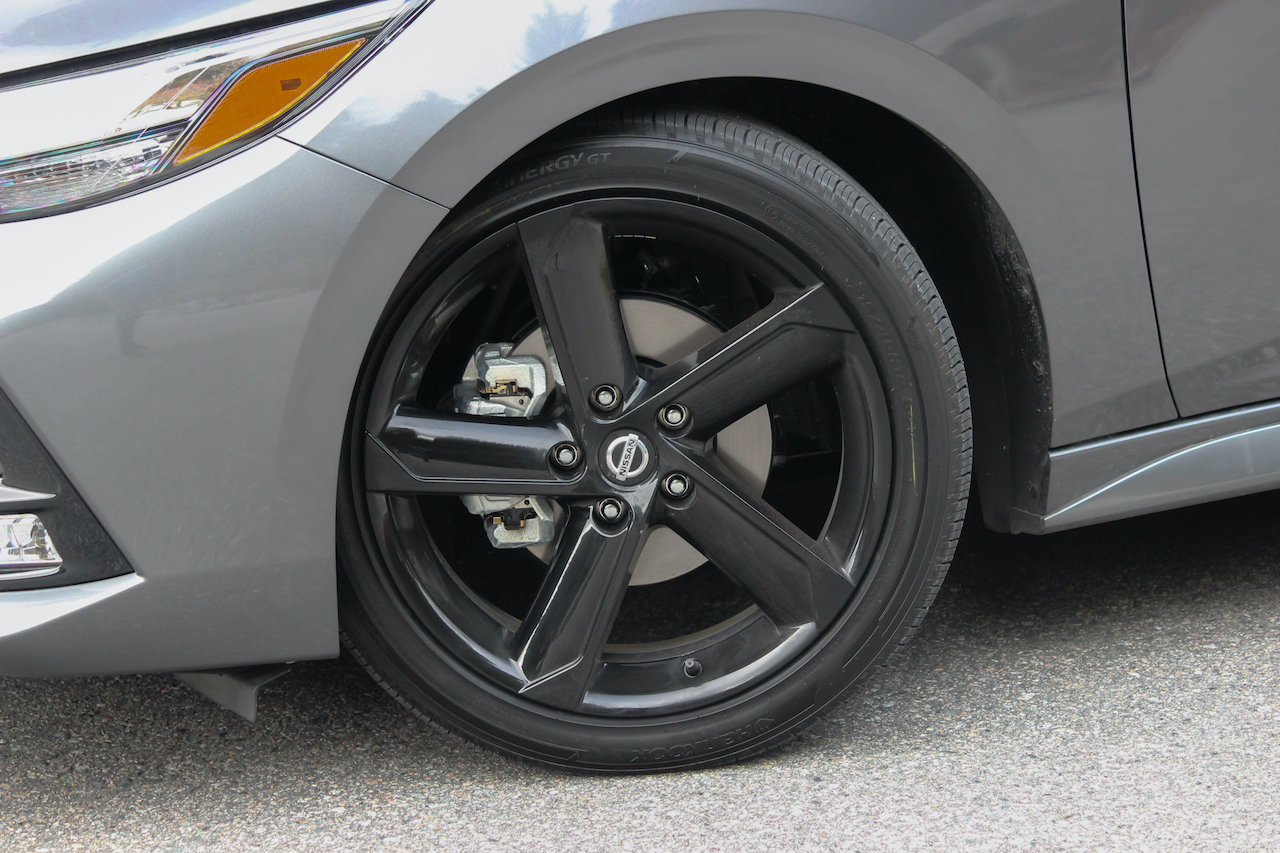 The interior styling does well, a mix-and-match that combines the playful with the serious. On the one hand, you have the dark dash panels, the dark grey seats; and on the other, there’s the contrasting orange stitching, chunky flat-bottom steering wheel and vent roundels that are said to be inspired by the items you see on the GT-R sports car.

The central infotainment display, meanwhile, is a good size, but unfortunately, the graphics are tame, it’s a little slow on the uptake and it’s just a little bland overall.

Space-wise, there’s a good amount both up front and in the back, though I couldn’t help but feel that the fabric seats this car had felt a little less supportive than the synthetic leather items I sampled when I tested this car in 2020. That doesn’t make much sense as they are the same seats otherwise (and not of the supportive Zero Gravity variety seen on other Nissans), but I couldn’t shake the feeling throughout my drive. The steering wheel angle is also a little too tilted away for my liking.

Power from the 2.0-litre is rated at 149 horsepower and 146 lb-ft of torque – the same as last year – and it’s your only engine choice for the Sentra. That makes the buying process simple for sure, but you have to think that there’s room for something with just a little more oomph, especially on this SR version. The competition from the likes of the Toyota Corolla, Honda Civic and Mazda3 all offer multiple engine choices (including an new turbo engine choice for the Mazda) so you have to think that may pose a bit of a challenge for the Nissan.

Clutch take-up is a little longer than you might expect, but so is throttle travel so while it takes a little getting used to, eventually the action becomes more natural. 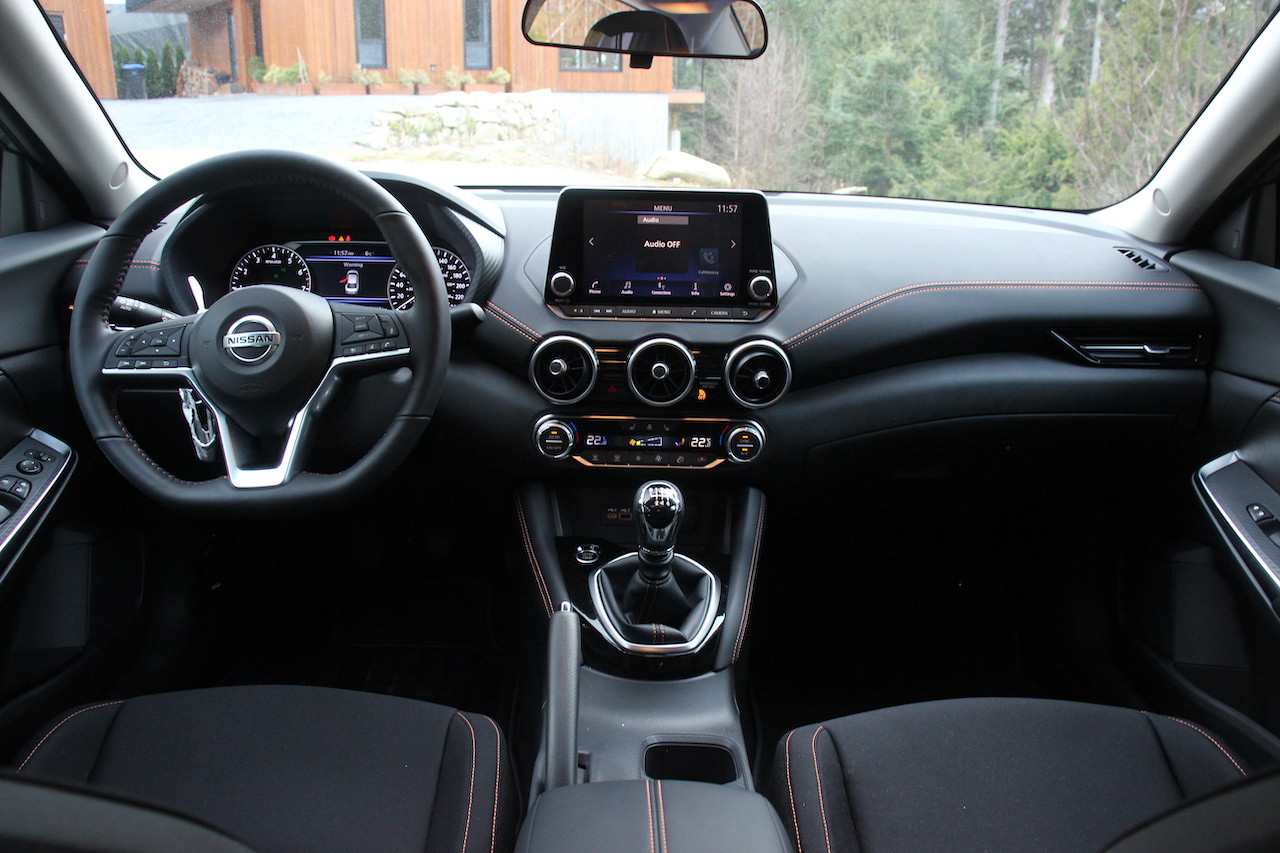 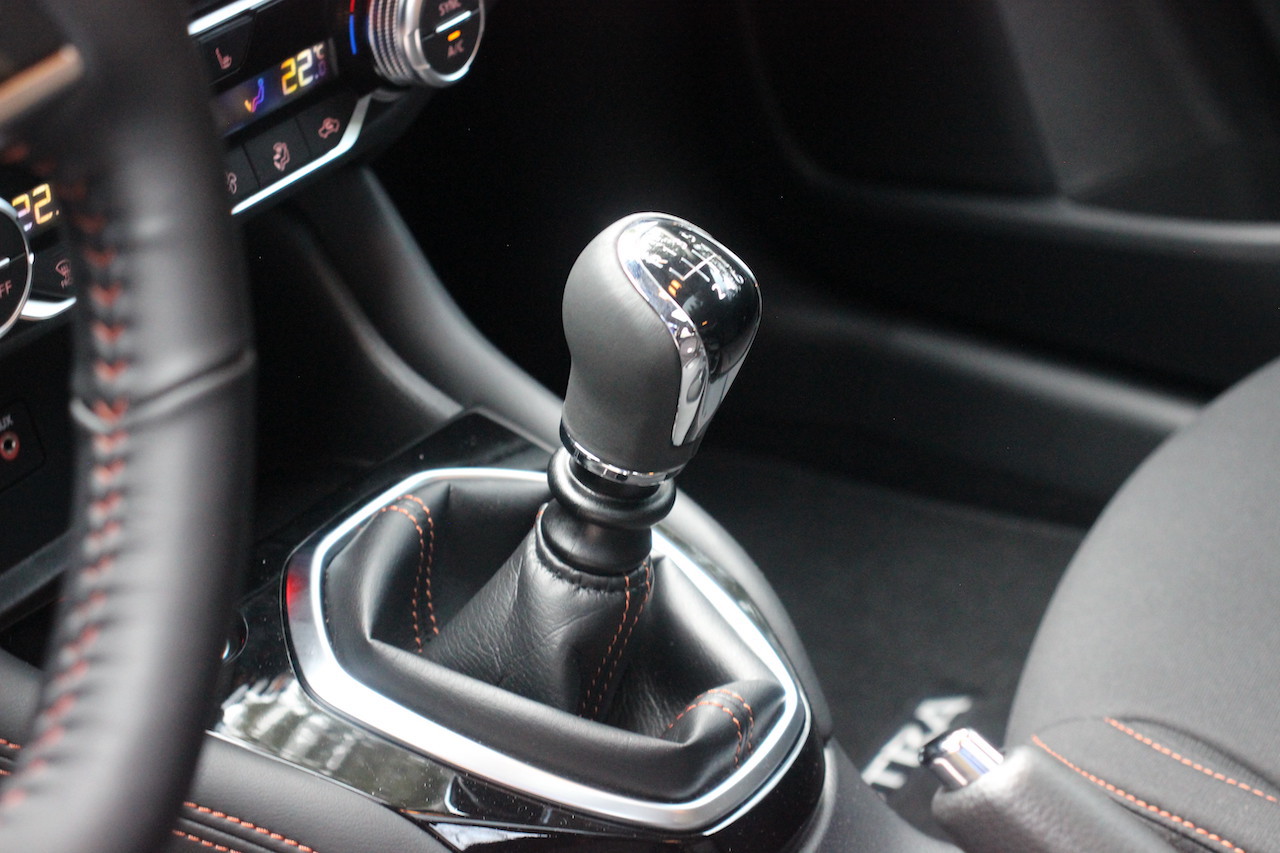 There’s very little that can be done, though – that I was able to do, anyway – to cast aside the fact that the shift lever action needs work. The throw length is OK, but the gates themselves need to be better defined and the overall feeling is rubbery. Putting aside the 370Z sports car for a minute, the last time I drove a Nissan with a stick was back when the Versa Note hatchback was still a thing and the feeling of that gearlever action comes rushing back here. It wasn’t great then, and it’s not great now.

The ratios themselves, however, work well for me. I’ve heard some of my colleagues say that they found them to be too tight, but I never found that here, cruising happily along on the highway comfortably in fourth gear at a lowly 2,500 RPM with a fuel economy figure of just over 6L/100 km.

That thick-rimmed steering wheel isn’t just for show, either. It is your gateway to a steering rack that responds nicely to driver inputs and helps make for a spirited drive. The handling is good but the ride is perhaps even better, offering much better bump absorption and body control than you’d think from a compact like this. It rides like a much bigger, higher-spec car and that’s a good thing,

What about that much-ballyhooed manual, though? Has it made the SR into a Civic Si rival? Not really. Of course, Honda has had years to fettle the Si – and it’s a much pricier vehicle -- so maybe the comparison isn’t entirely just. At the end of the day, though, the addition of the manual seems just a little half-baked when it comes to adding a little something extra to the SR. A little more shift feel would have been great, a little less pedal travel but above all that, a little more power so you really get a more complete transformation. It’s a nice option to have, just not sure how many SR buyers are actually going to go for it.