Join the Conversation (0)
With all the focus on the Mazda3’s new turbo engine it can be easy to forget how good the regular car is.

The less-powerful Mazda3 shouldn’t be thought of as the lesser car, it’s driving experience will still put a smile on your face, and that’s what matters.

Base cars come with a 2.0-litre 4-cylinder good for 155 hp, while the car I tested was a top-level GT equipped with the bigger Skyactiv-G 2.5-litre 4-cylinder producing 186 hp and 186 lb-ft of torque. Linked to a responsive 6-speed automatic, the powertrain is refined, efficient, and sounds much better than the turbo version.

You can also add all-wheel drive for $3,700, which seems like a lot but it comes bundled with the premium package that brings with it rear smart brake support, a 360-degree camera, parking sensors, a head-up display, traffic jam assistance and more. A list of features that reads more like something you’d find on the sales brochure of an Audi, not an entry-level Mazda.

All-wheel drive isn’t available on the Honda Civic, Toyota Corolla, or even the new Hyundai Elantra and that gives the Mazda a definite advantage over all of them.

Mazda’s AWD system is a sophisticated affair using an array of sensors that monitor everything from steering effort, to the windshield wipers, and even how the car’s weight balance shifts during the course of your drive.  It makes it possible to apply a precise of amount of torque exactly where it’s needed and can even decouple the rear wheels when you don’t need AWD.  On snowy roads, the car felt sure-footed and confident, with the system basically fading into the background and I was never once worried about losing control. 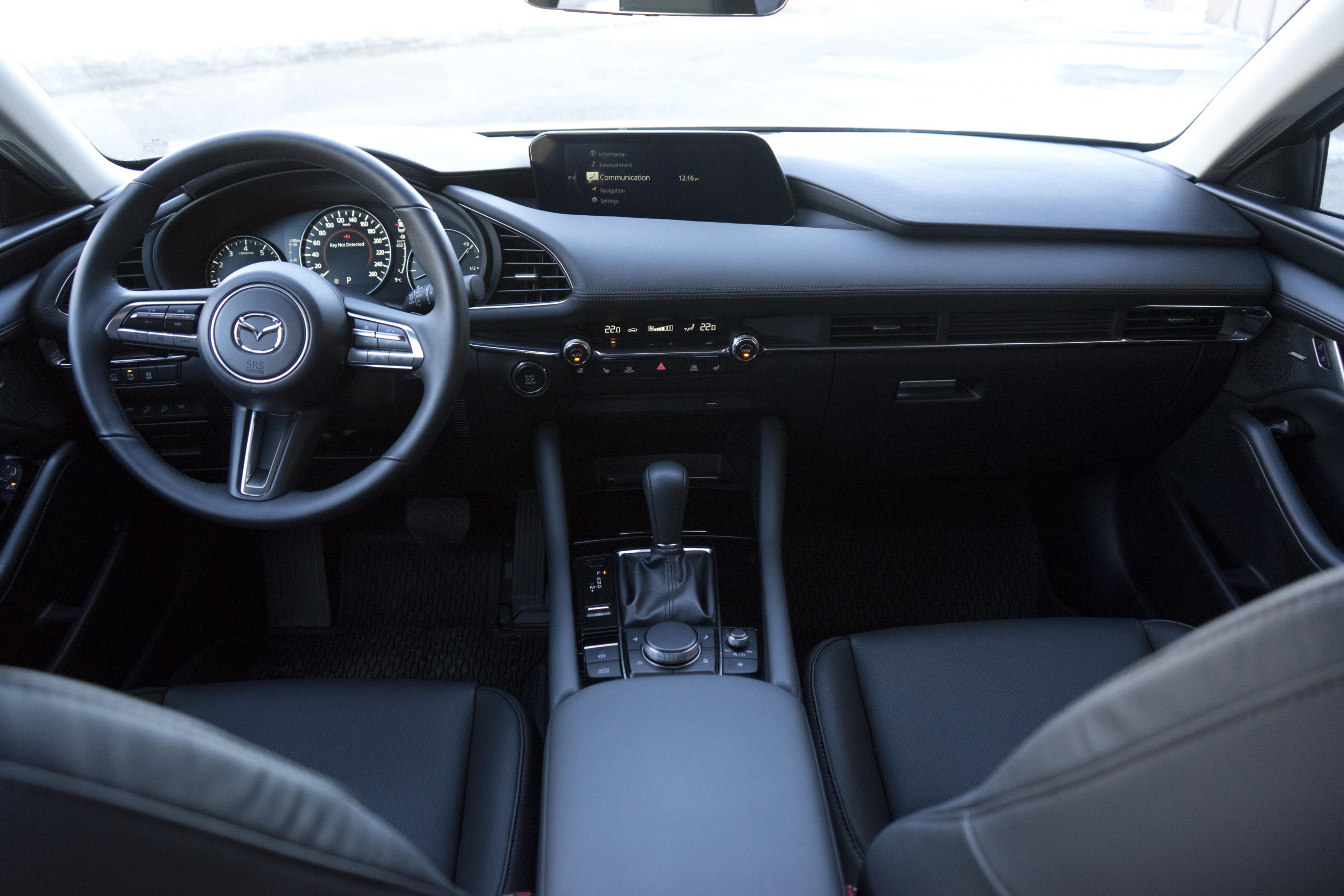 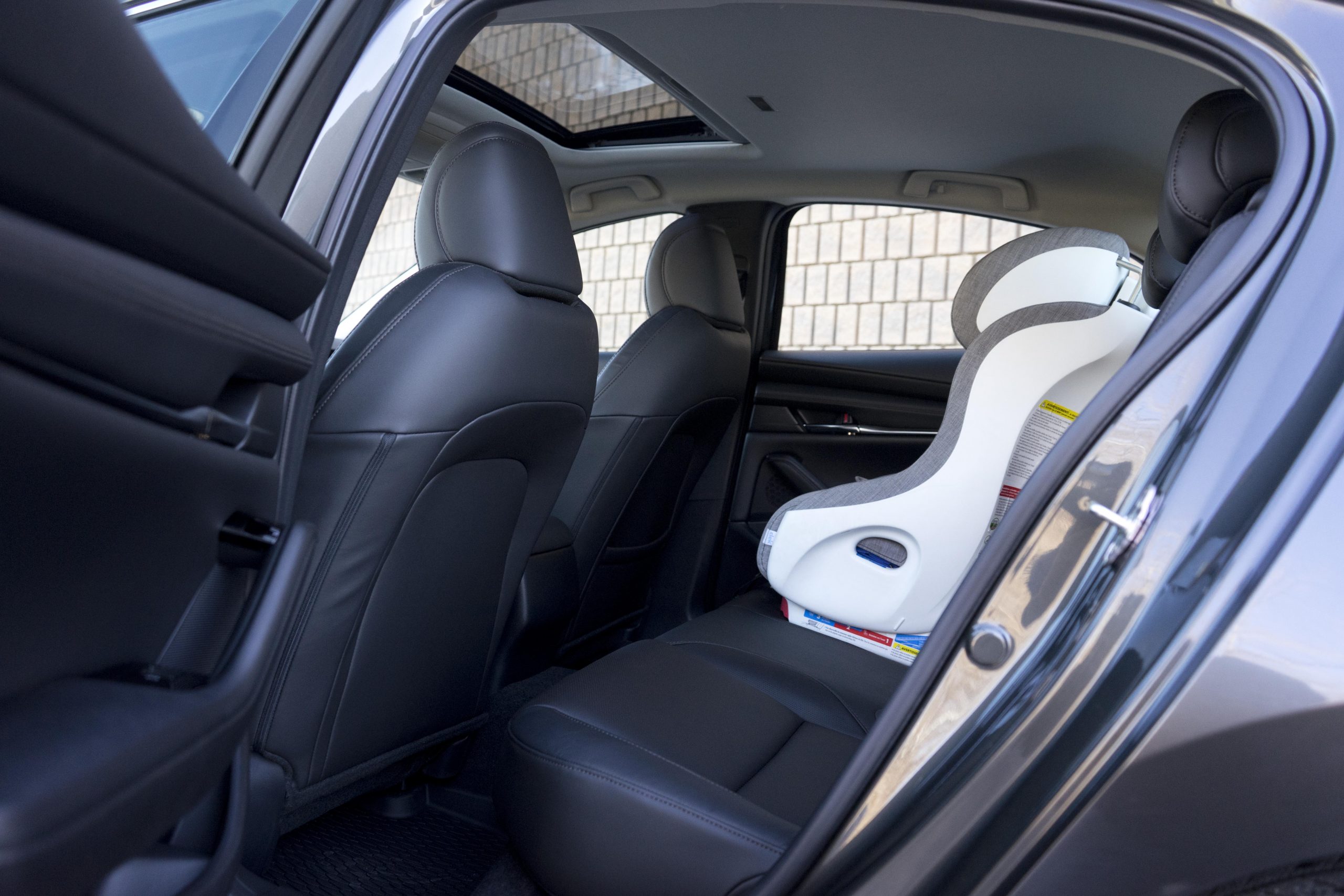 The Mazda3 has become so good that it’s easy to see why they’re comparing themselves to the premium brands. It starts on the inside, and I’ve sat in quite a few of these already and I come away impressed every time.  It’s not just the high-quality materials; it’s the layout and the feel of the buttons and dials. It’s the driving position and the thought that went into the design and how it all works together.  You get in and you naturally know where everything is.  It’s an interior space that will take most minutes, not days, to acclimate to.

The infotainment system can be a sore point for some, and I get that. It’s businesslike and straightforward (read boring) and while it might lack the bells and whistles you find in other brands, the rotary controller is less distracting than a touch screen and the system is pretty snappy with quick screen transitions and short loading times. Like everything else about the car, it also fades away into the background so you can just get on with driving.

And that’s where the Mazda3 really shines. Show it a winding road and it all comes together. All the sensors, controls, and electronics work as one. Even the seats help the driver feel more connected to the road. The steering isn’t twitchy or overly fast; it’s precise and linear. On-centre there’s very little play in the wheel and you get that direct, rock solid feel you typically find on cars costing twice as much. Step on the brake pedal and it’s the same thing, linear and natural.

The ride is superbly controlled but errs on the firmer side of things, which I like, but you might not. The perky driving dynamics aren’t for everyone, but that also happens to be one of the reasons shoppers look towards the premium European brands when looking to upgrade their ride.

For a small, or growing family the Mazda3 might be just enough but small back seats mean that leg and headroom is at a premium if you’re anything over six-feet tall. And with two back there, you’ll be knocking elbows frequently. The trunk is also on the smaller side and is dwarfed by what a Honda Civic offers. The Honda also has a much roomier rear seating area, so you do give up some usability with the Mazda.

All that is moot if you don’t carry passengers on a regular basis and because a Mazda3 isn’t another jacked up crossover, it’s also fuel-efficient. Rated at just 8.2L/100 km combined, you can expect even lower numbers under the right conditions. 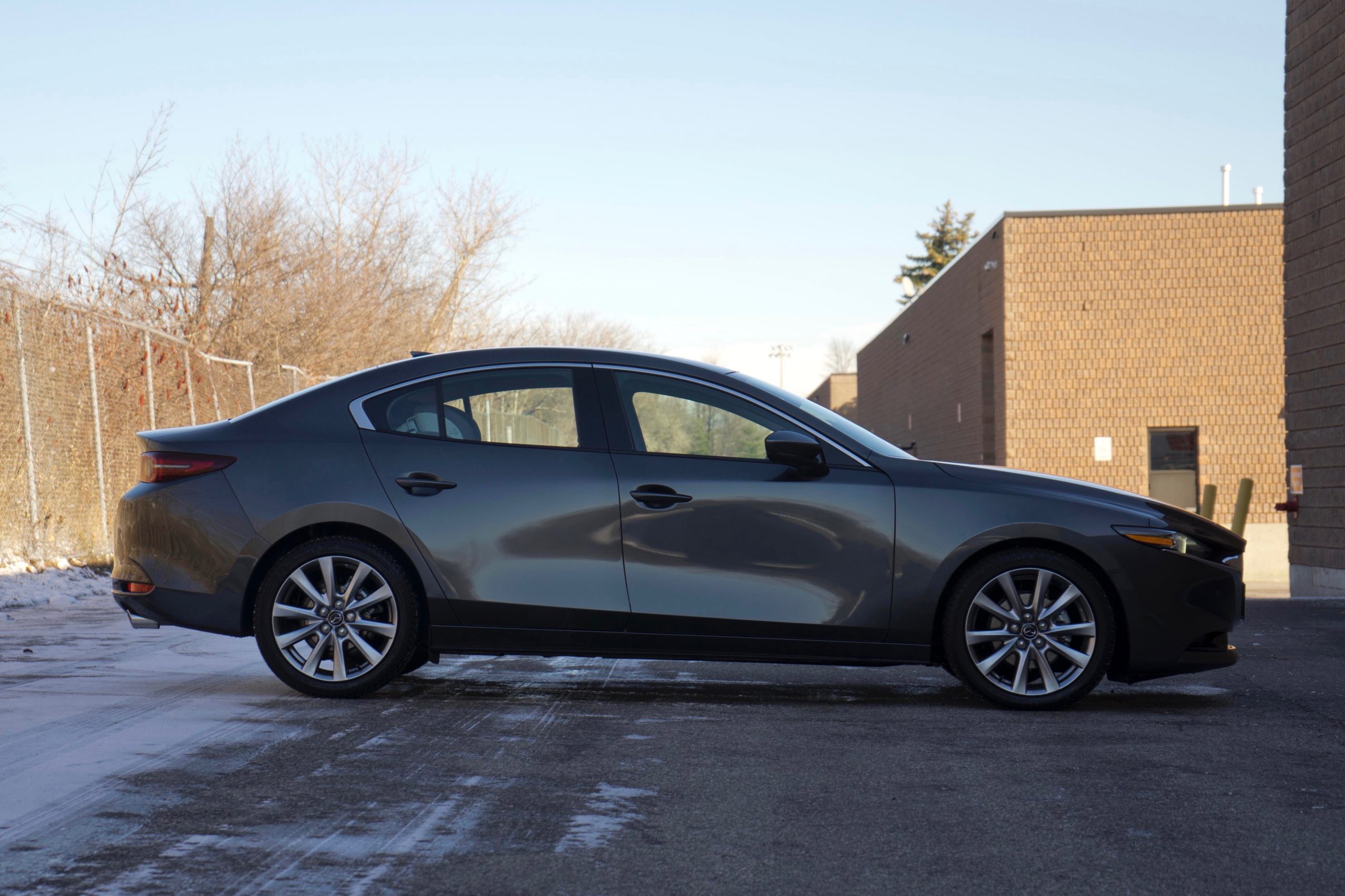 What’s even better is that you can still get a Mazda3 sedan with a manual transmission, however, you can’t get it with all-wheel drive, and you’ll have to step down a trim level to the GS.

Although I thoroughly enjoyed the extra power from the turbo engine when I drove it, I never once felt that the non-turbo car was lacking in any way.  This is one of the best compact sedans you can buy today and the choice of engine doesn’t change that.