Join the Conversation (0)
You'd be forgiven if, at first look, you couldn't tell which Lincoln model you were looking at in the photo at the top of this page. The brand's current lineup, made up entirely of crossovers and SUVs, offers the same look in sizes small (Corsair) through XL (Navigator). Don't look at that as a negative, though. They might all wear the same look, but it didn't hurt Audi when that company built four versions of the same sedan, and Lincoln has picked a wonderful shape to put in the enlarger.

This is the second attempt from Lincoln to create a luxury midsize crossover. The first, which was on sale for just three years, was little distinguished from the Explorer with which it shared a platform. More than 10 years on, Lincoln is still starting with Explorer bones, but it's only the engineering team and someone spending hours scouring through the list of parts that will notice the similarities between the two three-row models. Lincoln has made this one different everywhere that counts, down to the Detroit Symphony Orchestra providing bespoke warning tones. 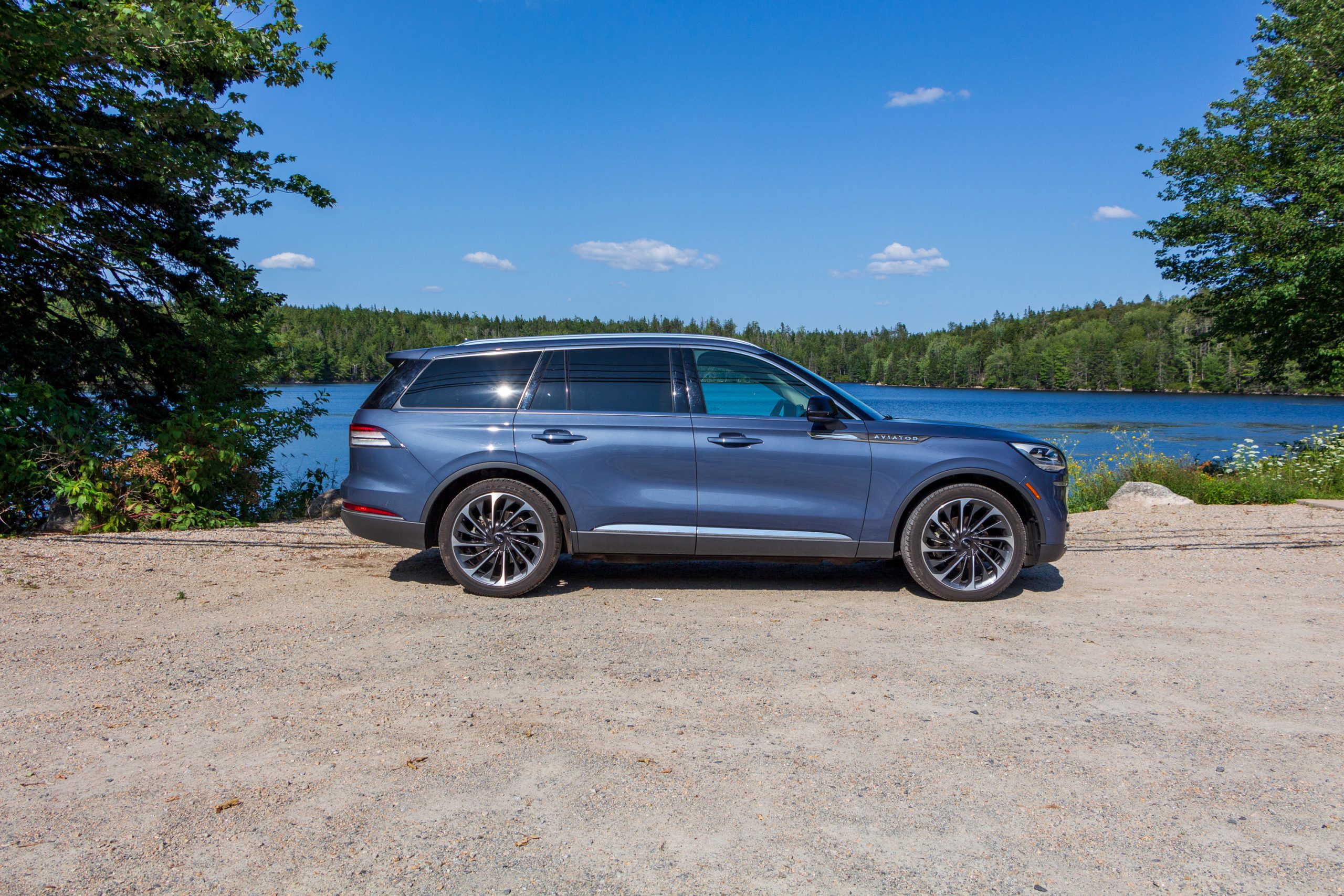 As we said on the top, this is a handsome SUV. It has a real presence both in a parking lot and on the road, which it needs because Cadillac's XT6 offers some pretty serious swagger as well. It's where Lincoln really moves the game forward compared with its import competitors because none can pose like this. All of the Lincoln SUVs wear a similar face, this is the best version of it.

The swagger carries on into the cabin starting with the power seat adjustment switches on the doors letting you make adjustments before stepping in. Take your time getting used to those adjustments, there are nearly three dozen of them on this Aviator with the Luxury package.

Driver and front passenger get 30-way Perfect Position seats with power thigh extensions (separate adjustment for each leg) and massage. They'll adjust in ways you've never imagined. Heat and ventilation are standard across the board, with non-lux getting 12-way seats. 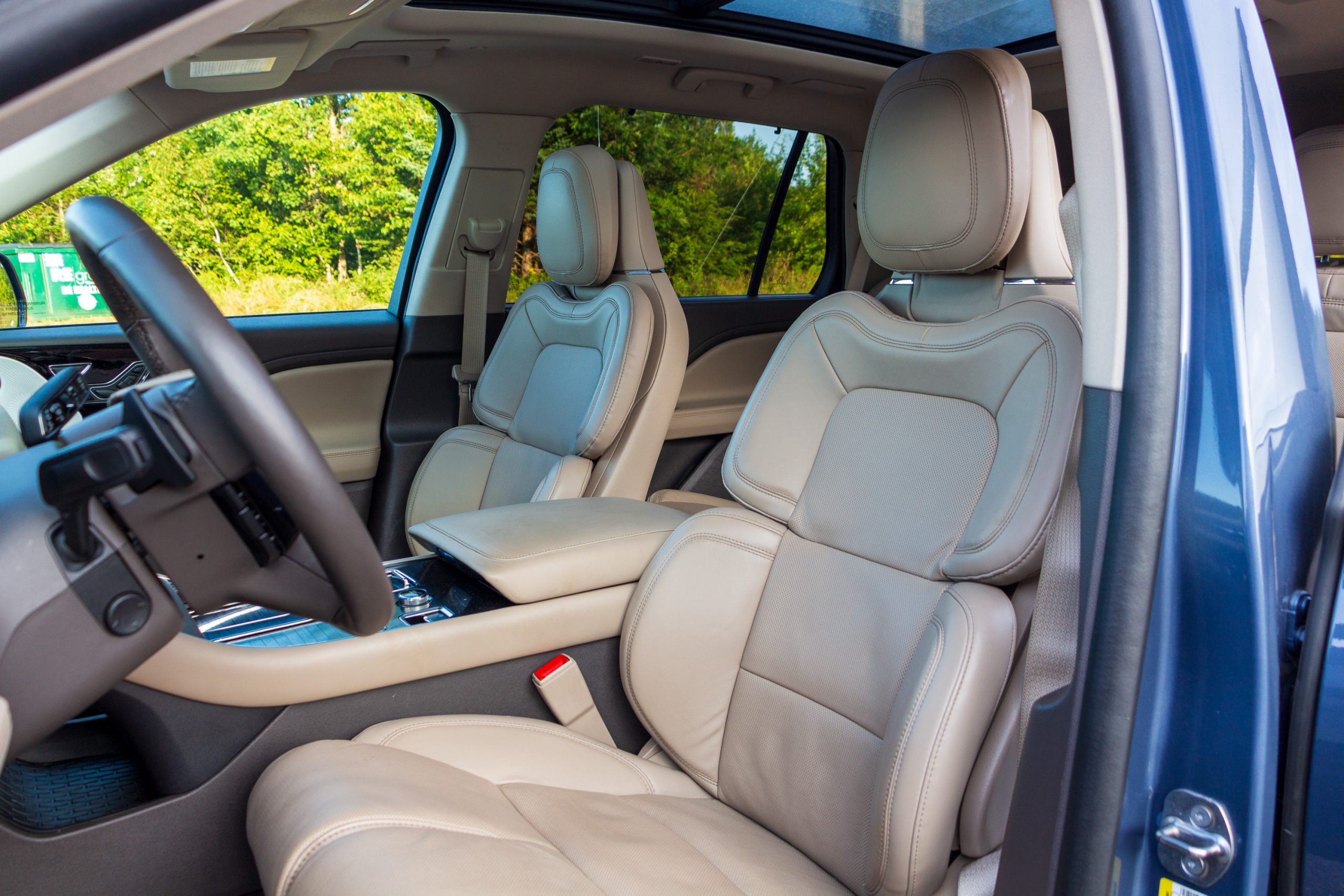 Three interior colour packages are offered, this Sandstone combination is the highlight with light and dark leather surfaces as well as open-pore wood trim throughout. Contrast stitching brightens the cabin even more, while the metal grilles of the 28-speaker Revel audio system look as good as you'll find anywhere. While not normally a luxury staple, the cabin is full of storage spaces, most with lids, giving you plenty of places to put nearly anything. Clever Lincoln logo textures inside these cubbies is also a nice touch.

Continuing the fanciness, the middle seats are heated and ventilated, the steering wheel is heated, and the third row will power-fold into the floor, but these are things you can find on a Hyundai these days. It is Lincoln's material choices and the cohesiveness of the design that make this feel special.

The Aviator needs to feel special, you see, because it is up against some serious hardware for both a bit more and a bit less money, depending on how much you value that special feeling and the worth you put on a badge. Take a look, both inside and out, and it certainly is special. 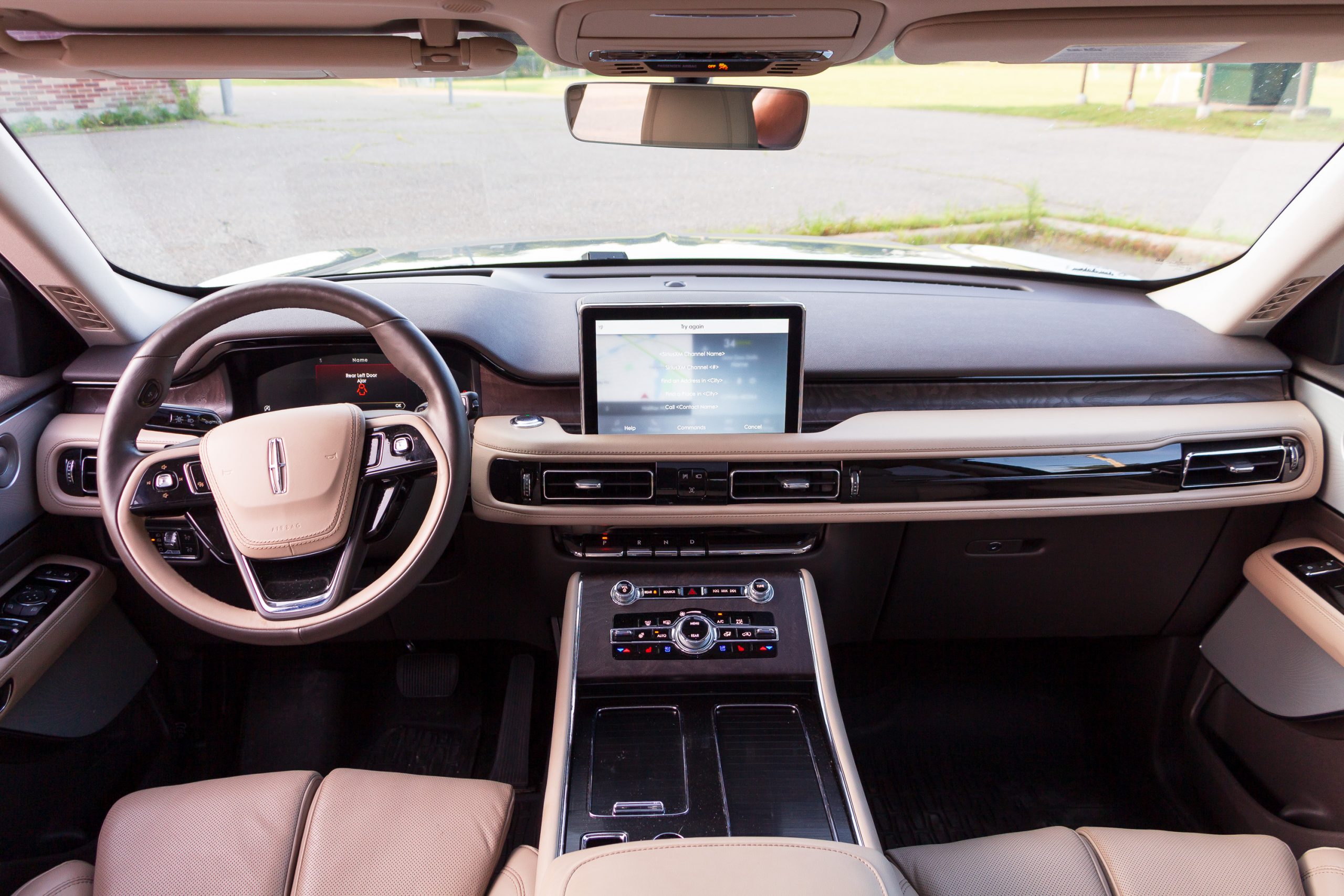 Turn up the Revel audio system for all its worth and it is one of the best in the industry. I didn't hear a single interior noise when turning the bass all the way up, a rarity at any price point. The digital dash, with distraction-minimising Calm Screen is just another touch that makes this Lincoln feel pampering.

Under the hood is a 3.0-litre twin-turbo V6 making 400 hp and 415 lb-ft, linked to a 10-speed auto with all-wheel drive across the board. Adaptive suspension raises and lowers the Aviator for access and loading, while the dampers tweak themselves to absorb what the road has to offer. Lincoln has even made buying one simple, with only one trim level for Canada and one major option pack adding the seats, head-up display, phone as key, and the top-shelf stereo. It also has adaptive cruise, surround-view cameras, and a parking assistant feature.

Execution is where the Aviator has fallen behind. Despite the many seat adjustments, neither myself nor my usual passenger (with the two of us at opposite ends of the size spectrum) could find a setting that was comfortable. The seating position is also quite high, making it tougher for the tall to find space and for the short to gain access. 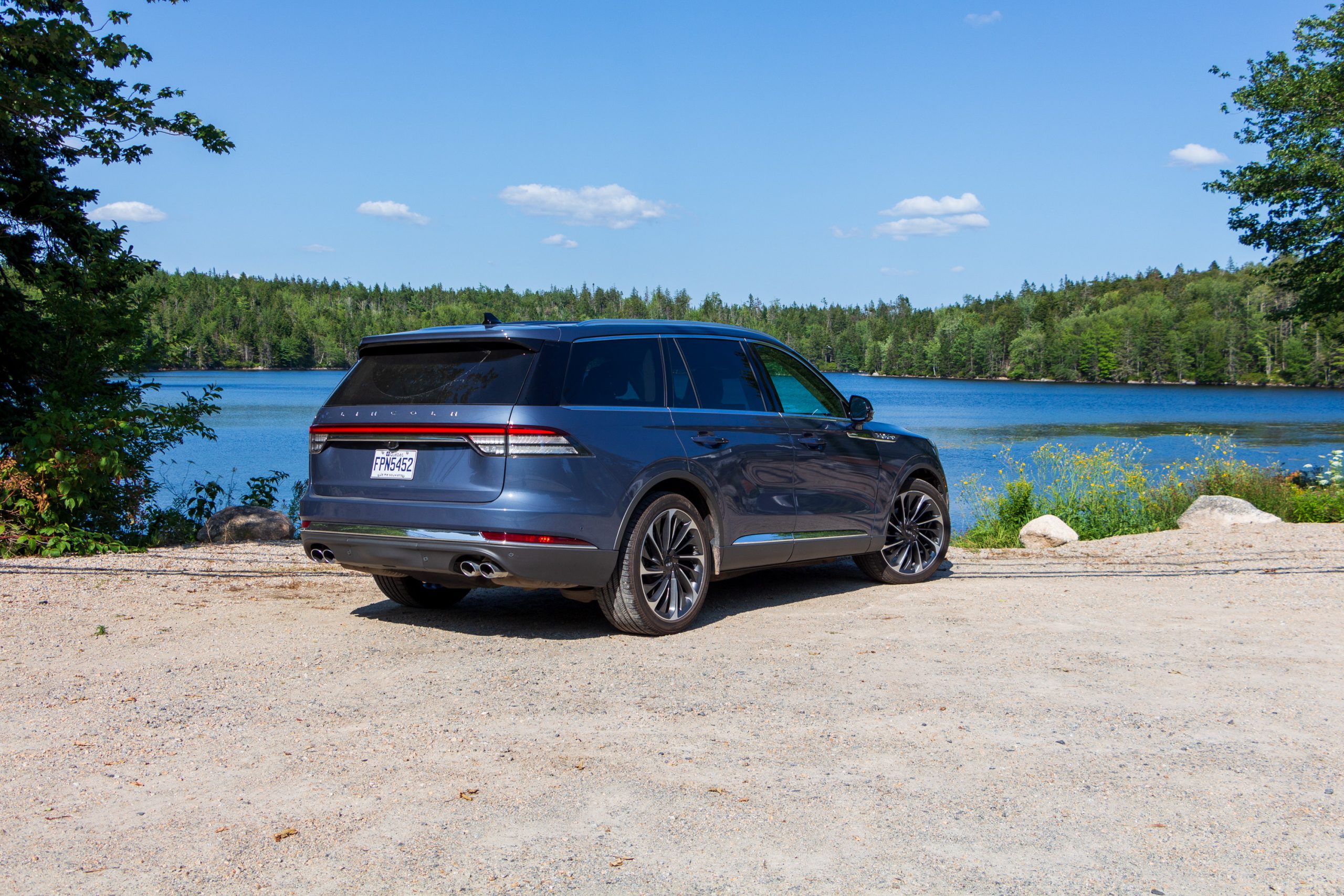 The V6 delivers excellent power and handily beats many of its competitors, but again it's the execution. Lincoln's philosophy is Quiet Flight and effortless smoothness, but the driveline doesn't deliver. While I'm tempted to make airplane comparisons, it isn't quite that loud. It does, however, send noise and vibrations through the cabin at idle and on the highway. The power delivery was also harsh, especially from a stop, causing the Aviator to lurch and jerk forward in a fashion decidedly un-luxurious and not pampering.

The air suspension, while it filtered out large bumps, also never settled down. The vehicle felt like it was always moving around on its four dampers, searching for a neutral position it couldn't find. The 10-speed automatic didn't help, offering some very jarring shifts and making numerous confusing choices in normal driving.

Fuel economy from the V6 is estimated at 13.7 city and 9.6 highway. My own driving returned 12.0, with the onboard brain's judicious use of the start-stop system helping to keep the engine from wasting fuel as much as possible. If that's not sufficient, the Grand Touring model is a PHEV that gives you more power and uses less fuel. It's also smoother. 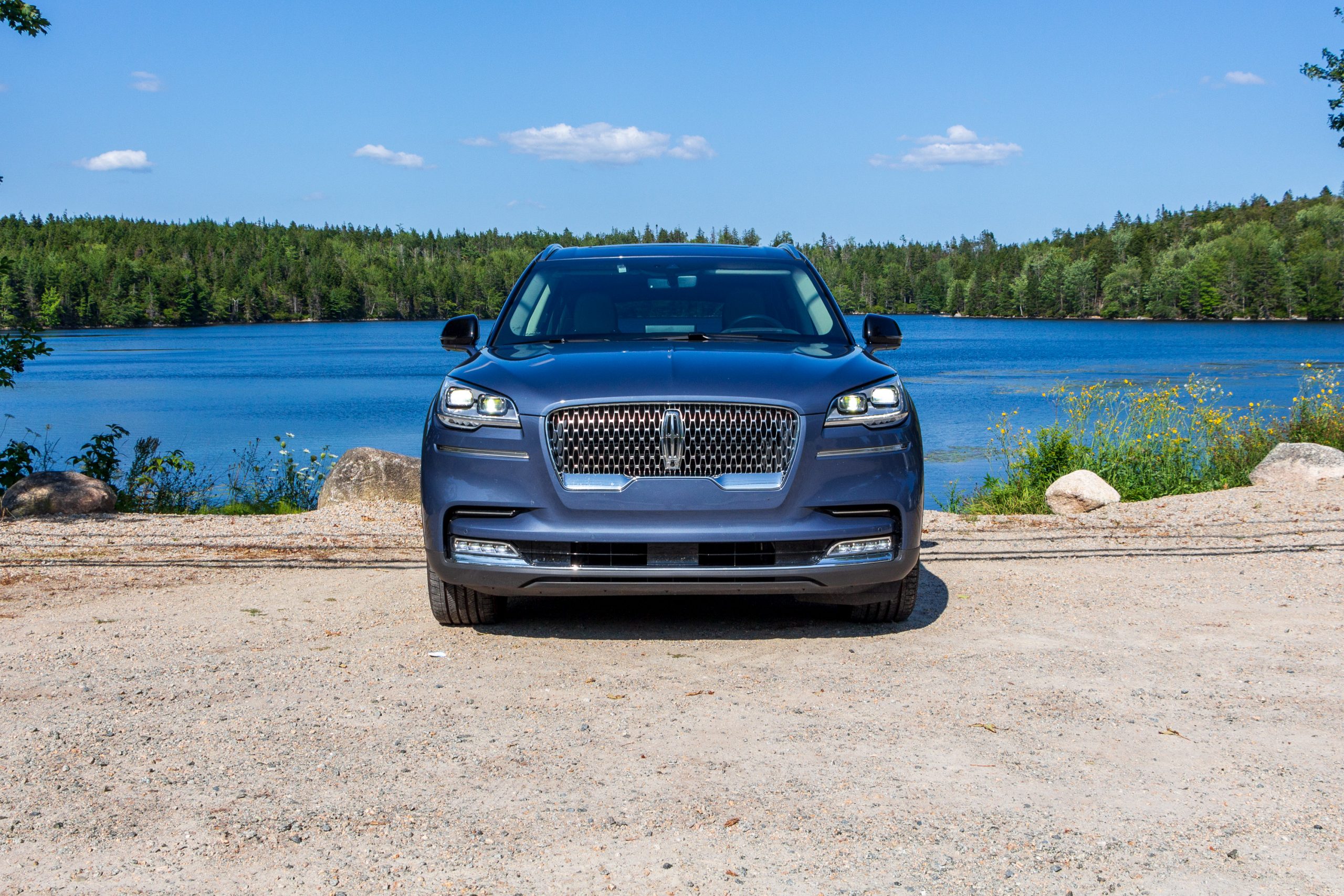 The Grand Touring Aviator might make your pick of the litter even easier. Want those looks and that cabin, but want quiet, smooth and efficient? Get the PHEV. Otherwise, make sure you can find yourself a comfy setting in the Aviator's fancy seats before you consider taking one home.