Join the Conversation (0)
The Honda Accord has long been a staple of the mainstream mid-size sedan class, because it literally did everything right: it was spacious, comfortable, relatively fuel efficient and reasonably priced. This generation Accord debuted in 2018 with a shapelier curved roof that didn’t sacrifice rear seat headroom or cargo space., while also receiving an update for the 2021 model year that added sexier 19-inch wheels and low-profile tires.

Yes, those are 40-series gumballs on your Honda Accord family hauler – aggressive 235/40/V19s, to be exact.

“Hello fellow kids,” is the meme that comes to mind.

A hybrid version of this generation Accord also arrived in 2018, after a low-volume plug-in version was available in certain U.S. states for a few years, but never in Canada, unfortunately. 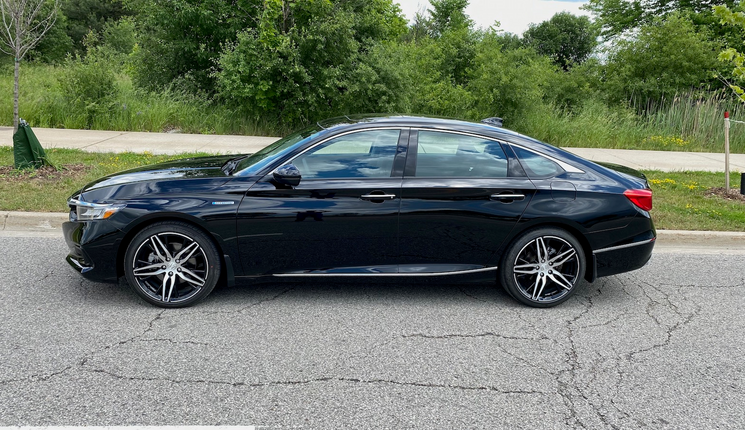 The ’21 Accord Hybrid is at the top of the model range in terms of price and fuel-saving technology, with official fuel consumption numbers lower than the smallest subcompact econo-hatchbacks. Perhaps it was that previous advanced plug-in version of the Accord that makes the current gas-and-go hybrid seem…fine, but unambitious, technology-wise.

Before diving into the impressive fuel efficiency figures, which buyers may be looking at much closer in light of recent gas price spikes across the country (and globe), it’s worth starting where most family sedan buyers have traditionally prioritized: interior room, comfort, and convenience features.

With 3,463 litres of overall interior volume, the Accord Hybrid lands ahead of its main Toyota Camry Hybrid rival, but slightly behind the more recent Hyundai Sonata Hybrid in passenger space. It also means that though the Accord is the quintessential “mid-size” sedan in North America, this interior roominess has both it and the Sonata officially rated as a full-size sedan by Natural Resources Canada, and therefore offers more passenger space than pricier vehicles like the Lexus LS 500 and the Audi A6. 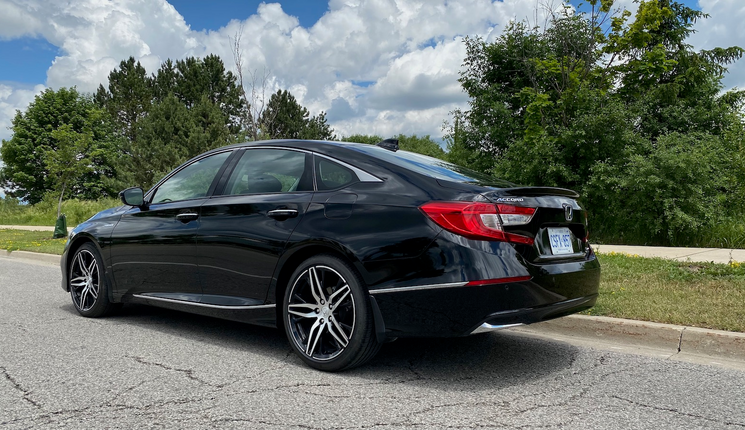 Climbing into the Accord Hybrid’s spacious cabin certainly reinforces that impression, with the lack of a central transmission shifter increasing the feeling of spaciousness with a smidge of modernity. I say a smidge because there’s not only multiple buttons replacing the shifter, but there’s seemingly buttons everywhere, slathered all over the steering wheel, and in a cluster just above the driver’s left knee.

Like the lighted ring around the ignition keyhole of my father’s long gone 1990 Accord (a revolutionary feature at the time), there’s still a feeling in this Accord that Honda has thought long and hard about how drivers and families will use this car. Features such as wireless CarPlay and AndroidAuto, auto high beam, remote start, heated seats and steering wheel along with wireless phone charging are all standard on the ’21 Accord Hybrid, which starts at $36,105.

That starting price is roughly $3,500 higher than a base ’21 gas-only Accord.

This particular Accord Hybrid tester was the top Touring model, which runs for $42,805 (roughly a $4,000 premium over the Accord Touring), and adds high-end features such as a head-up display (HUD), couple-friendly memory seats, ventilated front seats with heated outboard rears, a HomeLink garage door opener, and leather all around. 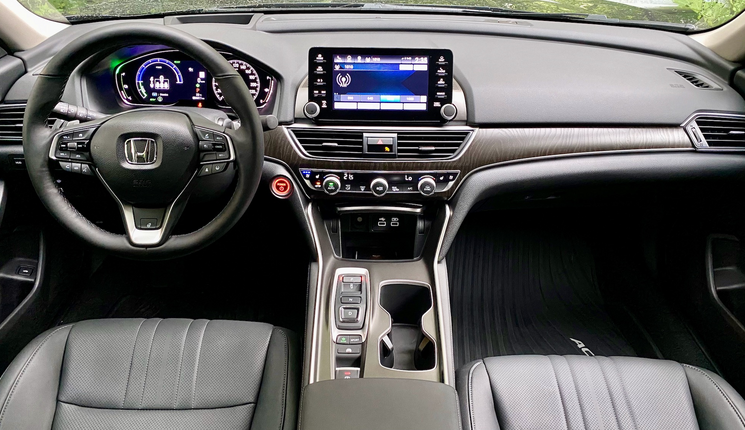 All of these features work well, with the ventilated seats in particular shaming many pricier luxury models that don’t offer them, though the HUD functions will basically disappear if you’re wearing polarized sunglasses. There are two traditional USBs easily accessible to both front passengers, but none of the newer type C variety, which reinforces the handy-but-dated theme inside.

The Accord leads the way in cargo room and flexibility amongst its hybrid sedan rivals, offering the most space (473 litres) of all Accords, and trunk room unencumbered by added hybrid componentry. Granted, a sedan trunk’s smaller opening is never going to offer the flexibility of a taller SUV/crossover, the latter of which has almost taken over the family hauler segments from sedans and increasingly minivans.

One of the reasons some drivers prefer sedans is the more responsive driving feel that naturally comes with their lower centre of gravity. This Accord Hybrid manages to keep a fairly comfortable ride while leaning very little in corners, helped in part by an adaptive damper system on Touring models.

Motivation here comes from a combined output of 212 hp between its 2.0-litre Atkinson cycle four-cylinder engine as well as a front-mounted electric motor, all of which is transmitted via CVT connected to what may look like “shift” paddles, but these are actually regeneration paddles. Hitting the right one feels like a downshift, but you’re choosing between four levels of deceleration meant to slow the car down and transfer energy to the battery, while the left one ‘upshifts’ to lessen this feel. 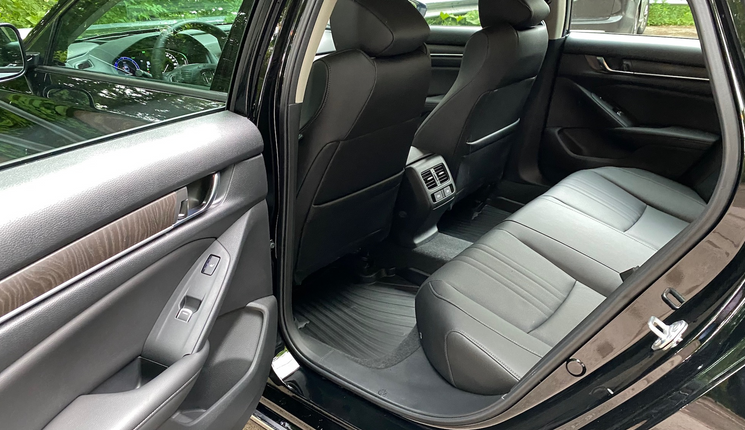 And now to the Accord Hybrid Touring’s fuel consumption. Officially, its combined city and highway figure is a frugal 5.5 L/100 km, which is roughly on par with the Camry Hybrid and a few tenths thirstier than the Sonata Hybrid – the base Accord Hybrid with the less sticky tires matches the Sonata’s 5.0L/100 km figure. But for perspective, it’s also much less than the 7.0+ ratings of tiny hatchbacks like the Chevrolet Spark or the three-cylinder Mini Cooper.

In the real world, where hybrids traditionally have not always lived up to their super stingy official ratings, this Accord Hybrid came very close, averaging 5.9 L/100 km in largely urban driving. That’s on regular fuel, which will also help save money at the fuel pump, as opposed to some entry luxury sedans that can sometimes be found starting near the fully loaded Accord’s low-mid-$40k price point.

Keep in mind though, that price point is also encroaching on the post-federal government rebate price of the Tesla Model 3 sedan and the similarly all-electric Volkswagen ID.4 crossover.

Fueling either of those (from home, no less) will cost significantly less than any hybrid vehicle, though there is a higher upfront cost still for BEVs generally (unless you’re lucky enough to live in Quebec or BC, with their additional vehicle and charger rebates). 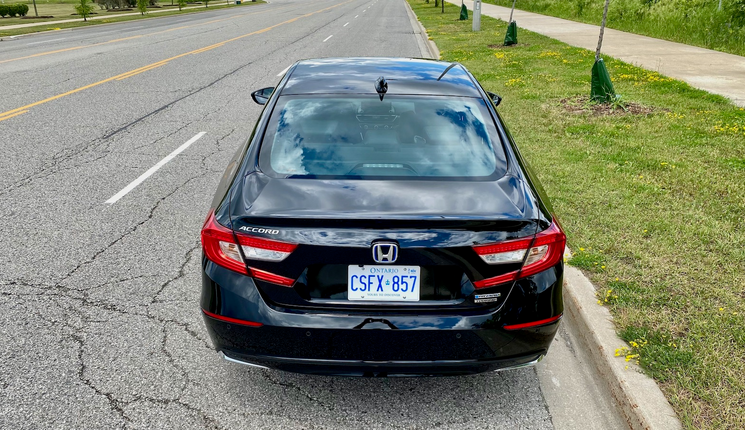 In the end, amongst hybrid sedans, driving this roomy, fine handling and comfortable four-door makes one wonder what else does they actually need in a people-moving four-door, besides perhaps a somewhat less dark and sombre interior appearance. The Accord Hybrid’s features and old-school usability are top-notch, and it’s very reasonably priced for a top-line “mid-size” sedan.

Still, like its powertrain that’s green but not the greenest, and an interior that’s easy to use yet seems dated, there’s an air of winding down inevitability to driving it. Especially after having driven its BEV family hauler rivals. If you’ve never driven a plug-in vehicle, or are not impressed by modern luxury vehicles more dominated by screens inside than wood and leather, this Accord Hybrid may seem as modern as anyone needs.

And yet it’s tough not to look back at that Accord PHEV compliance vehicle previously offered to its American customers years ago, and wonder how much greener and more ambitious the greenest Honda Accord could be by now.