Join the Conversation (0)
When one-time football star and later comedy film actor O.J. Simpson went for his last run on the freeways of Los Angeles in 1994, he was riding in the back seat of a Ford Bronco.

The TV networks all cut into regularly scheduled programming in order to cover the chase live while thousands in L.A. stopped their cars and got out to applaud, seemingly indifferent to the fact that the man they were cheering had likely murdered two people.

I can also imagine there were other people who were not happy to see what was going on either. Not happy at all. In fact, some of them were undoubtedly cringing. Those people would have been executives of the Ford Motor Co., some of whom were undoubtedly wondering why Simpson couldn’t have taken it on the lam in something other than a Bronco.

Two years later, either by accident or design, Ford stopped building the Bronco. The official reason was that they weren’t selling enough of the two-door SUVs, claiming that the buying public wanted four doors.

Ford officially deep-sixed the Bronco in 1996 after building it for 30 years. Internally, however, a small group of Bronco enthusiasts, whispering amongst themselves to “never say die,” kept the dream of the car alive and here it is 2021 and guess what?  A revamped and redesigned Bronco Family of vehicles is back – a two door, a four-door and a smaller SUV called the Bronco Sport – all with 4X4 capabilities that will go over any type of terrain leading to outdoor adventures. 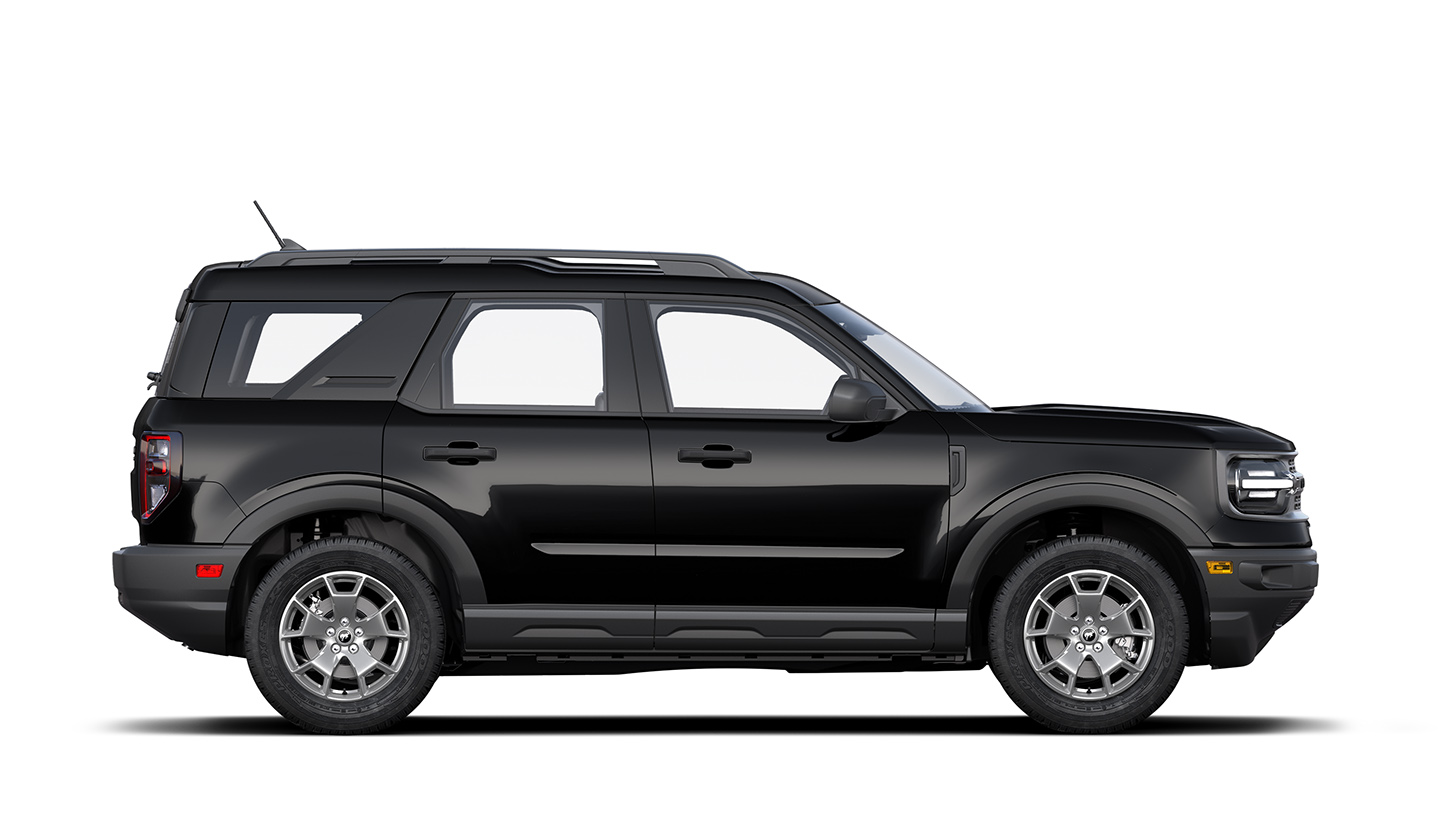 That they are on the right track, let there be no doubt. Neighbours of mine out walking their dog stopped to chat the other day while I had one parked in my driveway. “How do you like it?” they asked. “Our daughter wants a Bronco Sport.”

So, there you go. Here’s what she’ll be getting herself into.

The Sport is easy to enter and exit. Once inside, every control you can think of – well, not everything, but – is on the steering wheel, with creature comforts like seat and steering-wheel heating buttons and other climate controls directly under the eight-inch touchscreen that has AM, FM and Sirius satellite radio, navigation and so-on. In short, everything you have to touch is within easy reach. Oh, and it’s compatible with Apple CarPlay and Android Auto too.

This is important – and congratulations to Ford for doing this. I’m sure other OEMs have done this but I haven’t come across another example, so Ford gets the kudos: when you stop and turn off the engine, the whole touchscreen lights up with these words – Check Rear Seats For Occupants. And a bell rings to draw your attention to the warning. This, of course, is to guard against anybody leaving a baby or small child in the back seat, which has happened far too often.

Meantime, the seats are attractive, comfortable and easy to adjust. There are two good cup holders (you would be surprised at the number of deficient cup holders out there) with USB ports within easy reach. As there is no room underneath the seats, Bronco Sport has solved that problem by creating storage space within the rear seats. Those rear seats fold down to increase the amount of cargo space and Ford says there’s enough room back there for the two front-seat passengers to fit in a trail bike apiece. The roof rack can accommodate tents, skis, kayaks and camping equipment. 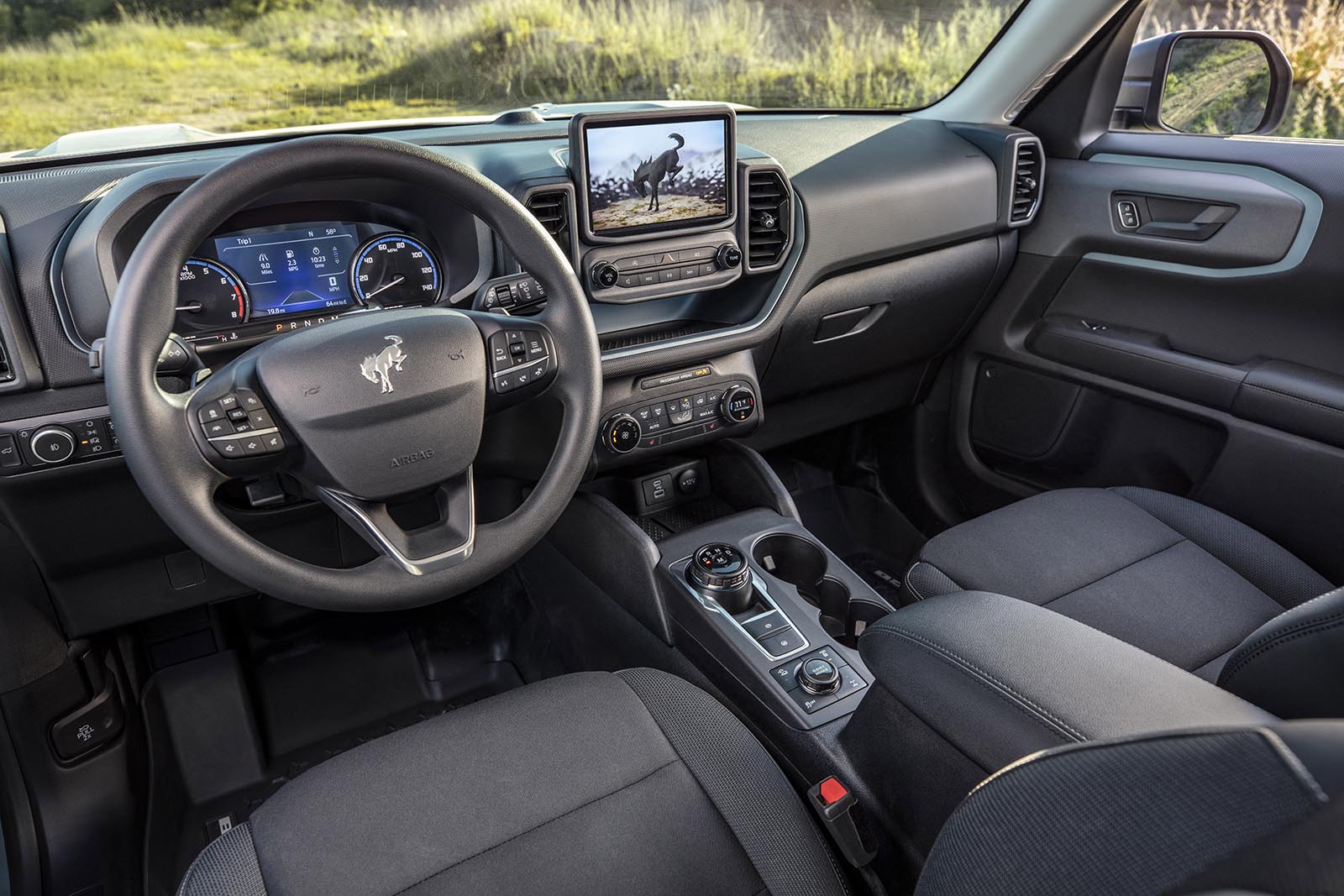 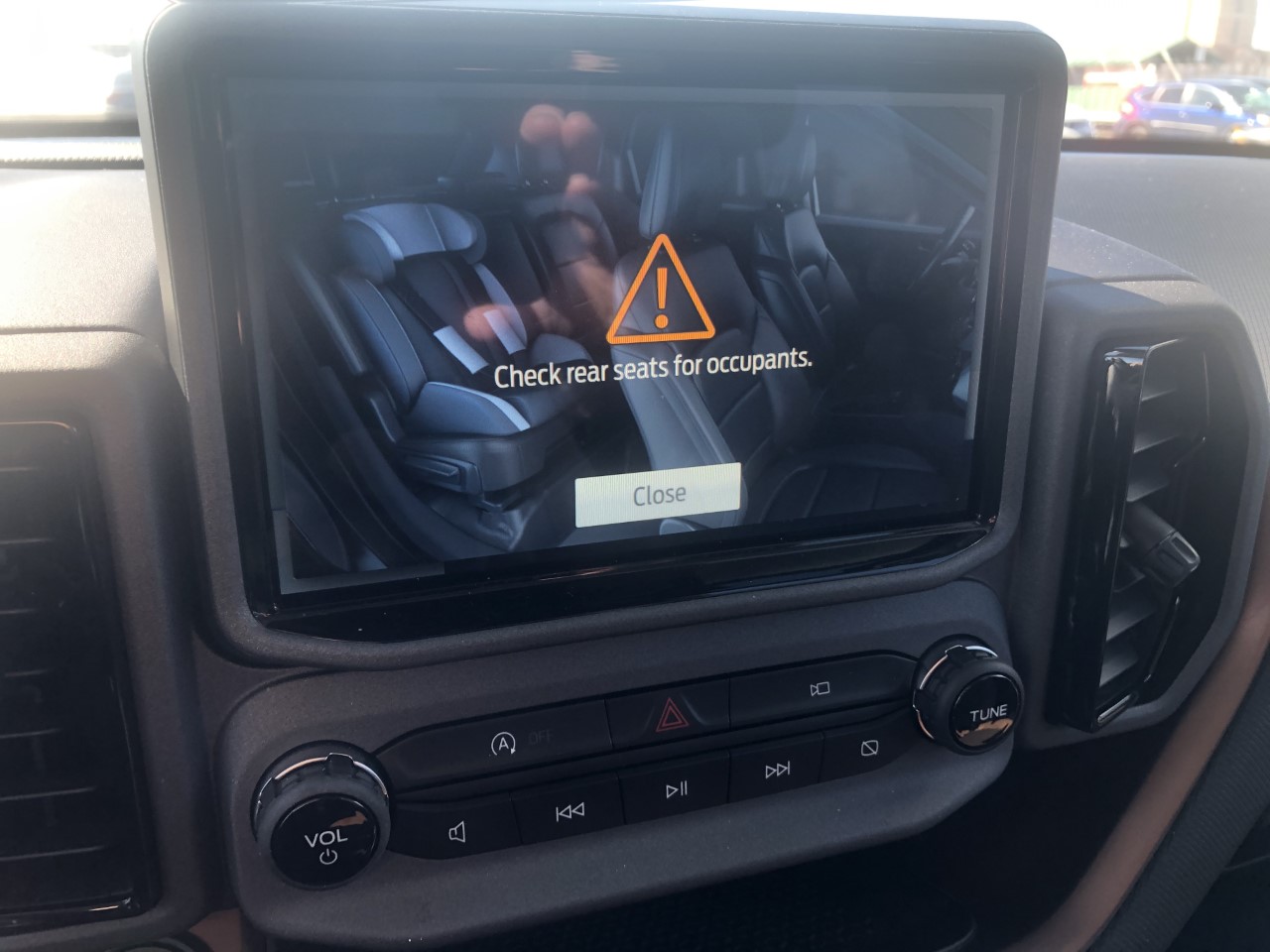 One nit here (and this is the same nit I have with just about every other small SUV on the market): there is no room for people to sit in the back seat. I don’t like to complain, but my wife and I are both tall and we both have our front seats pushed/moved right back. The back seats, as mentioned, fold down but they can't move back so it’s virtually impossible for us to sit back there. Not that we would (we’re up front) but anybody else our size would be very uncomfortable. Children, maybe, but we won’t have any young ‘uns left around the house so are unable to conduct a test.

Once in motion – you can have a push-button starter – the ride is smooth on fresh pavement but if you hit a bump in the road you feel it. It’s not jarring, but it’s noticeable. There’s automatic stop-start at red lights and stop signs, which saves fuel. The compact SUV has good pep and the brakes are sharp. It’s a good car for around town.

But this is an off-road vehicle. It’s really its raison d’etre. It's perfect for people with cottages, hunting camps and who like to go camping. Or to go to Orchard Park, N.Y., to tailgate in the parking lot before a Buffalo Bills football game. There’s even a table that can be set up inside the back of the Bronco where you can set up the condiments for the hot dogs.

Up to seven modes are available that will help the driver take the Sport just about anywhere. Standard modes include Normal, Eco, Sport and Slippery & Sand and you can pay extra for modes like mud/ruts and rock crawl, if you wish. Trail Control tech is like cruise control but because you’re driving across a field instead of on the 401, it can be set at 30 km/h going forward and 10 in reverse. This is really great stuff.

Okay, time to wrap this up – but I saved the best for last. Ford gave me a Badlands model for this test and it’s powered by a 2.0-litre EcoBoost engine that puts out 245 horsepower and 275 lb-ft of torque. The other three models – Base, Big Bend and Outer Banks – have the tried-but-true 1.5-litre EcoBoost engine that produces 181 hp and 190 lb-ft of torque. Both engines are mated to an 8-speed automatic transmission. The Badlands model has steering-wheel-mounted paddle shifters. 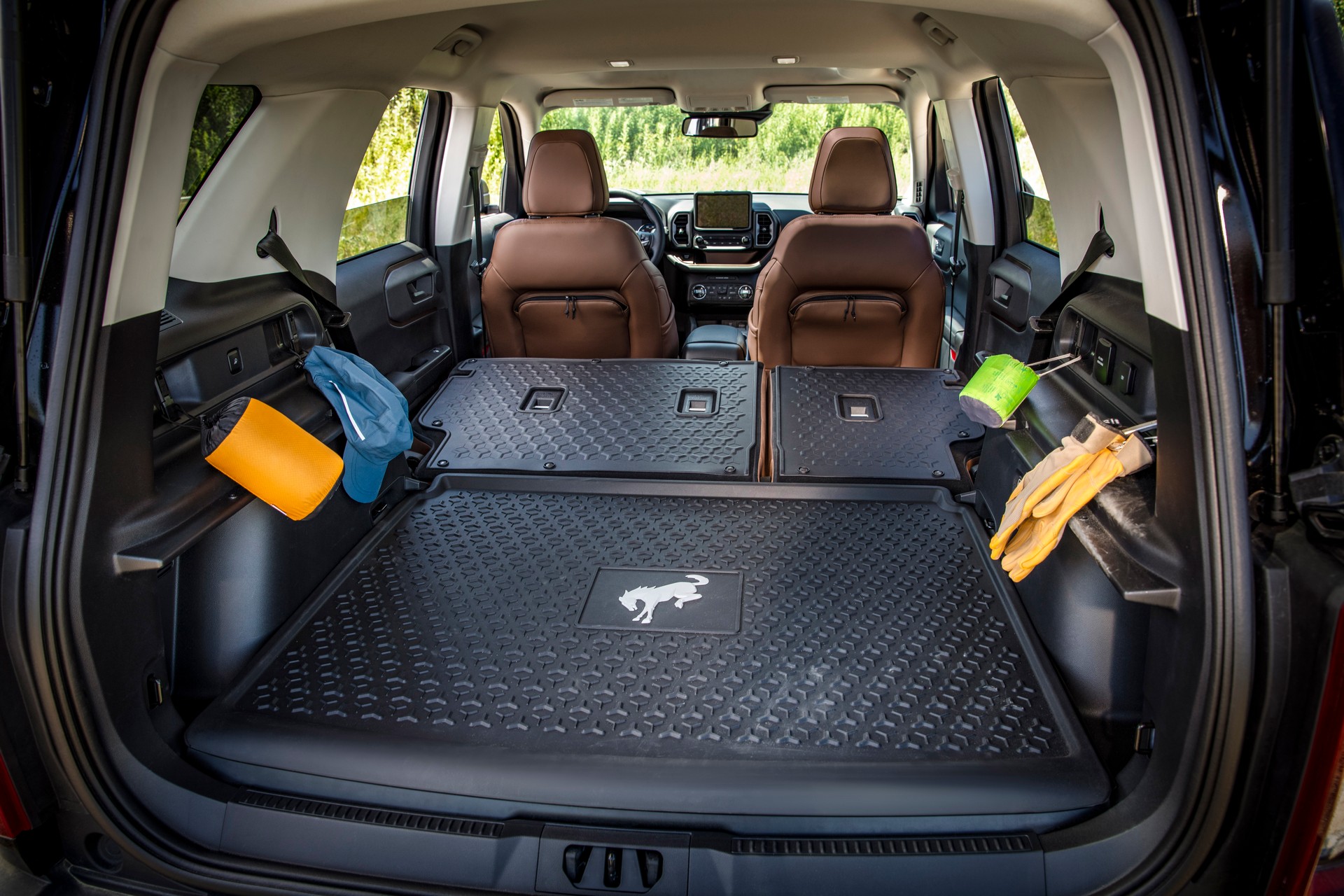 A couple of other things: if it’s after dark and you want to throw a little light on whatever you’re up to, whether it’s a late barbecue or a summertime game of chess, there are two LED spotlights – one on each corner of the rear lift that can be adjusted to help you see what you’re doing.

And the Ford Co-Pilot360 driver assist technologies are standard on all models, which help keep you on the straight and narrow on the highway and from running into a tree in the wilderness.