Join the Conversation (0)
The Chrysler Pacifica is one of the easiest vehicles to live with on a daily basis.

You need only drive it for a short while, and it will quickly become your most loyal companion. It’s ready to take on whatever your day can throw at it. Need to hop to the shops and buy an oversized log of Mortadella and a 30 lb wheel of cheese? Sure, throw them in the back. Are your hands full of bags and children after an exhausting holiday shopping spree? Dual power sliding doors will come to your rescue. Worried that the new child seat you just bought won’t fit? Don’t be, it will.

Nearly everything about the Pacifica is easy, and in our busy lives of pickups and drop-offs, long lines, and traffic, having something that just works when you want it to and doesn’t add additional stress is as good as therapy. The Pacifica minivan was my therapy for a week, and giving it back wasn’t easy. 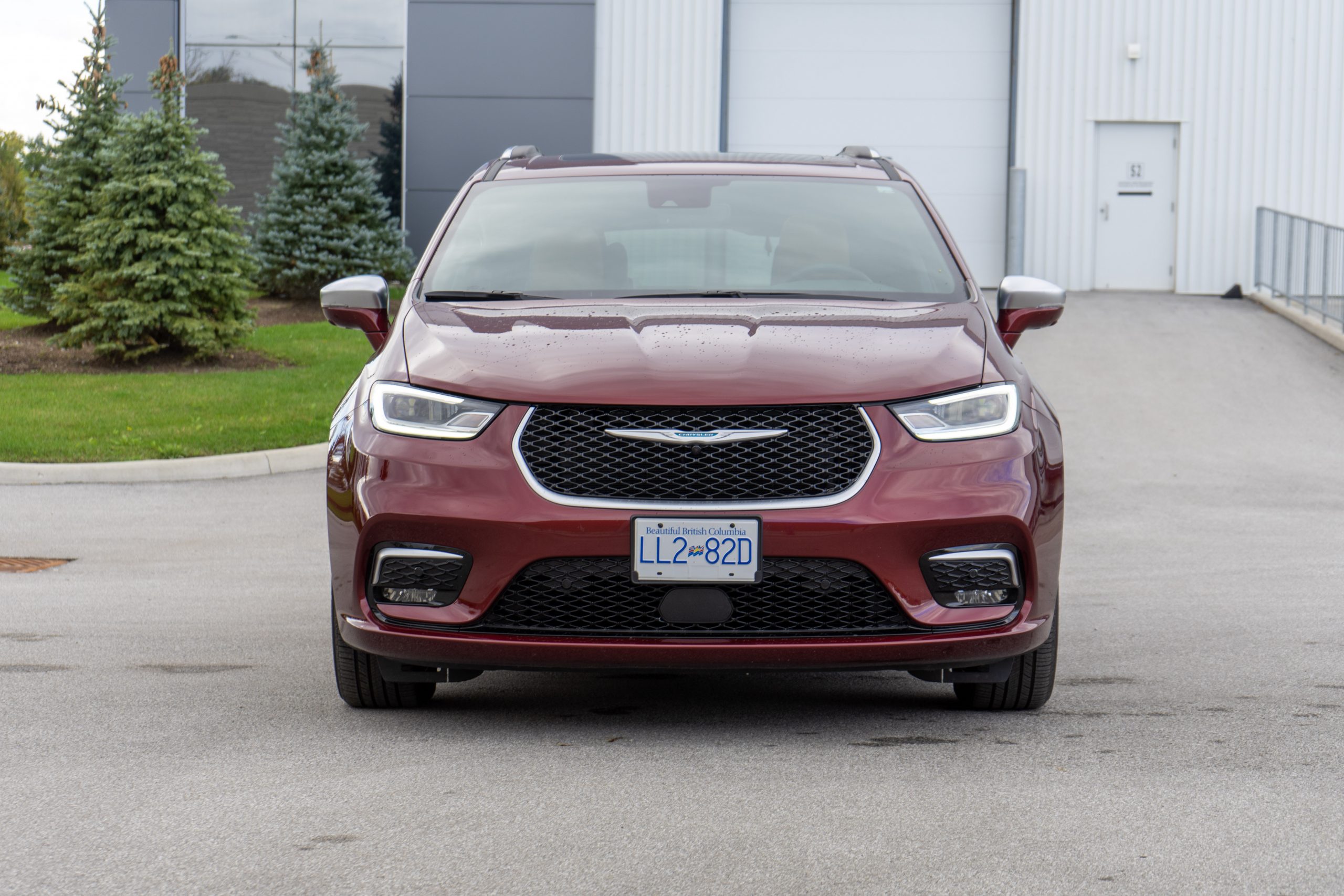 Refreshed for 2021, the Pacifica features updated styling, and a whole raft of new entertainment and safety features including the first application of the Uconnect 5 infotainment system on a super sharp 10.1-inch screen with Alexa integration. You or anyone in the van can ask Alexa to play your favourite music, take notes, or give you a weather report. If you have an Alexa-enabled device at home you can even ask it to unlock or lock the doors and start the vehicle. It’s also the first Pacifica to get all-wheel drive, although we’re not going to talk about that here since the focus of this review is the plug-in hybrid model, which only comes in front-wheel drive form.

The hybrid powertrain carries over unchanged and so does the Pacifica’s status of being the only plug-in hybrid (PHEV) minivan on the market. Under the hood you’ll find an Atkinson cycle 3.6-L V6 mated to a dual-motor electrically variable transmission (EVT) driving the front wheels exclusively. A 16 kWh battery pack resides under the floor and gives the Pacifica hybrid an all-electric range of about 50 km. Total system power is listed at 260 hp and if you have a home charger installed or plug in to a level 2 public station, a full charge will take about 2 hours. It’s also worth noting that the battery pack lives in the well that the second row of seats would fold into on other Pacificas, meaning “Stow and Go” applies only to the third row for the hybrid. 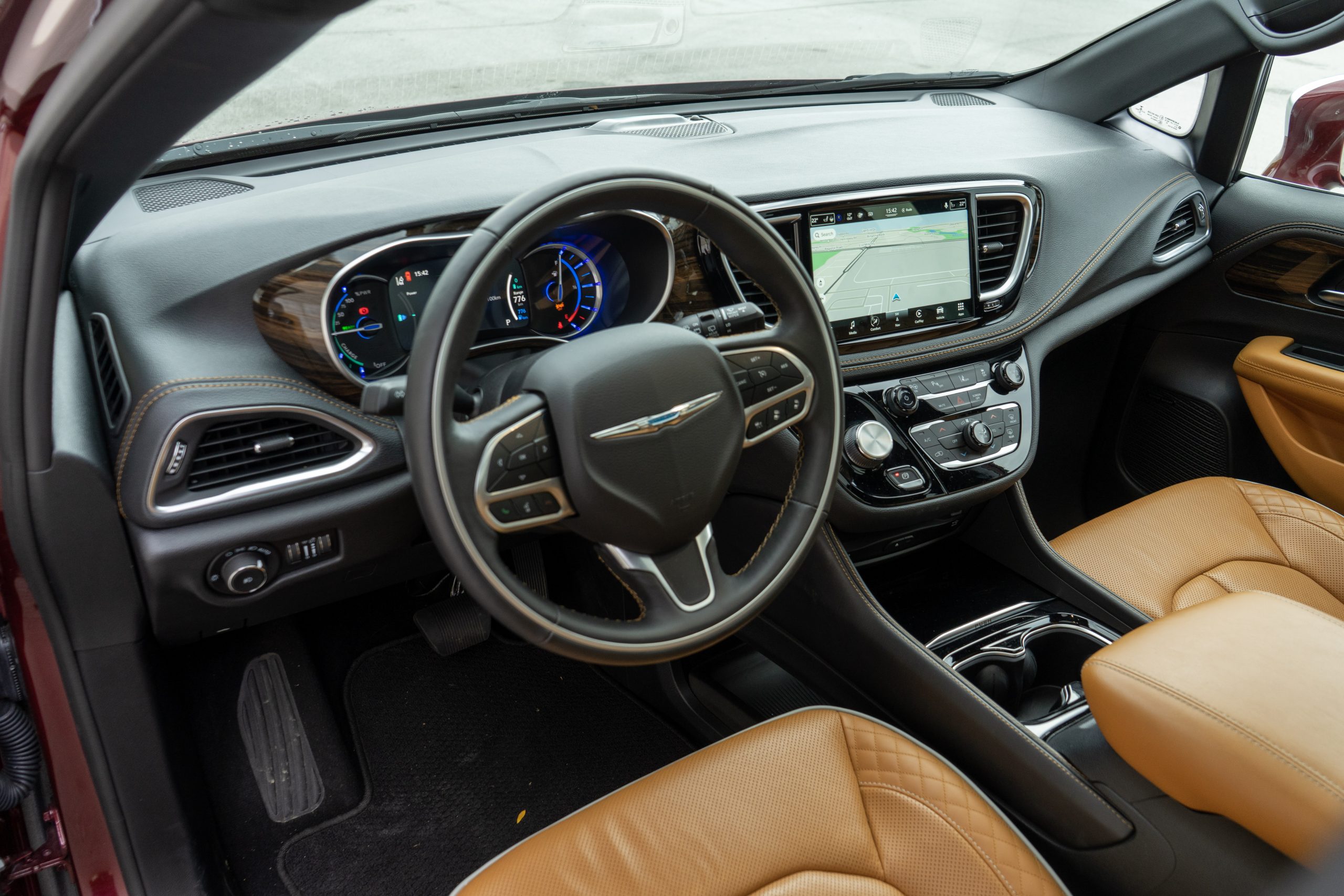 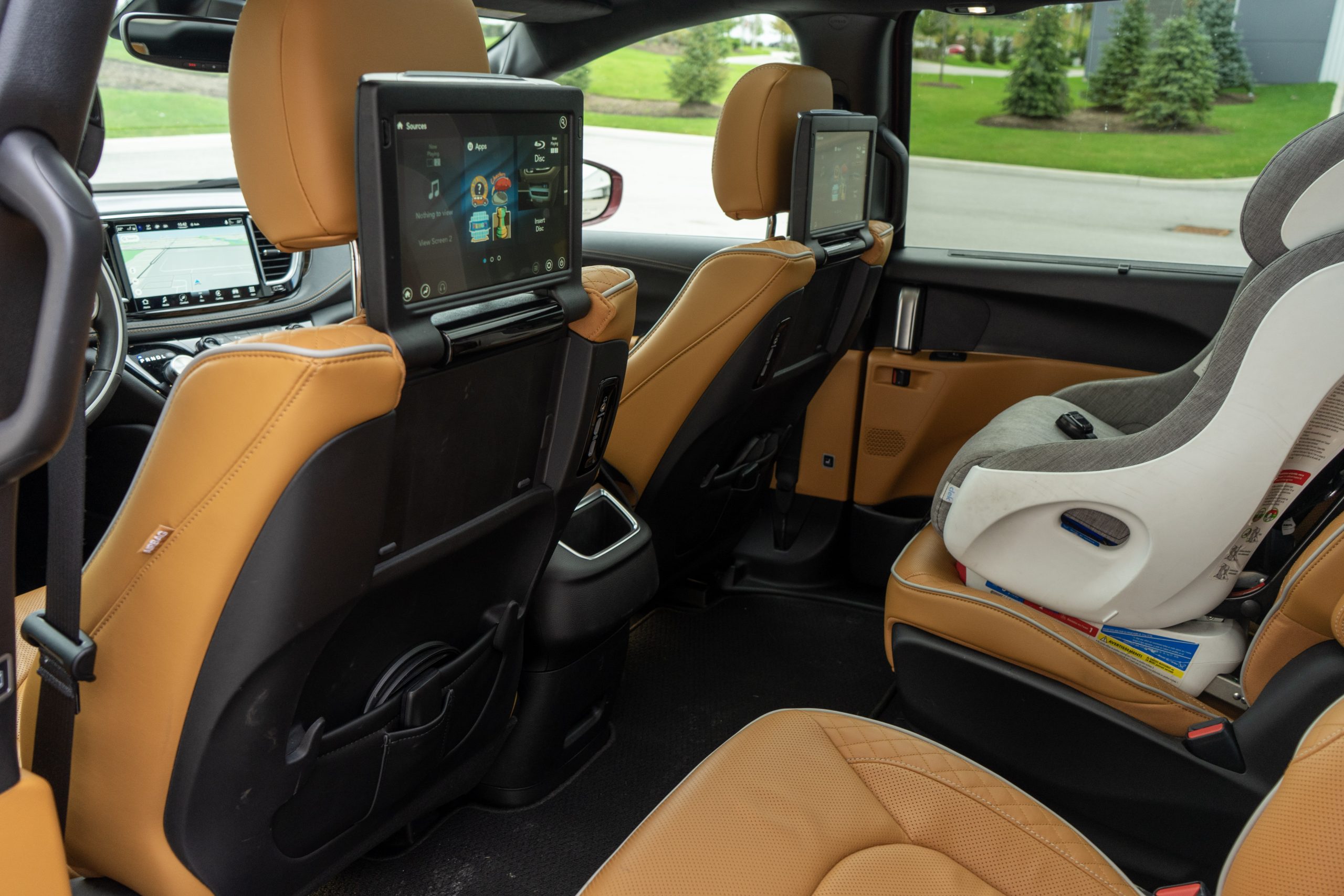 Option up to the Pinnacle as seen here, and you’ll be surrounded by luxuries you didn’t expect in a van. Creamy brown leather with beige piping, heated and ventilated seats, captain’s chairs in the second row each with its own entertainment screen and wireless headphones, window shades in the second and third rows, a 20-speaker Harman/Kardon sound system, and the list goes on.

The cabin of the Toyota Sienna I drove right before this, as nice as it was, just didn’t have the same wow factor. Which I suppose is fine, because supple leather and contrast stitching might not hold up very well when faced with melted crayons and emulsified granola bars. Those optioning up might want to be wary of this unless your kids are a bit older and less inclined to splatter your new finely stitched interior with applesauce.

The good thing is that those entertainment screens come preloaded with games and activities, and can connect kids to streaming services or the Internet. Think of it as a built-in road trip hack for keeping the little ones occupied on those long drives.

Then there’s the new FamCAM HD ceiling-mounted camera system where you can keep watch on the second and third-row seats directly on the centre screen. 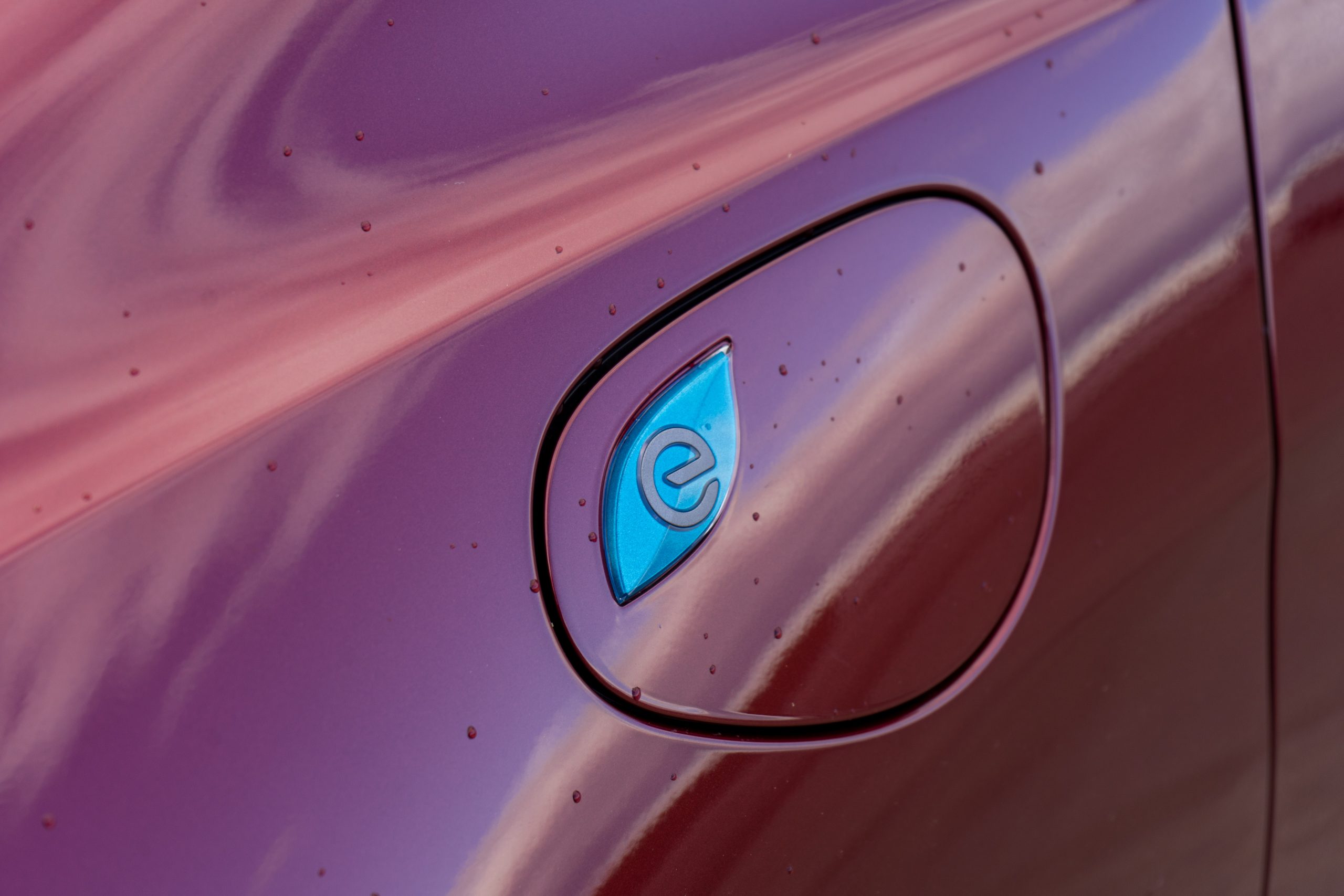 This was the first PHEV I’ve driven that provides almost no indication that it is one. Chrysler’s goal here was to offer a seamless experience that requires no input from the driver. As long as the battery is charged the system will manage all the intricacies of power distribution and use the ICE engine only when absolutely necessary.

While that might work for some, I prefer choice, and most PHEVs give you the option of running in pure electric mode, or even gas mode, preserving the batteries for when you need them. There’s not even an option to charge the batteries via the ICE engine here, although you do recuperate some energy through the regenerative braking system.

Because of the way it functions, I wasn’t able to get a true read on how far it goes in electric mode as the ICE engine does fire up every so often but upwards of 40 km is not out of the ballpark.

The latter was closer to what I saw after a full week of putting this living room on wheels through its paces with the majority of my driving done on rough city streets. 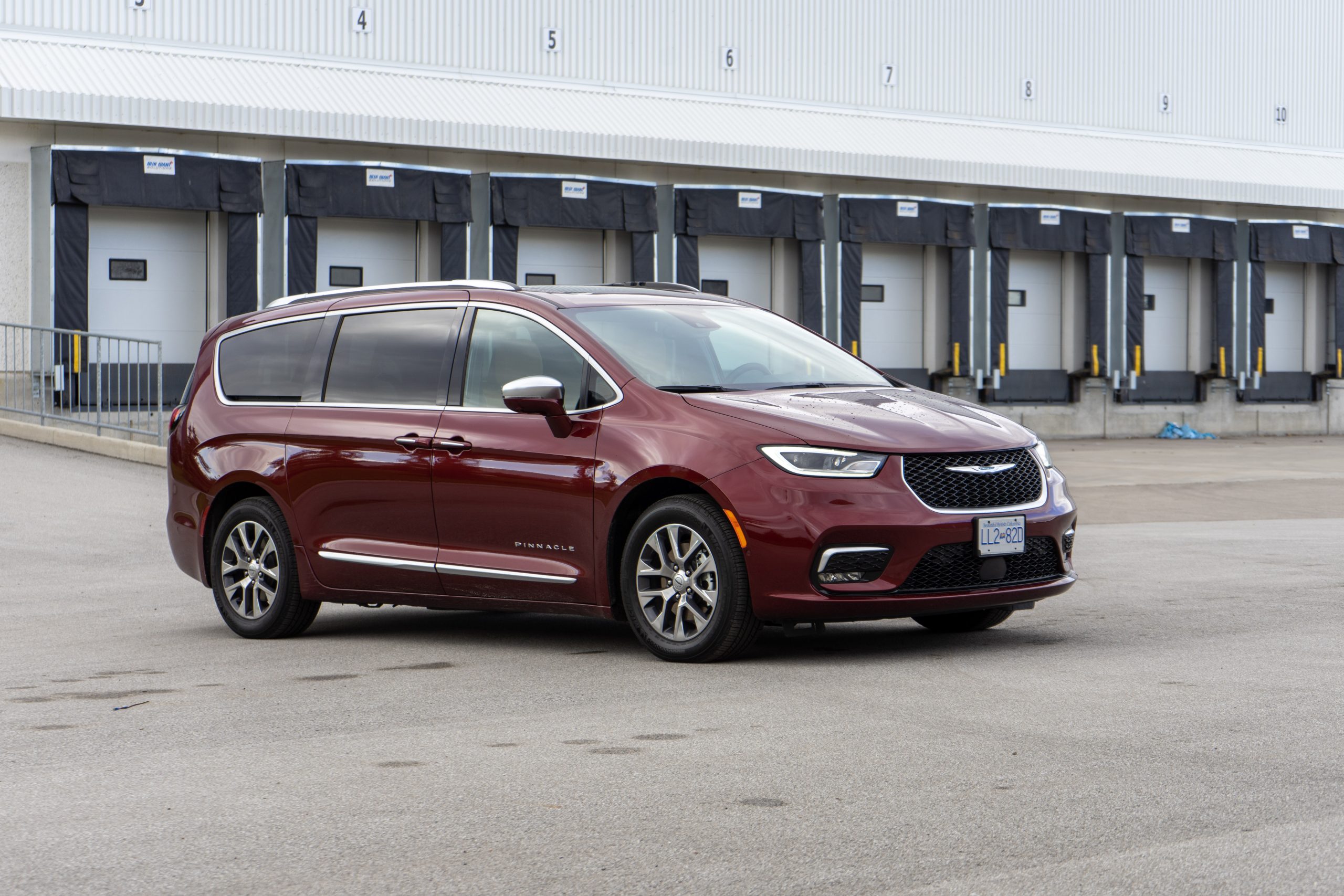 The Pacifica is a big vehicle, but never feels like it. It’s about as maneuverable as the non-hybrid despite the extra weight added on by its battery pack. Where it really shines is in its whisper-quiet operation and supple ride. Bumps, streetcar tracks, and potholes do little to disturb weary passengers and handling is always secure and stable.

It really feels like a full-fledged luxury vehicle and it’s here where you find some justification for its $62,090 price tag. Yes, that’s right, this minivan costs over 60 grand and here in Ontario where there are no provincial incentives, it’s a much tougher sell. A point reinforced by the British Columbia license plates on my tester, one of the provinces where the bulk of new PHEV and EV inventory goes due to provincial rebates. In Quebec, combined with the federal EV incentive, shoppers qualify for $13,000 off the purchase price of a new Pacifica bringing it much closer in line with the new Toyota Sienna.

While the Sienna is not a plug-in hybrid, it’s still a very efficient hybrid van and with AWD available on all the trims it’s by far the value leader here, at least in this province.

If, however, your commute is short, and you are able to plug in regularly, the Pacifica with its 50 km of electric-only range will theoretically use almost no fuel.

It’s also one of the smoothest, and most comfortable vehicles out there regardless of trim or how you spec it. For the ultimate in family conveyances, the Chrysler Pacifica Hybrid is hard to beat.