Join the Conversation (0)
Very few new automobiles that were released in 2020 have garnered as much controversy as the 2021 BMW 4 Series. If there’s an unwritten rule among the BMW faithful, is that fiddling with the kidney grille is a sacrilegious act; one BMW has taken the liberty of undertaking with little remorse about how its owners would react.

Personally, I’m only starting to be at peace with the new, vertically inclined and very large schnoz. It did however attract a lot of eyeballs wherever I drove the car. But perhaps what stayed with me the most after driving this second-generation 4-Series was the realization that it has more than ever distanced itself from the 3-Series sedan on which it’s based. For better or for worse.

While riding on the same modular, and frankly brilliant, CLAR architecture as the 3-Series and identical 2,849-mm wheelbase, the new 4-Series is a full 58 mm longer, 25 mm wider and 40 mm lower than its sedan twin. It’s also a considerably heavier machine, weighing in at a girthy 3,986 pounds (1,808 kg). This makes it a full 173 pounds heavier than a 3-Series.

And while that front end may look sort of weird, there’s no denying the resemblance to the larger 8-Series, especially from the side profile. Although this 4-Series doesn’t resemble a Ford Mustang as much as its big sister, which is good-news for 4-Series owners. 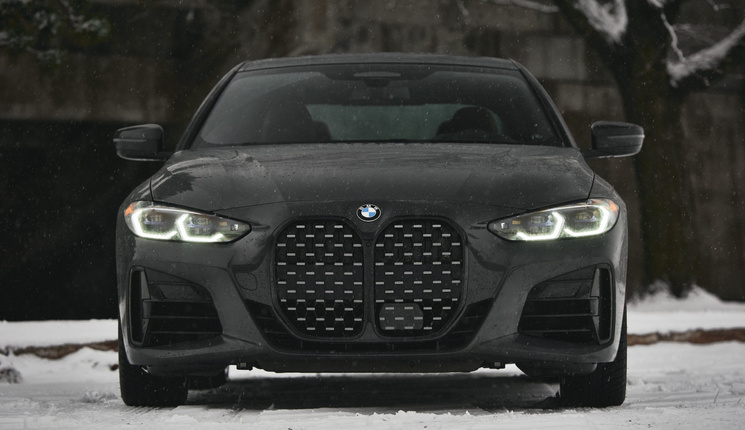 It’s fair to say, then, that BMW wants everyone to know that its new 4-Series is no longer just a two-door 3-Series. It’s a full-on grand tourer now, a car whose rear seat is finally usable thanks to vastly improved head and leg clearance.

The model you see here is the top-flight M440i, the most potent iteration of the model before entering M4 territory. While entry-level cars - which wear the 430i nomenclature - are powered by a turbocharged 2.0-litre four-cylinder good for 255 horsepower and 294 lb-ft of torque, this M440i gets BMW’s excellent turbocharged 3.0-litre straight-six. It’s an engine that also powers the Toyota Supra, M340i and Z4 M40i, also known internally as the B58.

Power is rated at a class-competitive 382 horsepower and 364 lb-ft of torque. All of it is mated to an eight-speed automatic transmission sourced by ZF in Germany, while BMW’s xDrive all-wheel drive system comes standard on all models sold in Canada.

What’s more, the M440i is equipped with a 48-volt mild hybrid system that contributes to adding 11 horsepower to the engine, as it’s building boost. Acceleration from 0 to 100 km/h is therefore claimed by BMW in just under four seconds, which is downright mind-blowing for this category of cars. Remember, this isn’t even the M4 yet. 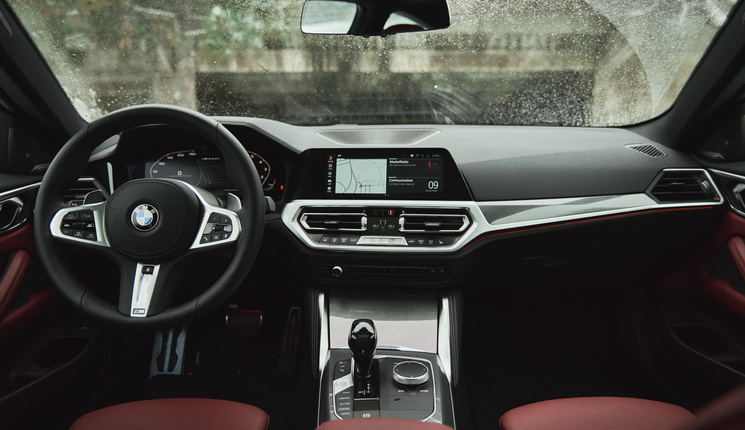 So yes, the M440i is blindingly quick off the line, and its impeccable automatic transmission quickly makes you forget a six-speed manual is no longer available. Unfortunately, the car’s driving dynamics don’t quite match the visceral delivery of power.

I’m not saying the M440i isn’t a great performer on a twisty road, because it is. It’ll provide grip for days and its ability to carry speed effortlessly as you bathe in a comfortable, highly functional and impeccably put together cabin remains a BMW strongpoint. What I’m all about is that the steering wheel simply doesn’t feel as connected to the car anymore. There’s an annoying rubberized feel here that you don’t get from an M340i. This means you can’t commit to an apex with the same kind of confidence as in the former car.

Perhaps the lack of tactility comes from BMW’s variable-ratio steering rack whose quick ratios amplify the artificial feel, but it sure as heck isn’t as precise as what I’ve sampled in other Bavarian-built sports coupes. Could this be BMW’s way of further enforcing the 4-Series’ grand tourer pretentions?

Not sure, but there’s no denying that this 4-Series now focuses on enveloping its passengers in a cocooning experience rather than connecting its driver to the road. And in typical BMW fashion, the 4-Series excels at providing a full array of customization options to its driver, from BMW’s fully digital gauge pod, to the always pleasant and intuitive iDrive infotainment interface. The M440i’s drivetrain is also immensely efficient, even with this much performance on tap. Activate its thriftiest EcoPro setting, and it’ll happily return fuel consumption averages that are below 10L/100 km.

That all being said, there’s no denying that the end product is very well executed, all while allowing the 4-Series to finally stand tall as its own bespoke model.

Back to that new grille: while I absolutely hated it when it was first released, I can’t help but admire BMW for taking such a risk. As the saying goes: regardless if you speak about it positively or negatively, what counts at the end of the day is that people are talking about your product. And folks love yapping away about how they feel about this new face. Perhaps this is the result of marketing genius from BMW? Only time will tell us if this new styling direction was a hit or a miss.