For decades, Toyota's Corolla has been synonymous with efficient, economical, and, with a few notable exceptions over the years, dull. But suddenly, Toyota no longer wants to be dull. In an era of electrification, driver aids, and the ever-looming threat of autonomous vehicles, Toyota has decided that it wants to appeal to folks who want to engage with their compact commuter. It's a noble goal for the often staid brand, but can they pull it off? More importantly, can they pull it off without losing the efficient and economical labels that have made the Corolla what it is today?

The 2020 Corolla sedan starts with styling that is definitely far from boring. Is it handsome? No, but that's not really part of the package for compact sedans like this one. The goal these days seems to be styling that's interesting at any cost. Do anything to avoid dull. Just look at Honda's latest Civic for what might be the best example of that. The Corolla's got an almost insect look to it, especially the pointed nose and sharply angled headlights. It's not a dramatic departure from the last model, and it's still clearly a Corolla to anyone who has seen one in the last 15 years, but there's no way you're going to confuse this one with the previous generation.

That styling sits on a new chassis, Toyota's TNGA architecture that now underpins everything from this Corolla to the Camry and Avalon, and even the RAV4. It's that flexibility that gave Toyota the ability to make a hybrid version of this car. It's a platform that Toyota, when it revealed it along with the current Camry, said was designed for handling. For drivers. For being connected to the road, though they definitely didn't call it grounded to the ground this time. Lesson learned.

Toyota has developed some amazing engines over the years, and though their performance models, like the Supra, have gotten some of the best, their economy cars haven't been left out. Engines like the 4AGE from the last rear-drive 'Rolla of the early 1980s, or the Yamaha-helped 2ZZ-GEs that also powered models from Lotus and gave the Corolla a stratospheric redline of 8,200 rpm. 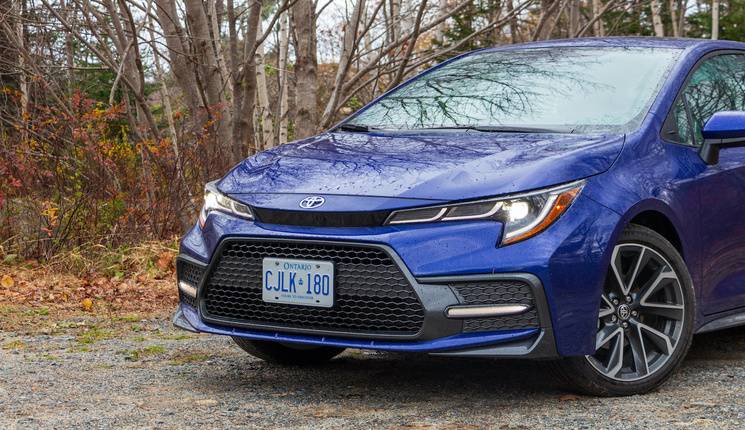 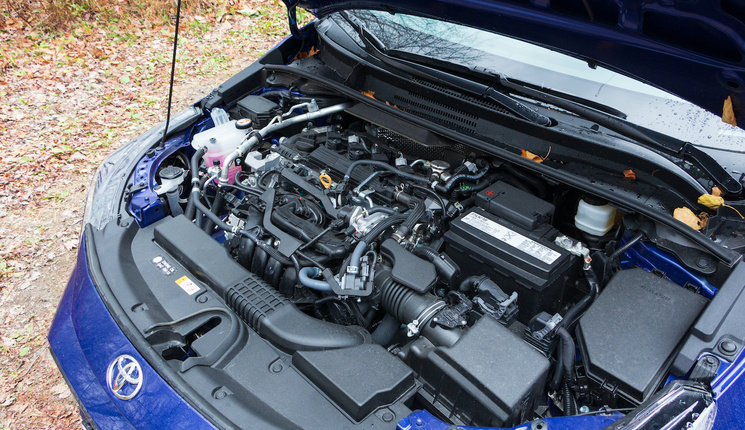 SE Corollas get a 2.0L engine Toyota's dubbed Dynamic Force, that's bigger and more powerful than the 1.8L on the L line cars. With a name like this one's got, you'd expect loads of power. But the engine delivers just 169 hp and 151 lb-ft of torque. Maybe that number doesn't look out of place but it's how it delivers the power that matters.

Coupled to the six-speed manual, this engine is going to get a workout. It's quiet in normal driving, and still keeps most of its refinement as you run it to redline, but you're going to need to run this one to redline more often than you might expect from a sedan wearing the Corolla badge. Despite the power figure, we're talking downshifts to fourth gear on highway hills in order to maintain speed. Nothing much happens until north of 3,000 rpm, but even then there's not as much urgency as you'd expect from the figures. Don't mark this down as one of Toyota's great fours, and that lack of power isn't helped by the Corolla's curb weight that's about 200 kg more than some of its closest competitors. It is efficient, at least, returning rated fuel economy that's at the pointy end of the segment. 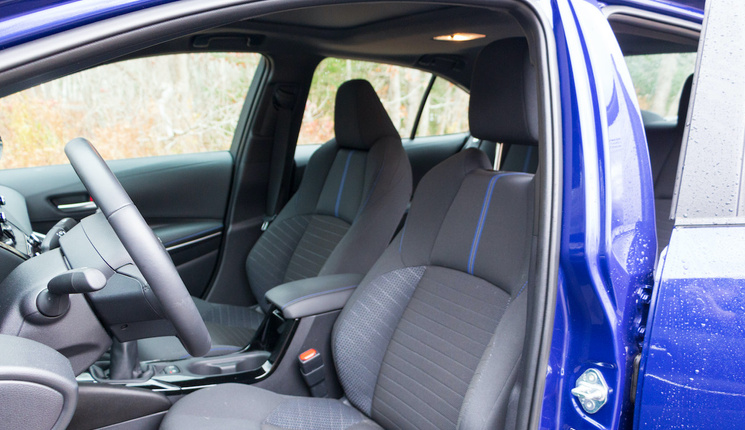 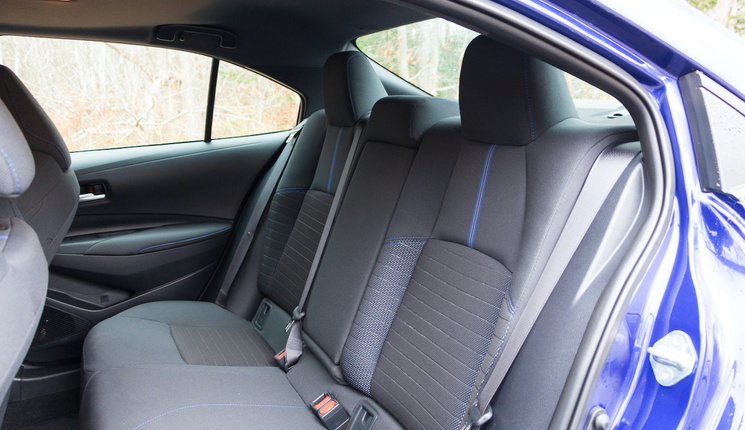 Thankfully, that six-speed is a joy, and it's really the highlight for me on the Corolla. Equipped with rev-matching that makes even my size 12 sneakers appear to be heel-and toe ballet slippers, the long shift lever and slightly vague travel brings back the fun of the stick. Yes, those throws are 1980s-long, but that's where the enjoyment comes. You need to muscle this long gear lever around, forcing it from cog to cog. If you're going to have to shift often, and you are here, it had dammed well better put a smile on your face just like this. If you don't like rev-matching, well, it is off by default each time you start the vehicle. So you'll be just fine too.

In the Corolla hatch, the chassis isn't exactly as fun as the gear changes, but it is playful. Good damping and geometry mean that the rear end can come into play if you would like it to. In the sedan, though, that rear end is decidedly planted. If you're looking for fun to drive in this segment, the Corolla sedan falls short of the best. That said, it rides well, even with the tiny sidewalls on large wheels. The steering is highly boosted, enough that, like in other Toyotas, you're probably going to bang hard off the steering stops with a nasty clunk during any parking lot manoeuvres. There's not much in the way of feel, either, though in a compact sedan you're not likely to find that anywhere. 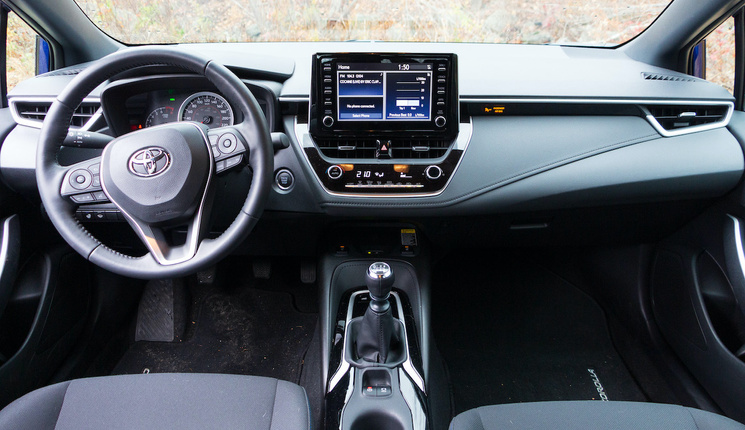 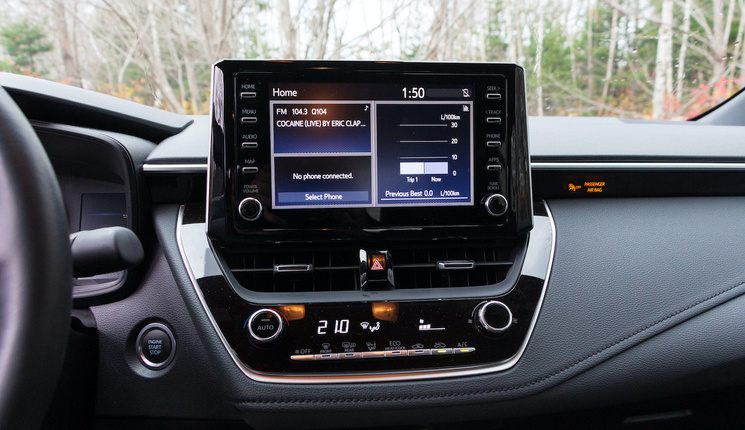 Check the spec sheets, and the Corolla looks as big as anything else in the class inside and out, but sit in the car and it's a different story. While most compacts now feel as big as mid-sizers did just a few generations ago, the Corolla still feels compact cramped inside. In height and width, in both the front and rear seats. If you're planning on transporting adult passengers here, you should bring everyone with you for a test fit before pulling the trigger. Driving the Corolla, for me, felt like wearing a shirt that was a size or two too small. Even for front passengers, the dashboard's protrusion into the passenger's space makes ingress and egress more of a challenge than the competition. The trunk's overall size is small, though its shape helps make the best of the space.

While tech is increasingly important in the compact car segment, the Corolla is lacking in some key features. If you've got an iPhone, you're covered. If you've got an Android phone, then you're going to be staring at a very prominently-mounted 8.0-inch screen that offers an interface that's not particularly eye-pleasing. Especially if you don't have navigation to let you see a map instead. Big points to Toyota, though, for a heated wheel button and heated seat buttons that are switches instead of an on/off/high/low button. That means they stay on the setting you put them on, no matter how many times you turn the car on and off. Thank you, Toyota, for hitting a beat that so many automakers miss on their heated offerings. 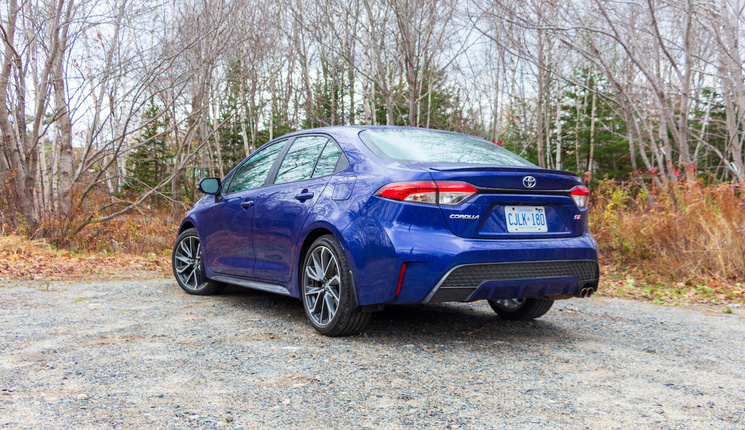 Toyota has gone all-out on the active safety features across the board, and the Corolla is no different from its larger siblings. Pre-collision with pedestrian and cycle detection, automatic high beam, lane departure alerts with steering assists, and radar cruise control are all standard on every Corolla. Higher trims add blind-spot monitoring, lane tracing, and makes the radar cruise full-speeds. They all work seamlessly, which should be taken for granted but isn't in some of the competition.

This latest Corolla feels well built, and it's as solid as a Corolla should be, which is good because that's one of the things that can suffer when automakers decide to chase sporty. Make it handle well, and maybe the driver doesn't care about that rattle or the tire noise. Not so here.

Efficient, economical, and dull? Two out of the three, at least. The Corolla is definitely still efficient, and there's no arguing that it's going to be economical both at purchase and down the road, those were never likely to be in jeopardy with this or any redesign of this model. As far as dull, well, there's more fun to be had here than in any Corolla sedan since the XRS models that went away back in 2006. If you really want to have fun, though, take the hatch instead. If you want sensible, get the sedan. Unless you're a large person with an Android phone. Then get a Forte.