From an overall value perspective, this SUV gives you an impressive amount of technology and options for its roughly $40k price point.

Why thank you, 2020 Nissan Rogue…thank you for being there to replace the cancelled Air Canada flight that was supposed to be the vehicle that whisked the family and I down south for a few days of Florida sunshine and R&R. Instead, Nissan’s best-selling vehicle and not-so-compact SUV ended up taking the four of us up north to a family cottage for a few days instead, kicking off three weeks of social distancing with three days of snowy cottage life with one full-blown teenager and one (barely) pre-teen.

Both of them very used to self-isolation, socializing on screens and heavy sleep patterns – they were seemingly born for this.

Packing a long weekend’s worth of food, gear and toiletries, there was still plenty of storage space left in the cargo area of the Rogue, while still being able to see out the rear window easily. Most of this extra space was filled up with the large bag of recycling we packed in there for our return, and still with a clear view out, but with more strategic packing involved.

A full week’s worth of gear likely would have either mastered one’s PhD-level Tetris packing skills, or hampered the view out the rear, especially without a rear camera mirror as offered on various similarly priced GM crossovers now.


As we headed out in the Rogue, satellite stations set, onboard Wi-Fi inquired about from the rear seat and lamented for not being available even for the familiar 90 minute drive (teens remember), what soon hit me was the sheer number of Nissan Rogues we encountered on the drive – many of them black, like our tester. 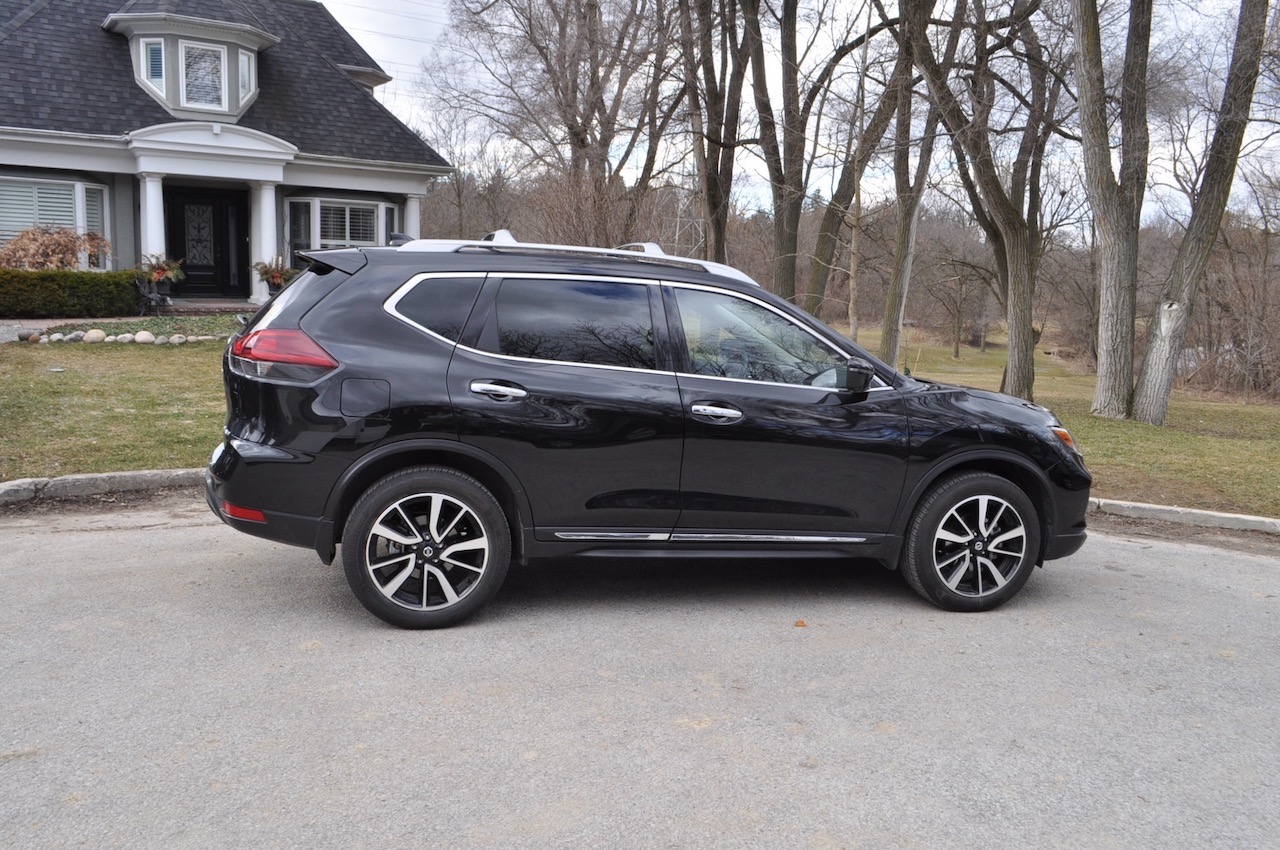 The Rogue has been Nissan’s best-selling model since 2012, but it wasn’t until I looked deeper into the overall Canadian sales charts for the past few years that I realized just how popular the Rogue has become: outside of pickup trucks, the Rogue regularly lands amongst the 10 best-selling vehicles.

It’s also the second best-selling crossover/SUV so far in 2020 in this country among monthly reporting automakers (to the end of February), behind only its Toyota RAV4 rival, according to auto sales site www.goodcarbadcar.net.

Be ready to see your Rogue in parking lots, a lot


That’s ahead of the Honda CR-V and the Civic, both perennial sales powerhouses. It’s early in the year, but the Nissan Rogue seems set to have another very healthy sales year, despite the fact that this generation Rogue arrived back in 2014. Granted, it has received regular updates, but there have also been multiple reports that an all-new Rogue is set to hit the market by the end of this year. 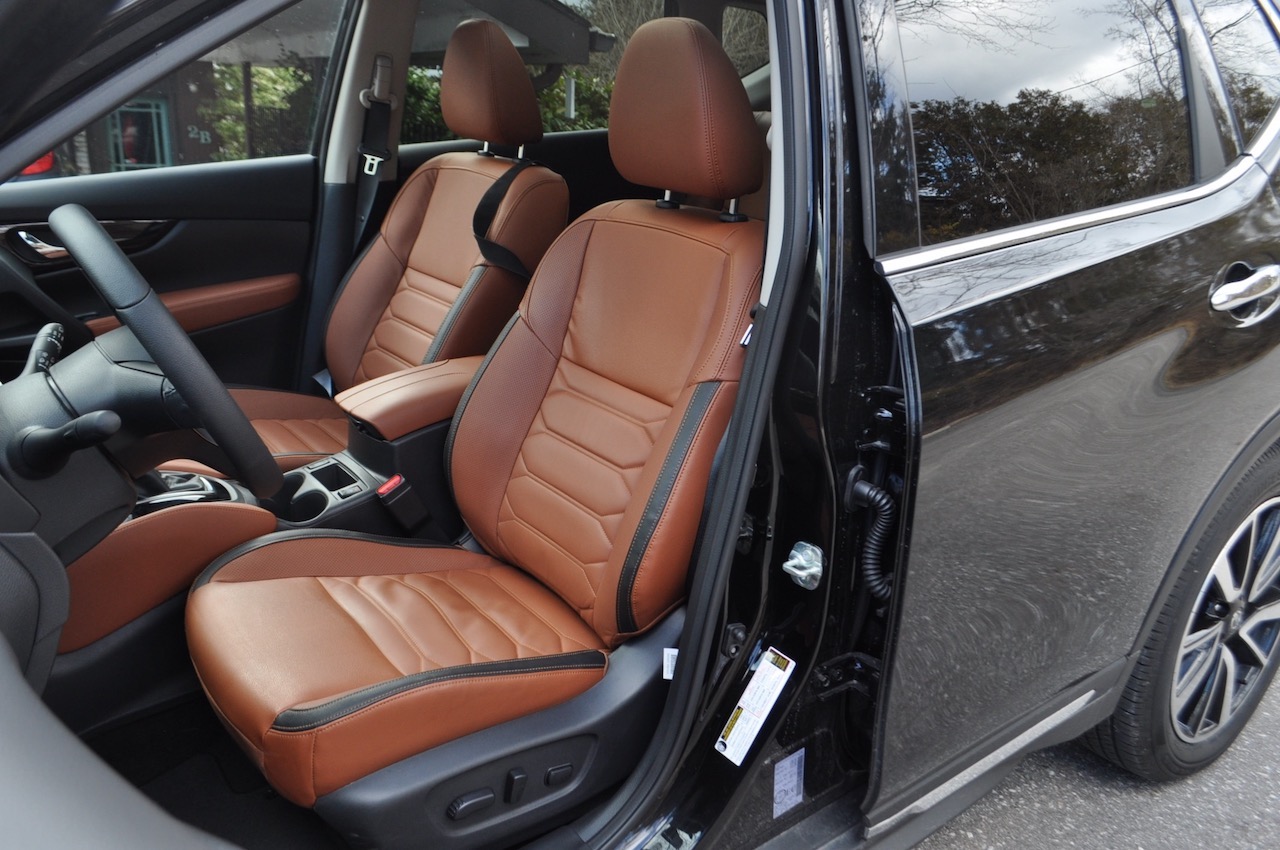 That’s not to say that the Rogue looks dated, necessarily; it looks fine, with its V-themed front grille providing a bit of Nissan-ness, but it becomes largely indistinct from other angles – plop a Toyota or Hyundai or Chevy badge on it, and you wouldn’t bat an eye.

But then, for which mainstream compact SUV is that not true? Just be prepared to see what you think is your Rogue but isn’t when you’re hunting for it in parking lots. A lot.

The active cruise control works well, slowing down gradually when approaching a vehicle in front, and more assertively when someone cuts into your lane, but doesn’t slam on the brakes. But you should if someone cuts you off, as the auto braking function needs the car in front to fully finish its lane change to slow down. 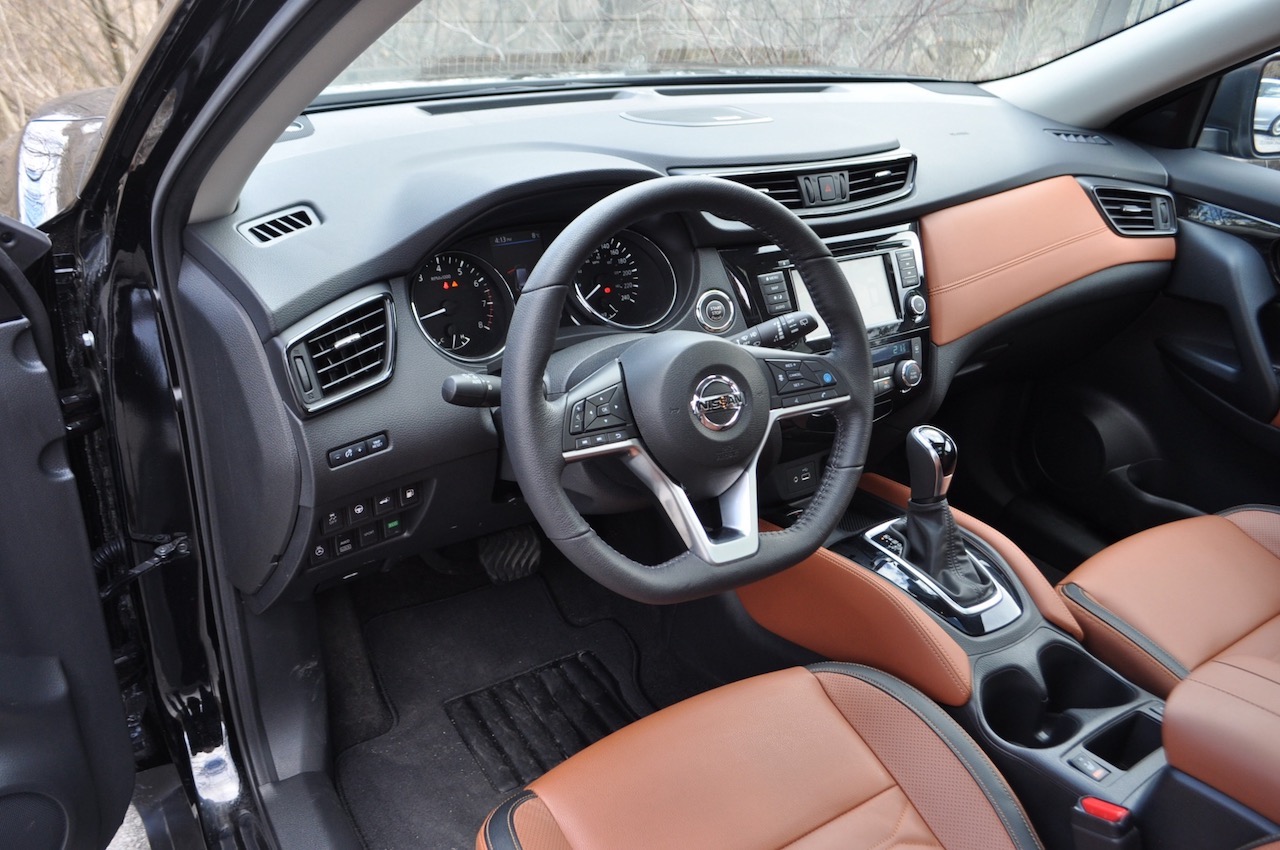 Nissan’s fairly advanced ProPilot Assist system also helps keep you centred in your lane, and can bring you to a full stop. It warns you to keep your hands on the wheel if you try to remove them, like most other auto-steer systems, but you definitely want them there regardless. As I’ve noticed on other Nissans, this system occasionally tracks into adjacent lanes unexpectedly, happening once during this week when an off-ramp to another highway meant the Rogue tried to follow the lane markings of the off-ramp instead of the current lane, which curved slightly to the left.

One downside to all this tech: this Rogue beeps at you incessantly, and not always for obvious reasons. Some of them are lane departure warnings, which can thankfully be turned off, but there was also a seemingly random single beep coming from the car with no accompanying indication as to why, or the imminent danger. After some research, seems most likely it was the blindspot warning system saying that there was a vehicle in my blind spot, but it didn’t always do this, so it was and remained a mystery beep for much of my week with it.

Like the lane departure warning, the BSW can be turned off, though as a valued safety item, I’d be more reluctant to do this, even with the random beeps.

Great practicality in other ways


Outside of the mystery beeps, there are plenty of driver and passenger-friendly features in the Rogue. In the rear cargo area, there’s a very handy shelf system that can be manipulated in a variety of ways, with different levels and adjustable floors. If your driveway’s like mine, with somewhat of an incline, any loose items back there may be a rollout risk in most SUVs after a grocery store run, unlike minivans, with their cargo wells. But the Rogue’s rear floor can actually be lifted up at an angle, providing a more secure barrier protecting against sliding grocery items.

Gaining access to that cargo area is also easy, even with your hands full, as a kick action under rear bumper allows for opening or closing of tailgate. That’s also very handy when the car is dirty, especially since the rear tailgate latch is just above the rear bumper, low enough to collect lots of road grime. 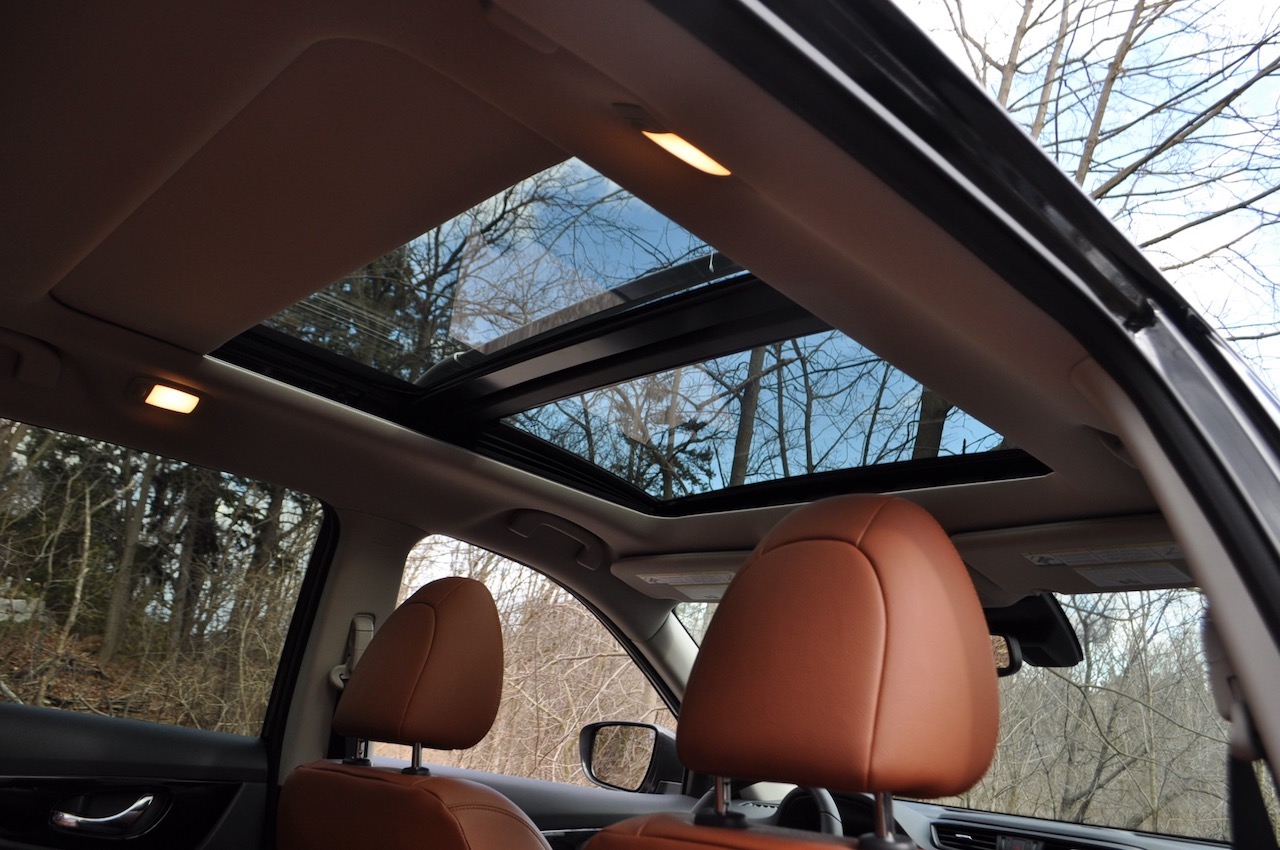 Another handy feature the Rogue shares with its corporate cousin Mitsubishi Outlander is a camera button located nice and prominently, which allows you to easily toggle between different views around the vehicle. The available 360-degree camera view in Reverse is great, but unfortunately that view disappears as soon as you put it in drive, annoyingly, unless you touch that high mounted camera button. A button which is also great for providing amusing display views to your kids in colourful car washes.


With a 170 hp inline-four under hood, there’s not a lot of oomph to start with in the Rogue, and the 2.5-litre’s 175 lb-ft of torque definitely felt more taxed when fully loaded with four people and lots of luggage. It clearly focused on providing a largely quiet overall experience, staying mostly unobtrusive until its cruise struggled to keep its set speed on the highway without its CVT audibly requesting a lower gear ratio. Even when empty, it was no firebreather, but competitive with most in the class.

Often times there’s a fuel consumption reward for a lack of instant oomph, but that wasn’t the case here either, unfortunately. It averaged 10.5 L/100 km during our week with it, but that was after about 300 km worth of highway driving with the family. It was notably worse in city driving prior to that, its official city figure of 9.6 L/100 km for Rogue all-wheel drive models seeming extremely optimistic, compared to the mid-11s to mid-teens I had seen come up on the dash up until our cottage trip. 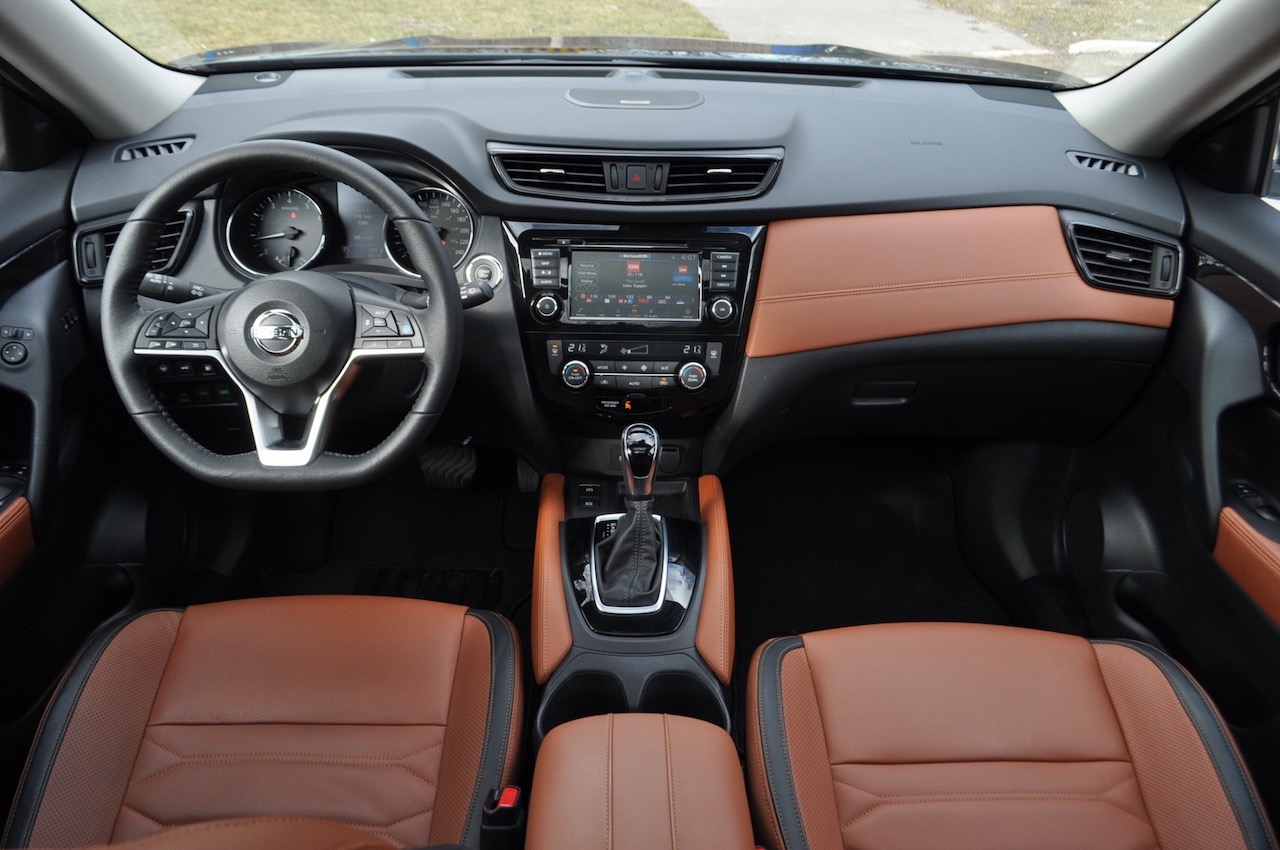 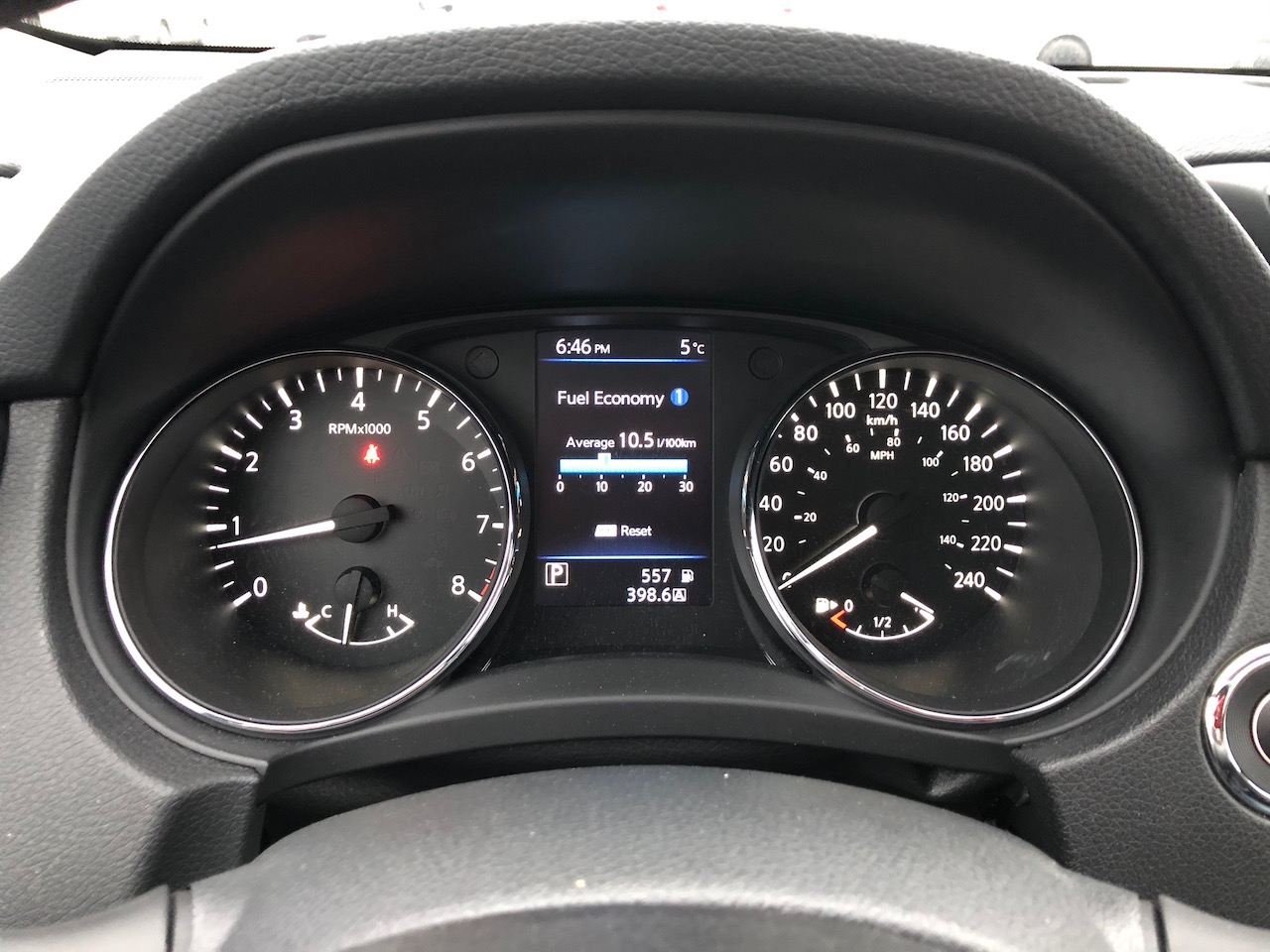 That said, $0.71/litre fuel in Ontario meant I was able to fill up the Rogue from a quarter full for just over $32 at a GTA no-name filling station. For the record, the Rogue AWD averages 8.7 L/100 km overall, according to Natural Resources Canada figures.

The Rogue also soaked up bumps relatively well, its handling never tempting the driver to attack those highway ramps, but also not so wishy-washy that the kids in back require anti-nausea meds. Its heated steering wheel, nice huge panoramic roof, plus heated two-tone leather seats are all part of a nicely upscale interior environment, with Apple CarPlay and Android Auto standard on all models.

Value is high, especially with deals


Even using Nissan’s infotainment system, the Rogue understands voice commands fairly well, with an audio system that can be easily set up with presets from each band, but unlike other newer systems, don’t expect to mix in your FM with AM or satellite radio presets. 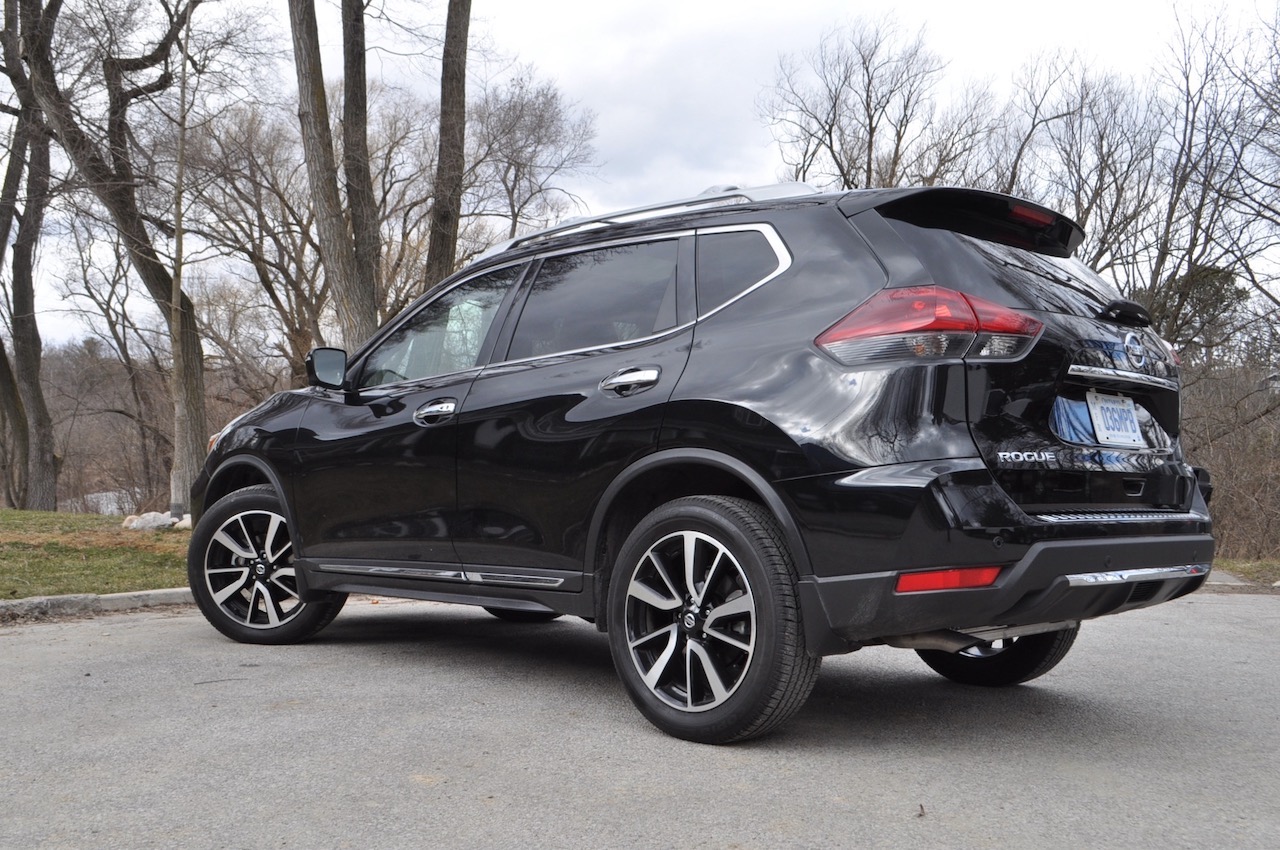 From an overall value perspective, this SUV gives you an impressive amount of technology and options for its roughly $40k price point. There are many pricier SUVs that don’t provide nearly this amount of room, tech or comfort for the price, even if the powertrain is less refined or efficient than the best in this class.

Wise buyers may wish to wait until closer to the 2021 Rogue’s market launch for the truly outstanding deals, or to see how the next-gen model ups the ante with its design and powertrain(s), but there’s lots of family value here that can be appreciated now, no matter the distance to that launch.