Even today, three years after it debuted in North America for the 2017 model year, the Nissan Qashqai still finds itself in a slightly awkward space, sharing the air (and sales) with the Rogue crossover, a car that’s not that much bigger than it. But the Rogue gets a bigger engine and has a massive following and sales record.

It doesn’t really help that the Qashqai’s called the Rogue Sport in the US, which further muddies the waters between these two vehicles. Add the arrival about two years later of the Kicks subcompact CUV, and the confusion continues.

Well, we’re here to try to add some clarity to the situation because as it turns out, the Qashqai is a very competent, capable and even cool vehicle that should not be overlooked.

And – as unexciting as it may sound – it starts with the price. With a base price of $21,498, the Qashqai undercuts the Rogue by a clean six grand, yet only costs about two grand more than a base Kicks. What do you sacrifice for the savings? Well, there’s a little less room up front, a little less in back (unless we’re talking rear headroom, which is about equal) ad 40 per cent less storage when the rear seats are up. The Qashqai also makes do with a 2.0L four-banger as opposed to the 2.5L found in the Rogue, costing the Qashqai 30 hp and 30 lb-ft of torque, totalling 149 hp and 141 lb-ft. “Ouch”, right? Not really, as you’ll see in just a minute. 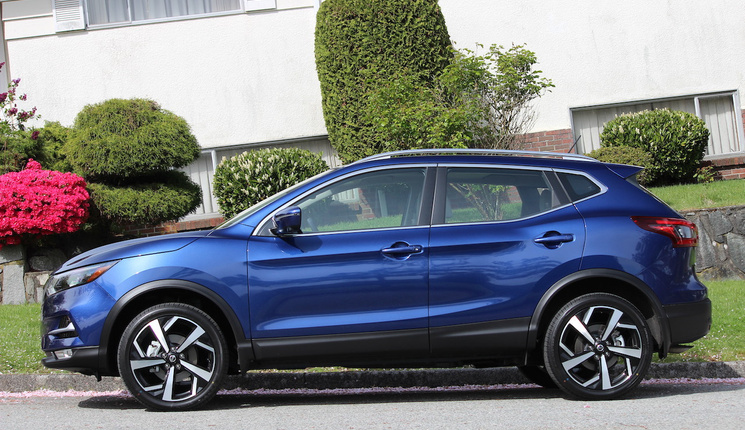 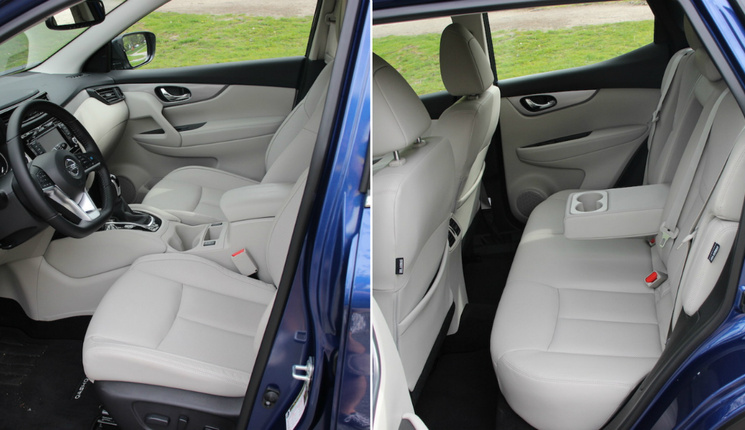 What you get with the Qashqai, though, is a more athletic-looking vehicle, all wide, squat and bulldoggish. It also comes in much brighter colours with names like Nitro Lime and Monarch Orange and Caspian Blue, as seen here. Those colours are reserved for the top four trims, but the actual colours outnumber the available shades of greys and blacks that are oh-so common in the compact CUV world.

Inside, it’s an airy affair and the Qashqai does a good job of making use of the space it has. The rear seats fold flat without having to remove the headrests even if the front seats sit far back on their rails. The central storage bin and glovebox are deep and the rear cargo area gets a nifty modifiable floor that helps keep items in place as you drive. It also allows for some underfloor storage for thinner items.

You also get Zero Gravity seats that are clad in real leather on the top SL trim seen here and they offer good lumbar and torso support. The predominantly white environs (it’s officially called “light grey” – I don’t think so, but I’ll let you look at the photos and decide for yourselves) in my tester make it seem even roomier inside, though I do worry – like I always do with interiors that are this white – how it will wear over time, how denim may stain it and so on.

It's not all perfect; there’s really no place to properly store your mobile device as the slot just ahead of the central storage bin is a little shallow. There is a flat area at the base of the centre stack, but it’s square-shaped which means storing a rectangular mobile device there (or a wallet, or glasses case) is not really possible. Couldn’t they have found a way to get a rectangular surface there? The Sentra has one that’s perfect, and it’s a little compact sedan. That means I needed to waste a cupholder to store my phone, which is kind of annoying. Especially considering that the cupholders are nice and deep, keeping your beverage stored out of the way when it comes to changing gears or resting your arm. 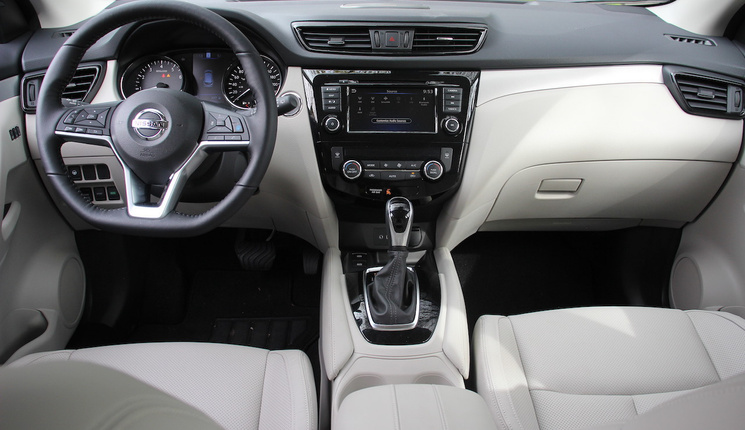 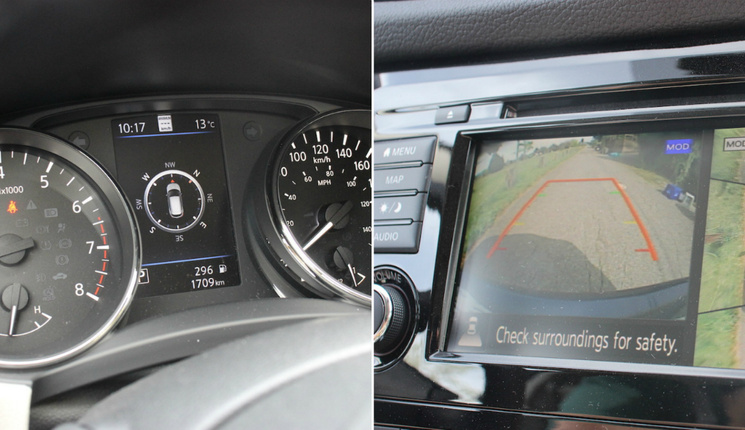 It’s also a somewhat tame styling exercise overall – the gauge fonts are clear but somewhat boring-looking and the centre stack is not all that adventurous on the styling front – which is a stark contrast to the exterior colours and my tester’s utterly fantastic 18” wheels. You’ll want those; they don’t hurt the ride and the Qashqai looks a little gawky with the 17 inchers that come as standard.

As mentioned before: the Qashqai is about 30 units down on the Rogue in terms of both torque and hp, but obviously no one’s told the Qashqai that it’s less powerful than its (not that much) bigger sibling. Even with the continuously variable transmission (CVT) it has – hardly the gold standard when it comes to brisk acceleration and driver engagement – the Qashqai leaves the line with something just below what I’d call “gumption”. It’s zippy enough, making full use of the power it has and managing to almost – almost­ ­– make me forget it’s mated to a CVT. That memory comes flooding back when the telltale CVT whine takes front and centre. At least there’s a “manual” mode that lets you manipulate the virtual ratios yourself. There are paddle shifters but I wouldn’t use them for much more than a little extra powertrain control when on a gravel road or in other adverse conditions, but at least they are there, which is more than can be said for the Qashqai’s smaller Kicks sibling.

Where the Qashqai drive experience really shines, though, is when it comes to ride and handling. This is a CUV that with its shortened wheelbase and somewhat tall roofline should jitterbug all over the place as the road surface starts to degrade, but it doesn’t. There’s enough of an off-centre deadzone felt through the square-bottom wheel that you aren’t constantly adjusting to keep it tracking true on long, straight highway jaunts and the steering feel (and driver) are well insulated from harsher bumps. 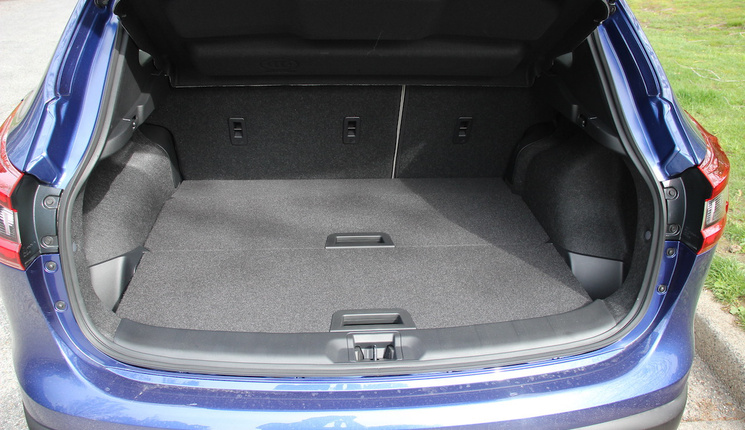 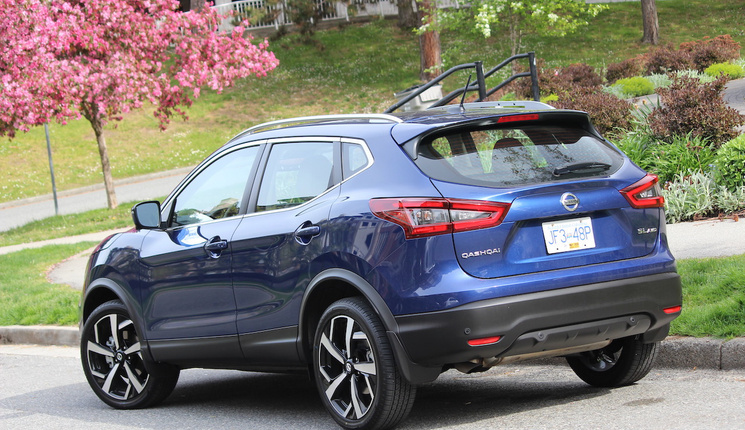 Which is nice, especially when you consider that even though dampers haven’t been tightened to within an inch of their lives, body roll is kept mostly in check and the turn-in once you get past that deadzone is spot-on. This is an easy little trucklet to thread through the tight urban jungle or with which to tackle some windier backroads. It speaks to the Qashqai being aimed at a buying group that likes the bargain pricing, but also likes a vehicle that’s just a little more fun to drive than the Rogue that their mom, their dad, their barber and their barber’s dog breeder own.

Which, I think, is where amongst all the chaos that is Nissan’s six-model Canadian SUV/CUV line-up, the Qashqai comes clearly into focus. It is such an easy trucklet to like, partly because it does so many little things well, but also because it walks the line between practicality and cool better than anything else in the line-up. Yeah, the Rogue is very good, has more room and sells in droves, but I’ll take my more affordable Qashqai and get me a roof box, thank you very much.