Join the Conversation (0)
The Mercedes-Benz GLS sits at the very top of the Mercedes-Benz SUV lineup. Stickering in at a $95,500 base price and stretching its wings well over $135,000 with options, it’s the most expensive utility vehicle Mercedes currently sells, after the almighty G-Wagen, of course.

It’s now all-new for the 2020 model year, riding on a re-engineered platform, filled with state-of-the art technology and powered by all-new engines. It also looks more in tune with the rest of the Mercedes line up thanks to the brand’s new corporate face, appearing more carlike and refined, like a stretched and widened GLE.

On paper, these changes should help the big boy GLS catch up to a segment that has recently modernized its fleet. Lincoln updated its Navigator while Cadillac has just dished out a fully revamped Escalade. Plus, there’s a new German kid on the block called the BMW X7, a competitor Mercedes-Benz absolutely needs to beat.

Even though it doesn’t ride on a body on frame configuration like the Lincoln or the Caddy, the GLS remains an appealing vehicle for high-income families desiring a three-row SUV that can also tow the jetboat over the weekend. 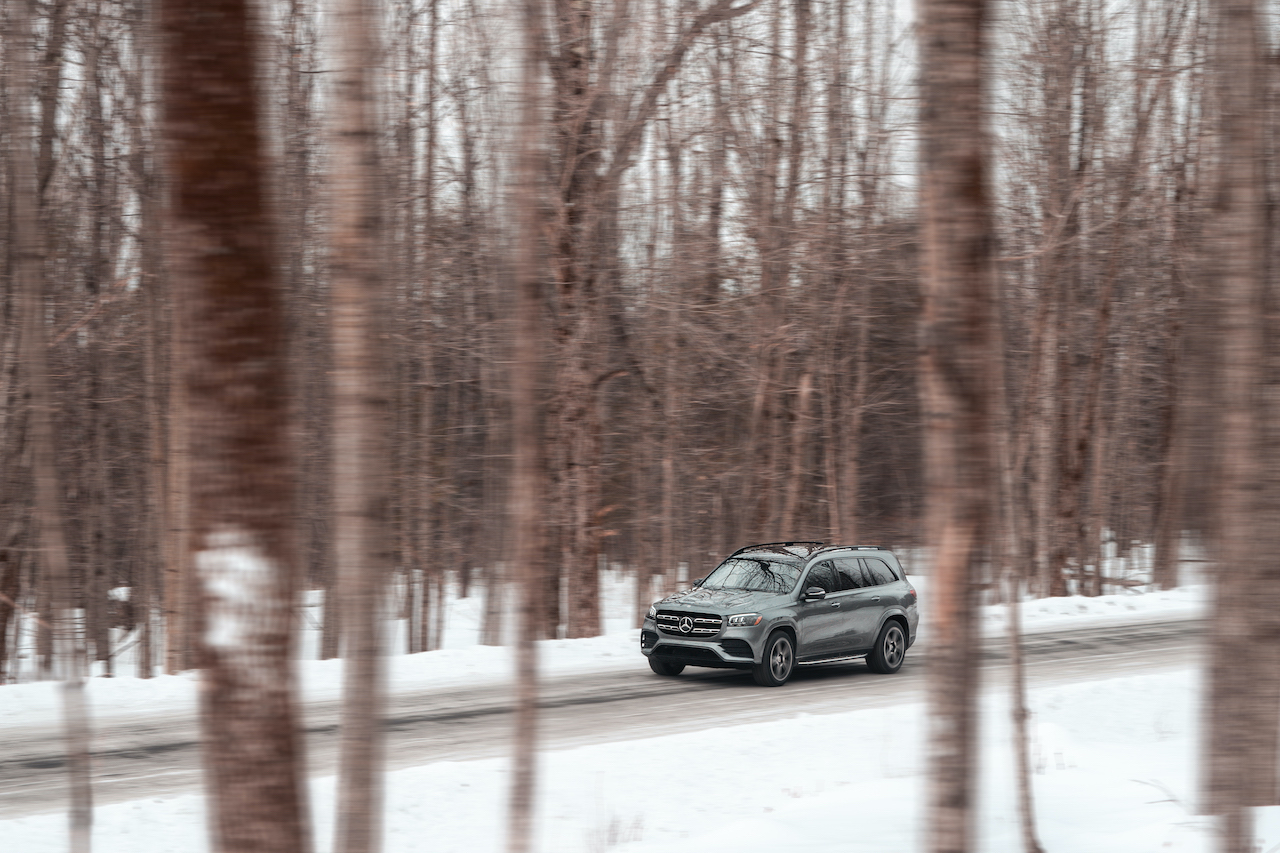 Our tester was the GLS 450, the bread-and-butter “entry level” GLS powered by Mercedes’ ubiquitous 3.0-liter turbocharged straight six, the same engine that also powers the E and S Class sedans, as well as the GLE midsize SUV. It comes standard with Mercedes’ latest 48-volt mild hybrid system, known internally as EQ Boost. Power is rated at 362 horsepower and 369 lb-ft of torque.

4MATIC all-wheel drive comes standard across the range, as well as a nine-speed automatic gearbox. Our test unit was equipped with some optional packages such as a $5,100 Premium Package and $3,400 Night Package, just to name a few, for a final MSRP of $108,190.

The immediate standout quality of the 2020 Mercedes-Benz GLS 450 is how smooth the entire rig feels when driven over damaged pavement. When set to Comfort mode, its adaptive suspension soaks up the potholes and its rock-like structure takes the hits so your spine doesn’t have to, making for a supremely smooth driving experience – better even than its main German rival.

The drivetrain is rather subtle as well. The mild hybrid system ensures smooth takeoffs and acts as a large start-stop system, so when the gasoline engine kicks in, transitions are significantly non-dramatic. When running full swing, the straight six is like velvet, providing a constant and steady delivery of power throughout its rev range. 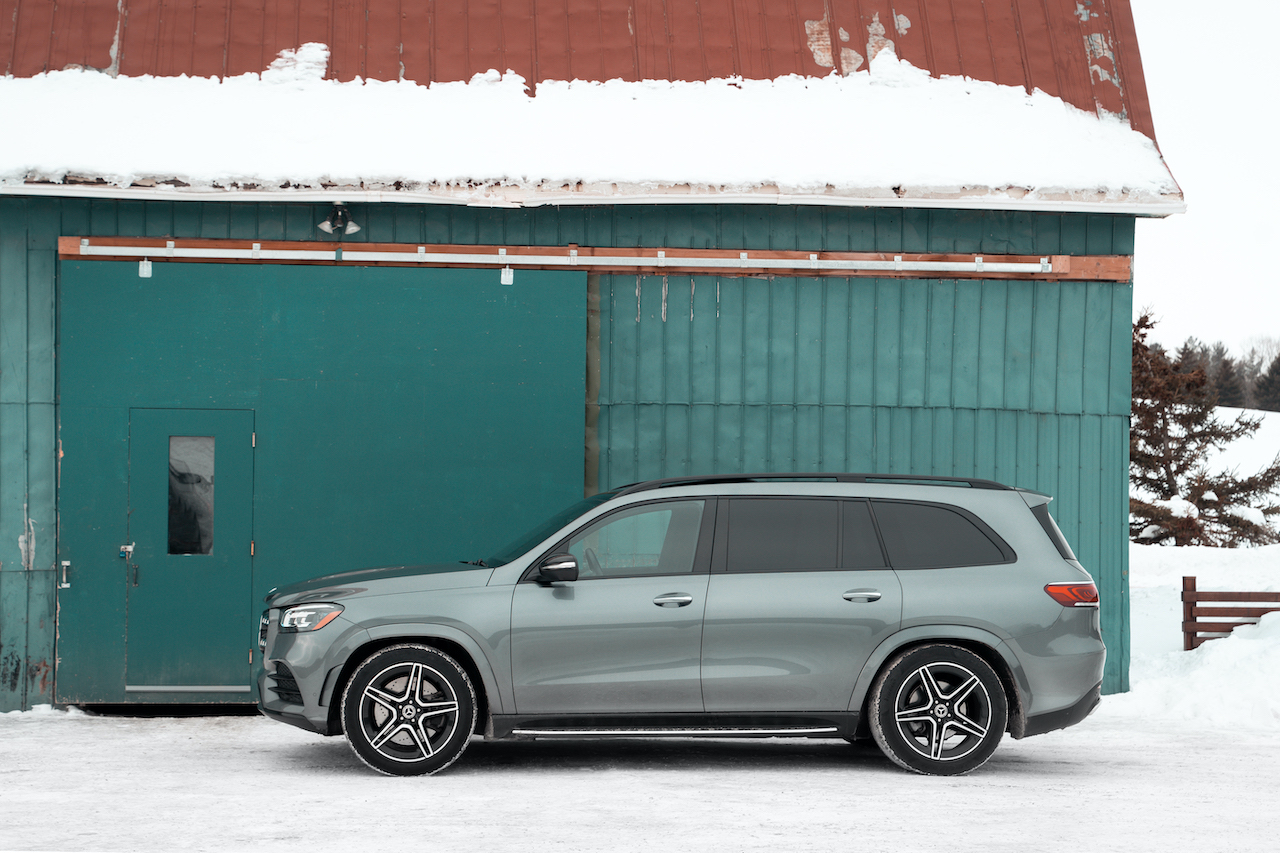 That said, acceleration times are not blisteringly quick in a GLS 450, so don’t expect to win any drag races in your family shuttle. Benz will sell you the V8-powered GLS 580 to suit your fancy.

Instead, this GLS 450’s acceleration is more like that of a train, taking a considerable amount of time to pick up speed, but when it does, it charges forward with a steady forward thrust. Performance is therefore lackluster, but the drivetrain at least works well, and the automatic gearbox drops gears in a clean and efficient manner.

It's also surprisingly rewarding to drive on a winding road. While big and heavy, body roll is well controlled and progressive, with precise and quick-reacting steering.

Inside, the GLS 450 is all Benz, which means its interior is filled with high quality materials and impeccable fit and finish. Front seats offer a tremendous amount of adjustments for optimal comfort. They’re some of the most supportive massaging seats we’ve seen this side of Rolls-Royce.

However, entering those seats if you’re over six feet tall might mean you’ll bump your head on the A pillar. I’m not kidding. No matter how I adjusted the bench before climbing inside, I had to duck my head before strapping myself behind the driver’s seat.

The seats out back are just as, if not more, comfortable than in the front with a wide variety of adjustments, heating, and ventilation, as well as independent HVAC controls for superior comfort. 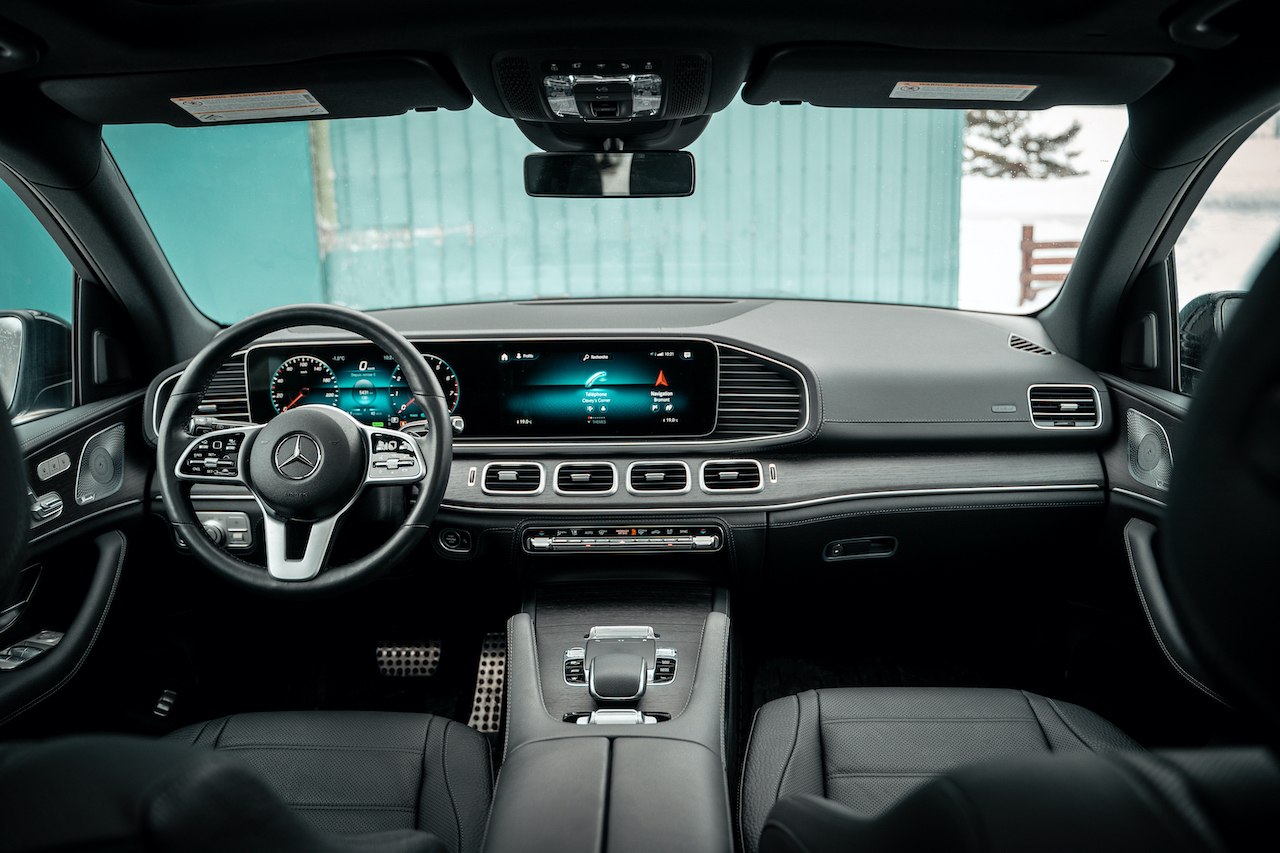 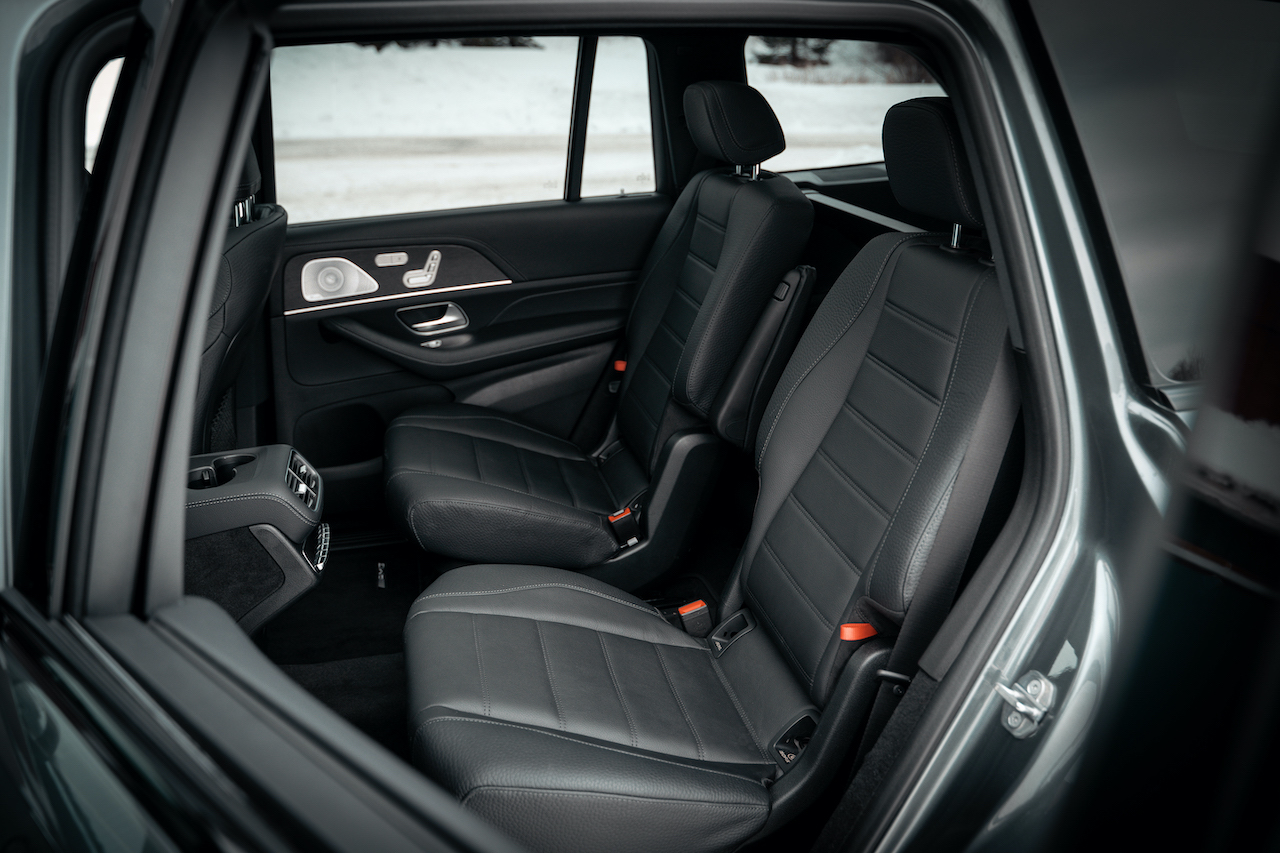 We were however disappointed by the GLS’ third-row seating. While it’s a large vehicle from the outside, we found access to the third row to be difficult and cramped. We therefore recommend reserving that third row for kids. The good news, however, is that a GLS is still more spacious than an X7 in the rear, so there’s that.

Cargo space was also a bit of a letdown. Fold all seats flat by way of electronic controls, and the GLS will engulf 2,400 litres of your gear, making it a smaller overall SUV than an X7 (2,559 liters) and all its American rivals.

Then, there’s the amount of technology this latest GLS was crammed with. To nobody’s surprise, this Benz gets all the latest semi-autonomous safety toys, which to their defense, work impeccably well, especially in stop and go traffic.

The GLS will alter its driving dynamics based on four different drive modes: Comfort, Sport, Eco and Offroad, with the later lifting the vehicle’s suspension so it can better take on rough terrain, all while remapping the transmission and reconfiguring the traction control system for optimal traction.

The GLS will even lower its ride height automatically below 30 km/h in preparation for a passenger drop-off or pickup. It’ll even change lanes on its own on the highway without you having to touch the steering wheel. 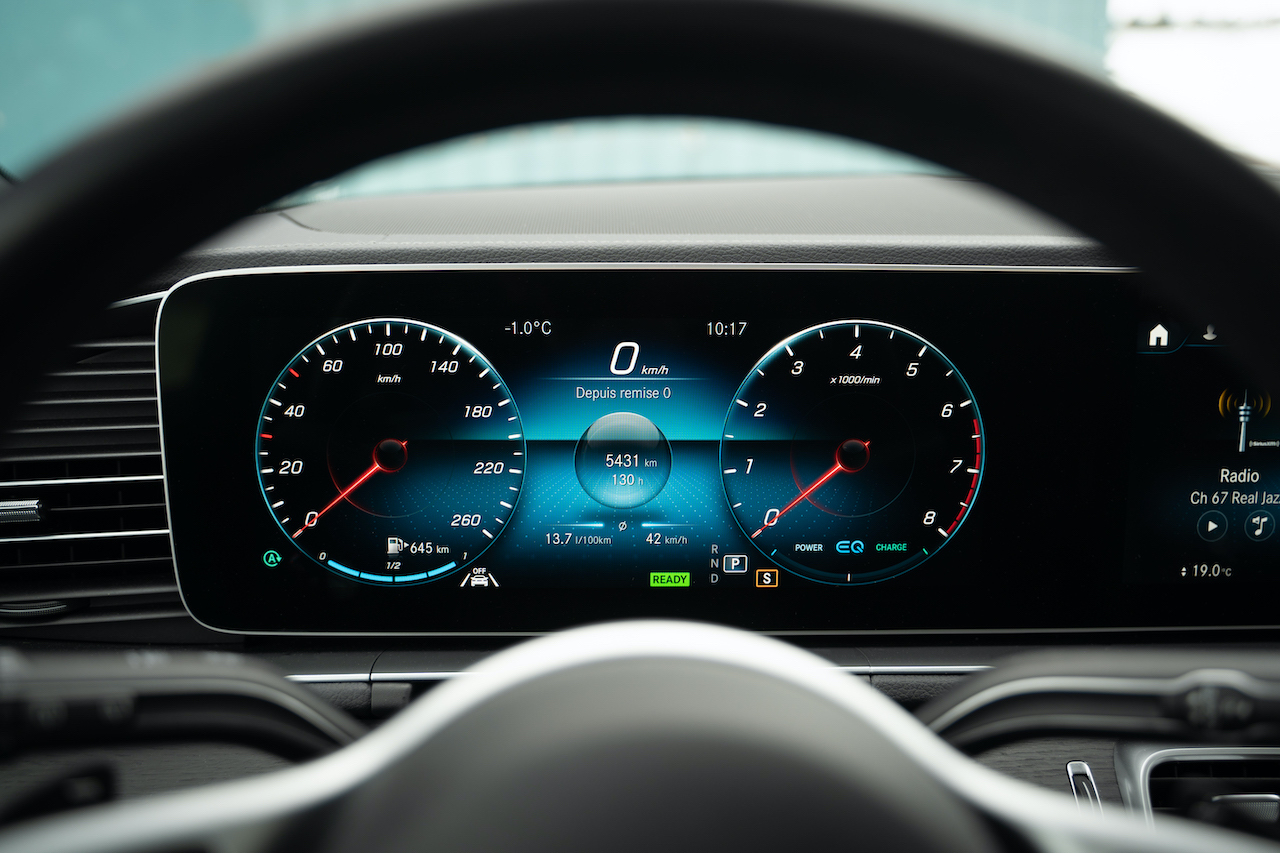 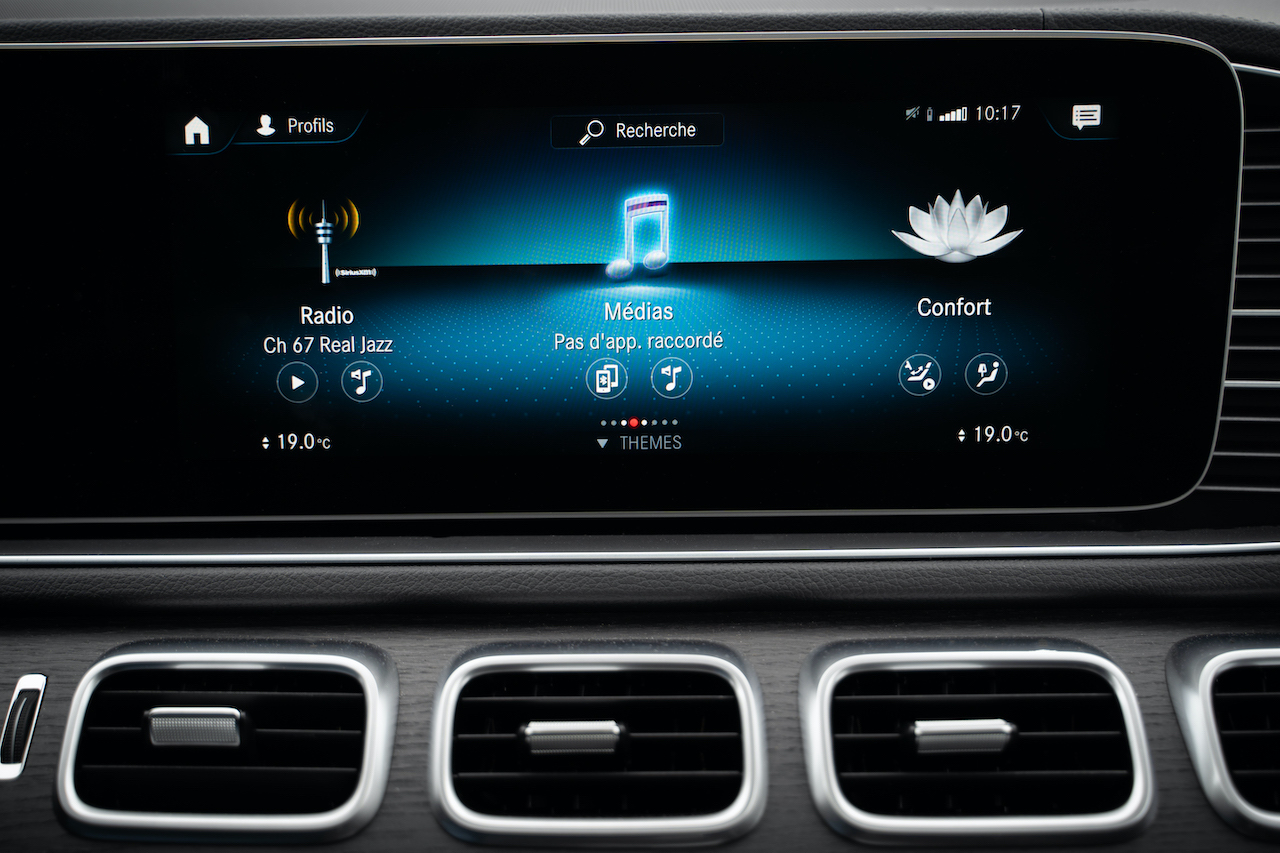 In Eco mode, this large SUV proved immensely frugal given its size and weight, easily pulling a 11L/100 km average during winter, besting both a Navigator and an Escalade.

Finally, Mercedes’ MBUX infotainment system remains both a technological tour de force and an ergonomic mess. We appreciate the system’s wide range of functionalities, all commandable via voice prompt. And the system does a good enough job of understanding complex vocal commands.

By way of the “Hey Mercedes” command, one can find the nearest coffee shop, ask for the weather forecast, tilt the sunroof, or lower cabin temperature.

But simple physical commands, like changing radio stations or turning off the vehicle’s furiously intrusive proximity sensors – which turn themselves back on automatically anyway – require fiddling within the system via a distracting touch pad. Granted, it all responds quickly, but the number of steps involved in the process mean you’re not keeping your eyes on the road.

In conclusion, the 2020 Mercedes-Benz GLS is finally a modern, frugal, and capable three-row SUV that can finally be considered over a Cadillac Escalade. In that respect, Mercedes has done its homework all while delivering a solid rival to the also-new BMW X7. 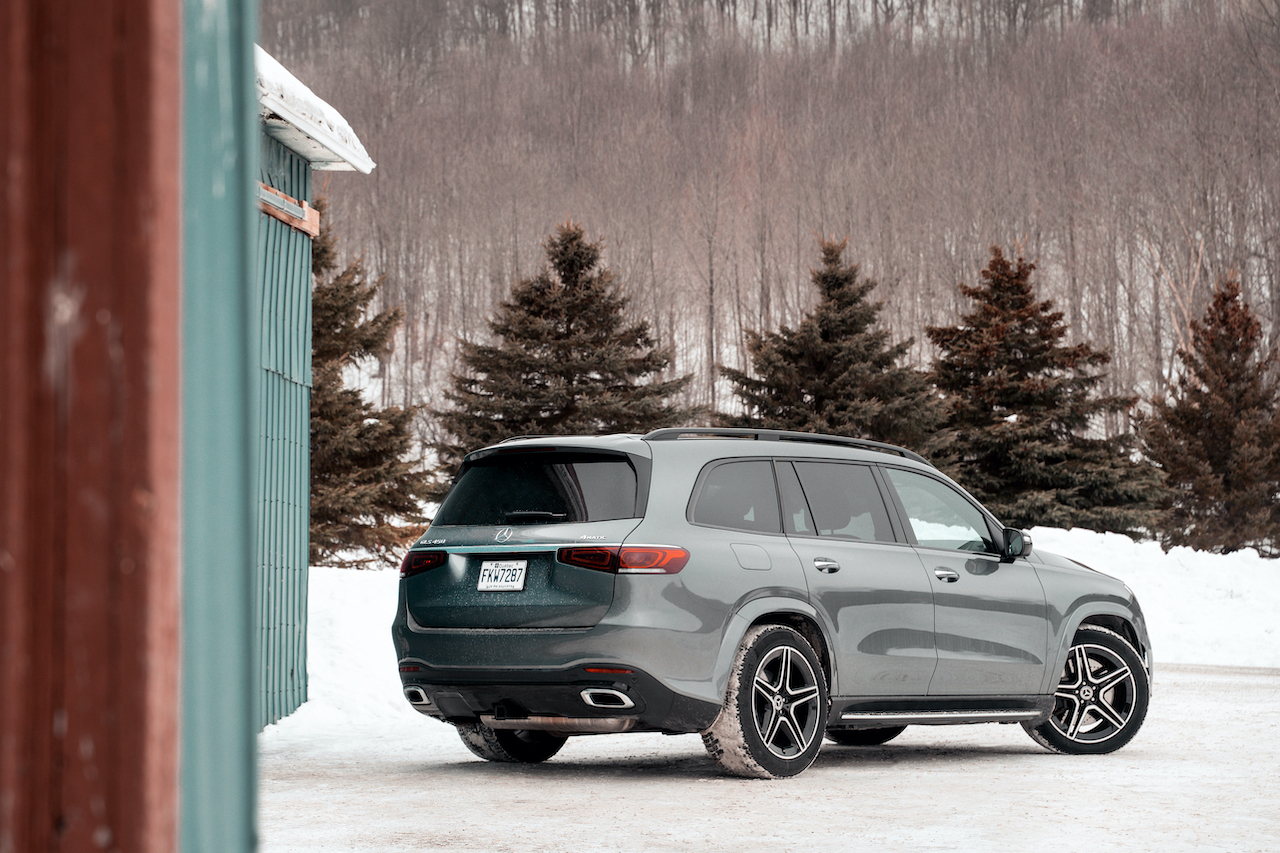 As a matter of fact, we’ll be pitting these two in a full-on comparison test shortly, so stay tuned.

As a whole, however, we need to say the following: with target consumers mainly seeking cabin space and truck-like capability from their big-rig luxury SUVs, the not-so-big inside and not-that-powerful GLS 450 could force some potential customers to opt for a (standard) V8-powered Caddy instead.

The 2020 Mercedes-Benz GLS is therefore reserved for a special kind of consumer who absolutely wants their large luxury SUV to be a Benz.