If you’ve ever visited the website Trip Advisor you’ll be familiar with the challenge of sorting through all the reviews trying to narrow down your choice of restaurant, hotel, or vacation destination. Doing this within one lifetime is about as difficult as leaving the house with a toddler during a snowstorm.

There are some amazing products and services out there but with so much to pick from, decisions have never been harder. The world of the compact premium crossover is largely the same. For growing families with a bit of extra cash to spend on their transportation, the sheer volume of entries in this segment can make choosing one a lesson in frustration.

Cadillac has seen its fair share of ups and downs, but in the last couple of years the addition of two new crossovers—XT4 and XT6—has strengthened their position in a market infatuated with trucklets. And with the redesigned Escalade scheduled for a reveal next month, their portfolio is only going to get stronger.

But has this left their best-selling XT5 sitting on the bleachers as the new blood gets all the attention?

Turns out the XT5 also received a bit of love for 2020 in the form of a sorely needed update.

The last time I drove one was in 2018, and while I liked its unique style, I felt it lacked standout features and interior quality and infotainment weren’t up to snuff. Then there were the expensive option packages and higher-level trims that pushed my tester’s price to the upper echelons of the segment where, quite frankly, it made little sense to recommend it over its rivals.

However, it was possible to spec one for a lot less money while still retaining most of the stuff that makes a premium vehicle premium.

For 2020, the XT5 improves in nearly all the areas that I drew issue with before. As far as mid-cycle refresh jobs go, this one has been given a thorough rethink.


The trim lines have been condensed and aligned with the rest of Cadillac’s offerings and the top-level Platinum model has been dropped, leaving just three lines: Luxury, Premium Luxury, and the range-topping Sport. That means you can choose to have an XT5 with a focus on comfort or you can have one that strikes more of a sportier chord. The availability of a Platinum option pack on either means that if you want sport and luxurious interior trappings together, you can do that too.

They’ve also added a new base engine, plucked from the smaller XT4. This 2-litre turbocharged 4-cylinder makes 237 hp and 258 lb-ft of torque and is standard on Luxury, and Premium Luxury trims. Sport trims get the carryover 3.6-litre naturally aspirated V6, and it still makes a healthy 310 hp. The V6 can also be equipped as an option on a Premium Luxury XT5 if you feel the extra oomph is necessary. 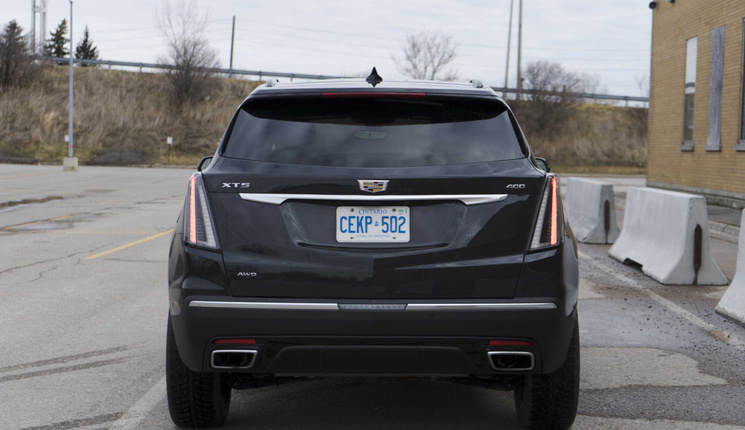 Apart from the new engine is the inclusion of more standard equipment across the line. Things like heated front seats, which should have never been an option on a luxury vehicle in the first place, LED headlamps, lane-keeping assist, forward collision alert, pedestrian alert, and seat alert. That last item vibrates the seat bottom rather than sounding a series of beeps to warn you of an impending collision with an object, pedestrian, or another vehicle. A sensation I never quite got used to.


You’re not really going to notice much of a change on the outside; there are new grille designs depending on what model you pick, and the lower fascias, front and rear have been tweaked slightly. Sport models get darkened trim, smoked taillight lenses, 20-inch wheels, and a moodier look versus more chrome and brightwork on the Luxury models.

The Sport trim I was driving also gets some chassis tweaks and a quicker steering ratio for added dynamism but it didn’t feel worlds apart from what I remember.

The XT5 is a good-looking crossover and I particularly like the foglights strips and slim headlamps that stretch back into the fenders, a design that’s also mirrored with the tail lamps. 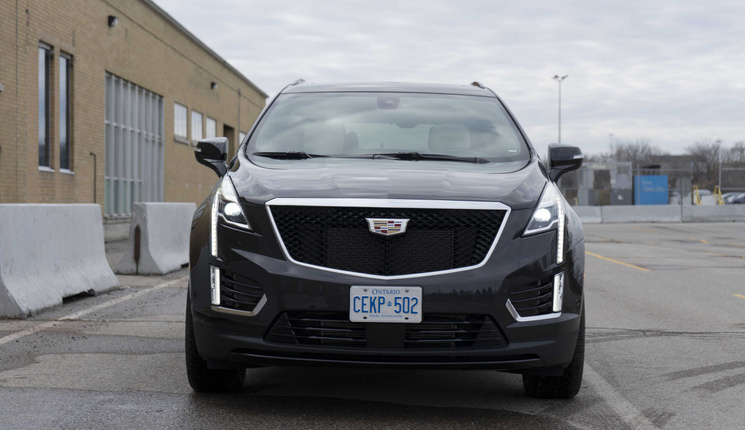 
While the exterior changes are subtle, the cabin is where most of the money was spent.

The last XT5 I was in had crooked stitching on the door panels and chintzy feeling door pockets that had mould lines present, something I hadn’t seen in any car, regardless of price, in a very long time. At best the quality of the materials and execution was inconsistent. Some areas felt nice and premium while others were a letdown. The CUE infotainment system, for example, and the infuriating touch slider to control stereo volume were ergonomic nightmares. Ditto the joystick-like electronic shifter that had to be pushed up and to the left to engage reverse.

Imagine my surprise when hopping into the 2020 XT5 to find each and every one of those complaints addressed. 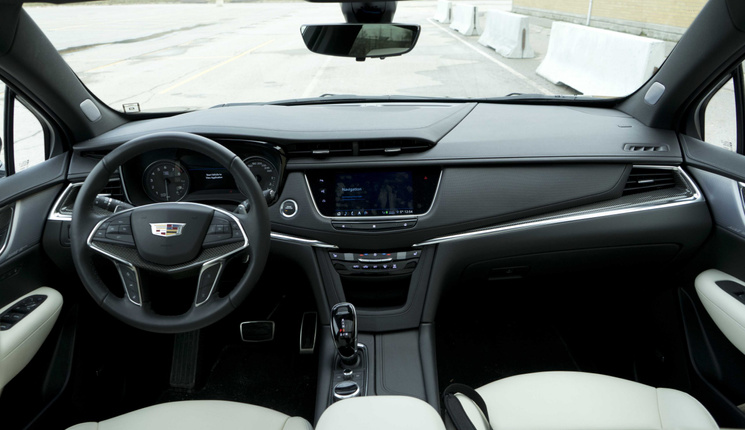 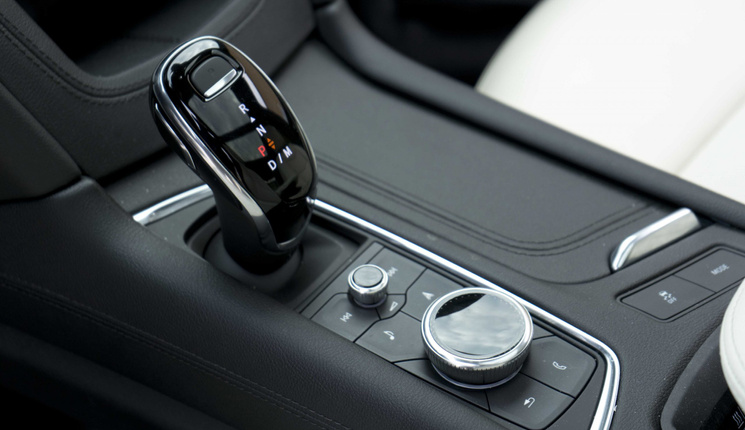 Using the latest version of GM’s infotainment system was an excellent move. The touch screen is of higher resolution and finally capacitive (like your phone) meaning it’s a hundred times more sensitive to touch, and the graphics are brighter and crisper. They’ve also added a rotary controller and a real volume knob, dumping that touch slider into the garbage bin of history where it belongs.

While the 8-inch screen might not be as large or feature-heavy as what you can get in a BMW X3 or Mercedes GLC, it’s ten times better than the systems found in the Lexus RX and Infiniti QX50, although navigation is still an optional extra across the board. But equipping it does get you the excellent 14-speaker Bose performance series audio system.

Materials and trim all felt worlds apart than I remember and that annoying shifter has been replaced. It’s very similar in feel and operation to what BMW has been using in their cars for years now and it works. There’s also the excellent rearview camera mirror, which at the flick of a switch turns the plain-old rearview mirror into a super-HD, wide-angle view of where you’ve just been. It might throw you off at first, but you get used to it quickly and it works well. The video feed is unobstructed, so passengers and cargo never get in the way. And to ensure the camera lens doesn't get caked in road grime, there’s a built-in washer that you can use to clean it off. 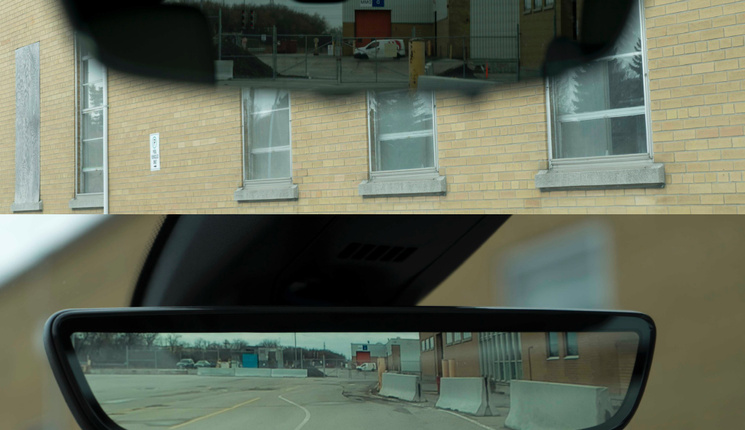 Just about the only place where I found this cabin lacking was the rather flat front seats, which were ok around town but not the most supportive of thrones on a longer drive.

Where the XT5 holds an advantage over its competition is in passenger space and cargo room where it feels more like a mid-sizer than a compact. Second-row seats recline and can slide fore and aft to maximize either legroom or cargo room. Behind those seats, you’ll find a generous 852 litres of space. Fold them down and that jumps up to a cavernous 1784 litres, numbers bested only by the Infiniti QX50, and even then not by an appreciable amount. 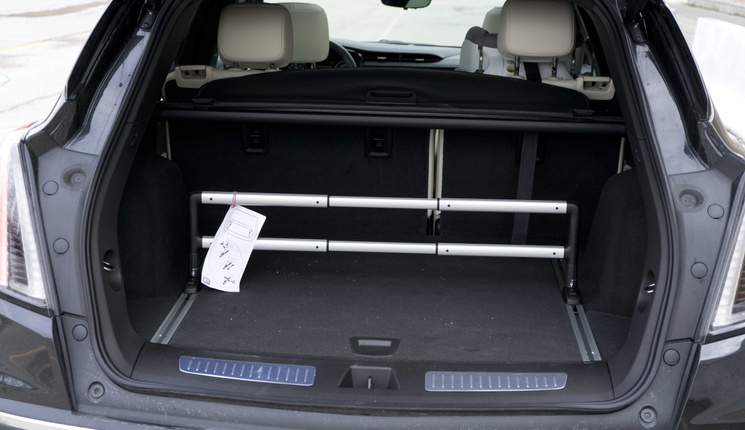 
The XT5 isn’t going to win any awards for handling nor is it going to blow anyone away with power like some others it competes with. The Sport trim I was driving didn’t feel any more agile or grippy than before. Which meant that it drove just fine with an emphasis on comfort and refinement. Avoiding sippy cup spills and not causing them is probably a more important metric that shoppers in this class are looking for and in that respect, the XT5 excels. The adaptive dampers were able to soak up the worst of Toronto’s roads with impressive composure.

The 3.6-litre V6 makes nice noises and delivers adequate power and torque when called upon. It’s hooked up to a 9-speed automatic that shifts through its ratios quickly and seamlessly, although an 11.5L per 100 km reading after a long drive wasn’t exactly anything to write home about. And that’s with the auto stop-start system active, which now gets a kill switch if you don’t want it on.

But apart from sub-par economy powertrain complaints are few. Until you compare it to some of its German competition, who are miles ahead in this department. The XT5 simply can’t keep up with their turbocharged six-cylinder motors that develop gobs of torque and a blitzkrieg worth of noise fired out the rear pipes as an added bonus. And they do this for not a lot more money and little to no detriment at the pumps. So if outright speed and a bit of tom-foolery tickle your fancy after the school run, you might find the Cadillac lacking. 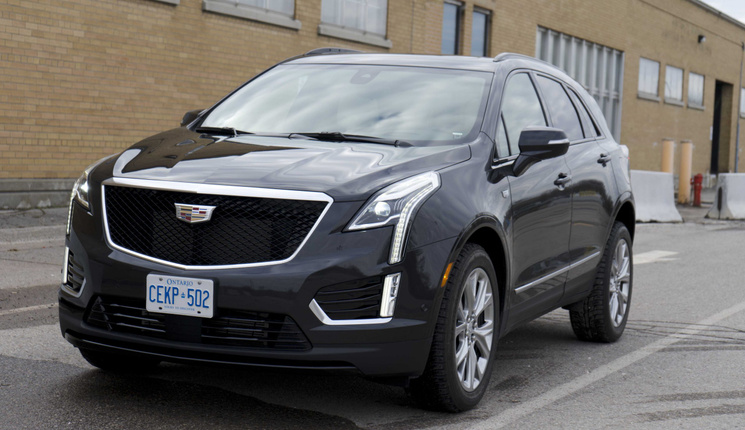 AWD you can turn off


What this XT5 can do that no one else in this class can is run as a pure front-driver, by disconnecting the rear wheels from the equation. And it's driver-selectable. The default drive mode, Tour, is front-wheel drive only, or you can pick between AWD, Sport, and Off-road. All those will bring the rear wheels back into play, while Sport mode shuffles more power to the rear for a sportier feel. Cadillac calls this their twin-clutch AWD system and it is capable of sending 100 percent of the drive torque to either the front or rear axle or either of the rear wheels when necessary.

I mainly kept it in Tour to net the best efficiency possible.


The XT5 is Cadillac’s bread and butter vehicle and there’s good reason for it. It’s quiet, comfortable, spacious, and has you covered on the tech front. The addition of a turbocharged 4-cylinder on the base trim was an excellent add, and between it and the V6 there’s not a whole lot of difference in real-world power. Thank the smaller engines turbo and immediate torque production for that.

But the real story here is all the little nip and tuck improvements to the interior and the addition of more standard equipment (albeit for more money) in an attempt to better align this Caddy with its competition. The last time I drove the XT5 I found it hard to recommend over its rivals and while some of them are still ahead in departments like powertrains and infotainment, the case for Cadillac’s best-selling vehicle has never been stronger.