Slotting between the somewhat bonkers X6M and somewhat “lowlier” X6 XDrive40i, this less powerful-more powerful X6 is still a certified maniac on the power front

Join the Conversation (0)
Ohhhh, it was heavily disliked when it first arrived, the BMW X6. Jeremy Clarkson famously called it one of the worst cars he’d ever driven, and he proceeded to slide down a grassy hill with it just to show how pointless it was. It was far from a traditional BMW. While many will argue its X5 sibling was just as far off as the X6 tried to mix car and SUV to form a Sports Activity Coupé which was somehow worse in that it treaded even more heavily on the fast sports cars and sedans BMW had always done so well

Of course, it may have been strange back in 2009 when it launched, but it’s right on the mark now as most every luxury manufacturer – German or otherwise – has a four-door coupé SUV of their own. With the X4, meanwhile, BMW has two.

For 2020, the X6 joins the ranks of current-gen BMW models. That means the X6 now gets iDrive 7.0 infotainment, a 12.3-inch digital gauge cluster, new heads-up display and new styling. Styling that’s capped off by yet another very large take on the traditional BMW kidney grille as well as optional blue-bulbed BMW laser headlights. 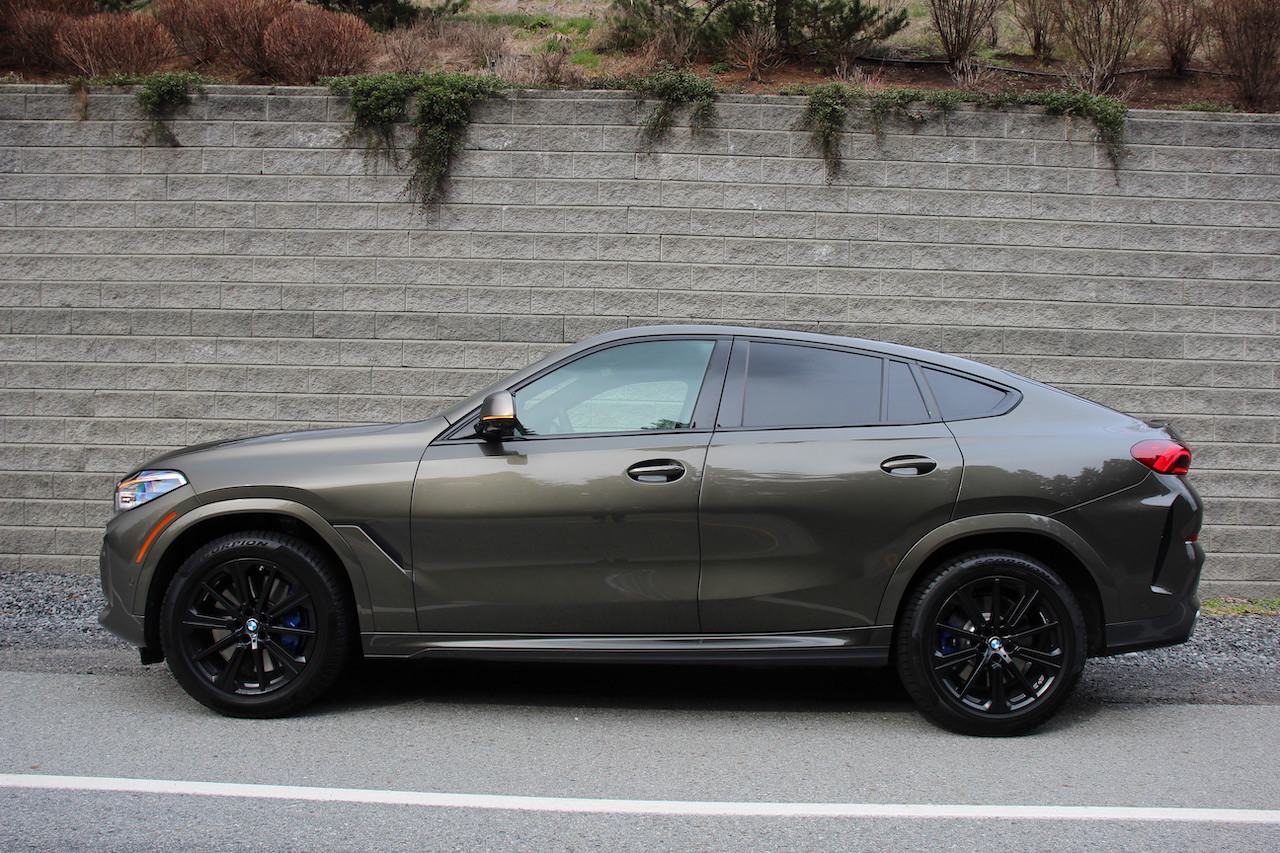 Slotting between the somewhat bonkers X6M and somewhat “lowlier” X6 XDrive40i, this less powerful-more powerful X6 is still a certified maniac on the power front. That’s a twin-turbo V8 good for 553 horsepower and 523 lb-ft of torque fed to all four wheels (but mostly the rears) through an eight-speed paddle shift auto. Indeed, that’s only about 10 less horsepower last year’s X6M.

Once one sits inside, there’s little issue with front headroom, surprisingly, even with that swooping roofline and panoramic moonroof. The seating position, though, is tougher to deal with. No matter how much I fiddled with the seat controls and tilt/telescoping steering wheel, I always felt too canted back. That was surprising considering the driver’s seating position in BMWs is usually spot-on.

The rest of it works well – the centre stack is canted nicely towards the driver and the view out over the somewhat stubby hood is a good one. The view out back is less so as the rear window opening is quite small. At 952 mm, rear headroom isn’t terrible, but the fact that the rear window opening is so small means that rear passengers’ heads affect rearward visibility that much more.

However, while it may be crazy to consider, it appears that X6 owners do use the rear seats for adults if my tester’s quad-zone climate control, heated rear seats and rear-seat USB ports are any indication. Either that, or BMW is messing with us – which I find hard to believe.

Also somewhat tough to believe – well, tough to swallow, anyway – is the cost of the one option package on my tester. 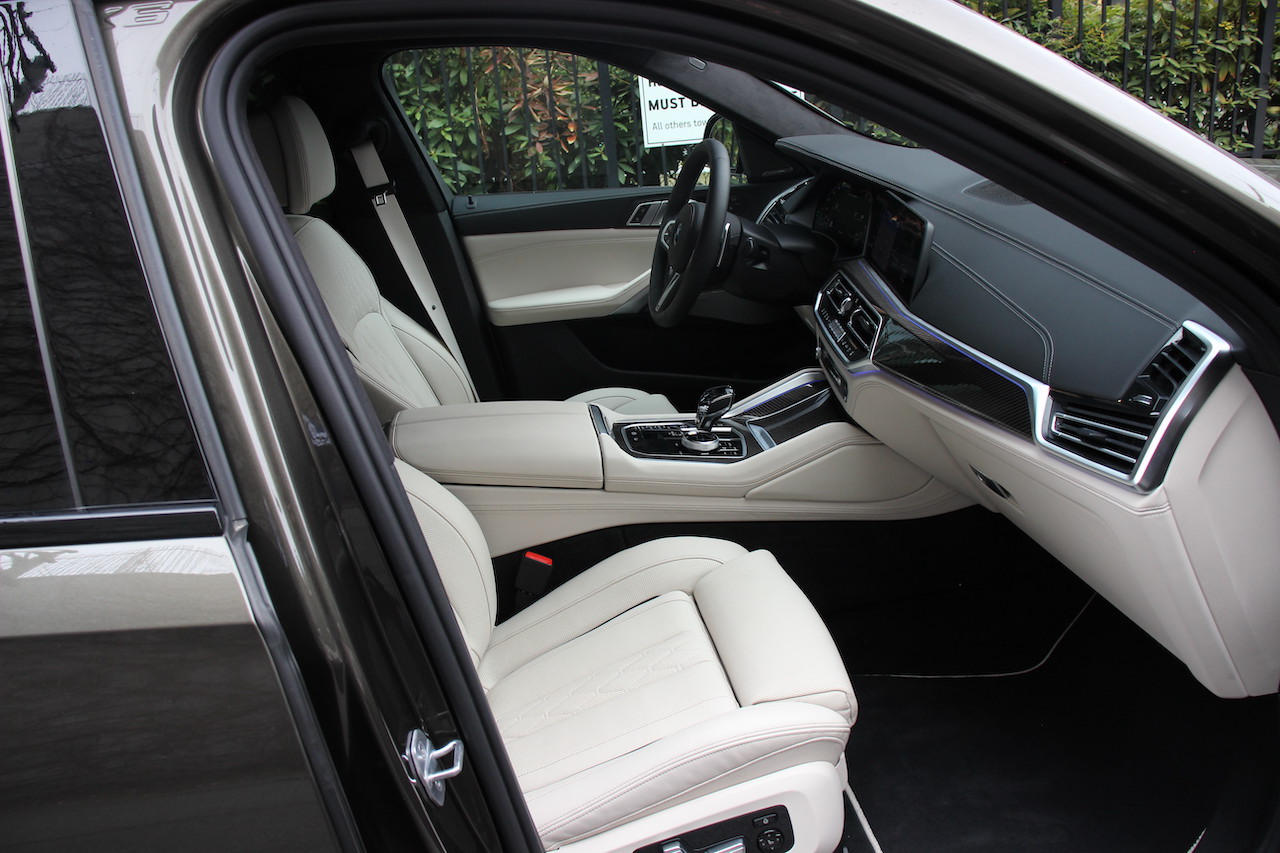 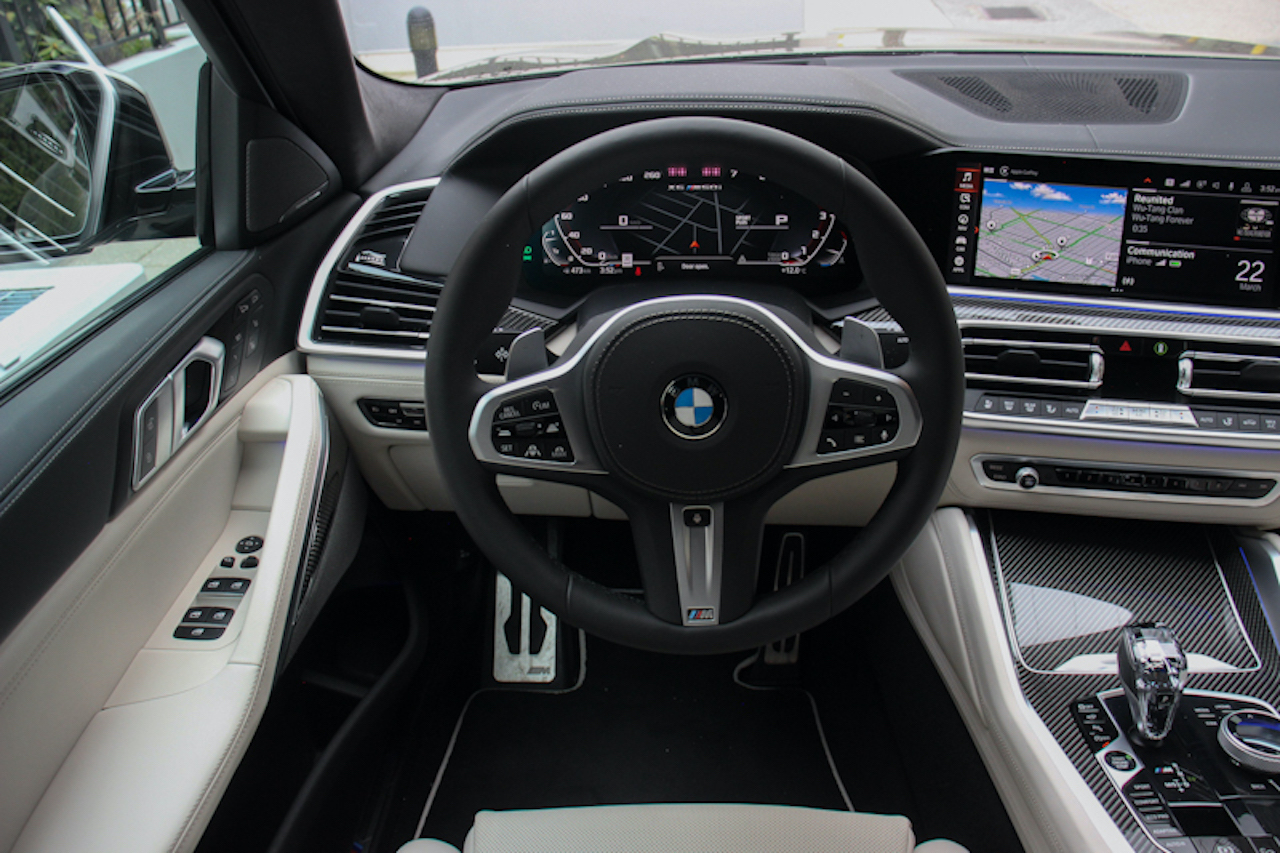 It’s called the Premium Excellence package and if that sounds expensive, it’s because at $17,000, it is. It does get you a laundry list of features, though: that four-zone climate control mentioned earlier, heated seats all around, WiFi hotspot, Harman Kardon audio with wireless charging, BMW Assistant (ask the car to guide you to the nearest gas station, and it will, as well as send you reminders, etc.), every electronic driving aid you can think of, heated and cooled cupholders that actually work rather well, laser headlights and a whole lot more. You can, of course, elect to go with smaller packages ranging from $1,550 to $9,000 if you’d rather pick and choose your options.

Those power figures, though? Not hard to believe at all. The X6 M50i positively explodes off of the line, completing the 0-100 km/h sprint in a claimed 4.3 seconds. That is not a typo – that is cut-and-pasted from BMW’s website and when you plant your right foot, there’s no need to doubt the validity of that figure.

The engine is so free-revving that it seems to do so faster than your index finger can flip the right hand side paddle for an upshift, and the speed is piled on so quickly and with almost a complete lack of turbo lag and with such a gobsmacking V8 howl that you have to seriously question how the X6M could feel any faster than this or indeed, that you need anything faster than this. You don’t, of course, but that’s beside the point.

If the engine and powertrain have “X6M” written all over them, the handling is where you start to see the two models diverge. Body roll is too pronounced to be considered that of a proper performance SUV, the seats aren’t quite highly bolstered enough to keep your tush planted as you start to wind through the bends and the steering could use more feel. It’s not that the steering’s not responsive – not by a long shot as turn in is instantaneous, especially in Sport mode – it’s just that the driver has to trust that the car’s going to do what they want it to. 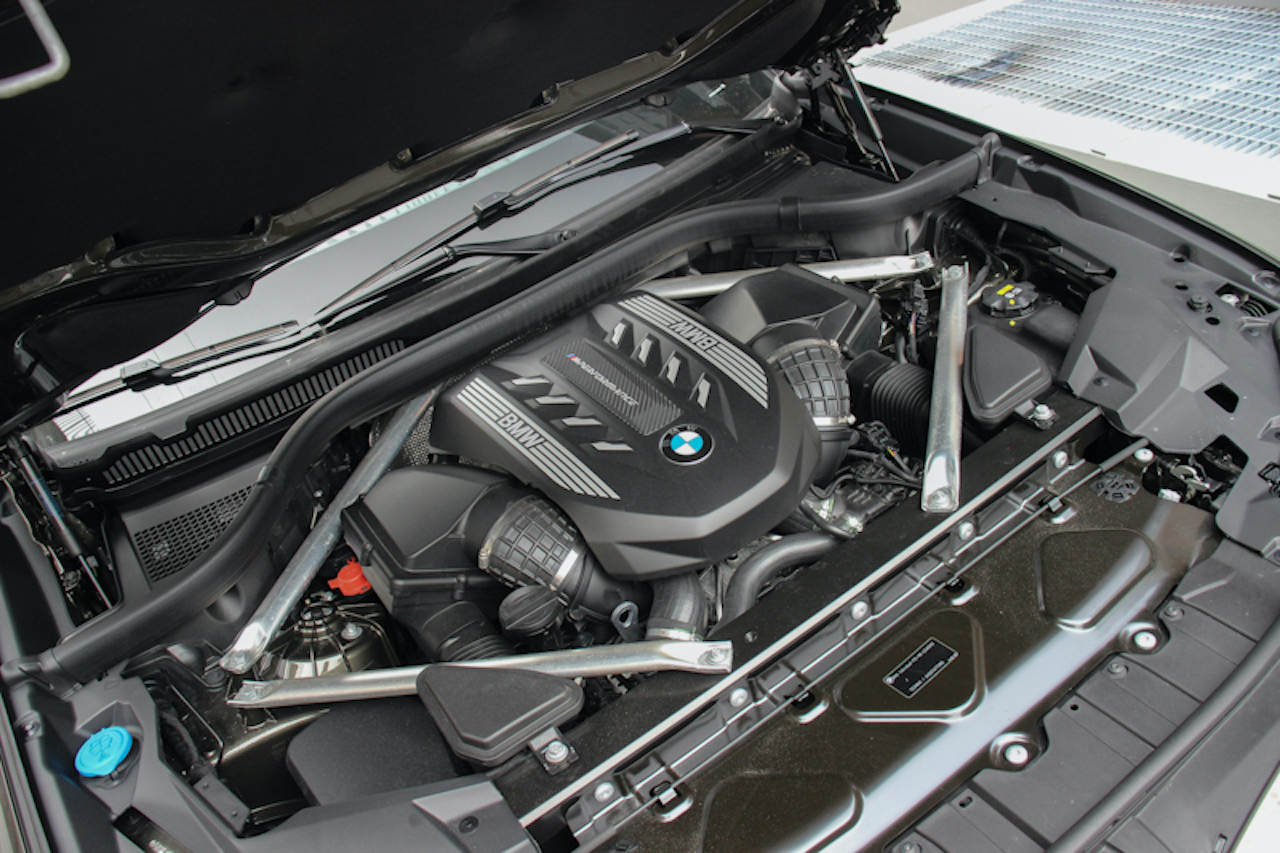 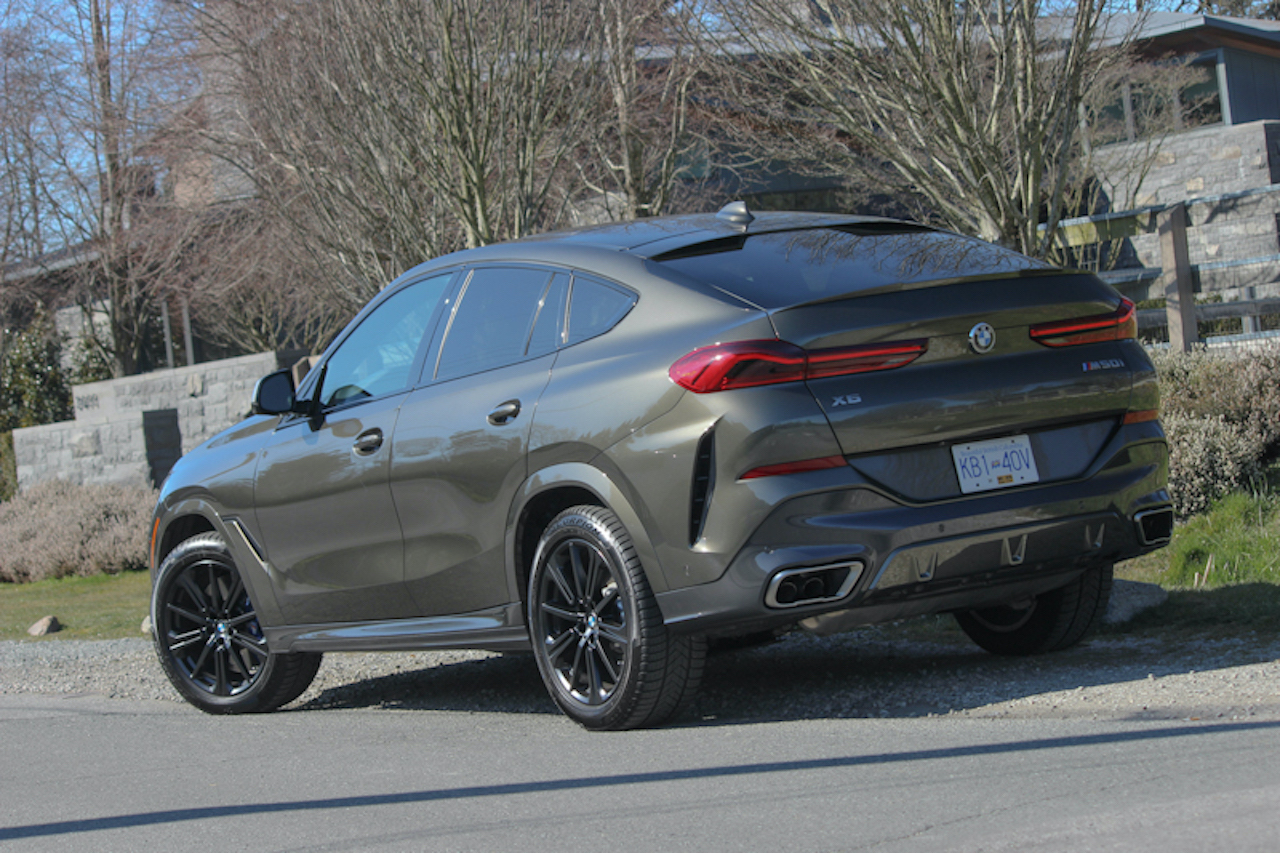 Of course, BMW had to leave a modicum of differentiation between the X6 M50i and the X6M and I suspect that the X6M would address many of these issues.

What that wouldn’t address, though, is how the X6 is somewhat illogical, really. When you can get an X5 M50i for pretty much the same money and get pretty much the exact performance but with a much more usable back seat and boot, well, that just makes so much more sense, doesn’t it?

Sure it does. But that doesn’t matter.