Bentleys are a favourite of mine. They have a distinct combination of exceptional design, hand finishing, performance, usability, and exclusivity that is unmatched by any other marque.

Having driven nearly every iteration of the previous generation Continental – from the relaxed W12 Speed to the thrilling GT3-R – the introduction of the all-new Continental has me excited to try all of the new flavours.

A few months ago, I spent some time with the W12 coupe and it’s not just a stunner. It’s quicker than any grand tourer should be, has state of the art technology, and is filled with surprising levels of modern opulence.

This GTC V8, on the other hand, could be the singular car that can truly do it all and do it with style. The V8 brings a little feisty character to the Continental, all-wheel drive is standard, naturally, and this Continental drops its top at the press of a button.

One of Bentley's modern traditions is making a clear distinction between the W12 and V8 models. While the W12s are the most powerful in each model range, they are more sedate than the V8s.

Visually it’s rather difficult to make the distinction if you look at a Continental casually. However, if you look closely at a W12, you’ll see the number twelve subtly denoted in the fender vents.

Those vents of the V8s are unadorned and regular V8 models will have V8 badging in place of the Union Jack on this Launch Edition. Otherwise, V8 models have quad exhaust pipes instead of the W12’s large ovals.

What’s under the bonnet? It’s a sophisticated and powerful 4.0 litre, 32-valve, twin   turbocharged V8 that generates 542 horsepower at 6000 RPM. The V8's story is really with the way it produces torque and, like most modern turbos, it makes incredible twist. All 568 pounds-feet are available from 2,000 to 4,000 RPM, which translates to effortless acceleration any time you wish. If you listen carefully, it rewards you with a subtle soundtrack from time to time.

In an interesting departure, Bentley has dropped the traditional automatic transmission for an eight-speed dual clutch gearbox. This type of transmission is typically reserved for all-out supercars, but in this Continental it's perfectly calibrated to suit the car’s grand touring nature, with the added benefit of remarkably rapid shifts.

The all-wheel drive system is also revised. The default torque split is a modest and effective 40 per cent front, 60 per cent rear, but in Sport mode, up to 83% of engine torque will transfer to the rear axle. I will confess that on the road, the difference is very subtle, but that also speaks to the overall dynamic competence of the new Continental. Regardless, the all-wheel drive system makes this an all weather grand tourer. 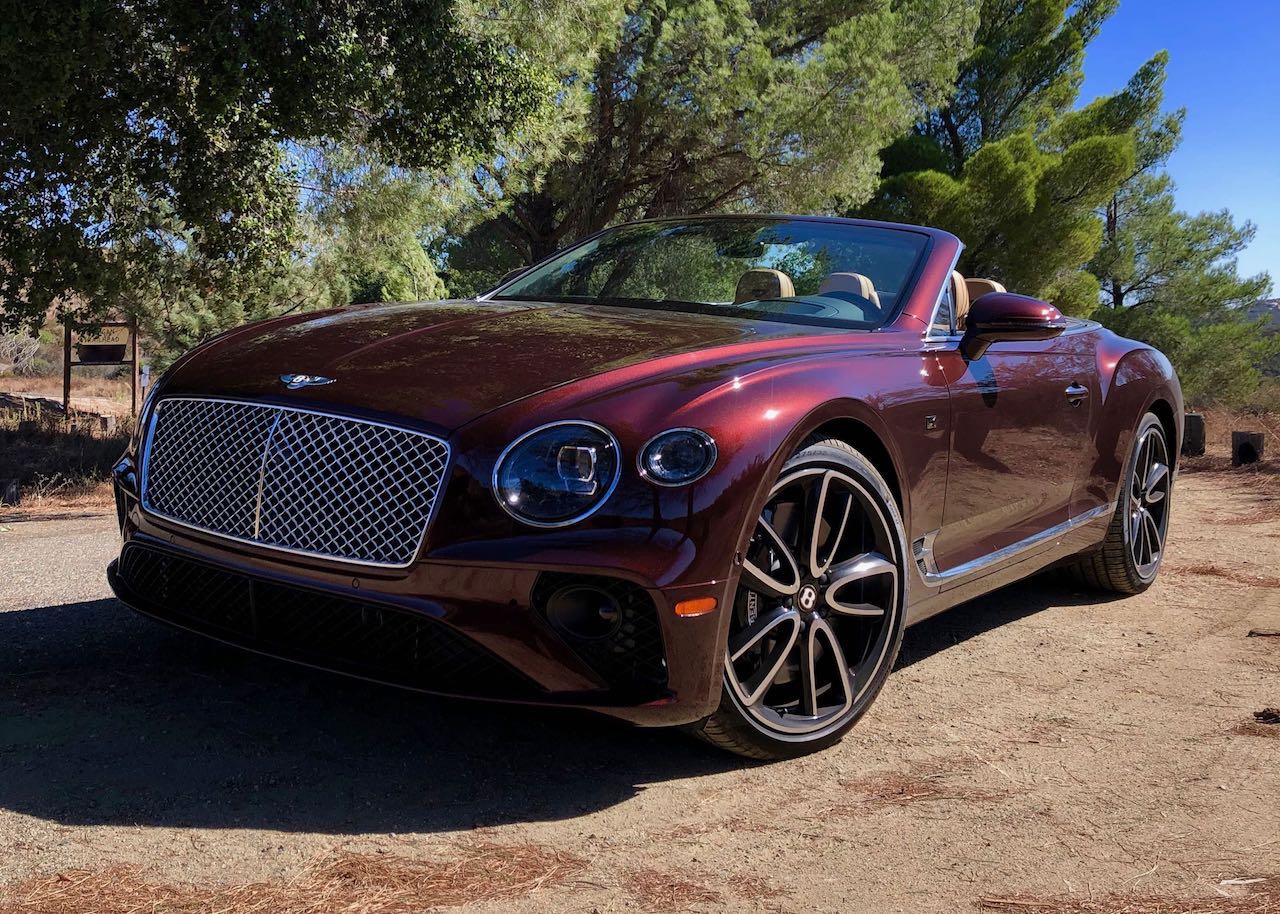 Brakes are massive. There is no other word for it. The calipers have more pistons than you can count. Power and feel are simply outstanding.

Weight distribution is 55 per cent front, 45 per cent rear and, to be honest, given the all new platform, I’m surprised that we don’t find the engine a little further back in the chassis, though any driver would be hard pressed to tell the difference.

Given that the Continental GTC V8 tips the scales at over 5,100 pounds, that sheer amount of mass negates the notion of exacting engine placement. In a lighter automobile, the position of the motor makes all of the difference. In the Continental, it’s almost irrelevant.

If you were compelled to push this Continental GTC V8 to its limits, it will launch from zero and hit sixty miles an hour in 3.9 seconds. Top speed is two ticks shy of two hundred miles an hour. The Continental doesn’t demand that you push its limits. Rather it reminds you that it quietly possesses a massive reserve of performance.

From the driver’s seat, the GTC can go from wafting along the countryside to tackling the twisty bits with a flick of that drive mode dial. It responds in every way with athleticism, giving the pilot confidence to carve a perfect line through a corner with this Bentley – and to even attack them when necessary.

For Bentley, transforming the coupe in to a convertible is a monumental task. Naturally, the dual pane glass is retained, which does wonders for road noise. The sophisticated power roof is finely finished inside and out and clearly lined with layers and layers of sound deadening. 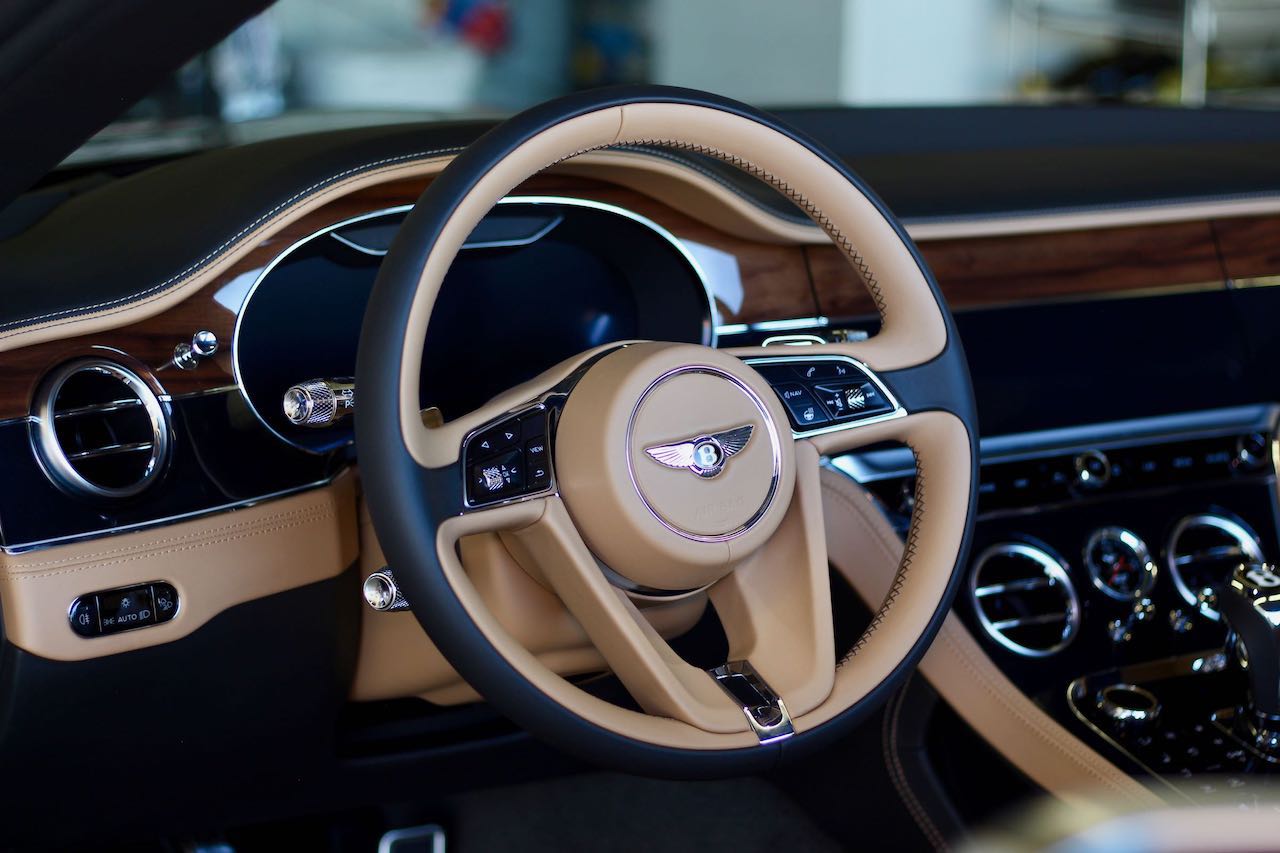 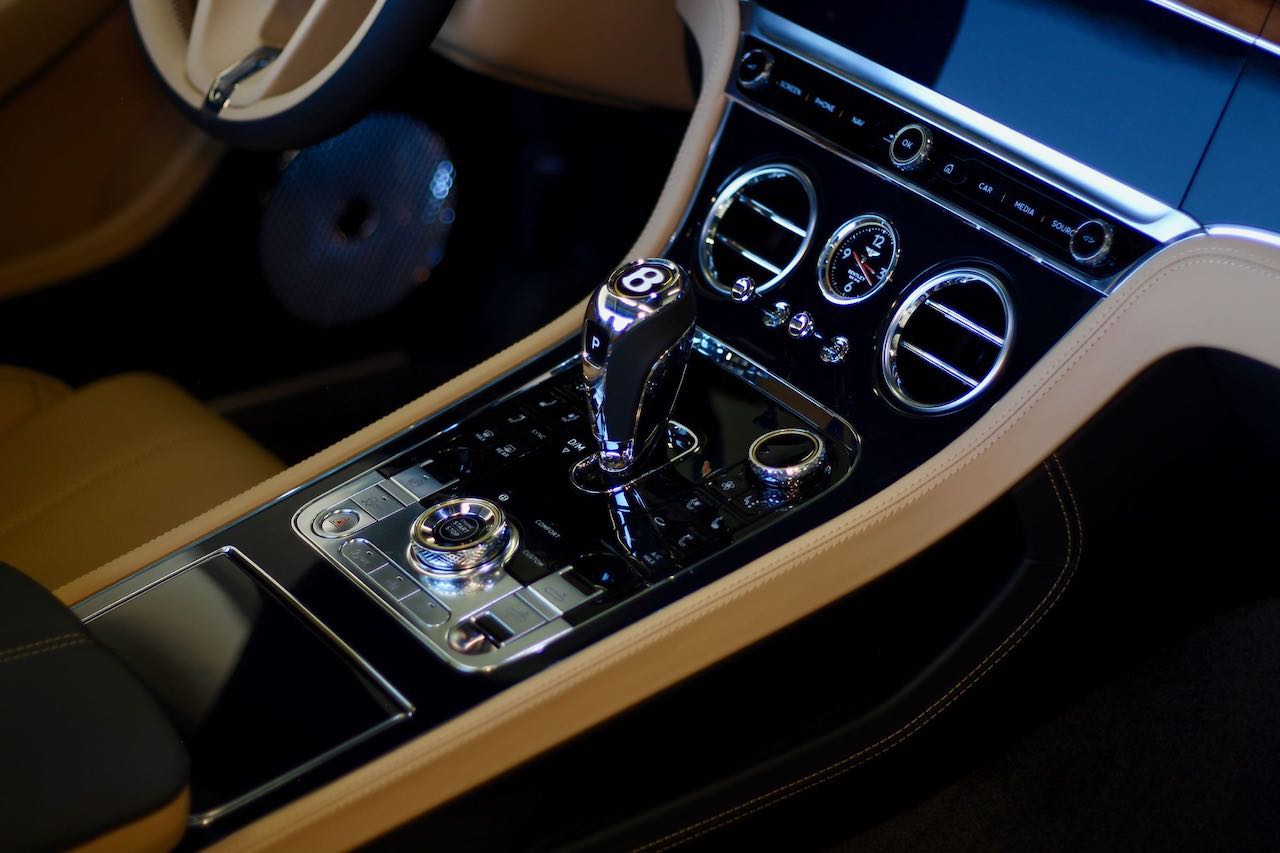 The roof opens and closes at speeds up to 30 mph in less than twenty seconds.

Given the lack of cowl shake and the retained chassis stiffness, there is an abundance of bracing in this chassis. No need to get into details because that tale is told on the scales. This convertible is said to add 350 pounds to the curb weight of the Continental. For context, depending on how deep you dive into the options list, the V8 is roughly 130 pounds lighter than the W12.

The lengths to which Bentley has reached to ensure passenger comfort, in every condition, is remarkable. The neck warmer and heated armrests are a delightful surprise. And isn’t that the definition of luxury?

The seats are sublime. Supportive. Highly adjustable. Heated and cooled. These are fitted with the massaging option, as well, and are perfection.

As for the rest of the interior, it’s modern and gorgeous, and there simply can’t be finer materials than those you find here. Interior lighting is stunning once the sun goes down.

The rotating display is the Continental’s parlour trick. Refined, yes, but a cool trick nonetheless. At rest, all you see is the veneer stretching across the dashboard. When running, you have your choice of the massive touchscreen or the three analog dials. 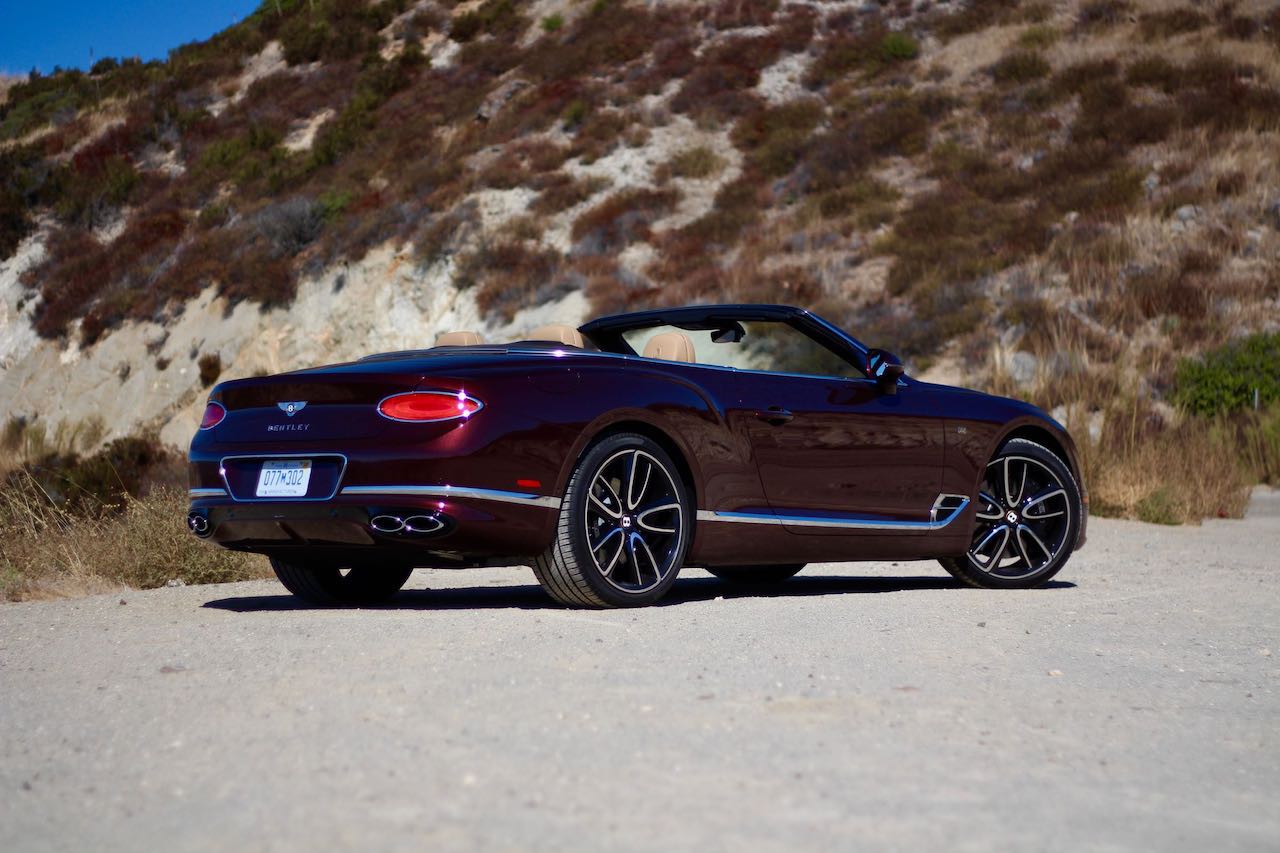 Naturally, there is Apple Car Play, which I use seamlessly every time I’m behind the wheel. The heads up display is a nice touch, as is a full suite of cutting edge advanced driver assist systems, enhancing both convenience and safety.

The new Continental features four available drive modes: Comfort, Sport, Bentley, and Custom. Bentley is the default mode and sort of bridges the difference between Comfort and Sport.

To be fair, Comfort is certainly relaxed, but it’s no feather pillow. Similarly, Sport doesn’t transform the Continental into a ferocious supercar, either. The differences between the modes are subtle and all remain true to this car’s grand touring intentions.

Among the equipment fitted to this model is the Bentley Dynamic Ride option, which includes the Active Roll Control system and this is a must have for any new Continental.

This is an active anti-roll bar system that optimizes both ride and handling without compromise because it reacts instantaneously. In straight line driving,

The dampers are the adaptive type and, to be fair, these are calibrated to perfection. Certainly, there’s not a better damper system among any competitors and if there was an award for the best dampers for their intended purpose, these would win. 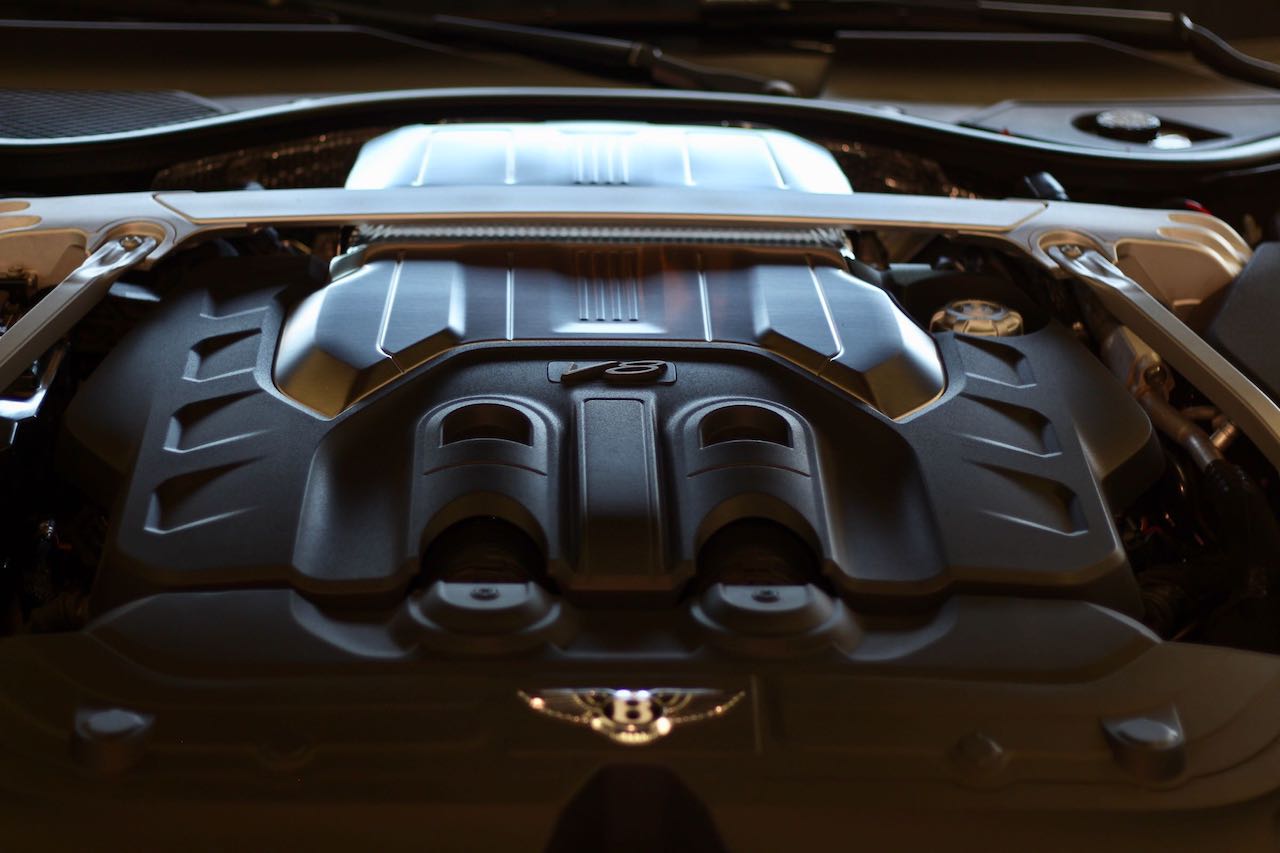 The air springs use three chambers to control ride comfort and handling, and the effective spring rates are tied to the drive modes.

This particular Continental GTC V8 is what the company calls a First Edition. This means that it’s finely finished and properly equipped with nearly every desirable option. This as a single line item option is over $63,000.

The Bentley Dynamic Ride active anti-roll bar system is an additional $7,177. The Dark Grey Metallic roof finishing is $3,140. Among a handful of other options, the delightful Naim audio system is $11,715.  In total, this is a grand touring convertible with a price just north of $400,000. And worth every penny.

I'll let you in on a little secret. As much as the V8 likes to announce itself with its low-frequency rumble and the occasional pops on overrun, much of that sound isn't exactly natural. Like many modern cars, some of that exhaust rumble is pumped into the cabin via the sound system.

While it isn't genuine, Bentley is able to better control the aural experience of the GTC's passengers with this method, and this is the one occasion I can get behind the manufactured sound.

That's because the Continental GTC V8 is indeed one of those cars that can truly do it all. It's a convertible with the acceleration of a supercar, the all-weather traction of an off-roader, is unmatched in its design details and materials, and whether the roof is open or closed, offers a comfortable motoring experience that is true to the ethos of grand touring.

The Continental GTC V8 turns an ordinary drive into an extraordinary occasion. Imagine driving the perfect road with the top down, the understated rumble of the engine, your favourite music, and your best copilot. This is exactly how this Bentley should be experienced.