The C-HR’s hipster sibling knew about your urban transportation needs before you did.

The automotive industry is full of surprises. Here’s one: the Lexus UX hit the market as a far more conservative and sedate crossover than the concept car suggested it might be.

The latter debuted at the Paris Motor Show in 2016, and it was wild. Sharp angles left and right, insanely exaggerated wheel flares, and seats that looked like they were made from leather belts wrapped around a cast iron frame. In fact, it looked in some ways, sans belt-seats, like the production version of the Toyota subcompact crossover with which it shares a platform, the C-HR.

By the time Lexus took it to market last year, though, the C-HR was left to carry the torch of whimsy, while the UX is dialed back considerably. In my view, this is the right move. By the time people are paying $40,000 or more for an urban crossover – or just over $50,000 in the case of this 250h with F Sport packaging – they’re past the stage where they find eccentricity appealing and are more concerned with efficiencies and practicalities.

In those regards, the Lexus UX excels in a great many areas – but not in all of them.

One of Canada’s Most Fuel-efficient Crossovers


The 2.0-litre four-cylinder gas-powered engine used in the UX, which feels nicely energetic with its 181 horsepower (net system torque is not declared), is paired with what Lexus’s self-charging hybrid system – in other words, it’s a traditional hybrid that doesn’t require a plug. That makes it the only traditional hybrid not only in the premium subcompact crossover segment but in any subcompact crossover in Canada, period.

This provides the obvious benefit of fuel efficiency with no additional effort. No other premium subcompact crossover comes close to matching its 6.0 L/100 combined fuel rating from Natural Resources Canada; the three closest all-wheel-drive competitors are the Mercedes-Benz GLA 250 and the Volvo XC40, which both average 9.0 L/100 km combined, and the Buick Encore with engine stop-start at 8.8 L/100 km. 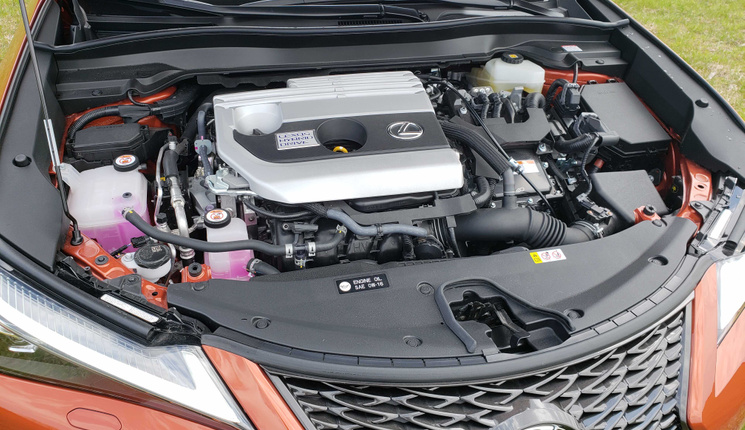 In fact, even once you dig into mainstream brands – including Toyota’s own C-HR, which doesn’t come as a hybrid – there’s not a single other all-wheel-drive crossover on the market that can compete with the UX’s figures without getting into plug-in hybrids or electrics.

And unlike the C-HR or the UX 200 non-hybrid version, the addition of the hybrid system enables all-wheel drive because it adds an electric motor to the rear axle. Plus, the car can also run in pure electric mode, which helped tremendously in bringing my week-long average down to 6.3 L/100 km because that figure actually went down as the car ran in EV mode in stop-and-go highway traffic. So, if you’re looking for an all-wheel-drive crossover, have the budget for premium, and fuel efficiency is your primary motivator, you’re looking in the right direction. 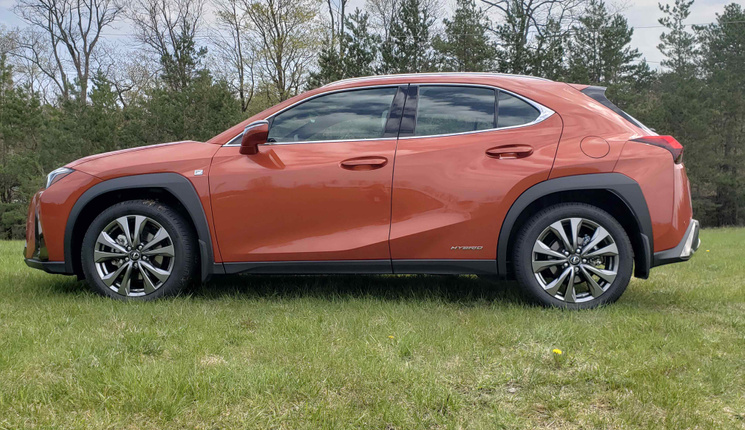 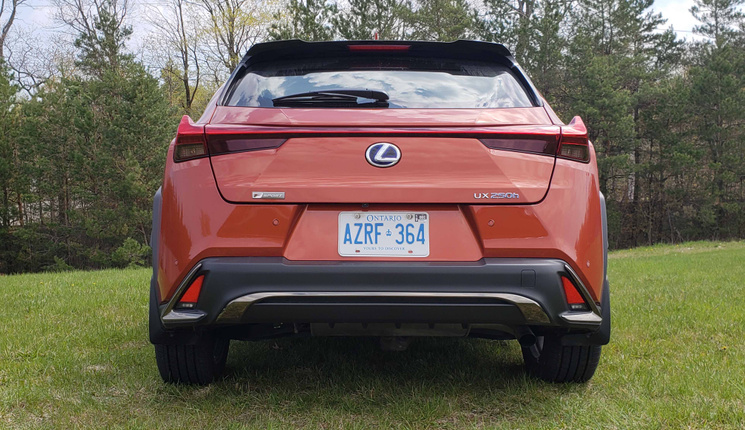 
That said, there are a few things you should know before you run off to the dealership.

For one thing, there are a few of these tiny crossovers that Natural Resources Canada doesn’t even classify as such, and this is one of them: when you go looking for it, you’ll find it in the car section. This is determined by a few factors, but one of the primary ones is ground clearance, a line that’s missing from the official Lexus specification sheet. Informally, it’s reported in several places as being 16 cm, which isn’t awful but might not be at a level some buyers would expect from something classified as an SUV. It’s therefore perhaps better thought of as a slightly lifted hatchback.

And then there’s the matter of the cargo area. This genre of vehicle tends not to offer a lot of space to begin with, but having to squeeze in that electric motor and battery means making a sacrifice. The official figure is 484 litres, but the actual usable space with the cargo cover amounts to roughly one large suitcase, and you’ll have to lift it higher than average to get it in. On the upside, the rear seats fold nicely flat, so as long as you don’t have kids you need to bring with you, Ikea runs aren’t out of the question. But expect large-volume trips to the grocery store to spill over into the footwells. 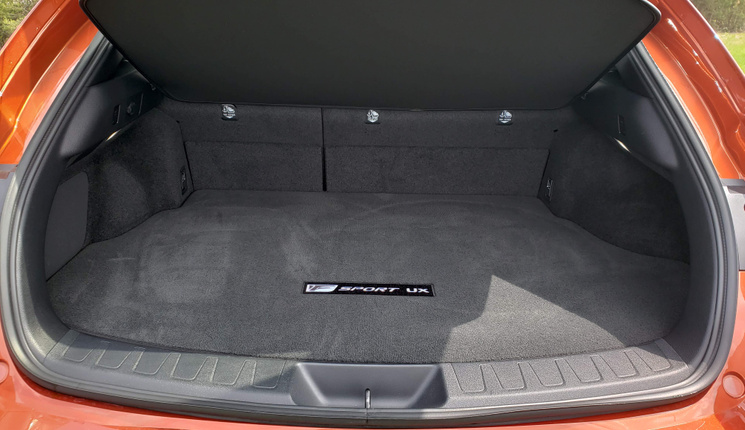 Visibility all-around is relatively good, although it’s worth noting that the B-pillar is rather large. In my seating position, which is relatively far forward, it blocks a fair amount of the view on left-side shoulder checks.


On entering the interior, the first impression the UX conveys is one of a clean, modern aesthetic. The use of colour and texture is tasteful, the layout is clean and uncluttered, and the use of larger rear windows than the C-HR allows more light to flood in. The piece of the instrument cluster that slides on start-up adds a cool, techy element as part of the F Sport 2 package, although being that it’s purely visual but has the potential to create issues should it ever break, I wonder whether it’s practical or strictly necessary. The only thing that seems rather out of place is the CD player, which I’m surprised enough people still ask for that automakers keep installing them. (They must be talking to focus groups that aren’t in my demographic.) 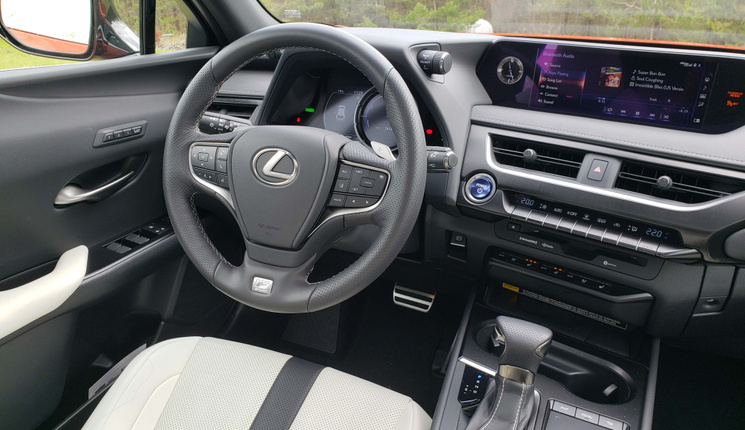 As far as whether the drive feel follows that aesthetic, the answer is yes and no. The amount of power feels right, and while a CVT can often have an awkward launch feel, this one doesn't. Once it gets going nicely with the help of the electric motor, this transmission continues feeling relatively natural throughout the rest of its range. Its handling is suitably peppy for the body style and size, although it’s held back somewhat by steering that doesn’t match the car’s potential for responsiveness.


I remain a staunch detractor on touchpads in cars. I find it too difficult to orient finger to pointer to screen and also give adequate attention to the road. To each his or her own, but this system’s design would be enough to send me running elsewhere. That may have just as much to do with the fact that I’m an Android user and Android Auto isn’t available, though; that app can make up for a lot of ills. Apple CarPlay works, so iPhone users may have a better time with it.

That said, I do like Lexus’s tweak with the functions built into the hand rest such as volume and tuning. It’s just a touch far back to be comfortable in the seating position required by my short legs, but it puts a lot of the most important functions in locations that make them easy to perform without needing to be looked at. 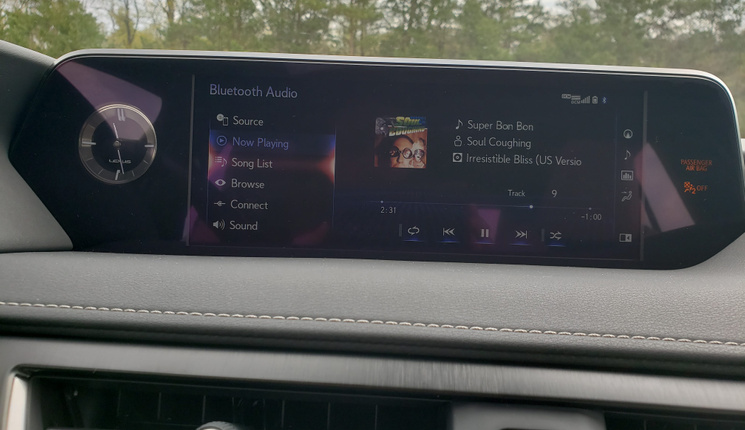 The F Sport 2 package added to this tester costs $8,800 – there’s some sticker shock – and includes an F Sport branded steering wheel, 18-inch wheels, and front seats with driver’s side memory (which, admittedly, are very nice), on-board navigation, an eight-speaker sound system (up from six), the upgraded instrument cluster, a hands-free liftgate, a wireless phone charger, auto-tilting reversing mirrors, parking assist with automatic braking, and LED headlamps with adaptive front lighting, along with some other minor features.


The Lexus UX should absolutely top the list of test drives for eco-minded drivers looking for a small but trendy city runabout. Unfortunately, those same buyers are the sort who tend to like to own the latest tech gadgets, and the Lexus infotainment system still needs some work to keep pace with the advancements being made by its competitors. Still, those who aren’t easily fussed about such things, and who don’t have a lot of need for cargo space, will find it to be a fashionable and frugal subcompact crossover alternative.