Last year at the press launch of the redesigned 2019 BMW X5 we confirmed its newfound ability to take on a tough off-road trail and make it out at the other end shiny side up and lasers intact.

BMW engineers were eager to show off how much progress they made with the new suspension and an optional off-road package (locking rear differential, skid plates, off-road specific drive modes) that allowed the X5 to climb muddy rock-infested hills and reach places no sane X5 owner would ever take it.

It felt like we spent more time off the road than we did on it. No longer satisfied playing second fiddle to the mudding capabilities of the Range Rover and the Porsche Cayenne, the X5's off-road prowess now makes it more competitive but also seems like an answer to a question no one asked.

Curious how the new X5 would fare through a week of normal driving, the type that most customers would typically put it through, I borrowed one from BMW. And as luck would have it a generous dumping of snow courtesy of the endless winter of 2019 made for just about the perfect testing grounds for the latest SUV from Munich South Carolina.

There was snow, and wind, and sleet, and ice—so much ice. Falling from the sky like innocent rain but freezing on contact with everything it landed on. The type of weather that has given most Canadians the reason they needed to dump their old sedans en masse for all-wheel-drive (AWD) equipped crossovers.

It snowed the entire week I had the X5. But I didn’t mind. The latest version of BMW’s xDrive intelligent AWD system precisely routes torque between the front and rear wheels as required by the conditions. It does this seamlessly and can even send 100 percent of its power to the rear for a more efficient and dynamic driving experience. 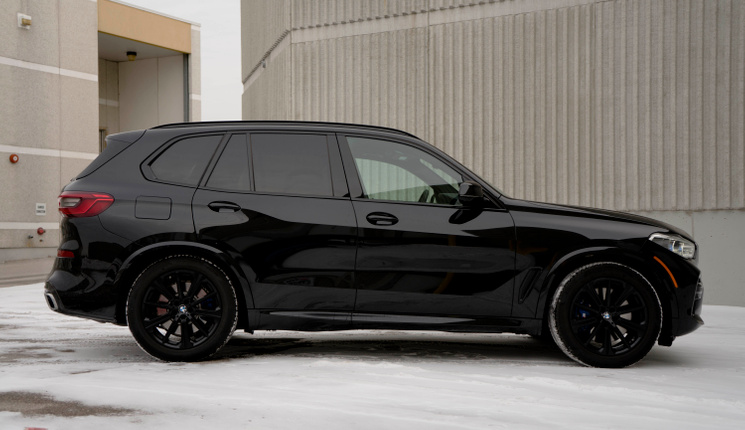 On a snowy highway, the X5 was an absolute rock. Lane changes can be tricky in these conditions but it plowed through the accumulated snow and slush in between lanes without even the slightest wiggle. This impressive stability might feel like a golden ticket to speed in bad weather, but you cannot defeat the laws of physics and even BMW's impressive xDrive can’t save you from stupid.

Up until this point I had only driven the 6-cylinder X5, and I found its silky 335 hp more than adequate. This time around, however, my tester was equipped with BMW’s newly updated V8. Still displacing 4.4 litres, the twin-scroll twin-turbo eight makes 456 hp, 11 more than the last generation, while torque remains the same at 479 lb-ft but arrives 500 revs sooner at just 1500 rpm. Routed through an 8-speed automatic the X5 can bolt from rest to 100 km/h in a factory claimed 4.7 seconds, a couple tenths faster than the old one and a full second faster than the 6-cylinder version.

It sounds great too, with a pleasant burble that never gets intrusive. To my butt-meter it feels even faster than the claimed acceleration numbers. There is power absolutely everywhere on the tach. When I finally found a dry-ish road and matted the gas pedal, the X5 xDrive50i left imprints of my kidneys on the seat back. I knew it was a powerful vehicle, but I didn’t expect it to be that fast. The transmission is a big factor, with ultra-quick shifts keeping the big V8 in the meat of its powerband. If you decide to pull one of the steering wheel mounted paddles the shifts arrive without any hesitation. And remember, there’s an M version of the X5 coming and it will make at minimum 600 hp. What a world we live in.

Evolutionary styling sees the signature kidney-grilles grow (much) larger, with slimmer canted headlights and a character line that rises sharply over the rear fenders. The look is similar to the X3. Except at the rear, where the taillights don’t instantly scream BMW. They don’t look bad, just a bit generic.

A lengthened wheelbase (42 mm), and slight increases in both width (69 mm) and height (19 mm) create a little more room for passengers, especially in the rear where it matters. Cargo room remains the same but you can order yours with a trick electric cargo cover that can disappear under the load floor at the press of a button.

The brand new cabin is a clear departure from the staid businesslike interiors BMW is known for. Luxuries like optional glass controls, knurled metal switchgear, and fine wood trim make it feel special. The cabin is more airy, your passenger riding shotgun a bit further away. It’s quieter; less of the world outside is allowed in. Even those big icy drops of rain ricocheting off the body were muted. 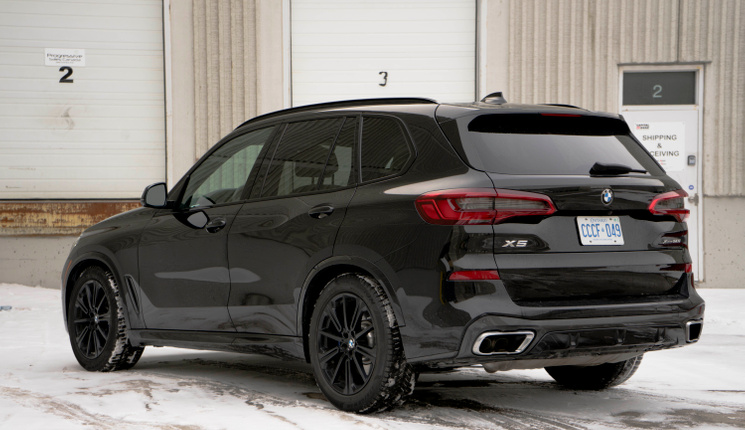 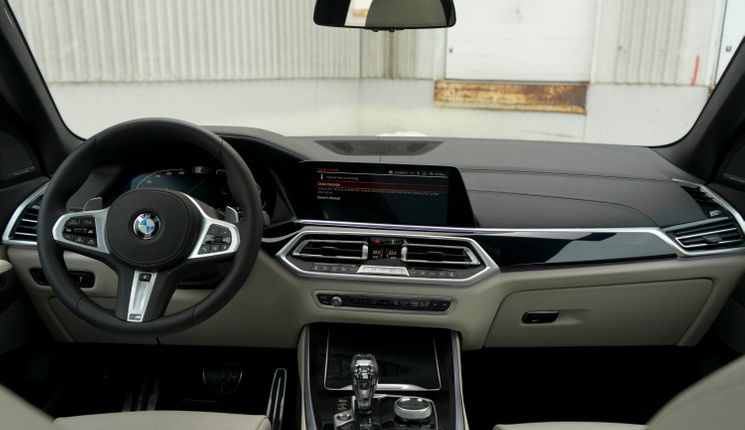 An optional adaptive air suspension, now on both axles delivers a supple ride. Even in sport mode, where the ride height gets automatically lowered by 20 mm.

But the result of all this extra refinement and comfort is a loss of some of that driver connection, that “BMWness”, the company was famous for injecting into everything that left their factories.

The old one had more road feel but it was nowhere near as smooth. And I suspect ride quality is high up on the list of attributes that customers shopping in this realm of near six-figure luxury SUVs are looking for.

This doesn’t mean it’s a wallflower when you show it a corner or two. It can still handle them, with relatively little body roll and more grip than something of this size should have. Credit here goes to that adaptive suspension that can be firmed up at the touch of a button and accurate but numb steering that allows you to trace a precise arc through the bends.

There’s an absolutely dizzying amount of tech features and gadgets in the X5. If you haven’t been in a new car lately, it can be a tad overwhelming. Infotainment systems have come a long, long way, from even five years ago and BMW’s seventh generation of iDrive debuting in the X5 is probably one of the best.

Officially known as Live Cockpit Professional (iDrive sounds so much better), this system combines a high-resolution 12.3-inch display for the instrument cluster and another 12.3-inch touch display in the centre.

Slick graphics and a super responsive interface allow you to zip through functions and apps just like on the latest smartphone. The home page is now made up of customizable widgets (up to four of them at a time) that allow you to display whatever you’d like on them in any order. Like if you wanted to have your nav map, weather, radio, and phone info grouped together on one page, have at it. Swipe across the screen and there are more pages where you can drop even more widgets, like the power and g-force meters, a news feed, and even a clock. It makes finding what you need to access easy.

All of this gets stored in the BMW cloud under an individual driver profile that can then be accessed in any other BMW you happen to get in, provided of course that it has this new system. 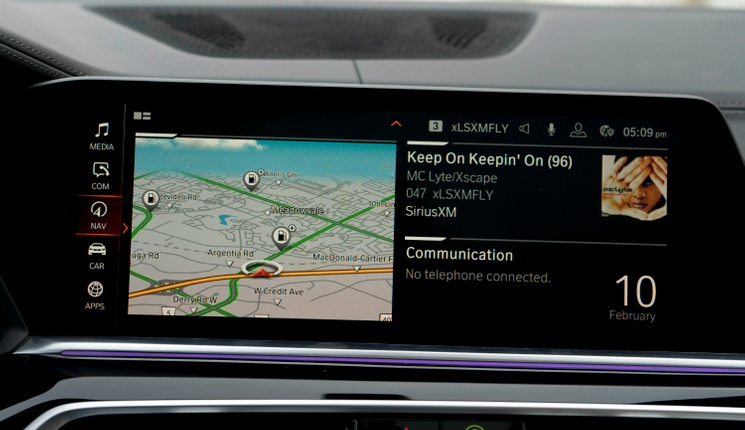 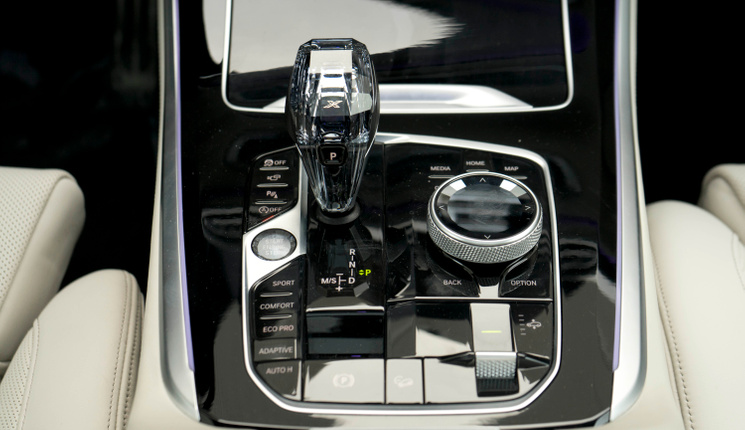 As responsive as the centre touchscreen is, BMW still provides a rotary controller, a much less distracting method of controlling all the various functions. And then there’s gesture control where waving your hand about like an orchestra conductor provides another (slightly gimmicky) way of interfacing with this newest version of iDrive.

You’d be correct in assuming that all of this hardware and software doesn’t come cheap. With a starting price of $86,000, $3000 more than last year, the X5 is a luxury SUV for the well-heeled. But you do get a lot more content this time around.

My tester was also equipped with the Premium Excellence Package, a $16,000 option. Yes, you read that correctly—sixteen thousand dollars. That’s the price of a new Kia Forte. No, you don’t get a compact sedan when checking of this extravagantly priced option but you do get a whole load of kit including that 2-axle air-suspension, laser headlights, 4-zone climate control, sumptuous leather covering the dash and virtually everything else, glass controls on the centre console, semi-autonomous driving capability, heated and cooled cupholders, heated and cooled massaging seats in the front, soft-close doors, a panoramic sunroof with embedded ambient lighting elements, and much more than I’m willing to list here. 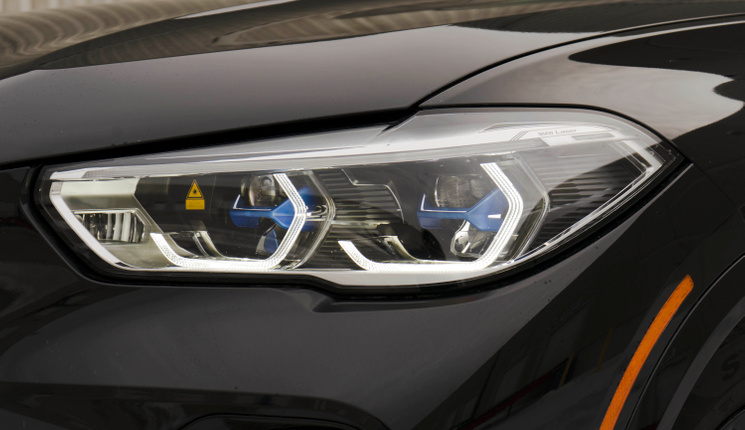 The X5 was one of the first to enter into the luxury SUV segment. And this fourth generation is easily the best iteration yet.

There’s more luxury, more performance, and a mind-blowing amount of tech wrapped in a visually pleasing package that will appeal to more people than ever before. Even those few that decide they want to venture off where the road ends.