Range claims are no joke to 2018 Prius Prime

Join the Conversation (2)
When Toyota sent the invite to check out the 2019 TRD-PRO line-up a few weeks ago in French River, the travel plans included a flight from Toronto to Sudbury. Living in Whitby, this made no sense to me, as the drive to French River is just a tick over 4 hours and would most certainly be more interesting than sitting in airports and spending a couple of hours in a tube. I asked Toyota what interesting vehicles they might have for the drive. They offered up a Prius Prime, which is the sedan version of the company’s popular hybrid line.

Over the years, I have been rather vocal about my beliefs that electric vehicles are not any greener than internal combustion engine powered vehicles and the infrastructure has a long way to go before it becomes truly viable enough to replace ICE for the majority of consumers. As a result, I don’t often review so-called green vehicles.

Where a plug-in hybrid such as the Prius Prime differs from a fully electric vehicle is the ability to be driven using a gasoline-powered engine when the usable charge runs out. In theory, these systems offer the best of both worlds and let’s face it, Toyota has been at the forefront of hybrid technology since the very first Prius hit the road.

The biggest daily driving drawback of most hybrids is that while the electric range is fine for in town driving, highway trips quickly become fossil-fueled and not too much better than their ICE powered counterparts.  When I saw that Toyota advertises a combined gas/EV range of 1,035 km, the Prime caught my interest.

Yes, I would LOVE to drive to Ontario’s north country in a Prius Prime. I would love to see if the car can achieve that lofty claim during a long highway drive in cool fall temperatures, with the HVAC system and heated seats in full swing.

My drive began with 59 km on the odometer, with no fuel used and a fully charged battery. Once I was out of town, I set the adaptive cruise control to 95 km/h, which is about the average cruising speed on my primary route, despite the posted 80 km/h limit. 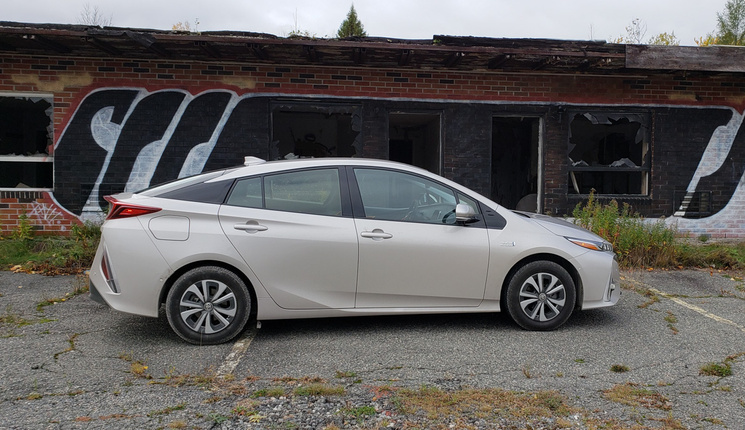 Arguably the most attractive Prius model offered to date, the Prime’s interior looks suitably modern. You might even call it futuristic, with swoops of glossy white surrounding equally glossy black surfaces, with embedded touch controls that actually work.

Cruising north, the Prime is nearly silent when under petrol power, although there is a bit more tire noise than I expected. Part of the high fuel economy equation means having tires with low rolling resistance and they do tend to be a bit noisier than some tires on the market. As I slowed for each town along the drive, the engine would shut down and the only sound to be heard was Lithium on Sirius XM.

By the time I had reached French River, the trip odometer was showing 439.8 km with just ¼ tank of fuel used for an average of 3.1 L/100km. So far, so good. If I could keep this up, the Prime and I would reach the advertised economy. If of course, a charging solution could be found at The Lodge at Pine Cove.

One of the beauties of the Prius Prime is the claim that it can be fully charged in a reasonable time using a regular 110v household outlet, where some EVs require a 220v connection if one is expected to get a full charge in under a week.

A helpful member of the lodge staff kindly unwound a very long, heavy duty extension cord and ran it from part way up the dock to the parking lot so that I could plug in. I couldn’t help but think of the scene from the TV show Ozark, where a dock was wired up as a weapon. In this case, the current was also effective at doing its job and the Prime was charged and ready to go the next morning.

The drive home the next day was smooth sailing, although the fuel consumption climbed to about 3.6 L/100km by the time I reached my driveway, with a ¼ tank remaining. 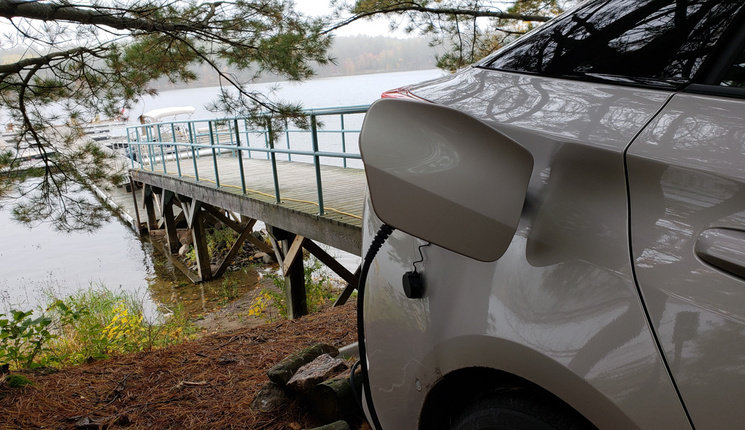 I finished out the week, mostly driving around town, never needing to plug in during the day, although I did a couple of times when a free charger presented itself during my travels.

The final tally, after seven days of driving, with a round trip to Ontario’s north, was 1,055.8 km, with an eigth of a tank remaining. The Prime consumed 3.2 L/100 km during that time. I am convinced that if the battery was charged nightly, I could have driven another whole week around town before the low fuel light appeared.

In a world where there is very little truth in advertising, Toyota’s claim of 1,035 km per tank is no joke for the Prius Prime. During my time with the svelte sedan, I drove it normally, not employing any silly hypermiling techniques. I drove with the full light system on most of the time. I drove with all of the creature comfort devices turned on all of the time. I drove it more than 800 km at highway speeds. The Prime, quite simply, delivered fuel economy as advertised.

The big question for many who are not proponents of EV technology is whether or not the elevated price of entry can be recouped over the life of the vehicle when reduced fuel costs are factored in. That is a tough one here for a couple of reasons. First off, there isn’t a gasoline-powered equivalent vehicle in Toyota’s fleet that the Prime can be compared to.

The iconic Corolla is the closest in size, with a starting price of just under 17 grand, while the larger Camry kicks off at almost 28. A base model Prime rings in at $33,990 while our fully loaded tester totals $38,570. 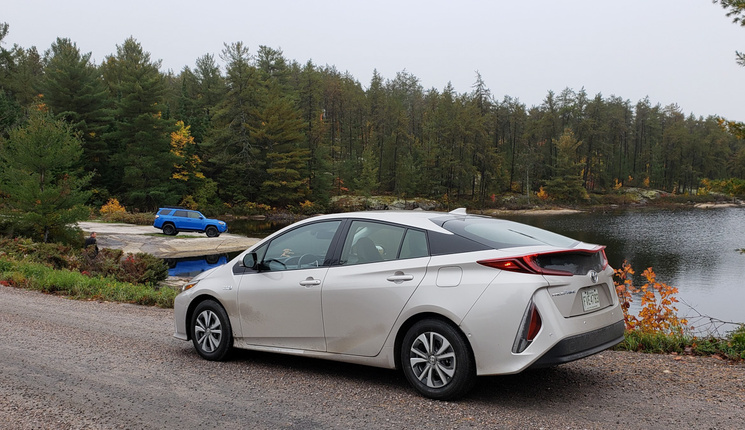 Even though they are an apples to oranges comparison, let’s do this by size. The base Prime costs fully double what a base Corolla does. Government ratings show that the Corolla has an expected fuel economy of 8.4/6.5 (City/Highway), which we can average out to, say 7. That gives the Prime an edge of 3.8 L/100 km based on my experience. If we consider an average of 20,000 km travelled in a year, and use $1.20/L fuel cost, the Corolla will cost $912 a year more in fuel costs to operate over the Prime. That means that one would have to drive a Prime for 18 plus years to see savings over a Corolla. Call me crazy, but I don’t think that is ever gonna happen.

To be totally honest, another thing that is never going to happen is a Prius Prime buyer cross shopping a Corolla. Prius has become a brand unto itself, having proved to eco-conscious consumers (and those who want to impress the neighbours) that Prius models are economical to operate and offer superior reliability since 1997. That perceived economy and reliability have created unprecedented consumer loyalty while a certain level of aspirational influence has also come into play.

What would be more likely would be a Camry owner cross shopping a Camry hybrid, but that is another story for another time.

With modern, sexy styling, a quiet comfortable ride and a premium price tag those looking to purchase a Prius Prime can be confident in knowing that the little sedan delivers real-world fuel economy, as advertised.