Join the Conversation (0)
Make no mistake, the upcoming all-electric Volkswagen ID.4 is not only targeting fellow BEV crossover models, nor primarily the supply-limited plug-in Toyota RAV4 Prime hybrid – or even the somewhat ‘electrified’ RAV4 Hybrid (if it still needs gas to run, how ‘electrified’ is it, really?)

No, the ID.4 is largely targeting the heart of the compact SUV market in Canada: well-equipped RAV4 and Honda CR-V models, while at the same time promising to become an instant value leader in the pure battery-electric crossover space. And though the first Canadian ID.4s are not scheduled to arrive until late September (at the earliest now) in B.C. and Quebec, it has been on sale for a few months in the U.S., which is where VW Canada secured this U.S.-spec ID.4 Pro model equipped with the $8,000 Statement package. 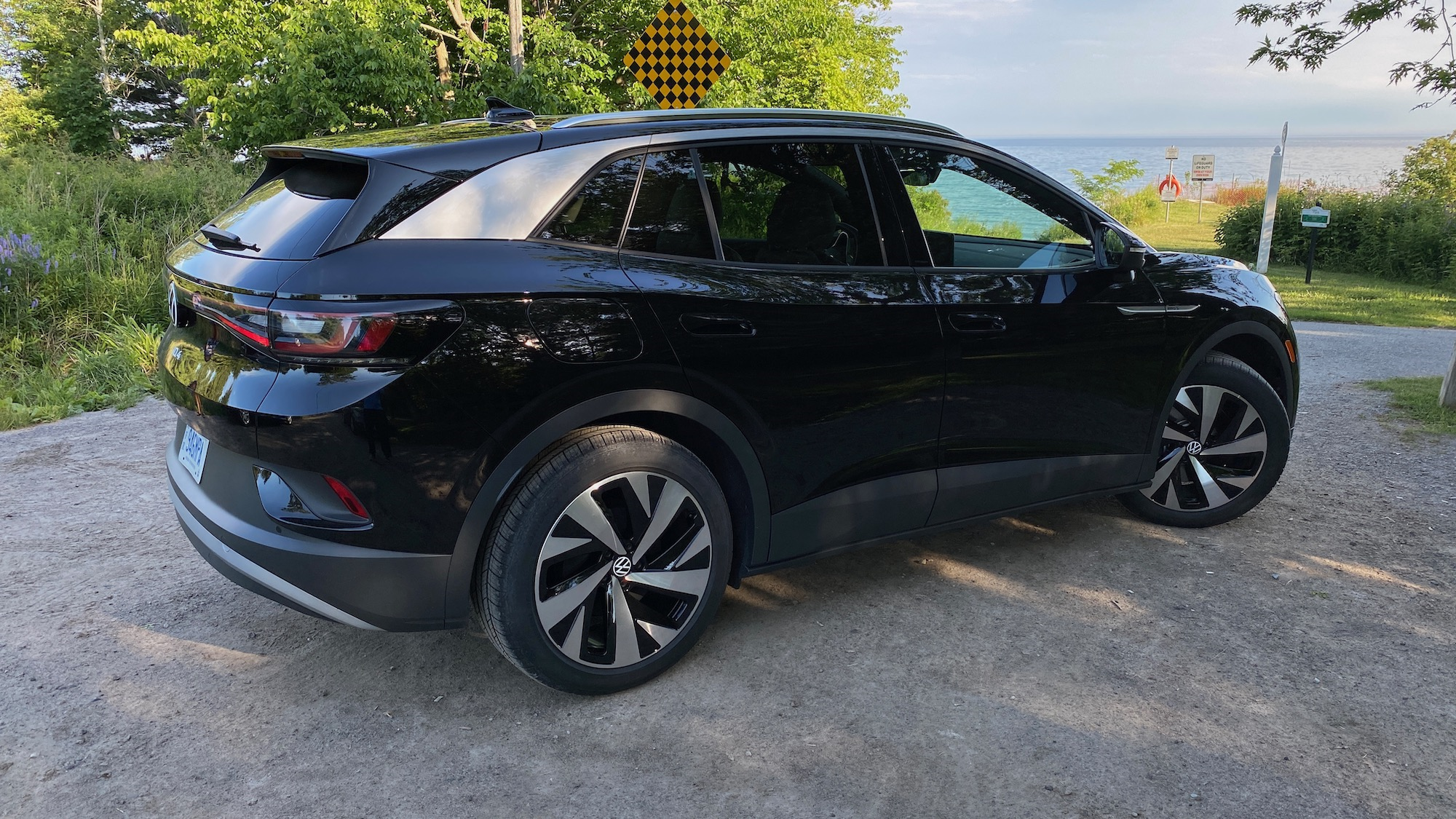 It only differs in the heated windshield and heat pump that will be standard here, but this test unit’s in high demand, VW Canada’s cheerful PR rep noted, so drive carefully.

Thus clearly jinxed, the day after the ID.4 arrived – BAM! – someone rear-ended it while we were stopped at a red light.

Everyone was fine, including my son in the passenger seat. “I was looking the other way for oncoming cars,” the remarkably calm and apologetic driver explained. His Honda Fit’s nose, fender and hood had dramatically folded in, while the ID.4 managed to escape with a gash to the rear lower trim, a couple taken out rear parking sensors, and the lower silver trim now sagging off the unpainted black trim under the unscathed rear bumper.

The ID.4 was still fully drivable, and after a quick waterproof tape job of the lower trim piece at home, this tough little tester was just as quiet in the city and on the highway as before. The rear back up sensors on the left rear side actually still worked, and the only reminder from the driver’s seat of the taped-on right rear lower trim was the occasional ‘Backup warning unavailable’ message that popped up. 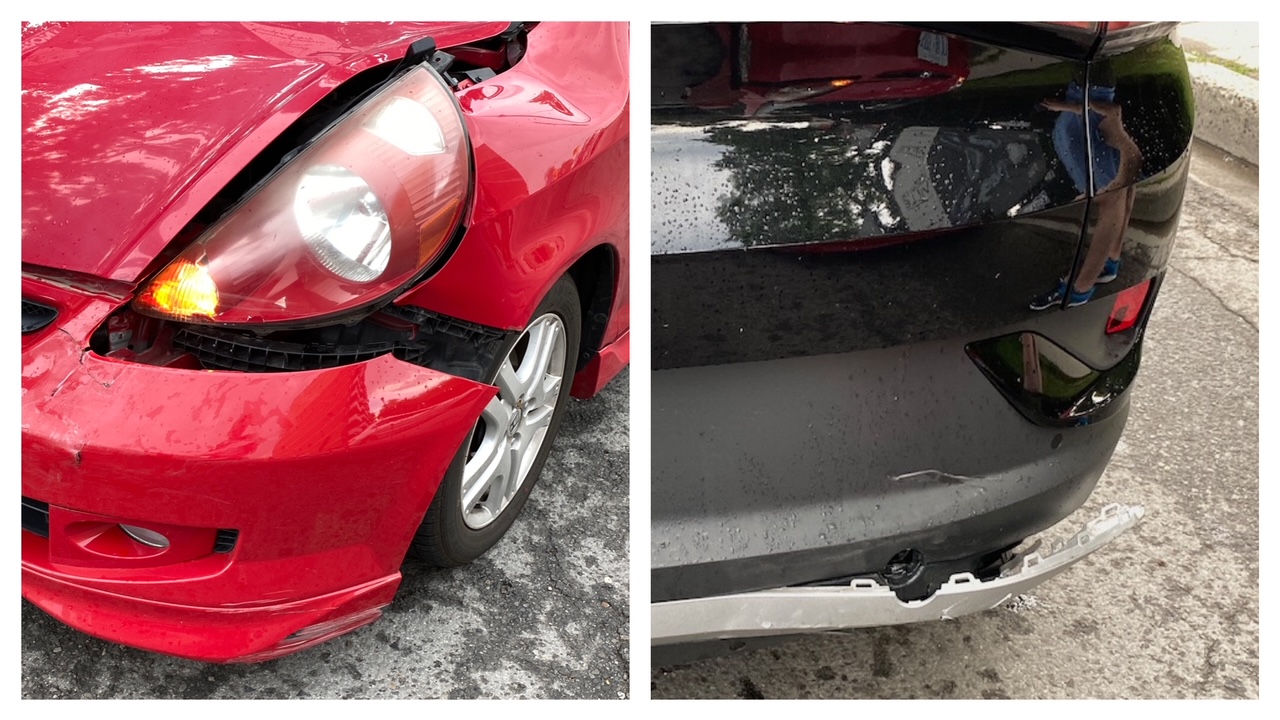 Luckily I had taken all my exterior photos the day I picked it up, and there seemed no other collateral damage, so I filed the accident report, and kept testing VW’s forbidden electric fruit SUV for my allotted days to see how it stacks up against both its electrified and gas-only competition.

The truth is, pretty damn well – especially against the near-equally priced RAV4 Prime plug-in hybrid, as well as the RAV4 Hybrid, with a much more modern interior design, and unique luxury features not even available on the pricier Lexus NX 300h hybrid too.

Looking at EV-only rivals, the ID.4 is not the least expensive compact crossover BEV, a title held now by the smaller, front-drive-only 2022 Chevrolet Bolt EUV that starts at roughly $40,000, and has started arriving at Canadian dealers. The much smaller and less sophisticated inside Hyundai Kona EV and Kia Niro EV crossovers still start just under the $45k mark, which makes the base ID.4 seem a notable bargain.

That’s because the ID.4 offers much more people and cargo space than either of those Korean crossovers or the Bolt EUV, and comparable to the RAV4. The ID.4 is just a smidge smaller in most dimensions than VW’s own gas-only Tiguan, which as one of the largest in the class, also offers an optional third row of seats.

The base rear-wheel drive ID.4 Pro starts at $44,995, but keep in mind this is before the $5,000 federal rebate for BEVs that all these electric crossovers are entitled to, plus provincial rebates of between $3k-$8k are available in Quebec, B.C., the Yukon and now in all of Atlantic Canada.

This RWD version actually comes impressively equipped, with standard heated seats, heated steering wheel, satellite radio, advanced adaptive cruise, four USBs, a heat pump which helps improve the ID.4’s range in colder weather (unlike in the U.S., where it’s not currently offered), and front and rear parking sensors. This is top trim equipment for many gas compact crossovers, though most of them admittedly start at much closer to the $30k mark in Canada.

This particular tester had the optional Statement package, which for its hefty $8,000 price, adds a huge laundry list of high-tech comfort and infotainment features, giving the ID.4 the feel of an electric Audi more so than a VW. Massaging and power front seats, leatherette seating surfaces, gesture controls, an all-glass panoramic roof, LED interior lighting with a choice of 30 colours, and projected puddle lamps all add to this futuristic luxo-car feel, though strangely the projected lamps didn’t display the VW logo or ID.4 name, but a more stylized if ambiguous design.

There’s also an LED line at the base of the windshield that provides signals to when you’re doing things: green when charging, white if speaking to it, and points you in the direction you want to go when using Navi directions, etc. It’s yet another nice little high-tech touch. 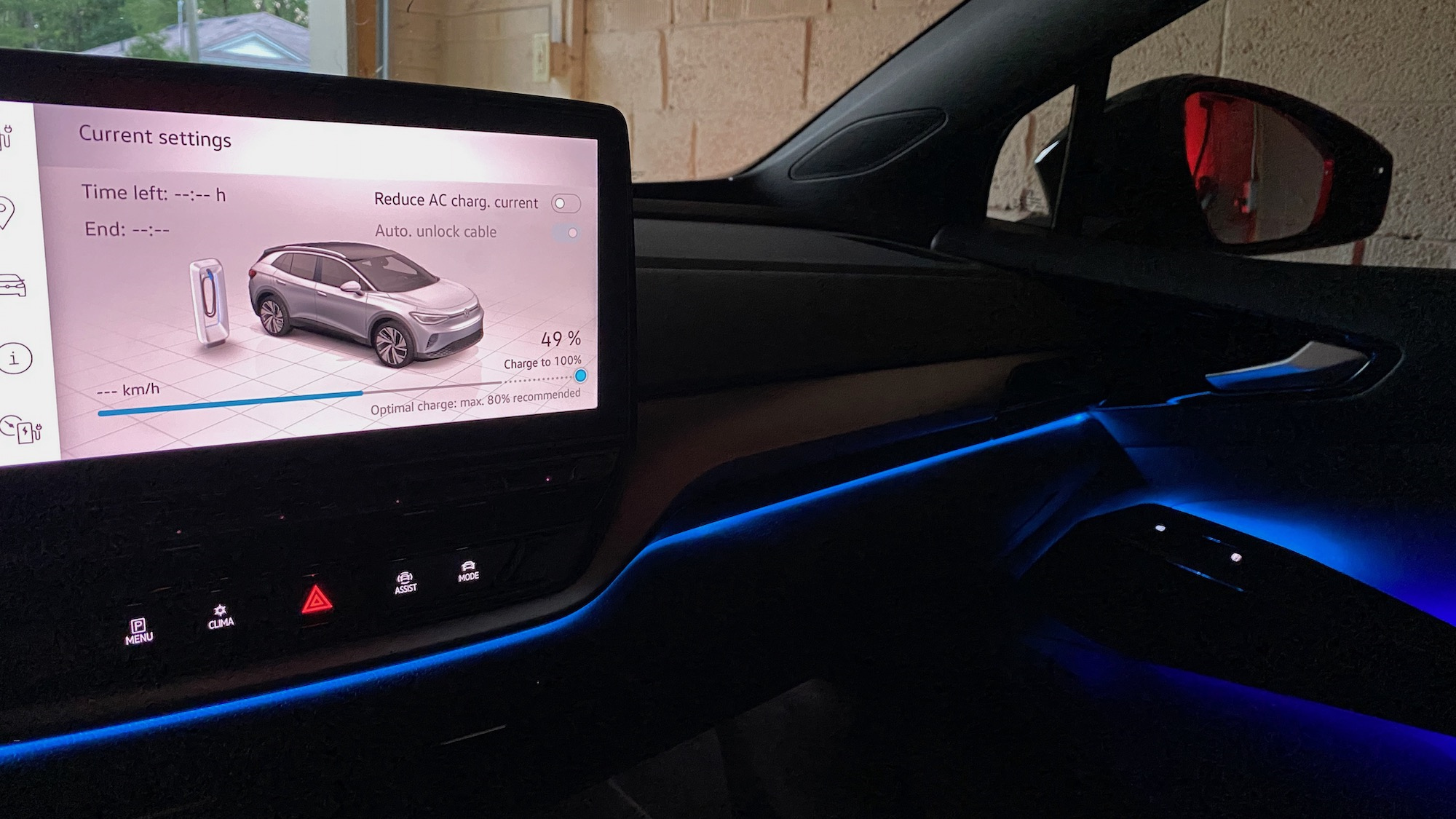 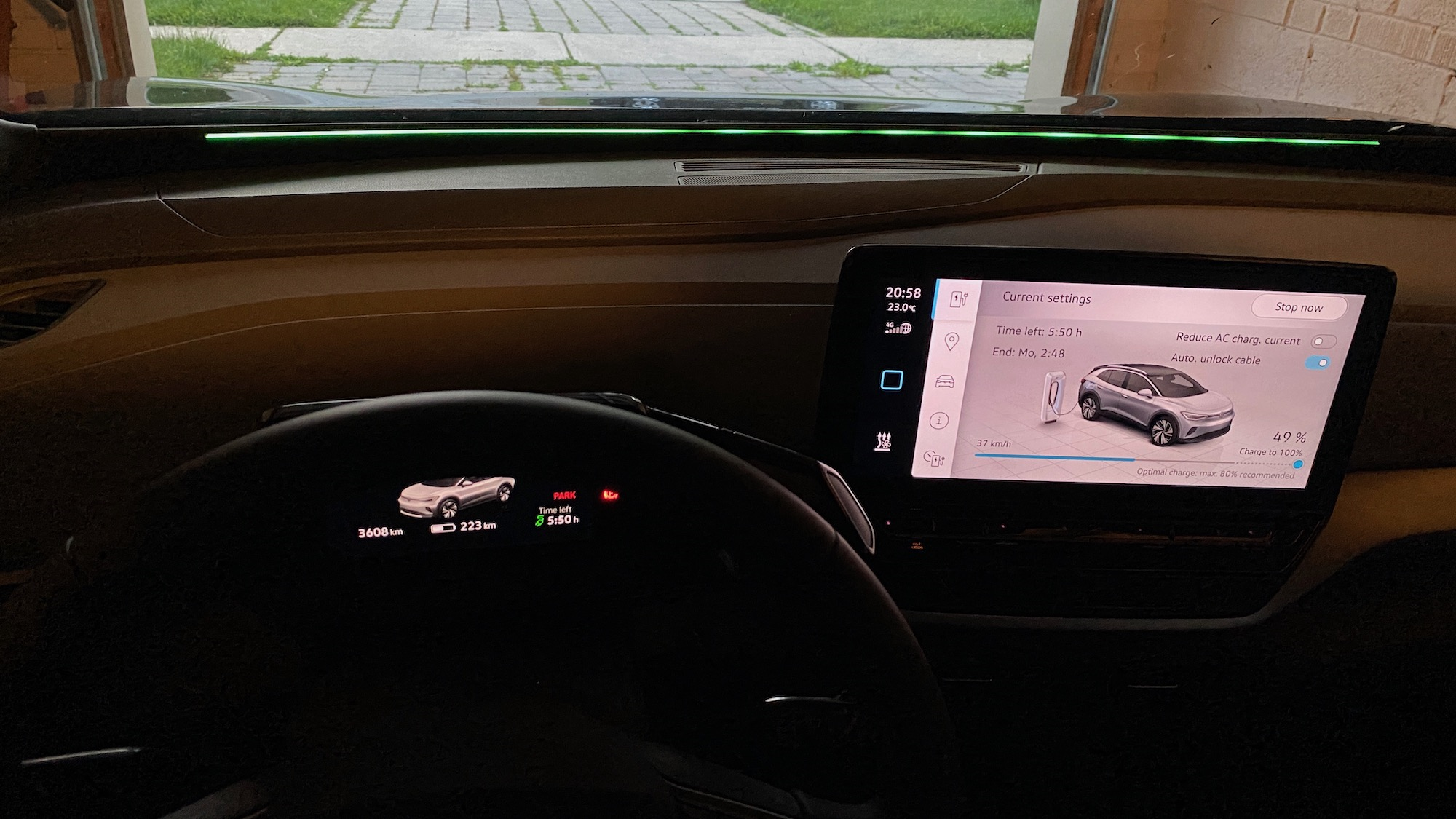 Going more old school, having four cup holders up front is a trick taken from minivans, but also comes in very handy. As does the space under that floating front console. And the folding front seat armrests we’re very comfortable on a long cottage trip.

This ID.4 also didn’t need to be turned on or off, as the Statement package also includes the ability to start or stop the car as soon as you get onto or out of the driver’s seat, respectively. There is a hidden ‘Start/Stop Engine’ button on the steering column, despite no engine in any VW ID product. Climbing into the ID.4 for the first time after it had been parked in the blazing summer sun reminded me of a few quick negatives of even the Statement-equipped ID.4: a) it’s not easy to blast the AC and step out of the fire ant seats while the interior cooled off, and b) there’s no cooled seats, unlike the loaded Korean crossover EVs.

Granted, you could start up the interior climate controls remotely with the app, if you had it set up. Once seated inside, this early US spec vehicle didn’t make a great first impression in other ways: the screen was laggy, so you’d swipe, it wouldn’t go, then it would catch up on swipe two - then go too far.

What’s it like to drive? There’s the usual smooth and silent EV power, but this 201 hp version is not ‘blow your hair back’ quick, though it does become noticeably quicker in Sport mode. The upcoming all-wheel drive version will be roughly 300 hp, and should help it feel closer Mustang Mach-E non-GT acceleration, though it’s fine for every day use. 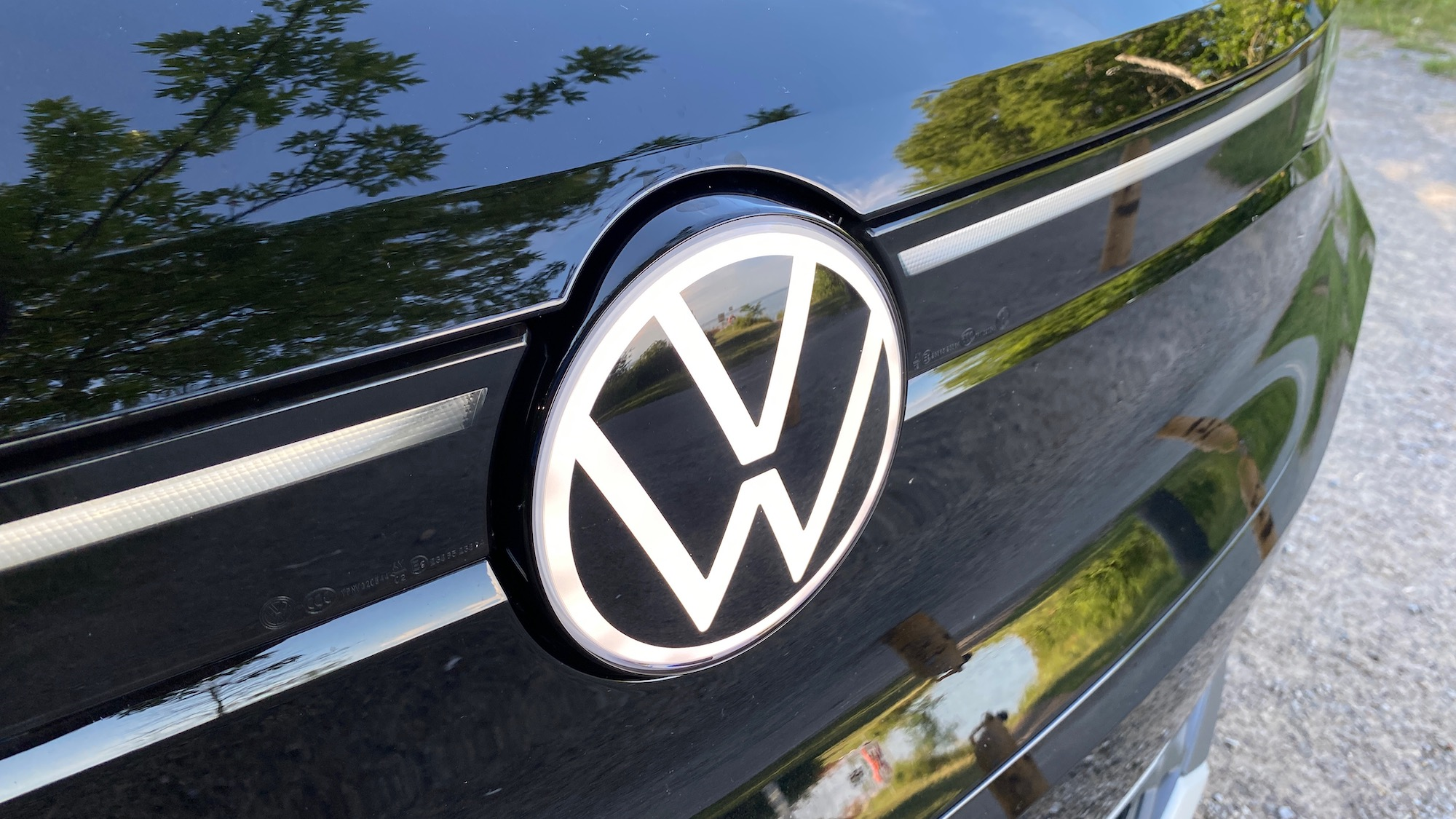 All ID.4 models will come with a healthy 82 kWh lithium-ion battery (77 kWh usable), and though it’s rated to be able to quick charge at up to 125 kW, I didn’t manage to see more than 79 kW, even at an Electrify Canada station rated at up to 350 kW. But it’s still much quicker than the Bolt or the Korean EVs, all of which are limited to under 60 kW max.

The ID.4 is slated to arrive early this fall, at least for early reservists in Quebec and B.C. where EV sales have traditionally been strongest, which Volkswagen has prioritized because of its limited supply of German-built ID.4s until its U.S. plant comes online in or around mid-2022. Overall the ID.4 is more comparable in feel and interior tech to the Ford Mustang Mach-E (base $50,495) and the Tesla Model Y that currently starts around $70,000, and it will be very interesting to see how it compares in features versus the upcoming Audi Q4 e-tron, which will be built on the same platform.

Sure, compared to just under $30,000 for the bare bones front-wheel drive versions of the RAV4 and CR-V, the ID.4’s $55k as tested price is a major price discrepancy. But when you consider all the extra equipment on those mainstream crossovers needed to even approach those in the typically well-equipped EV models, the actual out the door prices are much closer – especially in rebate provinces. By the time the ID.4 is available in all provinces, it promises to be a luxury and value-laden proposition.