Join the Conversation (1)
Gatineau, QC – I tend to be an optimist. When I saw the invitation to drive the all-new 2022 Toyota Corolla Cross, I immediately envisioned a Corolla hatchback riding on rally-tuned suspension with a heavy helping of GR go-fast goodness. A “safaried” World Rally Corolla? Sign me up!

Of course (hopes be damned) that’s not what the Corolla Cross actually is. Toyota knows that the consumer audience for niche vehicles is just that: niche. Instead, the 2022 Corolla Cross is a new subcompact SUV, conceived to be a volume seller. To that end it has been designed and engineered to appeal to the practical needs of rational minds (not us wannabe Sébastien Ogiers).

If that philosophy sounds familiar, it’s likely because it was pulled from the same vision-board that birthed the original RAV4 – a vehicle with the high-riding visibility, increased cargo space, and (optional) all-wheel-drive of an SUV combined with the maneuverability and fuel economy of a compact car. And, because the RAV4 has grown with age to cast a much larger shadow, the Corolla Cross was built to fill that reemerging need.

Draped in Blue Crush Metallic, the all-wheel-drive (AWD) LE model I’ve been given the key to wears its corporate countenance proudly. It’s not nearly as rugged as some of Toyota’s SUVs nor is it as elegant as others. These are defining traits of rationality, to be sure, yet designers have ensured it sets itself apart via extra creases that have been pinched into its profile, bespoke headlights, and a sleek-ish silhouette.

Inside, the Corolla Cross is roomy enough for four adults although rear-seat passengers may feel a bit wedged in. The front seats have been revised with relocated springs -- to enhance comfort and stave off fatigue – and I found the one behind the tiller to be a fine place to spend a few hours. Outside of this change, the remaining interior bits have been plucked straight from the lower-riding Corollas, which is to say you have everything you need and very few extras that you don’t.

Still, the front seats are heated, as is the steering wheel. Both Apple CarPlay and Android Auto are present and accounted for although only via wired connection. Controls for the HVAC system feature physical buttons and knobs for ease of use and the 8-inch display (available on LE and XLE models) renders a clean and clear graphical interface. 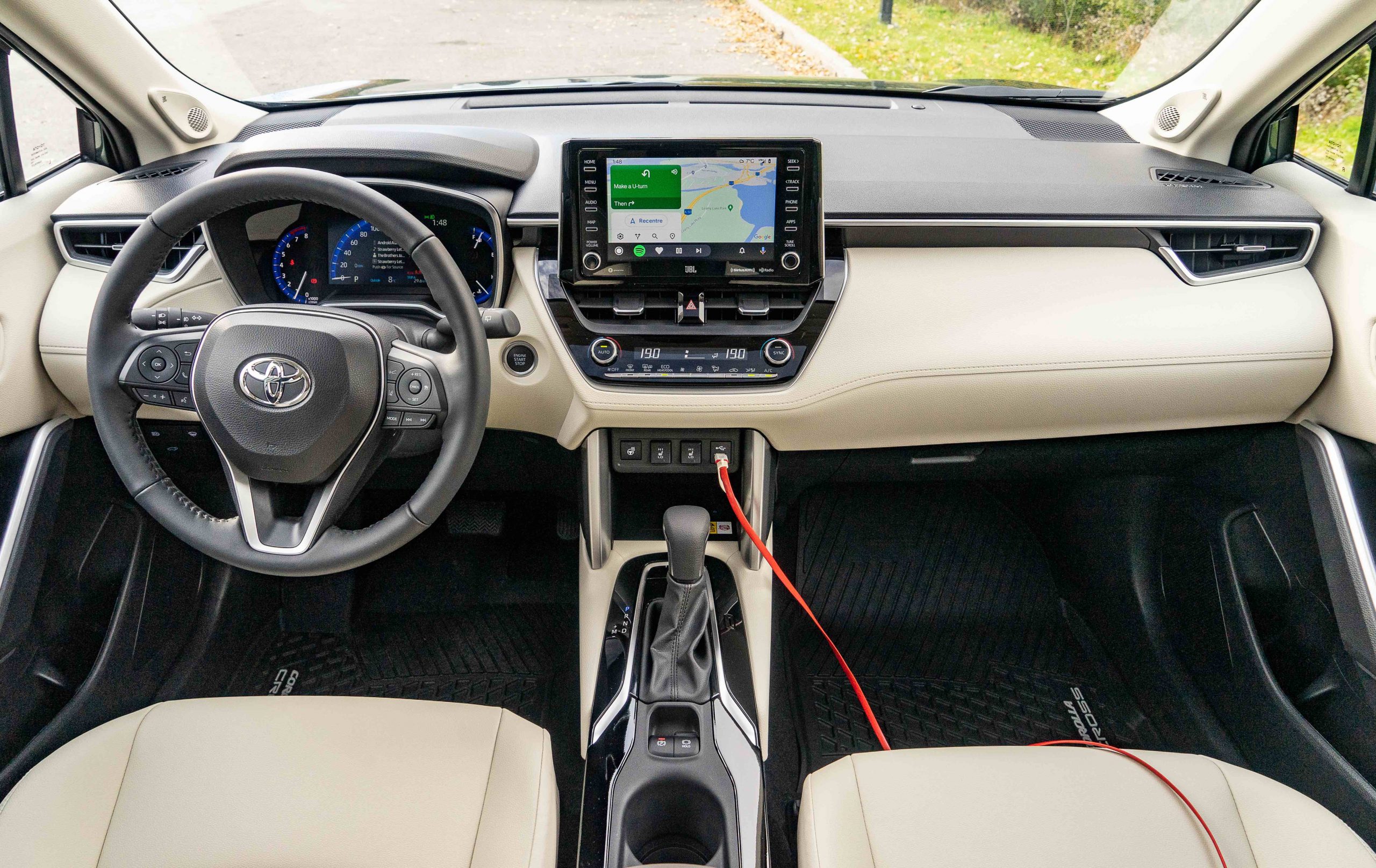 Personally, I preferred the look and feel of the top-trim XLE model, save for its digital dash in lieu of the LE’s analog set-up. The inclusion of a moonroof is always appreciated and the two-tone SofTex synthetic leather upholstery breaks up an otherwise dim, grey cabin. The exterior of the XLE benefits from a set of fog lights and 18-inch alloys. Painted in Cypress, it makes a case for green’s recent revival.

Following the winding roads lining the banks of the Gatineau River, the Corolla Cross provided a relaxing perch to enjoy the scenery. Built on the TNGA-C platform that underpins the Corolla sedan and hatchback, this elevated execution isn’t quite as nimble, but that’s to be expected.

In AWD format, the Corolla Cross uses fully independent suspension at all four corners. Ride quality is compliant and smooth but the vehicle can be unsettled by cracked pavement and it will wallow when pushed.

Equipped with Toyota’s Dynamic Force 2.0-litre, four-cylinder engine, the Corolla Cross has 169 horsepower and 151 lb-ft of torque, regardless of trim or drivetrain. Mated to a continuously variable transmission (CVT), acceleration is a bit pokey, to say the least. From a dead stop you will quickly learn to mash the gas to overcome its lethargy.

Once on the roll, a switch to “manual” mode will help with driver engagement and I will admit to having some fun throwing the Corolla Cross into some tight corners. Of course it will never behave dynamically enough to inspire the need for a co-driver, and there is a definite tradeoff: the droning sounds from the engine and transmission that permeate the cabin quickly become annoying. 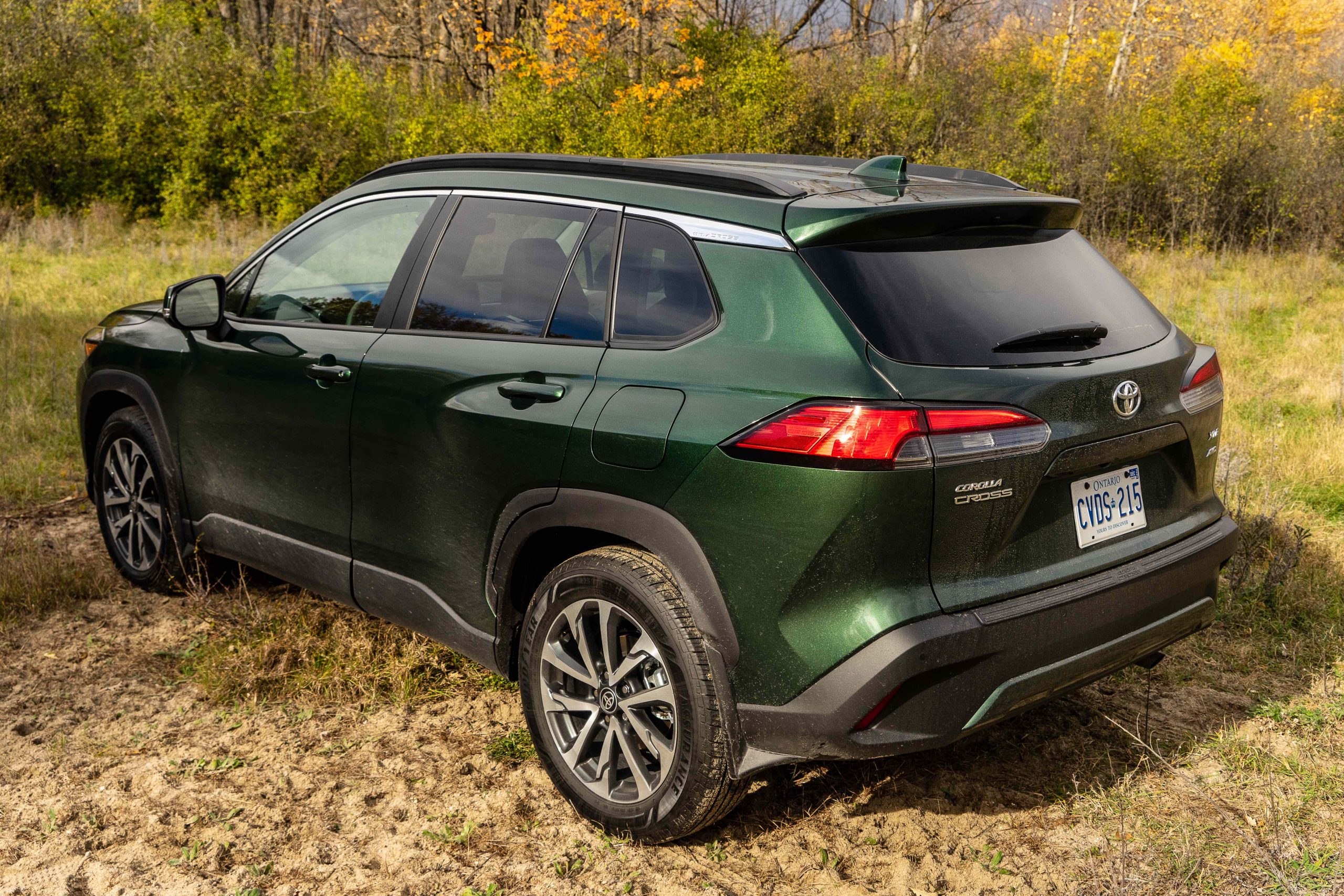 That alone would cause me to deeply consider upgrading to the XLE trim ($33,990). Thanks to the included 9-speaker JBL audio system, I could drown out the drone (and possibly the kids, for you interested familial types out there) and enjoy a more fulsome soundtrack for the second half of my drive. But aye, here’s the rub.

If the added amenities of the XLE AWD appeal to you, know that you could score an equally well appointed RAV4 XLE AWD for a mere $300 extra ($34,290). When you consider those extra bucks net you a 34 horsepower gain, a proper 8-speed transmission, some additional cargo space, and passenger comfort while only sacrificing 0.3l/100km and casting barely a 51mm larger shadow, the most rational of us would inevitably opt to get more for what is arguably less.

Except that I’m wrong.

The truly analytical out there will quickly suss that the price delta between LE trims of those same vehicles is over seven-times as large ($2,200). And that’s because the Corolla Cross LE AWD is an honest vehicle. Much like the Corolla itself, it eschews frivolous desires for utilitarian needs. It knows that it's a budget friendly vehicle built to provide the high-riding visibility, increased cargo space, and (optional) all-wheel-drive of an SUV combined with the maneuverability and fuel economy of a compact car, to the masses. No more, no less. That level of honesty is something to be appreciated these days and I reckon that prospective buyers will see the logic at work.