Shaking up the establishment.

Join the Conversation (0)
If you would have told me that of all the Japanese and Korean auto manufacturers that have been proliferating in Canadian markets for decades now that it would be Hyundai that would be the first to come out with a proper performance line of their own, I probably would have told you that you were living in a dreamworld.

Sure, Honda has offered performance trims – think Civic Si – and what you could call fully-fledged performance models like the Civic Type R. Mazda offers the MX-5 and has sprinkled Mazdaspeed love on a very light selection of models (but hasn’t done so since 2013) while Toyota’s TRD stuff has mainly been cosmetic.

Hyundai, though, seems to have spotted a gap in coverage here because they are going all out with their N division and not just offering fun road cars, but going racing in top-flite leagues like the World Rally Championship, TCR (touring car) Pirelli World Challenge, and TCR Michelin Pilot Challenge.

So, what to do when you’re going racing and it’s time to better monetize the effort? Well, you develop some super cool road cars with a little flare, inspired by those racers.

Enter the 2022 Hyundai Elantra N. It comes powered with the same 2.0-litre turbocharged four-cylinder the race car gets, aaand…well, that’s about it. But that’s OK, because there’s plenty more to the N package that turns this from your standard Elantra – Elantra N Line, if you will – into something very different.

It starts with the Performance Blue paintjob (likely called “powder blue” anywhere else), which is unique to the N models in Hyundai’s line-up. That gets complimented by red rocker panels no matter which of the six available colours you select, as well as unique 19-inch wheels shrouding red brake calipers, less-than-subtle (but very cool) trunk spoiler, blacked-out front fascia and matching blacked-out wing mirrors. Add the functional front bumper cooling ducts and fact that the Elantra N rides lower than its siblings, and you have one purposeful-looking performance compact. Oh, and how can we forget the “TCR” engine sound setting and exhaust that’s been tuned to “pop” like a race or rally car on overrun – take that, Civic Si. 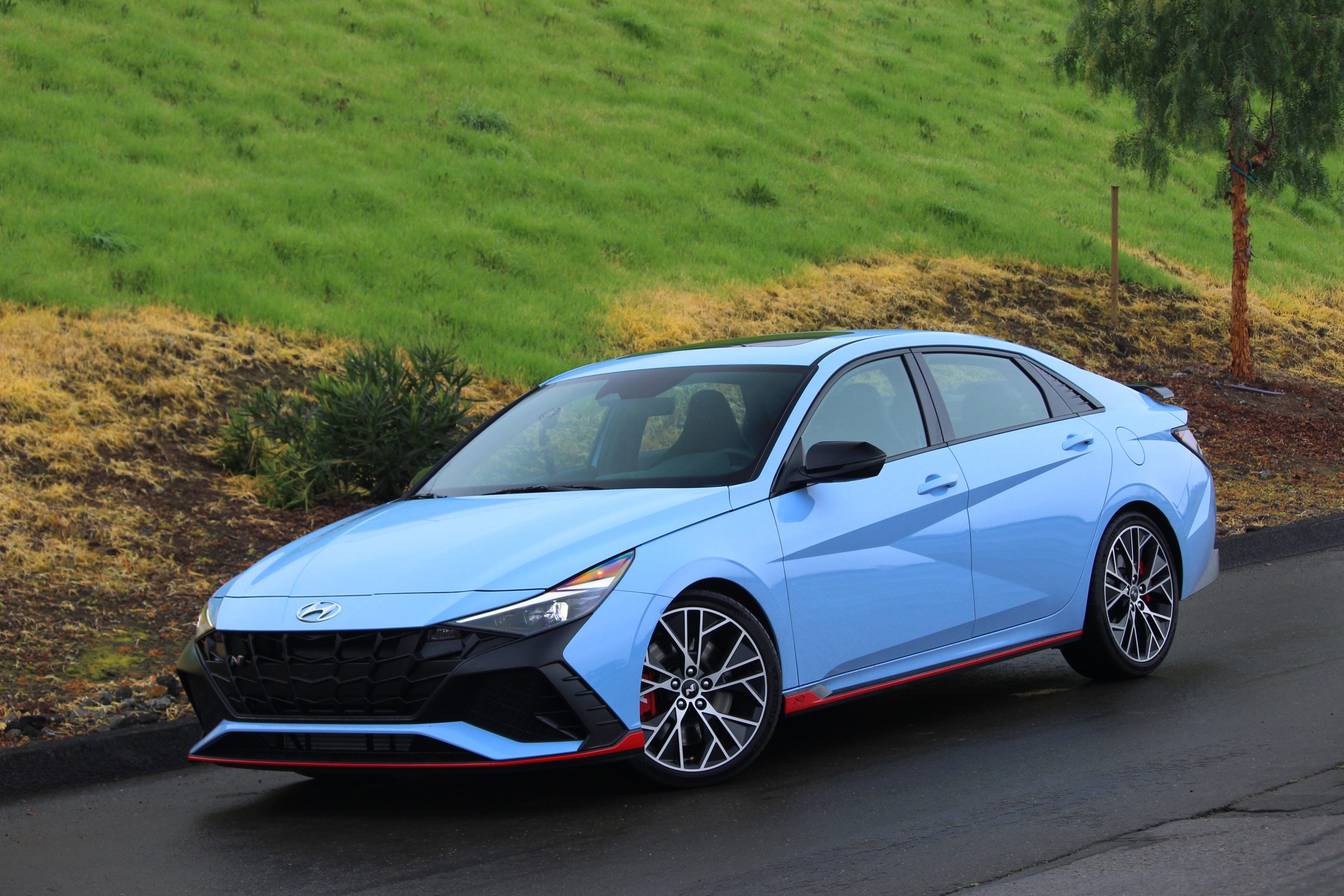 Inside, the Performance Blue theme continues no matter which exterior colour you select, as it’s found sprinkled throughout the cabin. The contrast stitching on the seats, the “N mode” buttons on the wheel – more on these in a minute – and gearlever insert all come finished in the colour. Other N-specific interior bits include an all-new “performance” mode for the standard digital gauge cluster as well as a performance data-tracking app on the main 10.25-inch infotainment display.

There are also special lightweight performance seats (that, it should be noted, are manual-adjust only but do come heated) as well as a red button on the steering wheel marked with “NGR” on automatic models, and “REV” on manual models. 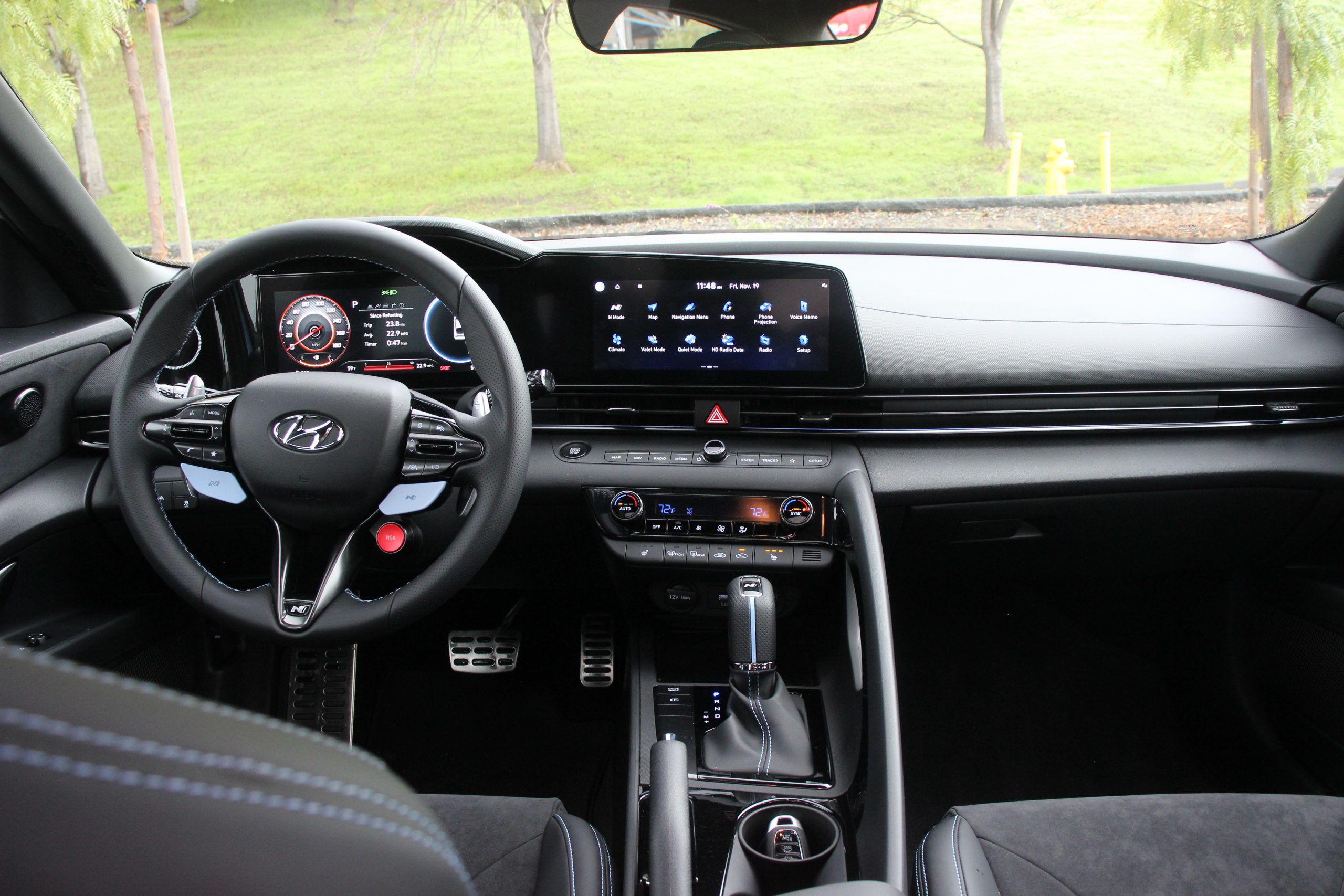 On cars equipped with the eight-speed dual clutch automatic, that button stands for “N Grin Shift” – as you do – and provides a 10 horsepower boost (for a total of 286) for 20 seconds. If that sounds familiar, it’s because you’ve probably heard of similar feature in push-to-pass technology found in various race cars. In manual cars, that button activates or deactivates rev-matched downshifts.

Even without NGR activated. this Elantra and its 276 hp (plus 289 lb-ft of torque) is no slouch.

Power comes on with little delay – peak torque arrives at 2,100 r.p.m.,  and is maintained all the way through the 4,700 mark – and if you’ve selected one of the more aggressive drive modes, the shifts in automatic cars are banged home lickety-split – ahh, the joys of a dual clutch transmission. You can of course choose between different drive modes – Eco, Normal, Sport, N -- or customize your drive mode and pair them with those N buttons, just like you would in a car from BMW M. If that’s not enough, there’s even a launch control system. You activate it through the new performance pages and when done, it will shave .3 of a second off your zero-96 km/h time, for a total of five seconds. 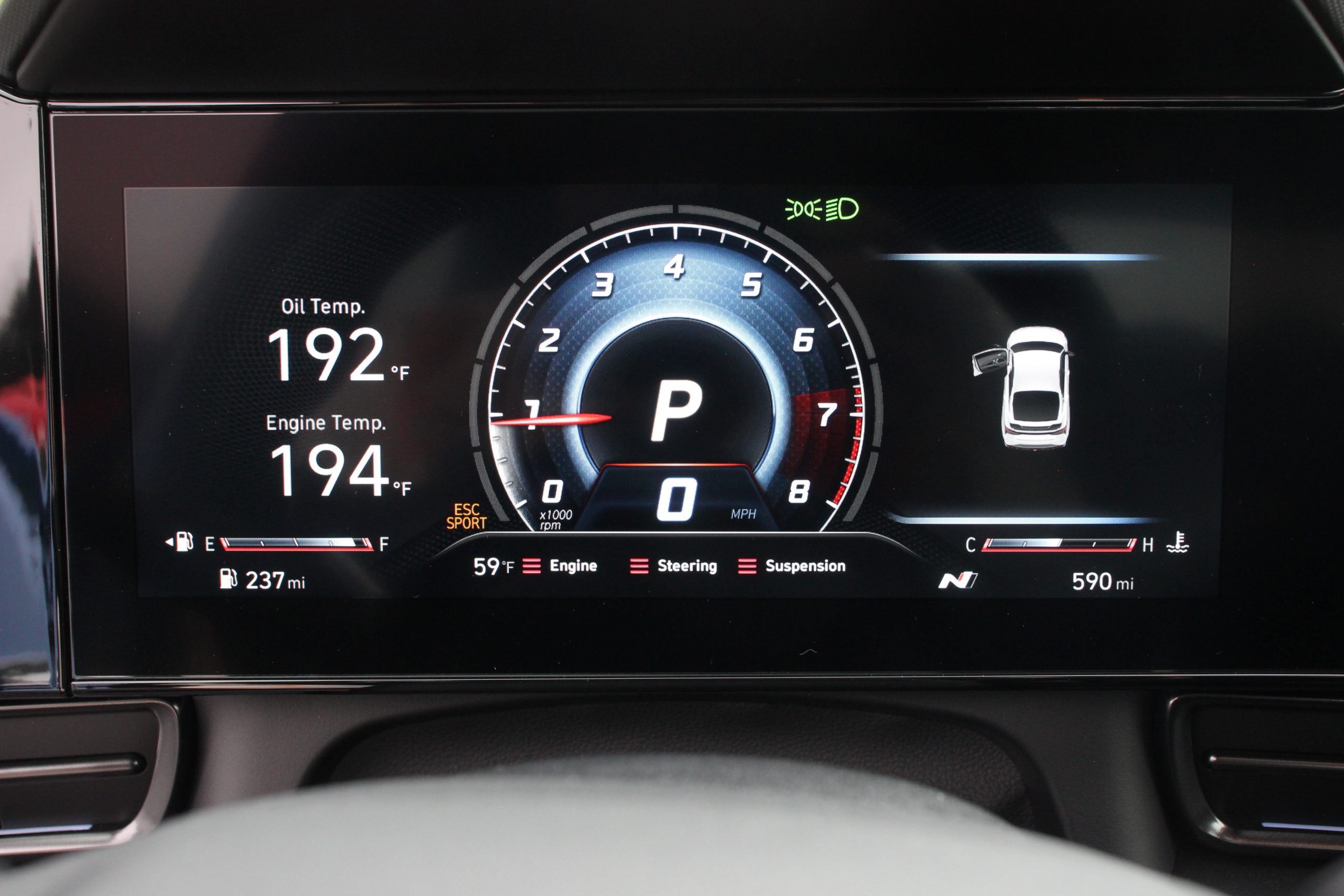 We also had the chance to sample manual-equipped models, and while I assumed that this would be a slam-dunk choice for me – manual over auto – I’m not so sure. The feel is a little rubbery, the throw a little long and I would ask for a more positive sensation when a gear engages. The auto is so darn fast, to, and you get NGR so I’d have to think a lot longer and a lot harder about the decision.

One thing that remains mostly constant regardless of your transmission choice, though, is how well the Elantra N handles. It gets adaptive suspension, electronic limited slip differential, bigger brakes, and a livelier steering rack than its stablemates – not to mention a brace behind the rear seats that increases torsional rigidity by 29 per cent – which all combines to provide the kind of handling hitherto reserved for the FWD GOATs like the VW GTI and that Si we keep talking about. 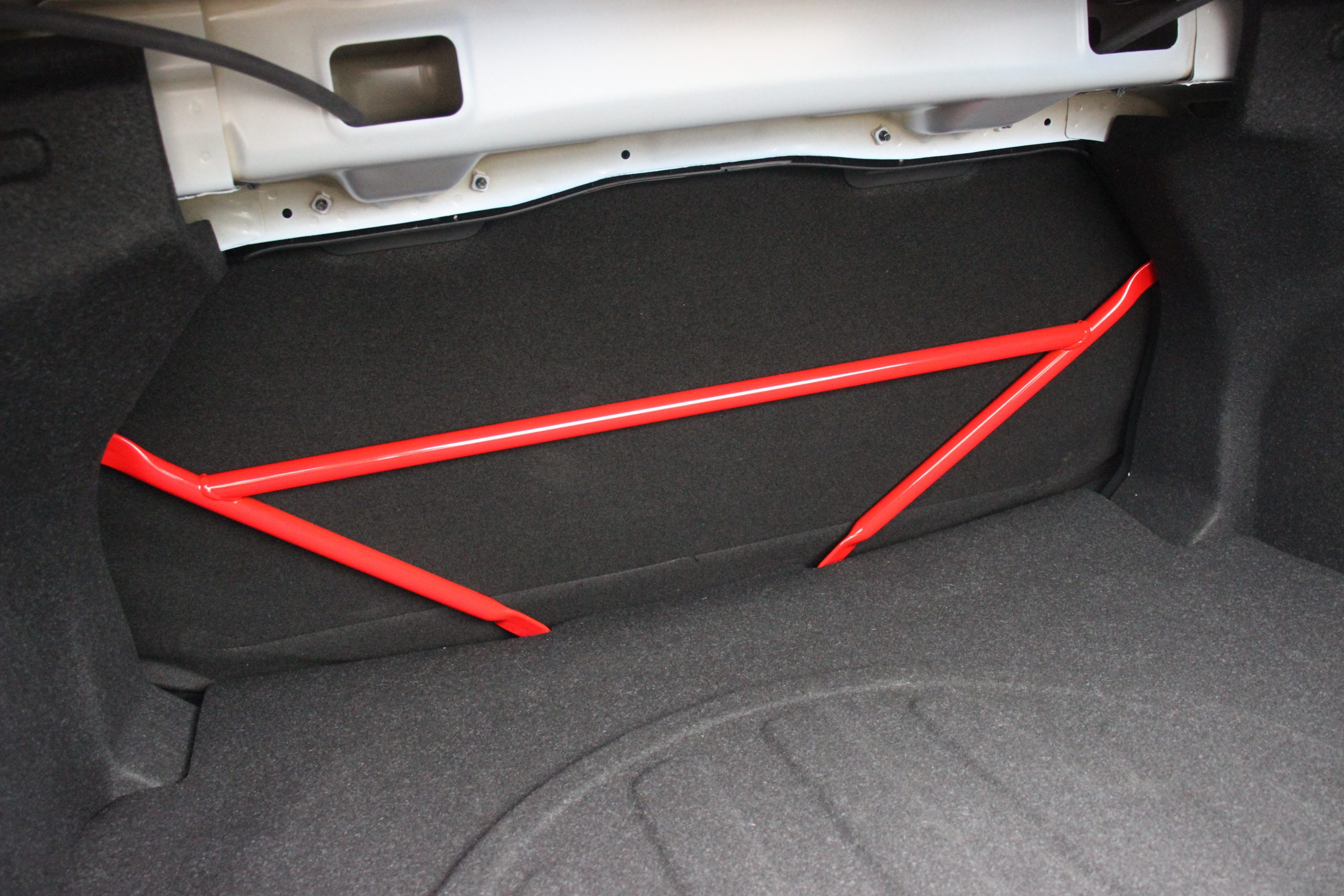 Instantaneous turn-in and precise body control are the words of the day here, and if you happen to start losing grip on that inside front tire, the eLSD reigns it all in.

We were given the chance to put the Elantra N through its paces on the Sonoma Raceway just outside of San Francisco and you can really feel all the chassis components working in concert here. Even on a damp track – a rarity for Sonoma – the Elantra was kept copasetic. Just as you’d feel that inside wheel spinning, the outside wheel would get the power it needs to pull you through. Aside from a slightly livelier tail then expected under braking – that throws the weight forward, reducing rear traction –partly due to the Michelin Pilot Sport 4S tires not totally jiving with the damp conditions, the Elantra was up to the task presented by a world-class race course such as Sonoma. 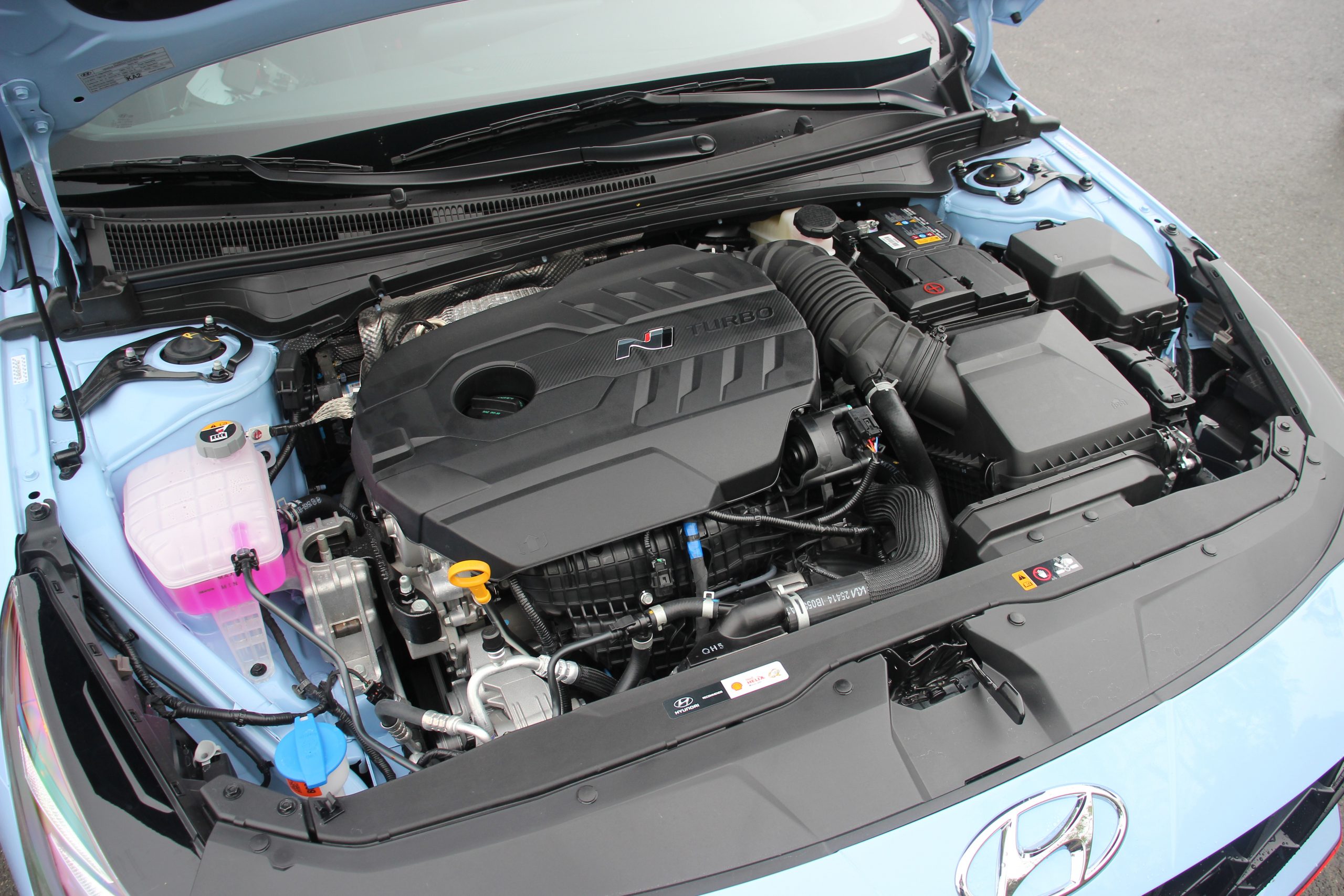 The truth that matters most in the rear world, though, is that more than being up to tackling a racetrack, the Elantra N is up to tackling the best of the best in the sport compact segment. It’s a segment with some well-established vets, but this Elantra N has the power and tech to shake that establishment.