Join the Conversation (0)
PALM SPRINGS, CA -- If you know anything about BMW’s current line-up, you knew that an AWD – or, in BMW-speak “xDrive” – version of the M4 was on the way, and making it official in a 2020 announcement was procedural, really. Every other BMW M model they offer has had the tech for quite some time, from the sedans, to the grand tourers, to (obviously) the SAVs. So the arrival of xDrive to BMW’s smallest M models (the M2 is on hiatus) was a self-fulfilling prophecy.

But that doesn’t mean it’s easy to accept.

After all, the M4 and its slightly more “aged” M3 twin are staples in the compact performance sedan world. Heck, you could argue that when the M3 debuted in the mid-80s it pretty much started the genre, especially here in North America. The formula back then was rear-wheel-drive or bust, as it has been until this year.  RWD is still available, though.

The M4 coupe is a car that has always – always – offered one of the absolute best drives you could get for under 90 grand (for 2022, the M4 with xDrive starts at $91,600, the M3 xDrive at $90,800 with two more doors). Not to mention if you want some practicality to go with your performance. 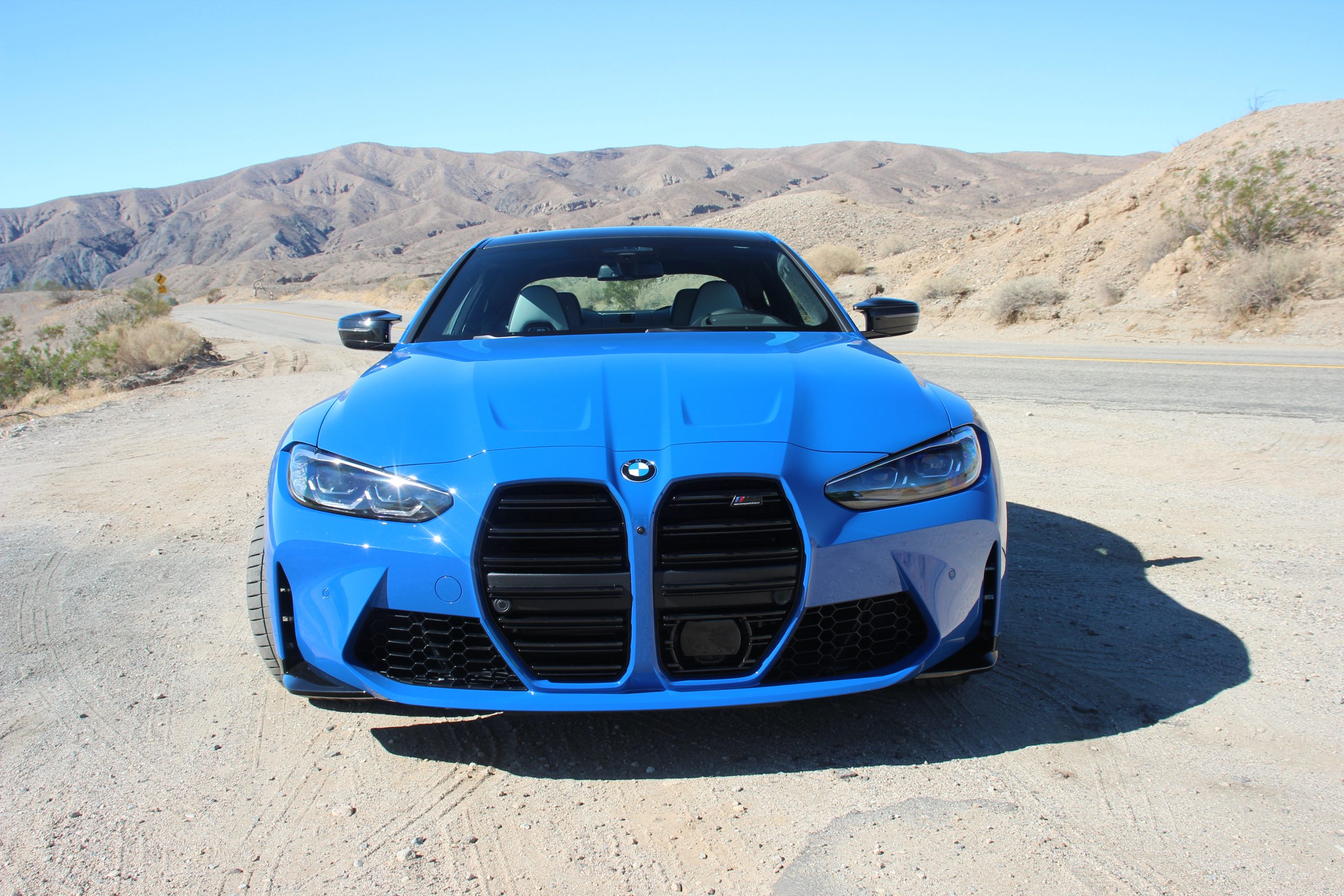 For 2022, power from the twin-turbocharged straight-6 is rated at 503 horsepower and 479 pound-feet of torque (that’s in Competition spec; non-Competition models get 473 hp and 406 lb-ft), which are big figures for a car that weighs less than 2,000 kg, even if you do opt for this xDrive model.

Speaking of Competition spec: it would be a crime to continue on without first talking about the styling which, believe it or not, isn’t dominated by the extra-size kidney grille that has pretty much been bulletin board material in everything written about the latest 3/4 Series since they debuted last year. Yes; it’s there, but it’s blacked-out so not quite as dominating. Not to mention that BMW aficionados will know that the 328 of the 1930s had a grille that extended from the edge of the hood to the pavement below so in a way, what we’re seeing now is simply a call back to where it all started for this line.

At any rate; the grille’s presence can’t be denied but there is so much more going on here. The perfectly-shaped wing mirrors finished in contrasting black to match the Competition-specific wheels, the wonderfully subtle trunk lid spoiler (also black), and centre-of-gravity lowering carbon roof, slightly flared fenders and perfect stance, big front intakes – all so perfectly proportioned and implemented. Throw on ultra-bright exterior paint jobs with names like “Frozen Orange” and “Isle of Man Green” and you have a genuine looker of an automobile.

Inside, meanwhile, the show continues – bright colours like Yas Marina blue with Sao Paulo yellow inserts to match the M4’s launch colour (bit extreme, that) or Kyalami Orange are draped over some pretty wild stuff like optional carbon-backed seats to match inserts on the steering wheel and atop the transmission tunnel. The red M1 and M2 buttons attached to the chunky wheel are also eye-catching and there’s a digital gauge cluster and big, widescreen infotainment display but come on; forget that and get your eyes on the road, right? 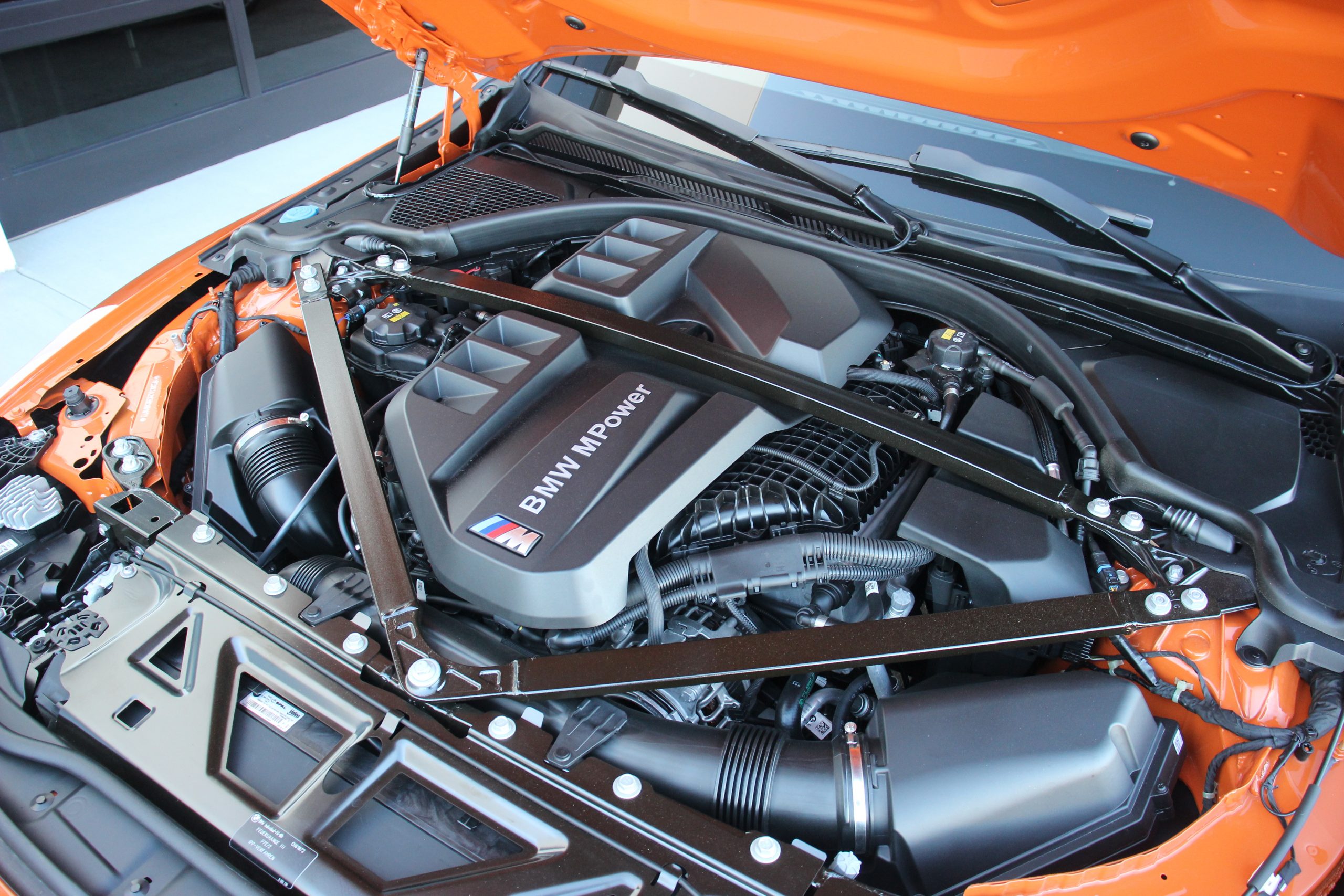 Indeed, in this spec, I fully expected the M4 to be more of a grand tourer but while out on the road there was some credence to that, on track at the Thermal Club race track in Palm Springs, you wouldn’t really notice it. That’s because like it or not, the transmission’s computers are smarter and faster than most drivers so switching gears happens so instantaneously with hardly any interruption to power delivery. So you’re coming to that next braking zone in short order and since the transmission changes down as quickly as it changes up, you can save your braking for a little bit later, a little bit later and a little bit later still.

The power delivery is right on the money. BMW’s turbo tech allows for some fast spooling and peak torque arrives at 2,750 r.p.m., with peak hp arriving as you let the engine stretch its legs that much more, on to a zero-60 m.p.h. time of about 3.5 seconds. Put simply, acceleration is hair-raising – in a good way – and that’s just the start of it.

Then there’s the xDrive. Like in the M5, you can “lock out” the front axle and get a rear-drive feel but I wanted to see what powering all four wheels could do.

And what it does along with the Active M Differential is help you snap through corners as power is shuffled from axle to axle, doing its best to help scrub understeer as you enter the corner, and pull you to the exit on-line and with gumption as soon as you tip back in. Yes, you will feel the added weight over the RWD model  -- about 45 kilos – but the power and handling is such that you learn to use that weight to help move you through turns. All the while, there’s the immense traction provided by the xDrive and Michelin Pilot Sport 4 S rubber. You’ll want to keep in mind, however, that you can’t get the manual box on xDrive-equipped cars, and xDrive is available only on the Competition model. 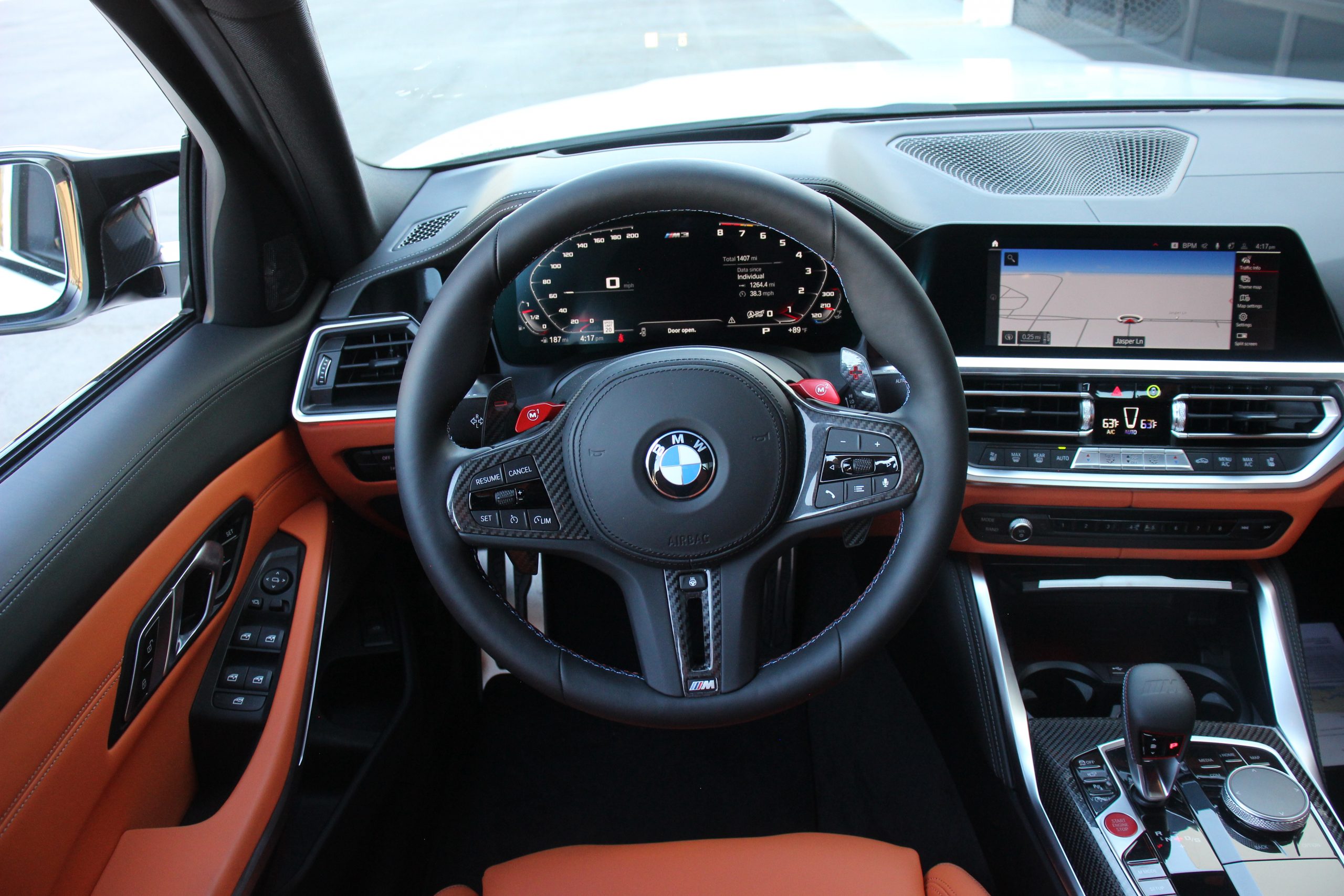 Indeed, the M3 and M4 have come a long way since “M3” could have been either a coupe or sedan, but the essence is still there. It remains an incredible handler, but now with performance that would’ve been supercar-spec back when the M3 first came out, and that cannot be discounted. To be able to get that kind of performance from a compact coupe or sedan? That’s almost – almost­ – priceless.