Join the Conversation (0)
The BMW 2 Series is crossing into its second generation for 2022, and it does so with all-new looks, a larger footprint and lowered ride height. There’s only a single model in Canada for the time being – the M240i xDrive that provides an eight-speed dual-clutch auto, turbocharged inline-6, and all-wheel-drive (AWD). The lack – for the time being -- of the RWD 230i version the US gets and a manual transmission will likely disappoint lovers of the older car. After all; many argued that the outgoing 2 Series  – especially in RWD spec, and especially in M2 form – was the best modern take on great fun sporting Bimmer sedans and coupes of old. There likely will be a second model offered to Canadians at a later date, however.

Gone is the almost cartoon-like take on the kidney grille that the 3 and 4 Series get, replaced here by a much slimmer, more tailored example that looks especially good in black against a white background as seen here. The headlights are also new, and smaller, and brought further to the corners of the front fascia. For some, that makes for a lower, wider look – indeed, that’s likely what BMW was going for – but others I’ve spoken to found it somewhat awkward-looking when seen from the front-three-quarter angle, citing the large gap between the leading edge of the fender and corner of the headlight lens. 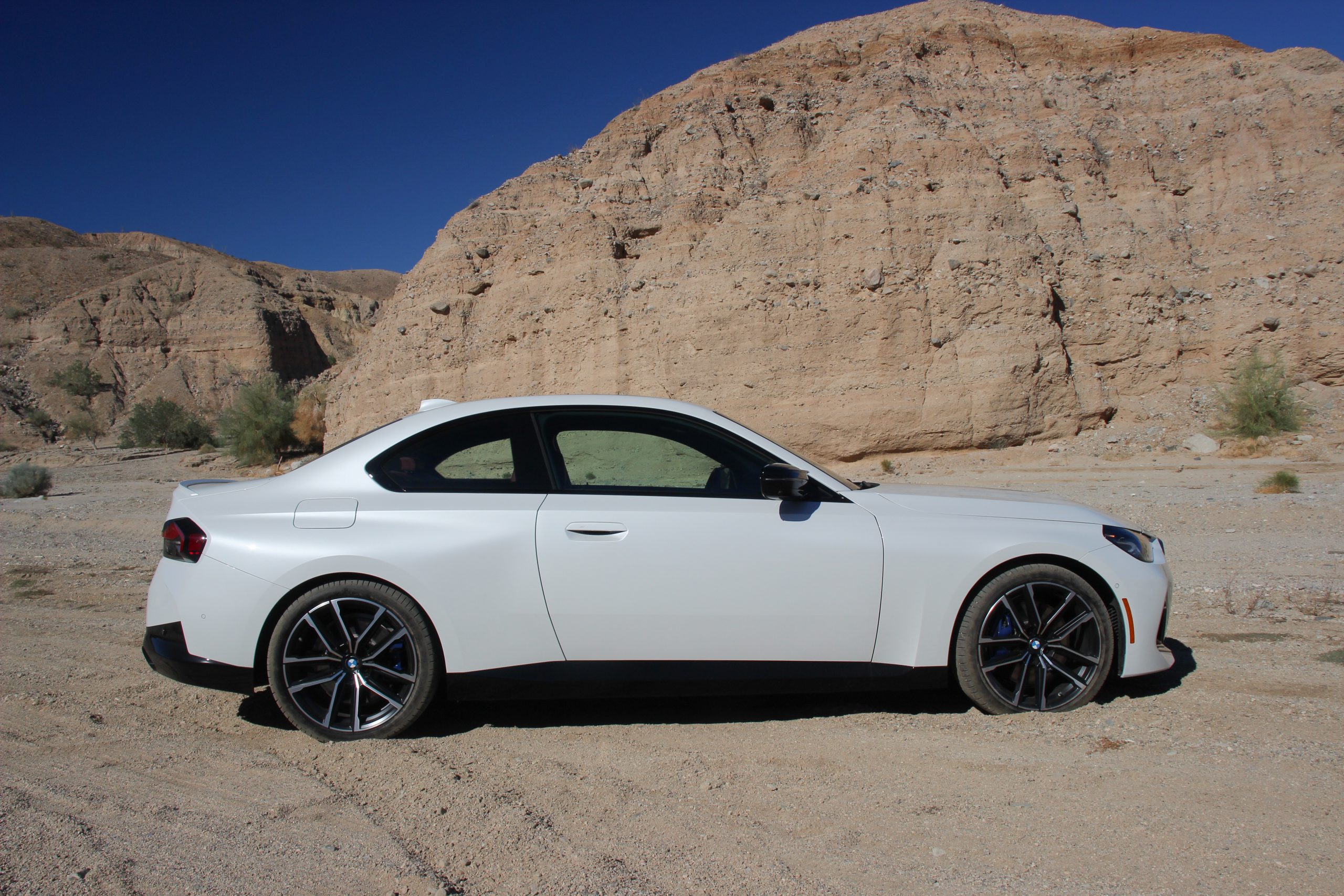 Personally, I don’t mind them, especially when seen from head-on; the way the shape of the lenses kind of mimics the shape of the “floating” wing mirrors above has the great effect of making it look mean, and like the car is really bearing down on you.

‘Round back, the taillight lenses have also shrunk and look a little like the items found on the 1 Series hatchback we never saw on our shores. The rest of the rear fascia is made up of some subtle creases and a less-than-subtle rear diffuser and looks nicely muscular as a result. Yes; the rear deck and trunklid are short, but that’s because they’ve moved the cabin back, leaving a properly long hood that looks very junior grand-tourer and ensures that the view in profile is the best way to take it all in; it’s also about as long as the 3 Series was back in the days of the E46 – which wasn’t that long ago. 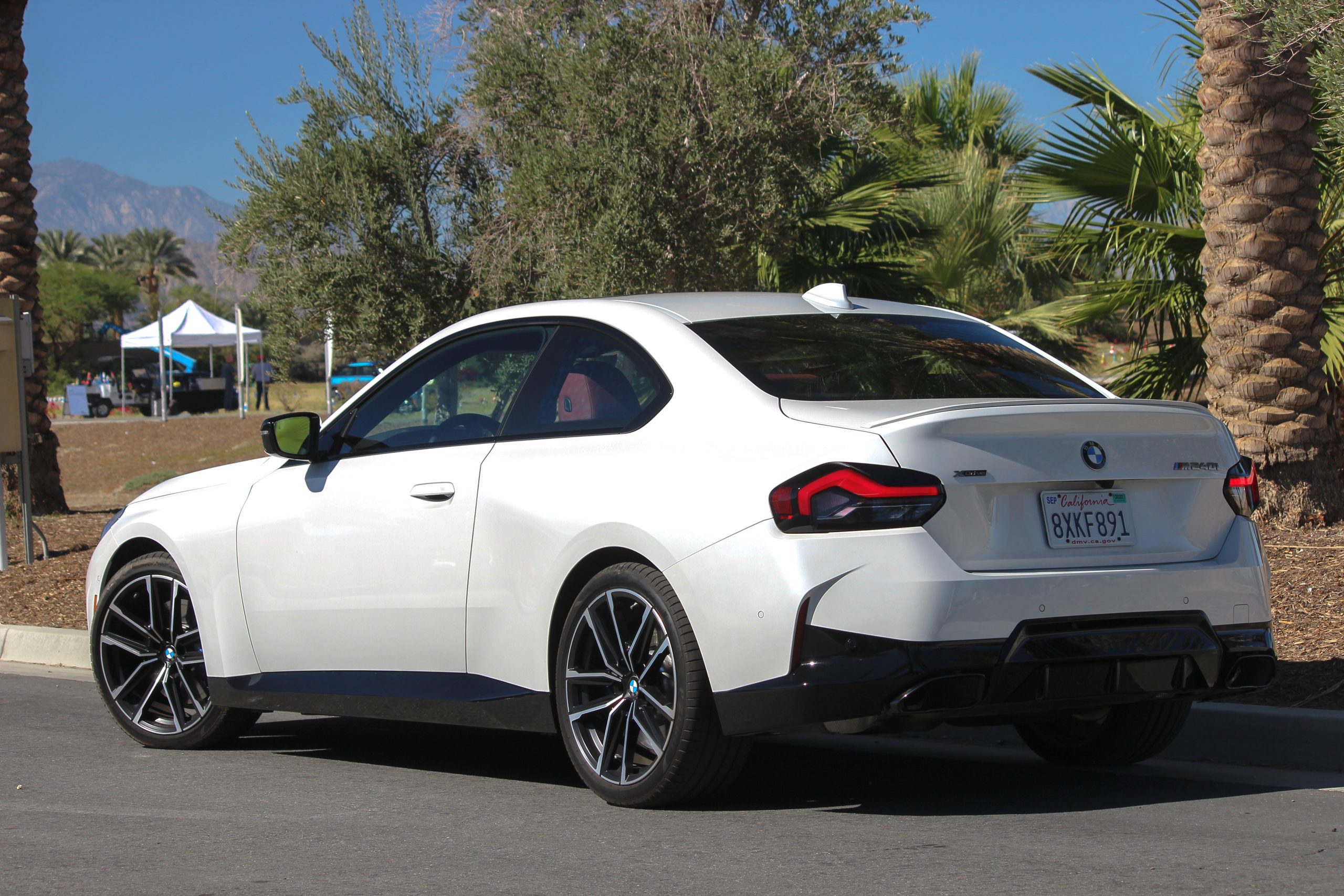 Inside, the changes aren’t quite as marked, but that’s not to say it’s a bad place to sit. The driver’s seating position is just about perfect, all the controls fall easily within reach, and the steering wheel diameter is right on. The rim may be a bit chunky for smaller hands, but the 2 Series’ cabin is not the roomiest place to be and the small wheel means a better view out and less interference with your thighs. There are also more high-quality materials found inside making this new 2 Series feel that much more luxurious than it was previously.

Adaptive cruise control, lane departure warning, and parking assistance are all present and accounted for. More BMW-specific adds include the BMW assistant that can do everything from setting your navi instructions to adjusting your climate control and – for you paranoid types – there’s an on-board recording device that functions as a dashcam. You can also get up to 14-speakers for your Harman Kardon sound system – generous for what is such a small vehicle. A 10-speaker system comes as standard. 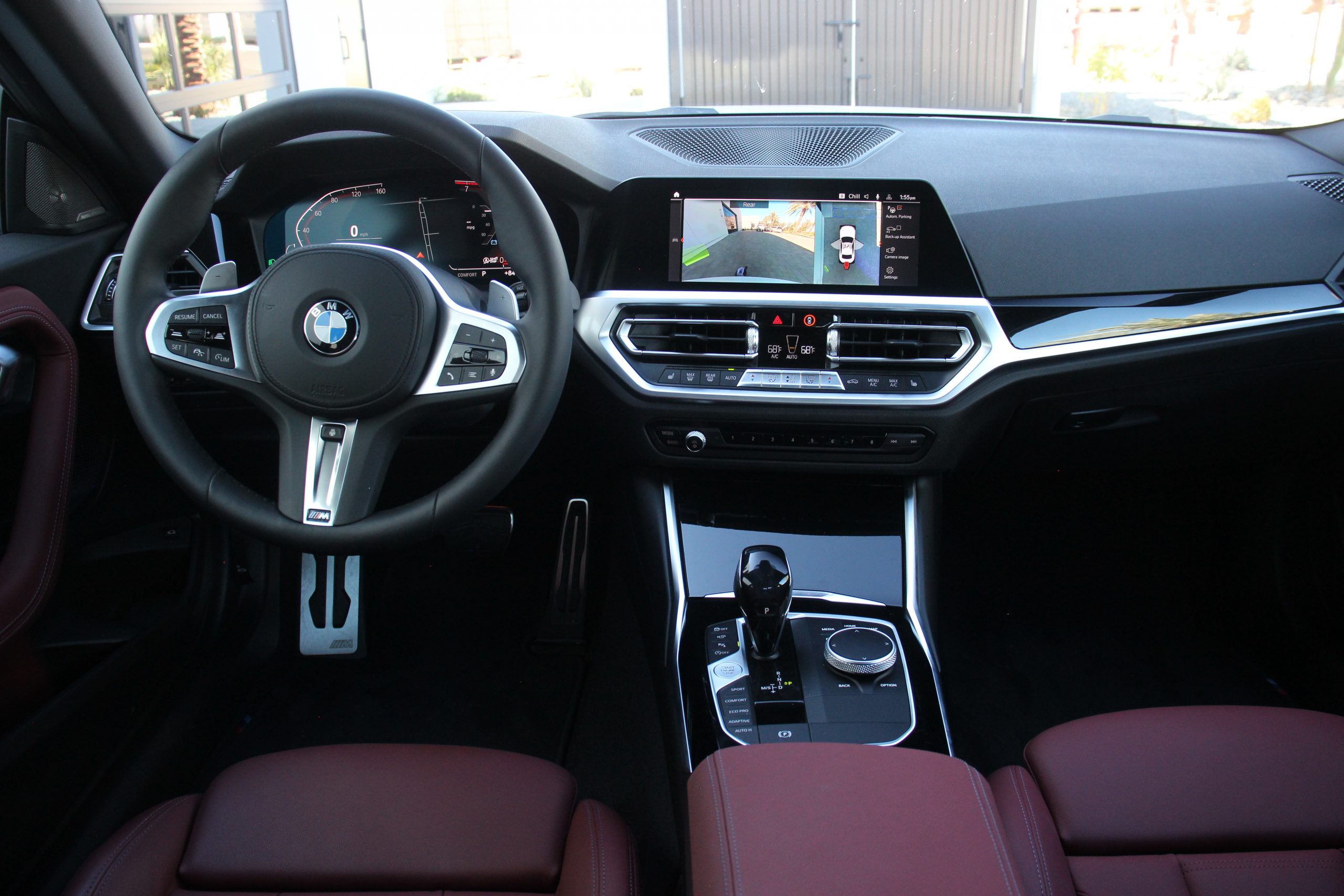 As good as that system sounds, it doesn’t hold a candle to the symphony that emanates from the twin-outlet exhaust. We had the chance to drive on a beautiful canyon road just outside of Palm Springs and hearing that straight-six exhaust note bouncing off the canyon walls never got old. It didn’t get old from behind the wheel, and it didn’t get old hearing the M240i from a distance as I stood on the shoulder to snap a few pics.

Power is rated at 382 horsepower and 369 pound-feet of torque, and with peak torque arriving at just 1,800 rpm, launch times are fast, to the tune of a 4.1-second 0-96 km/h sprint. That’s fast, but the wide stance and fat tires provide so much grip and stability that you never get the feeling that the M240i is getting away from you, even when out on the track at the Thermal Springs Club raceway. 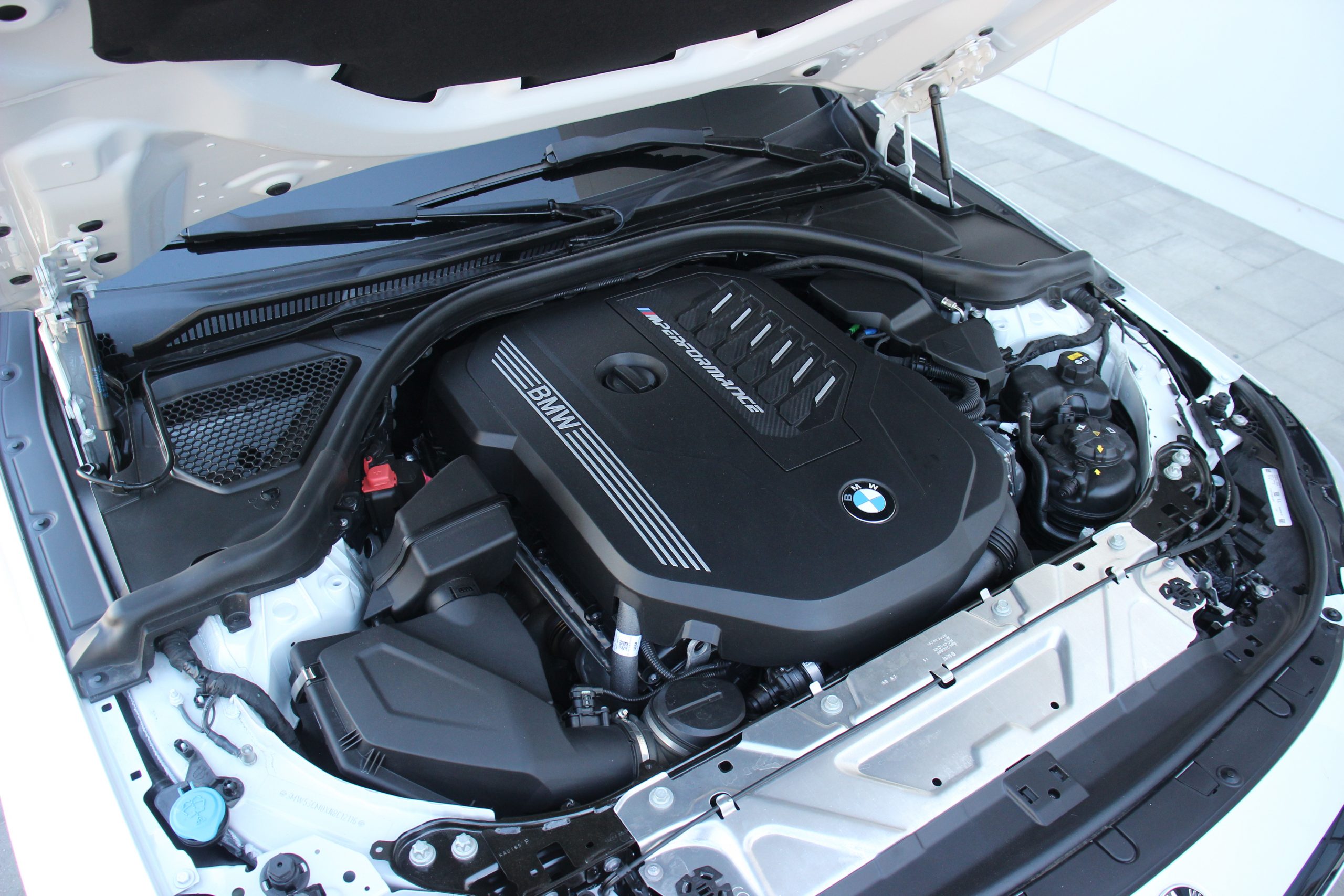 The M240i was just all throttle, slight squat, throttle and repeat out of corners. Coming into corners, dive under braking has been reduced thanks to newly-tuned shocks and optional adaptive dampers. You do have to trust it, though, as the feedback through the wheel could be a little better. That’s an issue that has plagued – and continues to plague – many modern BMWs, so you just have to learn to work with it.

While there is no RWD version for us Canadians at the moment, the M240i does feature a multi-plate clutch in its transfer case that allows for all the power to be sent to the rear wheels exclusively, until power is required to reduce slip up front. Add the standard M Sport rear differential, and you have a car that’s well-suited for the track and your favourite b-roads.

I did start to experience some brake fade on the track and that was tough to fully ignore. It was never an issue on the public roads we drove on, but those were quick jaunts; you’ll want to be wary on longer drives. Also, as things do start to slow down be prepared for a firm ride, even in the softer damper settings. There’s only so much you can do to mask the effects of those standard 19” wheels and low-profile performance rubber. 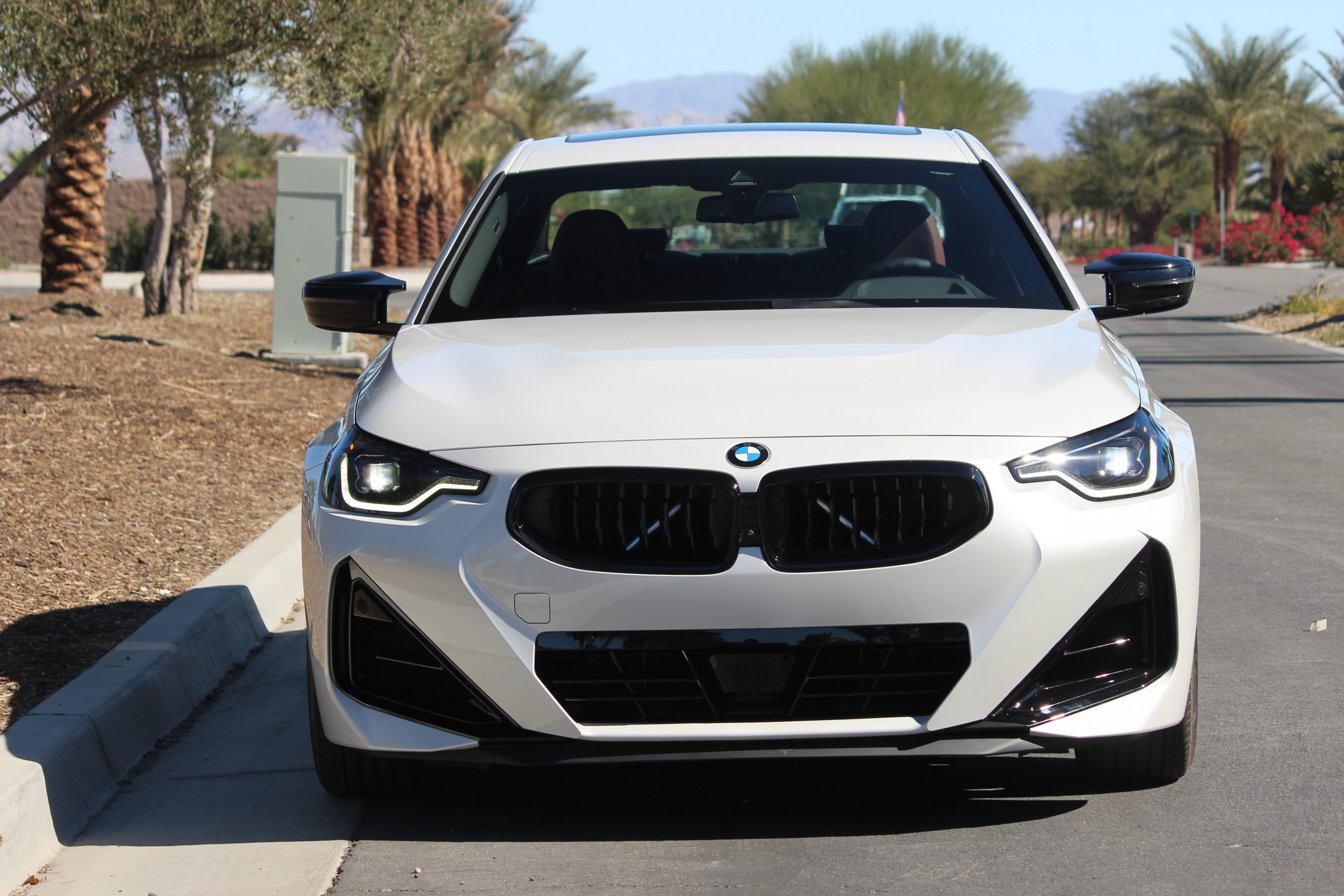 It stands to reason that while the M240i can hold its own on the track for the time, it isn’t a track car. The previous 2 Series eventually received an M2 version and if that trend continues here – and we have no reason to believe that it won’t – then that will be the car for the true trackday folks.

For its part, though, the M240i is a full-blooded sports coupe that delivers a great mix of thrills and comfort. In may be BMWs entry-level model, but it sure doesn’t feel it.