The new M3 has controversial styling but more performance than ever before.

Join the Conversation (0)
It’s difficult to discuss the new BMW M3 and M4 without bringing up its controversial styling, specifically those kidney grilles. This is a design feature so iconic and so synonymous with the brand that it makes a BMW one of the most recognizable vehicles in the world. Mess with this and you’re going to ruffle many feathers.

And that’s exactly what happened. BMW went radical with the grille, making it bigger than ever before, taking on a shape that harkens back to their pre-war cars. Apply this aesthetic to a modern BMW and the results are nothing short of dramatic.

The Internet responded angrily with plenty of “barf” emojis and endless rants of “I’m never buying another BMW again.” “Park it in the garage nose first, and you won’t have to look at it,” was another common one.

After finally seeing the new M3 in the flesh, I became a fan. The grilles flow into the muscular hood creating two separate intake nacelles of sorts. Slim headlights are canted into an angry stare and an open and aggressive bumper looks like it could ingest a sky’s worth of air in one gulp. Imagine seeing this barreling down on you in your rear-view mirror!

The look is menacing, and there’s a metric ton of road presence, confirmed by an overwhelmingly positive reaction from anyone that encountered it. 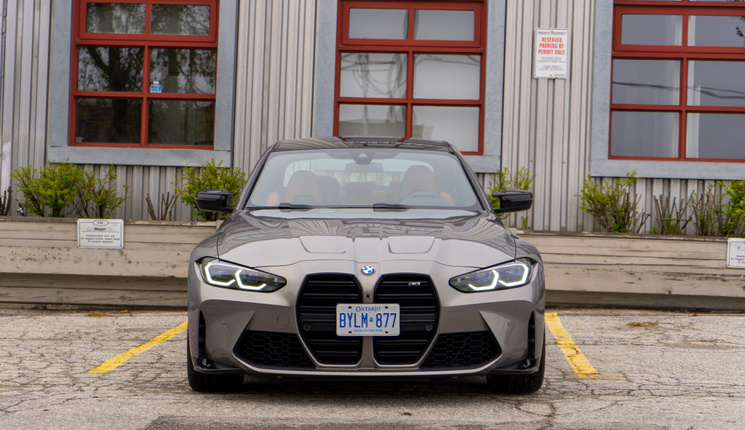 In fact, it got so much attention it might as well have been Deadmau5’s Purrari. And from my experience, it’s the auto journalist crowd and those that follow them that aren't digging it. Look, I get it, it’s not what you would call pretty, but there isn’t an M3 out there that can claim that title. They’re supposed to be fast, aggressive, German sport sedans and they certainly look it.

First, and most importantly, the manual transmission is back. You don’t get one in the regular 3 series, but it’s here, probably where it will be appreciated the most.

The base M3 gets a 6-speed stick while the Competition models are auto only. This time around the automatic is an 8-speed torque converter unit and not the 7-speed dual clutch found in prior generations. 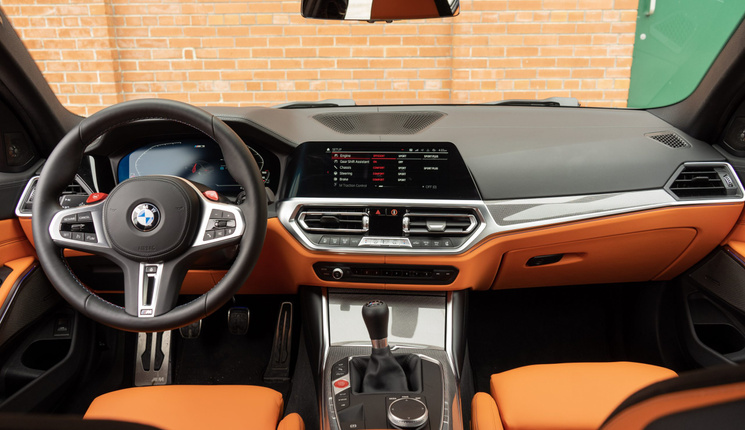 Under the hood, the heavily updated S58 3.0-litre inline-6 features twin mono-scroll turbochargers, electronic wastegates, and water-to-air intercooling. With a forged crankshaft for strength and a 3-D printed core in the cylinder head for weight savings and optimized cooling, the M3 produces 473 hp, up 48hp over last year’s model.

The M3 and M4 Competition get the same engine but boosted to 503 hp and 479 lb-ft of torque. Why the difference? One of the BMW engineers simply told me the base M3’s power was “enough”. He then mentioned that developing another manual transmission to handle the extra torque wasn’t in the cards at the time.

Makes sense, and I can certainly attest to “enough”. In fact, the factory rating of 473 hp seems pessimistic. It’s no secret that BMW underrates their cars, and there’s no better example than this M3.

To handle the grunt, the M3 gets its trademark flared fenders to accommodate the wider track and wheels.

Based on the excellent CLAR platform that makes the M340i so good to drive, the M3 takes things a step further with unique front and rear subframes and bespoke suspension pieces.

What does all this feel like behind the wheel? In one word, phenomenal! 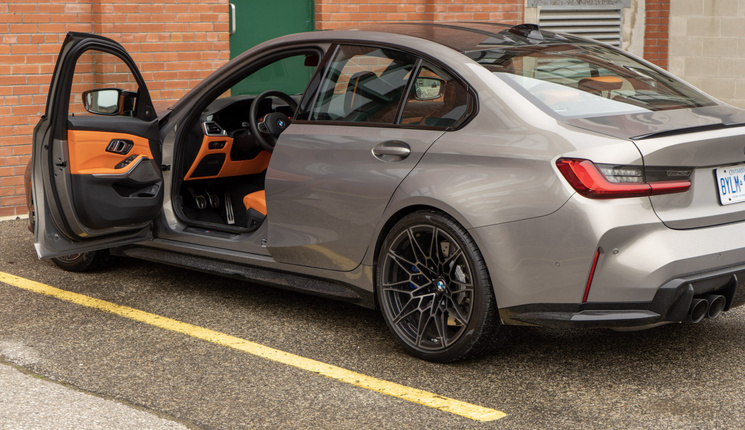 The red engine start button brings the boosted straight-six to life with a familiar snarly growl as aggressive as those front grilles, which help ingest the copious amounts of air needed to satisfy the motor.

BMW’s drive mode complexity continues here, forgoing drive modes altogether and allowing you individual control of steering feel, throttle response, dampers, brakes, and the gear shift assistant (auto rev match). Thankfully those two bright red buttons peeking out like little ears from behind the steering wheel allow you to program your two preferred setups and call them up instantly when you want to.

There’s also a ten-stage traction control setting that will allow you to fine-tune how much slip angle the computers allow you before reining it in.

If that’s not enough they’ve also included a drift analyzer, which I didn’t try, but for an excellent review on how that works watch the Straight Pipes slide a yellow M4 around trying to get the highest score. 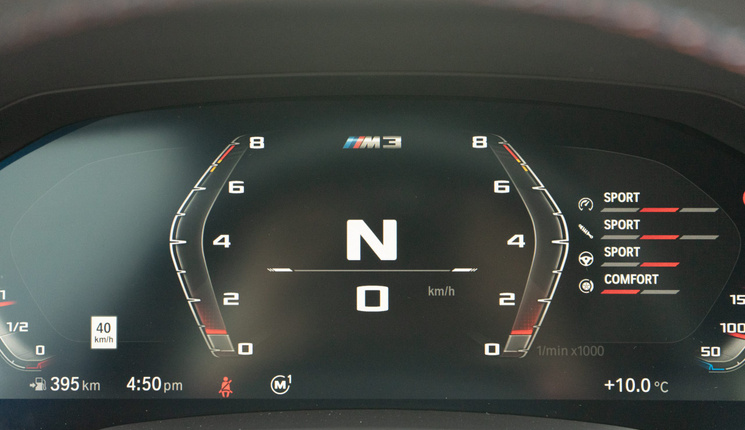 Once you’ve sorted out just how you want your M3 to behave you snick the slightly rubbery, slightly tall gear lever into first, let out the light clutch pedal, and off you go. Sport and Sport plus engine settings give the sharpest throttle response and also open up the exhaust valves for all that sweet straight-six music.

Sounding better here than it did before even with the fake engine noise being pumped in through the speakers, the sound is a mixture of throaty exhaust rasp and straight-six snarl, albeit muffled by the twin snails up front.

Past 2,000 r.p.m. the engine is a bomb, surging with alacrity to its 7,200 r.p.m. redline. Turbo lag is minimal, and power is delivered in velvety smooth wallops. Before you know it, you’re grabbing another gear, made simple by the easy-to-use manual transmission.

The steering is laser-precise and lightning-quick, getting progressively quicker the faster you turn in. There’s not too much being sent back to your palms in the way of feedback, but there’s enough chassis feel that you never really notice or care, and the ride never gets harsh or uncomfortable.

Find any corner and the M3 will make it submit, making it seem like you could enter at nearly any speed. There’s so much grip that within the constraints of being a law-abiding citizen I could not get one peep out of the meaty Pirellis no matter how much I tried. But apply a healthy amount of throttle early and the tail will happily and predictably step out. Yes, this is still an M3, and it’s still as tail-happy as it’s always been. And frankly, that’s the charm of this car. 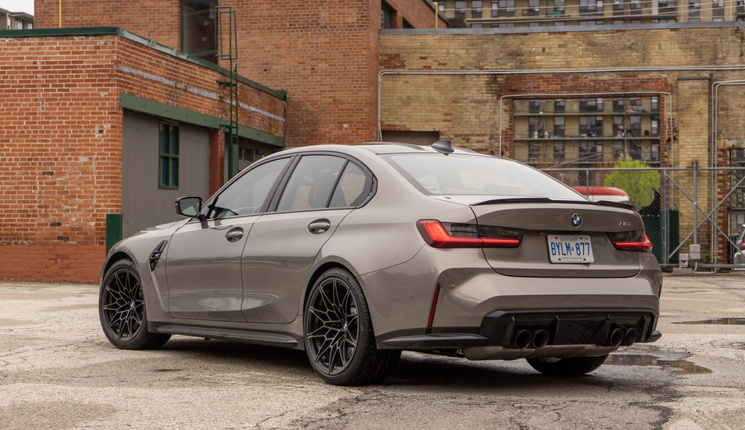 There’s more at work here too, and it’s hard to put your finger on just one thing. From the impeccably tailored cabin with its gorgeous Kyalami orange leather, and fantastic looking trim to the way all the tech and electronics work perfectly and the way the car can just put a smile on your face even when just driving at normal speeds. This new M3 might just be the most fun I’ve ever had in a sedan.

Whether or not you’re a fan of the look, the M3 screams excitement. It feels as far away from a normal 3 series as it does from a golf cart and it will probably hold just as many sets of clubs in its trunk.

I was also lucky enough to drive the M4 Competition with its extra power and two fewer doors. I’ll have a full review of that one up very soon but know that beyond the number of openings in the body they are essentially the same car and can be configured identically.

If you have enough Bitcoin in your wallet the M3 will offer you a legendary nameplate, a practical sedan body with room for up to five people, and the performance of a Corvette. It’s hard to go wrong.