Torque of the Town

Join the Conversation (0)
LAS VEGAS, NEVADA - With only four real entries in the segment, it would be easy to overlook the HD pickup segment as an easy one. A bit of a softball for hard trucks. But to overlook these trucks would be a mistake. This might be the most competitive segment in the industry. That's why in a year that three of the four brands are revealing all-new trucks the fourth still launched a new engine. Being fresh here is crucial.

Capability, performance, and durability have long been the hallmarks of the Heavy Duty pickup. In the last few years, luxury joined that list. Now, technology is thrust to the top of the pile in an effort to help drivers make use of the other four key elements.

When it comes to capability and performance, the metrics go hand in hand. Towing, payload, and torque.

It starts with the frame. Ram has given the new HD pickup an all-new frame with more high-strength steel, eight crossmembers, and a fully-boxed rear section. 2500 trucks get rear coils, with leaf springs for 3500. Added to that is an available rear air suspension that replaces the coils on 2500 and augments the leafs on 3500. It lets the driver lower the bed for easier loading and has payload and trailer tow modes. Plus little tricks like dropping your hitch ball under the trailer tongue so you don't have to spend as much time cranking on the jack. 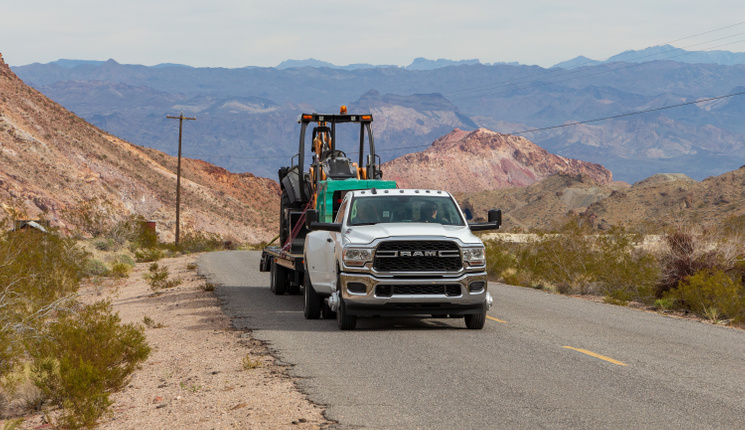 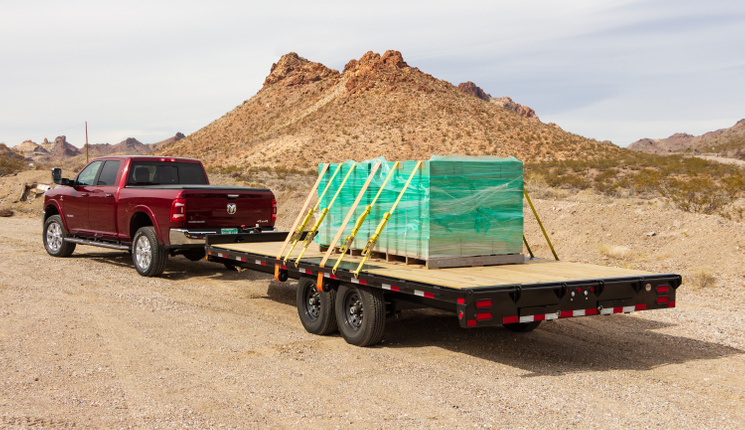 How do you drag around trailers that heavy? Big engines. Start with a 6.4L gas V8 that makes 410 hp and 429 lb-ft of torque. That engine is paired up with an eight-speed automatic, the first time Ram has used that many gears in an HD truck. The diesel options start with a 6.7L inline-six Cummins with 370 hp and 850 lb-ft of torque. That one's the only diesel for the 2500, and the standard diesel on the 3500. 3500 buyers who want HD pickup bragging rights (all of them) will want the HO Cummins that puts out 400 hp and a simply astonishing 1,000 lb-ft at 1,800 rpm. While this diesel shares its displacement with the one from last year, this is a new engine. The block is new, the cylinder head is new, and the rotating assembly is new. The compacted graphite iron block is now more both the strong and silent type. The whole package is about 30 kg lighter. Both diesels get six-speed autos, with the more powerful truck getting a higher-output capable version.

Phrases like "you don't even feel the trailer" get thrown around a lot, but they aren't exactly accurate. I was intensely aware that I was towing 15,995 kg of trailer, tractor, and concrete blocks behind me. That wasn't the truck's fault, though, because even starting from a stop on a seven-percent grade, the 1,000 lb-ft of torque pulls the trailer up to speed at an impressive rate. The integrated exhaust brake on the diesel maintains speeds very effectively and the gearbox will let the engine rev to redline to help add engine braking. It makes towing easy, even at max load. It's just that when you're hauling the equivalent of about 15 Fiat 500s, plus the weight of your own truck, it's a good idea to think carefully about what you're doing.

Ram has added available power adjustment to the convex tow mirrors to help make sure you have maximum visibility. And the quieter interior should mean less driver fatigue when you're spending your days hauling. Unloaded, the diesel doesn't provide the monster shove you might expect those power levels to afford, but, after all, this is a big truck and turning four rear wheels takes a some of the edge off the acceleration. 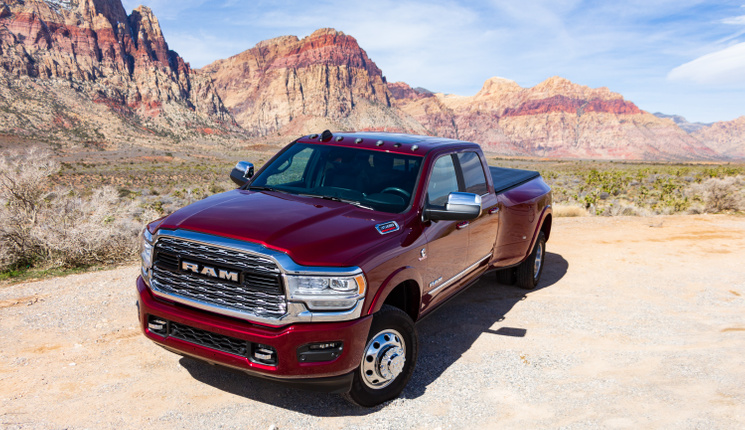 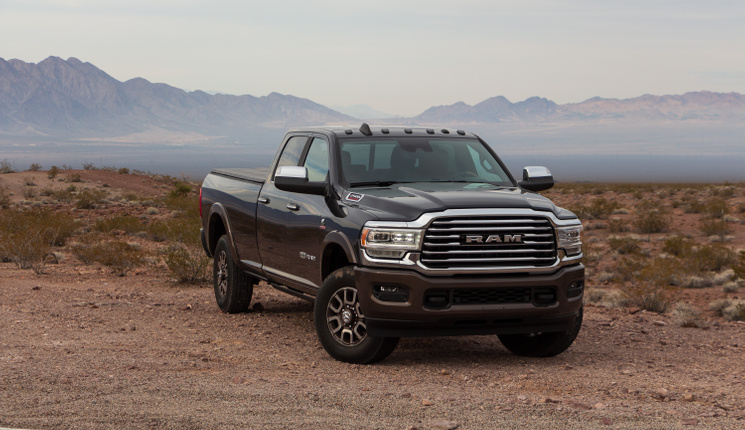 The new Ram HD comes as close to car-like handling as any HD pickup I've ever driven. It's smooth on the road, considering the payload of the empty 3500 dually I drove on the way out. The 2500HD I drove on the way back to the hotel needs no such caveat. It was just plain smooth. There's still some of the pickup feeling of a jolt moving up through the tires, then the bushings, springs, then into the cabin, but these HD pickups are better controlled than the light-duty 1500 trucks of the last generation. Thanks to the new Cummins engine, more sound deading, and active sound cancellation, these pickups are luxury car quiet. It's a case of not realizing the noise isn't there until you look at the radio volume setting or crack open a window. Yes, you'll still hear the diesel when you get on the loud pedal, the Hemi V8 too, but cruising at 120 km/h on Nevada Interstates is almost eerily silent for something that is punching this much air out of the way. Ram says the trucks are 10 dB quieter than before, which makes them half as loud.

To go with the new luxury car noise levels are some luxury grade interiors. Any of the Laramie trims really step up with leather on most of the interior surfaces you see. Even bits like the grab handles are wrapped in hide. They add different themes too, that have real differentiation, not just gimmicks. Like the Longhorn with barn wood accents and what looks like gold laurels around the instrument cluster. It even has belt buckles on the rear seatbacks. The different trims all have unique fonts and backgrounds for infotainment and dashboard gauge cluster settings that are intended to match the theme of the trim. The effect is that of a legitimate luxury vehicle, and much like the Ram 1500, it's the nicest place to be in the class. That includes the cloth seats of the base Tradesman. It's usable as well, with an absolutely cavernous space in the center console. Movable cup holders, hanging file storage, and enough volume that I managed to lose my phone in it for a good 10 minutes. The only real material miss is the turn signal. Against the high-quality materials everywhere else, the stalk felt out of place and a little flimsy.

Most drivers and all but the absolute tallest rear-seat passengers will find plenty of headroom. Same goes for the premium economy legroom of the crew cab and business class-level Mega Cab. But at 6'-3", I found headroom a touch snug in the driver's seat. The non-telescoping steering wheel put my knee firmly against the four-wheel drive selector as well. And a large bulge in the front passenger footwell had my left leg bending at an angle that got uncomfortable fast when I took my turn as navigator. 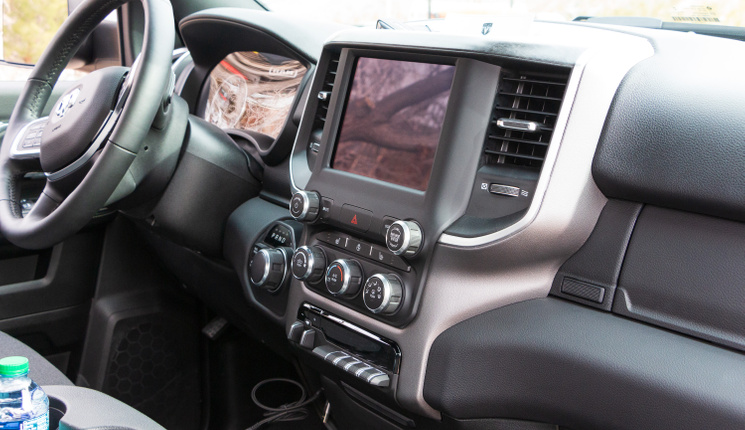 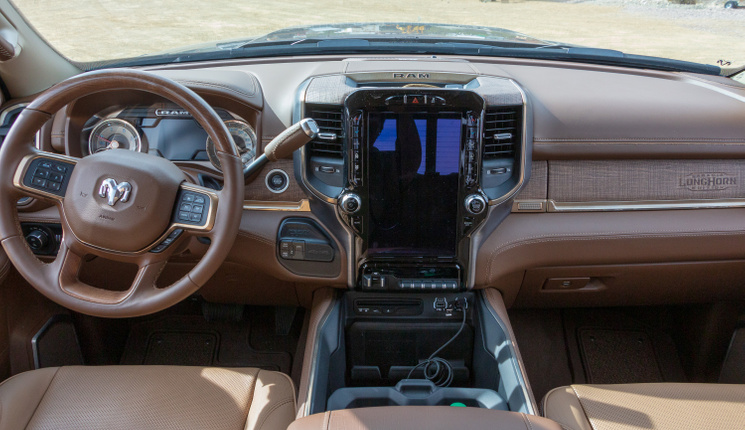 Even though they don't all get the massive 12-inch Uconnect infotainment system, the trucks that aren't the top trims aren't left out. The Tradesman trucks get vinyl or cloth seats and a 5.0-inch Uconnect display. Big Horn starts with that same system but the rest get a still-sizeable 8.4-inch Uconnect system with Apple CarPlay and Android Auto support. The system is quick and responsive. Most importantly, most of the controls still get physical buttons should you not want to use the digital ones. Unfortunately, the optional surround view camera system doesn't get a real button.

The Power Wagon returns with some upgrades to the off-road ready truck. The front sway bar can disconnect to let the front wheels move more off-road. Unhooking them makes the ride pleasantly compliant when hopping rocks and bridging boulders. Some of the credit for that goes to the Bilstein shocks tuned just for the Wagon.

Underneath are locking front and rear axles, skid plates for the gas tank and transfer case, and special 17-inch wheels with Goodyear Wrangler Duratrac tires. The tread pattern of those tires is duplicated on the truck's standard cloth seats. Look in the front bumper and there's a new 12,000 lb Warn winch with a synthetic cable to make it easier to use. 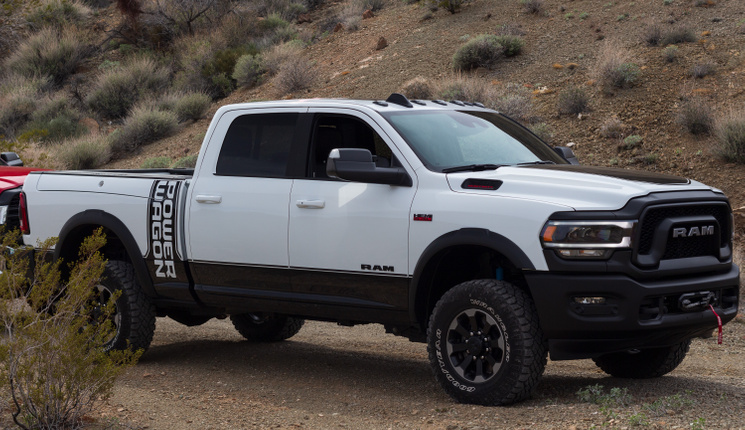 On the active safety side, the new Ram HDs come with lots of kit on the options list. Adaptive cruise, forward collision mitigation, LED lamps that put out nearly 50 percent more light than before, and auto high beams all make that list. There's blind spot monitoring too, though it doesn't cover the trailer's extra long blind spots. Dually owners will appreciate the rear parking sensors that cover the extra width, making sure they don't trim their fenders when backing up. Lane guidance would be appreciated on the long stretches of highway that long-range towers are likely to endure on a regular basis.

The pickup truck has already become the new family vehicle, something that happened close to a decade ago. Now, the Ram HD is taking command of that role. It offers buyers the experience of a luxury sedan or lets them pick a vehicle that's ready to get dirty, used, and abused every day. But even in the work-truck versions that will probably spend their lives moving from construction site to construction site, drivers still get a quiet and comfortable ride. With the option to tow a medium-sized house and put the weight equivalent of another HD pickup in the bed. The new Ram HD trucks are a force to be reckoned with. One that pulls eyes with more force than that 1,000 lb-ft of torque.