“You turn it on and just feel happy.”

Join the Conversation (0)
Does your gas station miss you?

If you’ve gotten an especially warm greeting from your gas retailer, there’s a reason for the goodwill: Gasoline sales are falling, a descent that began long before COVID-19 burst onto the scene.

While there are some significant demographic and cultural dynamics at play – hello Millennials and Gen Z kids – the steady parade of more efficient combustion engines, gas-electric hybrid drivetrains and all-electric vehicles has ushered in the last vestiges of peak oil.

Electric vehicles have captured a lot of headlines these days, but let’s not forget the ground-breaking introduction of Toyota’s hybrid cars that cornered the market for the longest time – its Prius was unveiled back in 1997 – and inspired competing models from Honda, Ford and others. Hyundai released the most serious contender with its Ioniq Hybrid for 2017.

Hyundai had dabbled in gas-electric drivetrains in earlier versions of its Elantra (sold elsewhere) and Sonata sedans, but the Ioniq is its first car designed from the ground up to work as a hybrid, and as a plug-in hybrid and all-electric vehicle, too. The compact five-door hatchback followed the Prius recipe fairly closely, but dispensed with the Jetsons’ space-oddity styling – which was met with some relief by shoppers.

“Nice to see a dedicated hybrid not screaming ‘Look at me saving the planet!’” wrote one wag online. Despite the Ioniq’s unadventurous styling, designers were able to tweak the sheetmetal to achieve a very low 0.24 coefficient of drag.

The Ioniq is built on a dedicated front-drive chassis it shares with the Kia Niro, a platform that is ready for autonomous technology. An aluminum hood, liftgate and some suspension components help to mitigate the extra mass all hybrids are destined to carry. 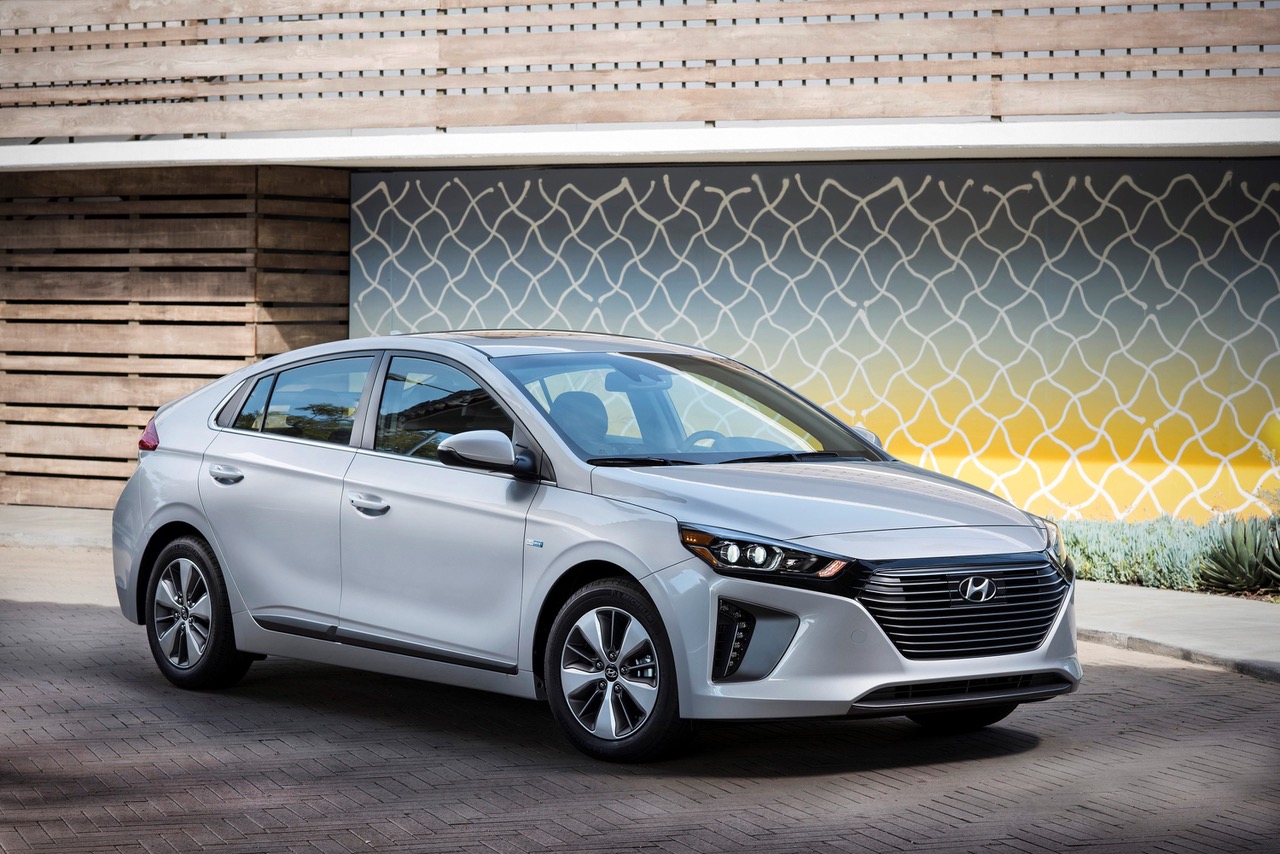 Belying the car’s advanced technology under the hood, the Ioniq’s interior is straightforward enough with a conventional dashboard and plenty of soft-touch materials of decent quality. The gear selector is a traditional PRND design and the instrument panel has a simple analog look, with a circular speedometer flanked by an eco-driving gauge and a battery minder.

There’s more interior volume than the Prius can offer, although the slope of the roof rearwards makes anyone taller than six feet feel cramped sitting in the back seat. The hatchback offers a lot of flexibility in terms of accommodating cargo, but there’s the matter of the obtrusive lift-over height to contend with.

“It’s much more difficult having to lift stuff out of the back instead of being able to pull it straight out,” an owner grumbled online. “And there is no rear wiper. What’s up with that, Hyundai?”

Outward visibility is less than ideal. The chunky rear pillars make parking maneuvers a challenge, and plenty of drivers dislike the split rear glass. Some found the horizontal line of the spoiler distracting, but at least there’s a standard backup camera.

The Ioniq Hybrid was quickly joined by the Ioniq Electric (EV) model, which jettisoned the gasoline engine in favour of an 88-kW electric motor producing 118 hp and 215 lb-ft of torque, fed by a larger 28-kWh lithium-ion battery pack providing 200 kilometres of range.

A third Ioniq was released for 2018, the Plug-in Hybrid with its bigger 8.9-kWh battery to allow for greater electric-only operation – up to 46 km of driving – and the ability to plug it into a receptacle to recharge the battery. It retains its gas tank, which means range anxiety is never an issue.

The Ioniq earned a subtle refresh for 2020; the styling inside and out was massaged ever so slightly, and all models got more standard features, including additional safety technology and optional driver’s aids. The larger, 38.3-kWh battery pack in the 2020 Ioniq EV increased its range to a more practical 273 km between charges. 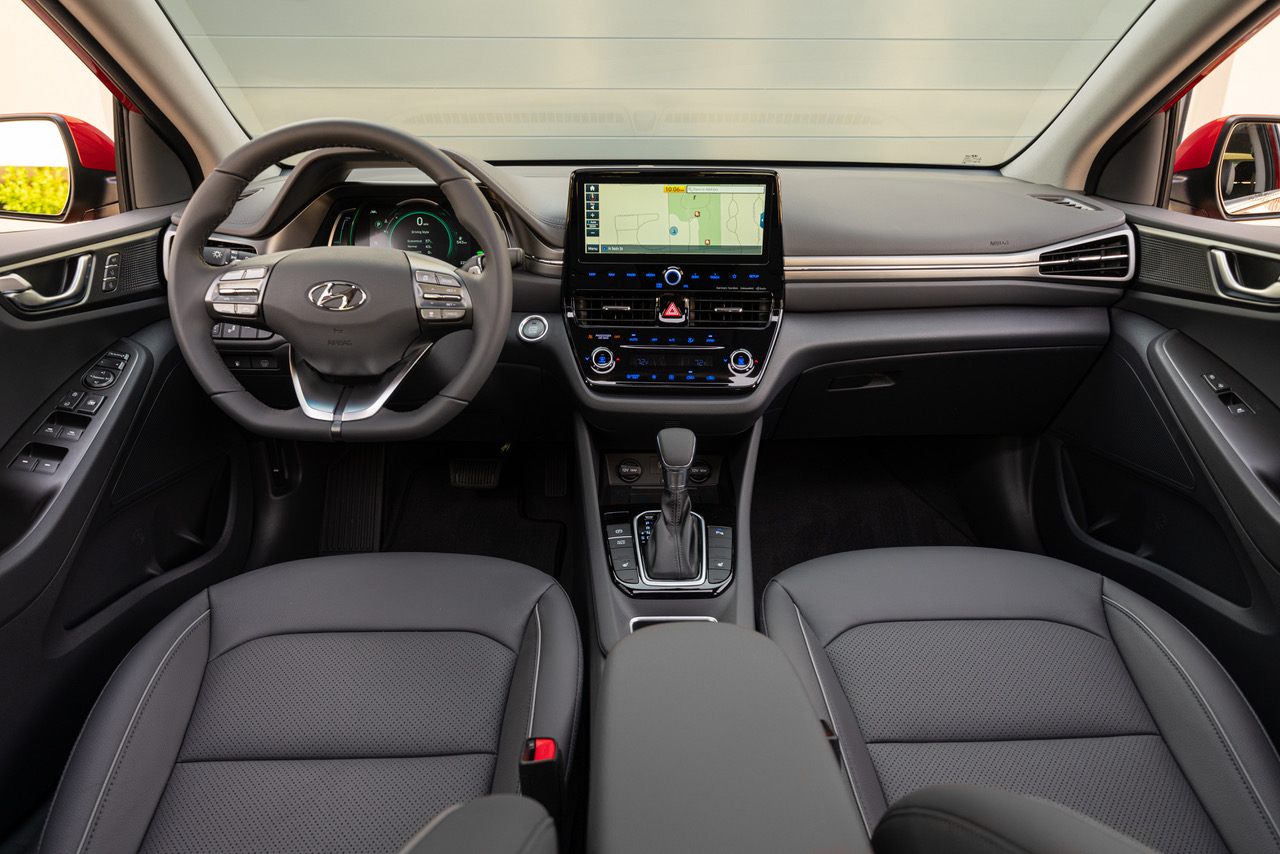 
True to form, the Ioniq launches from a standing start using electric power alone, and the gas engine chimes in at about 30 km/h. The six-speed automatic upshifts early to save fuel and a quick jab on the accelerator is met with a slight delay before the thrust arrives. Impatient types can shift the selector to Sport mode, which changes the shift points and lets the engine rev a lot higher. Acceleration improves markedly, but the mode keeps the gas engine running constantly.

Just how quick is the Ioniq Hybrid with its combined gas-electric 139 horsepower? It takes 8.9 seconds to accelerate from zero to 97 km/h, placing it firmly in the econobox class, but not embarrassingly so. By comparison, a 2017 Toyota Prius does the deed in a somnolent 10.5 seconds. The Ioniq Electric is slightly quicker than its gasoline-sipping version at 8.4 seconds.

Where the Prius has the Ioniq beat is on the de-acceleration side. The Hyundai displays a lack of regenerative braking when coasting – a missed opportunity to recharge the batteries. There is little engine braking, and the car doesn’t offer a feature akin to the Prius’s selectable braking mode. It suggests that the Ioniq will wear its disc brakes more, requiring more frequent brake service, although owners haven’t flagged the issue.

Hyundai’s hybrid drivetrain is reasonably refined, hushed and vibration-free, thanks in part to the small-displacement engine. The dual-clutch automatic transmission works well in this application and most drivers will appreciate its mechanical feel compared to the CVTs used by most other hybrids. Fuel economy is above reproach; owners delight in boasting 65+ mpg (4.3 litres/100 km) with a light foot. Drivers note that mileage plummets in frigid winter weather, however. 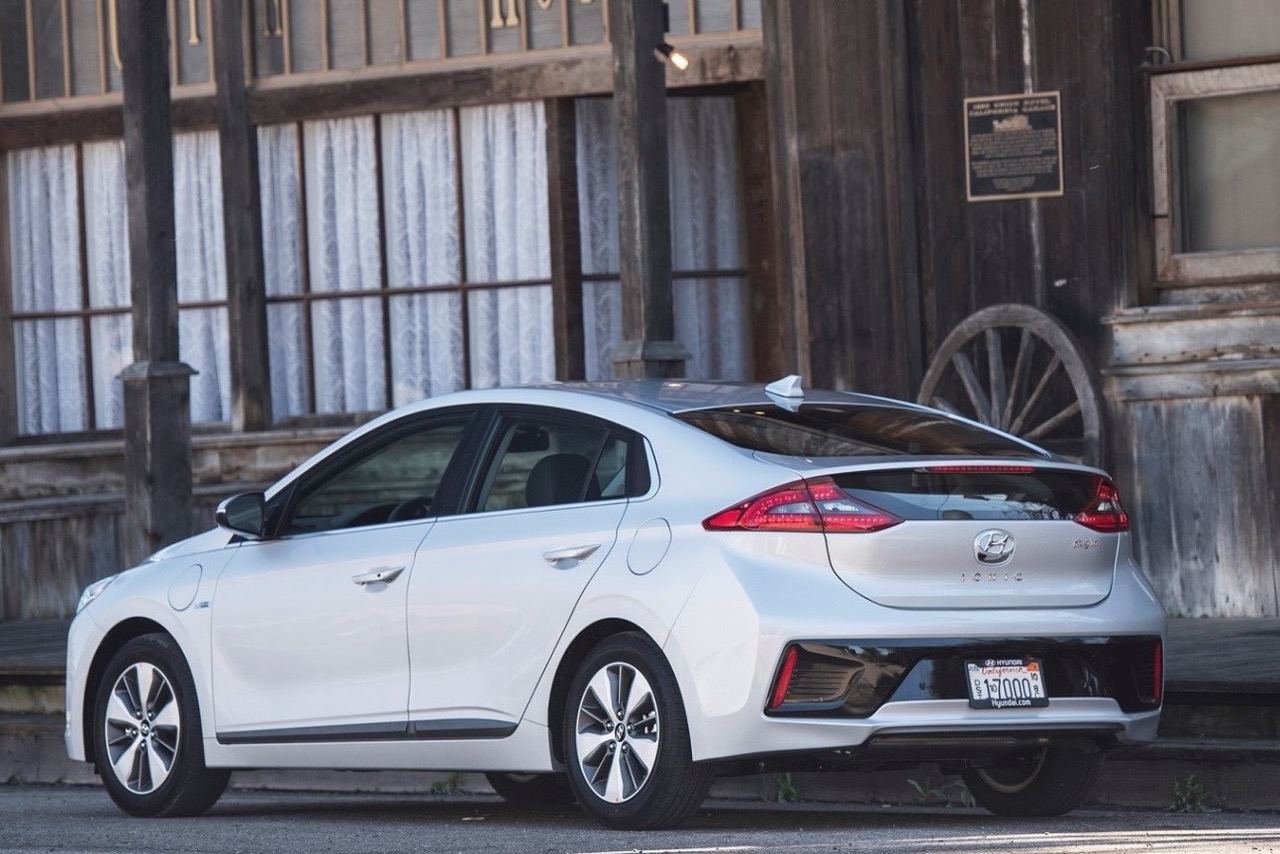 
Ioniq owners are thrilled with the hatchback’s utility, real-world fuel efficiency, comfortable ride and perfectly ordinary driving feel, as well as its affordable pricing. On the negative side, the Ioniq doesn’t have the best brakes or handling in the segment, and owners found the cargo lift-over height inconvenient and the rearward view constricted.

The Korean-built Ioniq hasn’t generated a lot of complaints about mechanical issues. Early builds did exhibit a few issues with the gasoline engine stalling or reverting to low output with a warning lamp illuminated on the instrument panel. According to owners, dealers have replaced fuel injectors and oxygen sensors to rectify the situation with varying degrees of success. Others have had their engine’s cylinder head replaced under warranty.

Hyundai is recalling certain 2017-2018 Ioniq Hybrid and 2018 Ioniq Plug-In Hybrid vehicles to inspect and replace the main relay within the Power Relay Assembly (PRA), which may have inadequate connections between its contacts, causing increased electrical resistance and the potential for fire risk. Dealers will inspect the PRA for damage and will replace it if damage is determined. If none is found, the main relay will be replaced.

It’s important to note that while Hyundai provides a “lifetime” warranty on its hybrid battery in the U.S., Canadian buyers make do with an eight-year/160,000-km warranty on the components, including the battery pack, hybrid starter and generator, Power Control Unit and transmission, including the traction motor.

Other owner gripes focus on the lack of a spare tire in the trunk (it can be purchased from dealers), and the slow-warming defroster and cabin heater in winter weather, attributed to the gas engine’s high efficiency rating.

Overall, the Ioniq delivers real fuel savings and it does so without exacting a big premium from budget-conscious buyers. One sentiment describes the Ioniq experience best, posted by a delighted driver: “You turn it on and just feel happy.”