Join the Conversation (0)
Owners of the old Defender will routinely tell you that it’s a horrible car to drive and even harder to live with on the day-to-day unless you're off-roading or towing. Yet, many have a special place in their hearts for them. Gearheads can be a weird and irrational bunch.

Launched shortly after the Second World war ended, Land Rover’s Willys Jeep-inspired truck was an agricultural “all-purpose vehicle” that didn’t have to stop when the road ended. It quickly became an off-roading legend. The Land Rover would be pressed into service for the British Army and was a favourite of the Royal family. Prince Phillip was even carried to St. George’s chapel in a custom Defender hearse he had helped create.

The Defender name itself didn’t arrive until 1990, and it was in constant production until the last one rolled off the assembly line in 2016. During its seven-decade run the Defender’s original formula barely changed, and you’d probably benefit from owning one if you live in the middle of the Serengeti but for most it’s overkill. For something more versatile, the redesigned and thoroughly modern next-generation Defender is the one you’re going to want. 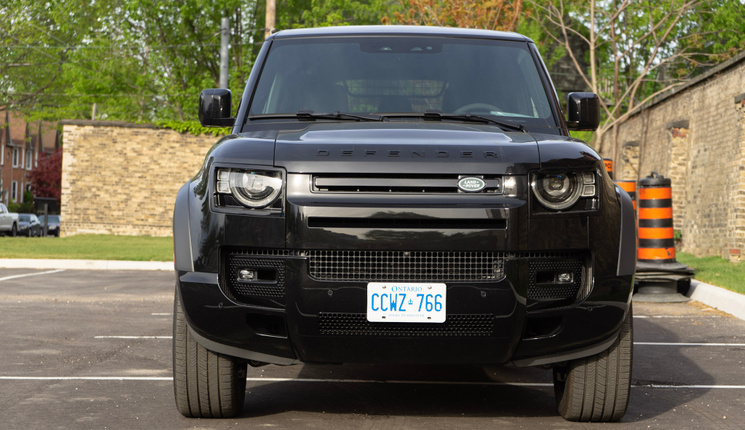 It’s already won numerous awards and accolades and received glowing reviews from every corner of automotive media. Redesigning an iconic model is never easy but Land Rover has hit this one out of the park.

With power coming from either a 296 hp turbocharged 4-cylinder or a 395 hp mild-hybrid inline-6, there’s more than enough get-up and go. But if that doesn’t sound like quite enough, a new Defender V8 will bring even more.

It’s not inexpensive starting at $128,100, but there’s quite a bit more engine: a 5-litre V8 topped with a supercharger good for 518 hp and 461 lb-ft of torque. Like all Defenders, there’s permanent 4WD and electronically controlled centre and rear differentials governed by Land Rover’s Terrain Response 2 system. V8 Defenders also get a new Dynamic mode meant to showcase its newfound handling balance, though I’m not quite sure the word handling and Defender belong in the same sentence.

A Defender V8 gets its own set of 22-inch wheels, V8 badging on the front doors and door sills, and a quad-tipped exhaust. It’s subtle and you’ll probably just think it’s a regular Defender. 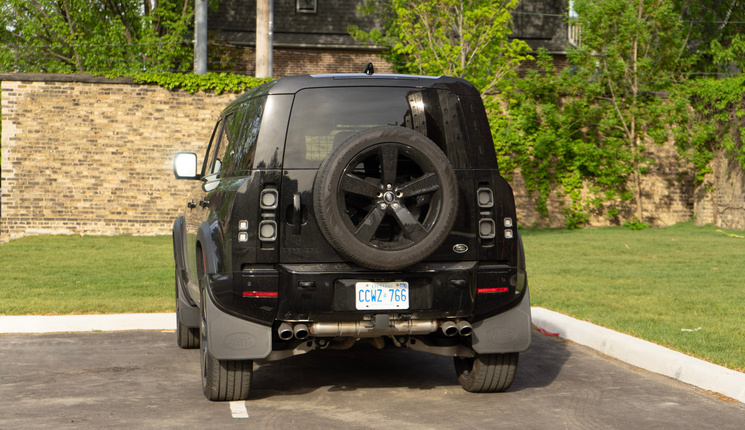 My tester had the Extended Black Pack which blacks out the badging, grille, and underbody cladding. Special mention here goes to the mud flaps and a caged cargo separator, both very cool factory accessories like the gear carriers (not outfitted on this Defender). They’re functional but mainly they look so damn cool like you’re part of some Arctic expeditionary force, and I think that’s what many of the buyers stepping into Land Rover showrooms are thinking when they first set eyes on this thing. It’s got the look of the original, and it’s just as capable as the original and then you drive it and realize that it’s also a thoroughly modern SUV and it couldn’t be more different.

The new V8 just enhances everything. Like much of the Defender’s off-road prowess the power is largely unnecessary but it adds a big brawny engine note to a big brawny vehicle and it just feels like this is how the designers always intended it to be.

The supercharger effect is invisible and barely audible when pressing on. The dynamic drive program stiffens up the steering and dampers and lets out a bit more volume from the pipes and probably the speakers too. Power delivery is immediate and the big beast squats on its haunches under heavy acceleration. An Alcantara-wrapped steering wheel, like what you’d find in an expensive sports car seems out of place but also serves as a reminder that you’re not in just any Defender. For such a big, tall thing, it’s also remarkably maneuverable; no doubt a factor of its uprated suspension including thicker anti-roll bars. 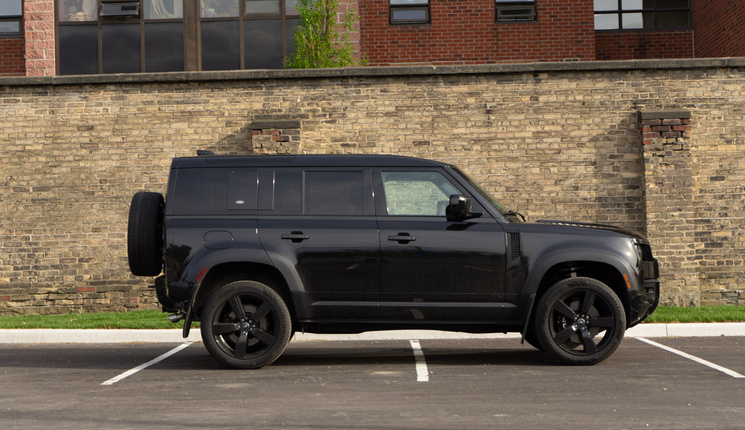 If you do venture into the wilderness with your shiny new V8 Landie, then you’ll be reassured to know that it has more ground clearance than a Jeep Wrangler Rubicon and can venture into water as deep as 35 inches. Built-in wade sensors will show you how deep is too deep right on the main screen, making off-roading, which can be quite scary at times, a cakewalk.

One of the best things about the Defender, for me, is the cabin. It is at once, durable, elegant, and thoughtful. You don’t give a second thought to getting in with muddy boots, and winters would be so easy with the rubberized floors. I’d probably ditch the floor mats altogether and just wipe everything down every other week. The seats, too, are trimmed with a hardwearing fabric that somehow feels coarse and supple at the same time, like it’s the future of fabrics, but today. 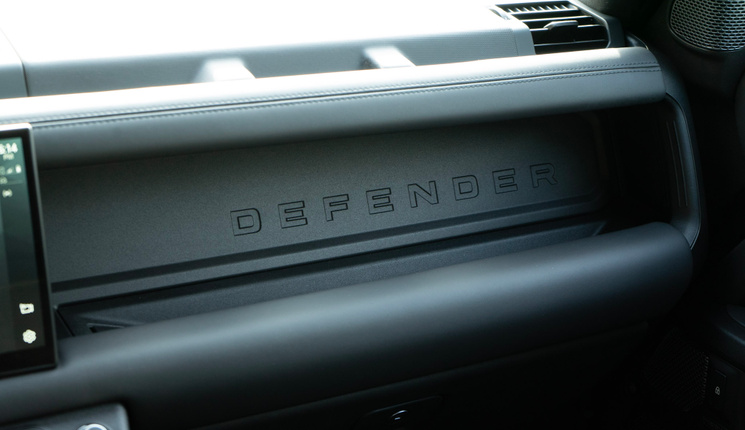 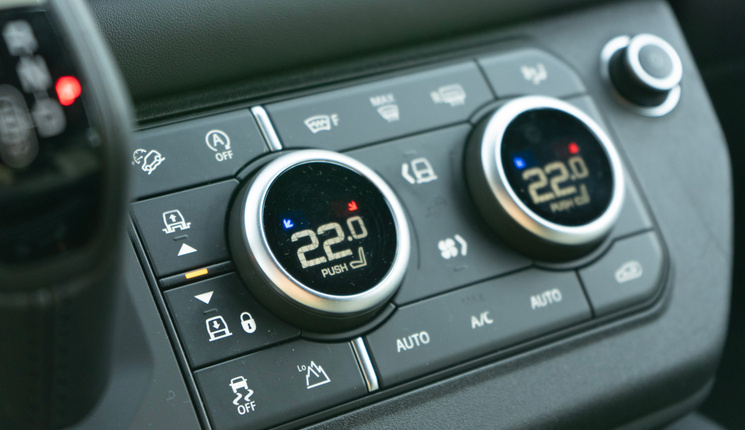 The entire dashboard is basically a storage bin, also lined with a rubberized material and there are sturdy grab handles exactly where you need them. There are big buttons for all the important things and nifty multi-purpose dials control the cabin temperature, seat climate and, even drive modes. You sit high up with a commanding view of the road thanks to lots of glass, including the famous roof-mounted alpine windows just like on the last Defender.

There’s a new screen too, an 11.4-inch curved number with upgraded software, over-the-air update capability, and faster response times. It looks great and is easily Land Rover’s best effort yet.

Gripes? Not many. It’s thirsty, which should surprise no one, but that only hurts me as the poor auto journalist that has to hand the keys back to Land Rover after filling it back up, of course. But if you’re someone who’s just forked over the cash for a Land Rover fitted with a supercharged V8, I don’t see it being much of an issue. I’m also not sure the Alcantara wheel makes sense here, but that’s just me reaching.

The new Ford Bronco and familiar Wrangler both start at a lower price but don’t offer the same combination of refinement, luxury, or presence that the Defender does. The Mercedes G-Class is even more capable but it’s thirstier and much more expensive.

The Defender is a very accomplished SUV and one of the most enticing buys in this quickly growing space of off-road-ready rigs. The V8 elevates the Defender to another level. It’s expensive and completely unnecessary, just the type of thing that appeals to gearheads.