Honda’s got the Right Fit

Fit is an economical car that’s also a Honda, meaning it’s going to be more fun to drive than most in its class

Join the Conversation (0)
Honda got its start building tiny little cars for war-ravaged Japan. In that sense, Fit hearkens back to Honda’s roots.

The subcompact, four-door hatchback (microvan?) starts at $15,190; check every box on the order form and you’ll be over 25 large right smartly.

Sure, there are equipment-level differences amongst these combatants, but this is a very price-sensitive market segment.

Fit is assembled in a variety of plants around the world, and sold under a variety of names. Canadian Fits now come from Mexico.

Perhaps my judgment was coloured just a shade by the fact that I drove pricier Hondas immediately before and after my Fit road tests. But even compared to some of that other-branded competition, Fit doesn’t give the immediate impression of being a more expensive car than it is. 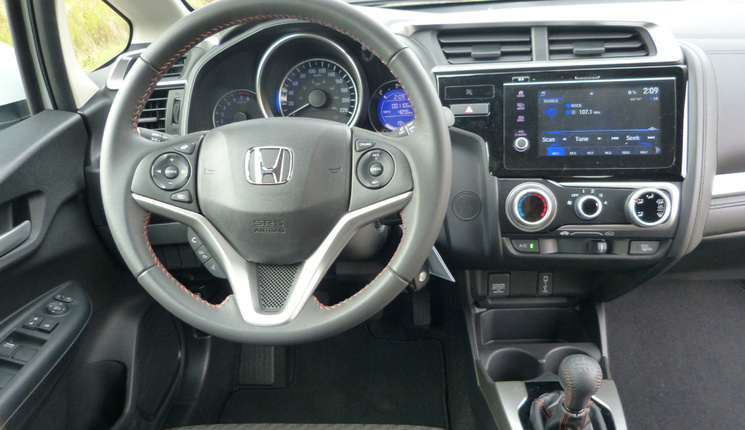 The 2018 model is significantly face-lifted from last year, giving it a fresh and handsome look.

You sit quite high in the car, and the small front quarter windows might remind some drivers of their Mom’s minivan. But they do assist in sideways visibility, as does the low belt line.

Because Fit is a fairly tall car, it accommodates people of greater-than-you-might-expect height. That said, Lady Leadfoot who was never pegged as a basketball player also found that the car, well, ‘fit’ her very well.

Even the rear seat has a decent amount of room for two adults. OK, so no defensive tackles need apply. And yes, there are three seatbelts back there, but three adults will find things very snug. Still, it beats walking home in the rain.

It’s when you start peeking into the Owners Manual to discover all the things you can do with that back seat that it gets interesting. The so-called Magic Seat is so darned clever, I wonder why nobody has tried to copy it. Hmm; maybe Honda has good patent lawyers.

Sure, you can fold the seat back forward one-third/two-thirds to augment storage space, leaving a fairly flat load floor. Everybody has that. Much rarer, Fit’s front passenger seat back can be folded rearwards almost flat, to provide room for longer articles.

But you can also fold the rear seat cushion backwards up against the seat back, fold away the tubular steel supports down against the bottom of the seat, and you are left with a tall, remarkably handy and useful storage space for large items that you would swear would never, um, ‘fit’ into such a tiny car. Major kudos to Honda for this design.

I found the seats decently comfortable, and there is sufficient adjustment in a variety of directions to give you a good chance of finding a proper driving position. The tilt and telescope steering wheel helps as well.

Some of the trim bits give lie to the car’s price, others not so much, but overall, Fit gives a decent account of itself.

The instrumentation features a large, centrally located speedometer with a tachometer on the left and a multi-meter gauge cluster on the right which offers a variety of driving information. The steering wheel looks and feels like a high-quality item and is adjustable for reach and rake.

Honda is slowly coming back to its senses with round knobs for at least some minor controls, such as heating, ventilation, and air conditioning (HVAC). These are the only way to operate something like HVAC safely, because you can use them without taking your eyes off the road.

This breakthrough, however, did not go as far as the radio, apart from a proper volume knob. Things like band selection (AM/FM), station selection, etc., are still push buttons. But I’ll take my small gains where I can. Many of the radio functions can be operated from steering wheel controls, and with more practice with this car, these might become second nature.

My test car did not have SatNav — that is available if you order the EX-L NAVI model. But there is a centre screen which controls many minor functions. Operating this screen is made difficult because there’s nowhere to rest your hand when you are trying to touch the correct part of the screen. Hit a bump and you might delete your favourite song, hang up on your spouse — who knows what?

Fit does offer Android Auto and Apple Car Play on all but the base trim level, if you are so inclined.

Honda’s “LaneWatch” blind spot display system is standard on the top trim levels. Of course, if you could only adjust the side-view mirrors correctly (which I could not, because for someone my height and seating position, they don’t go ‘out’ far enough), this expensive system would be irrelevant.

There are two cup holders side-by-each ahead of the shift lever, making them just a wee bit of a stretch to reach. But there’s another one in the dashboard at the far left end which the driver can use for his/her cuppa on the morning commute. It is located right in front of the dash heater vent, so if you’ve got a hot cuppa, the car will help keep it warm for you, and vice versa if it’s a cold drink on a hot day and you’ve got the A/C cranked. 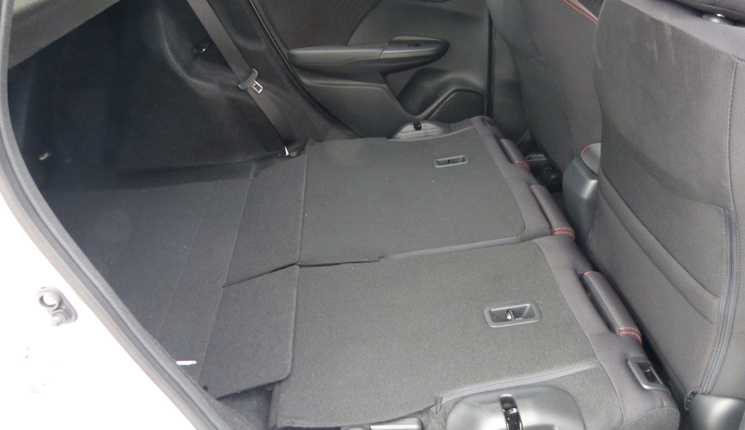 I say “puzzling” because that’s when fitted with the base six-speed manual transmission, like my initial test car. When you specify the optional Continuously Variable Transmission (CVT) automatic, that torque number is ‘only’ 113 lb-ft at 4,600 r.p.m. You wonder how they ever even noticed.

I did try both powertrains. With the six-speed manual transmission, the engine is spinning about 3,600 r.p.m. at ‘normal’ highway cruising speeds (OK, so 120 km/h), hence it’s a wee bit buzzy.

As noted above, shift quality isn’t up to Honda’s usual standards, but it’s still not bad. The CVT-equipped car did its job unobtrusively. Then again, I’ve never had a major problem with the so-called ‘motorboating’ of most CVTs. Also interesting to note that the CVT scores fairly significantly better on the Transport Canada fuel-economy scale, achieving city/highway numbers of 7.0/5.9 L/100 km versus 8.1/6.6 for the stick shift.

Performance? ‘Perky’ comes to mind. Honda engines generally love to rev, as does this one. Peak torque isn’t all that high, and it doesn’t come in until the mid-four grand r.p.m. level. Fit probably feels quicker than it actually is, but who drives to work with a stop watch in their hand?

There was a bit of wind noise in highway cruising, but generally, Fit is entertaining to drive, as you would expect from any Honda.

Actual grip levels are fairly modest, due to the smallish tires, but the car responds well to the helm as sailors are wont to say.

There’s even a proper pull-up hand brake which is getting ever rarer in today’s cars.

In sum, Fit is an economical car that’s also a Honda, meaning it’s going to be more fun to drive than most in its class. Providing the Mexicans can keep up qualitywise, it should be reliable too. 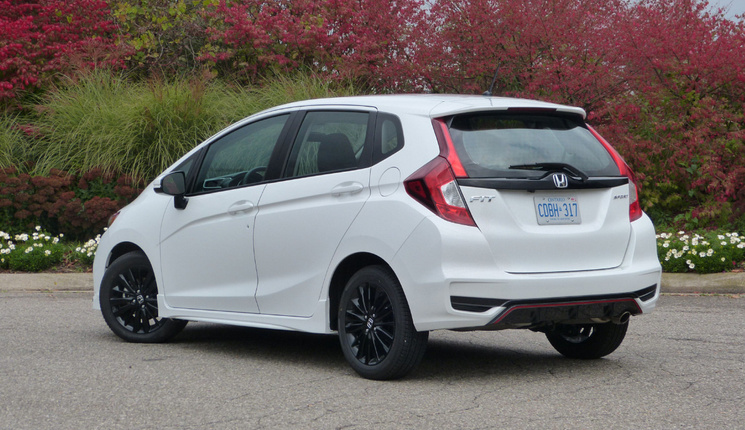