Join the Conversation (1)
After driving 1800 kilometres on the first leg of our Yukon road trip it would’ve been nice to stretch our legs and explore Whitehorse, but instead we drove another 1500 kilometers, first west then north, then south, before turning back to Whitehorse.

Our goal was to finish as much of our original loop as possible, and our first stop was back to the U.S.-Canada border. If the top-of-the-world border crossing is the most isolated and as far north and west as you can get in the Yukon, then there’s a good chance Beaver Creek is the second.

The first leg of the route, on the way to Haines Junction, Yukon, is about two hours of smooth blacktop bordered by spindly black spruce. The only stop we made was Pine Lake Campground for a photo op. No wind meant Pine Lake was reflecting pool calm. We sipped hot coffee while dipping our feet in the cool water and admiring the mountains of Kluane National Park cascading snowcapped into the west. 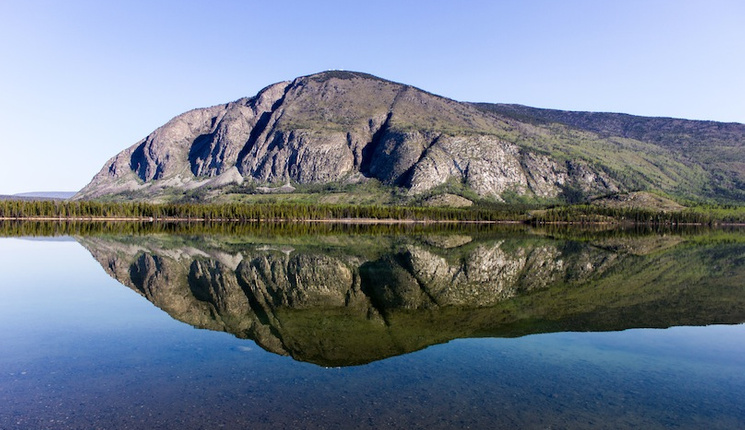 Soon we reached the south end of Kluane Lake. At 81-kilometres long, it’s the largest within the Yukon, and, where the road bends around the southern end of the lake before heading north, you pass Sheep Mountain. Stop at the Parks Canada visitor centre and you can see Dall sheep (often confused with mountain goats) through spotter scopes for free.

Following the western edge of the lake north the road begins to disintegrate. It was the worst stretch of road we drove in the Yukon. My one attempt at a nap was ended when my head bounced off the passenger door window during one of Jeane’s wild swerves around a pothole. Worse, where not pockmarked with axle-busting holes, the road is an undulating stomach churning rollercoaster of frost heaves.

Eventually we reached Beaver Creek, lunch still in our bellies and the axles on the dust coated Matrix still intact. Beaver Creek, with its mix of First Nations, border agents and abandoned log-cabin-esque motel, is an odd outpost. (And it is an outpost: the only real grocery store is back in Whitehorse, though the local bar/restaurant, Buckshot Betty’s is worth a visit. Be warned though, I was told Betty is a character. That I, an obvious outsider, managed to engage her in a civil conversation—essentially I said that I’d be back later for a beer—was rare enough that Jeane told her local friends who seemed genuinely surprised I came out unscathed. I thought she was sweet.)

We found Jeane’s friends and made our way to Pete’s Cabin, a local fishing spot named after the owner of the abandoned cabin. A good spot for grayling, it’s frowned upon to visit the site if you’re not in the company of locals. Fishing holes in the Yukon are basically the same as back east, but the reality of the wildlife in the Yukon makes for one obvious difference: our hosts never fish without a shotgun.

“The first two rounds are rubber to scare the bear away,” he said loading his oily black 12-gauge. “After that, if it’s not gone, the next few rounds will stop it. I have my bear tags (hunting permit) just in case. I don’t actually hunt them, but it saves paperwork if you do have to kill one.”

Beaver Creek is the land of the White River First Nation. Fortune hunters moved in during the gold rush, and later, during World War II the U.S. Military set up an airport in the bush at a place called Snag as part of the Northwest Staging Route, a chain of airports through Alberta, British Columbia, Yukon and Alaska that allowed access to Russia during the war.

What remains of the airport is an overgrown landing strip and the scattered ruins of huts 20-kilometres off the main highway on a road Jeane’s Toyota Matrix could never have survived. It was the only time we left the little blue car behind, opting instead for a ride in Jeane’s friend’s Chevy pick up.


Snag’s claim to fame happened on Feb. 3, 1946. For a week, cold air from Siberia had settled over the area, until finally on the night of the February 3, soldiers stationed there experienced the coldest temperature recorded in Canada, and the third coldest recorded in the world, minus 63 C. Given the dry heat and blackflies, it was hard to picture the place being so cold that when one exhaled their breath hissed and left long vapour trails.

We had one more stop to make. If you pop in to the visitor centre look for Sid Van der Meer. Sid is tall, quiet until he gets excited, white haired and as lean as his wire-framed glasses. If you ask nicely, he’ll take you to his home and private museum (he drove us in a 1940s Buick Super he was restoring). Divided into themed sheds — an army hut, a general store, a barbershop and a bathhouse — the museum is as eclectic as he is and he’s happy to show people around.

“The most interesting thing I’ve got? Well there’s the 37 million year old turtle shell. But this tombstone is neat,” Van der Meer says gesturing to a weathered wooden tombstone split in half lengthways, with a half sun carved into the top. It reads: CHARLES WARKINGTIN 1860-1902.

“I was canoeing down the Yukon when I found half of it sticking out of the bank of the river. I looked around for the other half but didn’t find anything. The next day, way downstream, would you believe it, I found the other half. Probably some old miner’s grave that got washed away.”

We said goodbye to Sid and turned back. We were on our way 530-kilometres south to Haines in the middle of the Alaskan panhandle for a beer festival.

Most of the route is bordered on the west by Kluane National Park and Reserve in Canada and Tatshenshini – Alsek Park in Alaska. There are must-stop vistas everywhere. If you’re pressed for time the one stop you have to make is Kathleen Lake. It’s one of those places where you just shut up and stare: mountains, glaciers, water, rock, trees, a light rain the day we were there; it was as elemental as any place I’ve been, and I didn’t want to leave. But craft beer called.

Haines, Alaska sits on a peninsula that juts into a channel that leads to the Pacific. On the east side is Chilkoot Inlet, which is home to Skagway, Alaska and on the west side is the Chilikat Inlet where Jeane and I came from.

Haines was, like so much of the region, defined by the Gold Rush. It offered a staging point for the Dalton Trail through the Chilikat Inlet before Skagway became the main entry to the Klondike. With Skagway’s rise, Haines usefulness to stampeders fell. It was converted to a military base and fishing town with four canneries, which have since closed. It now plays host to various festivals, Discovery Channel shows and a fading lumber industry. Adventure tourism seems to be its new niche, but Haines still feels like a fishing town on the ropes. Beautiful and damp, the moisture that makes it so lush is also rotting its once stately buildings and swallowing its centuries old graveyards in thick wet moss. Stop at the Fog Cutter for beer, greasy food and a look at the wall of pictures from Haines’ early days.

Sight seeing aside (there are parks and reserves everywhere), Jeane and I were there for a craft beer festival. We set up our tent on the edge of the old military parade grounds, which is surrounded by pricey bed and breakfasts. The festival is big business for Haines, most of the people seemed to come from Whitehorse, and I was told that local bylaws change for the festival to allow for camping and beer drinking anywhere at anytime on public property to ensure the festival is a good time.

All I’ll say about the event is that if you get the chance, go. It’s a great afternoon party with delicious beer and fun people. The next day, hazy and a touch dehydrated I boarded the Haines - Skagway ferry for the last leg of the trip. Jeane and I parted ways there. She was graciously retracing our route back by car, while I took the walk-on ferry with her roommate, who would drive me home from Skagway, so I could finish the loop. I felt a bit like I was betraying Jeane, leaving her alone for the five hour drive home, but she insisted.


And I’m glad I listened. Heading north again, it was easy to imagine the anxiety and excitement the stampeders must have felt on their way to the unknown in search of gold 115 years earlier: unnamed rivers plunging down steep channels, cloud and mist covering untamed mountains to the east and west, and the safety of home thousands of kilometres south. Foolish, brave or both, they soon arrived in Skagway, the easy part behind them. North of Skagway, the difficulty of the route is legendary.

The miner’s would leave Skagway and begin the infamous Chilkoot trail. In the summer its rocky slabs mean more of an all-fours scramble than a hike. In winter a single file snow staircase was carved into the ice called the Golden Staircase. By all accounts, it was a brutal 50-kilometre hike. (Even today it’s not easy. A friend who hiked it this summer said she was almost in tears scrambling up the wet rocks of the pass.) By the early 1900s, the White Pass and Yukon Route train was established which eased the passage of those who could afford it.

Skagway reminded me of Dawson City, only it’s obvious that it’s become a favourite stop for Alaskan cruises. Its streets are paved and it feels far more metropolitan than wild and dusty Dawson far to the north. Cleaner, slicker and self-conscious, it’s as though Skagway knows it has to ham it up, while Dawson is simply dirty, charmingly campy Dawson. That said, I’d visit Skagway again in a heartbeat.

The road north is another spectacular drive. It climbs steeply outside of town, and even in May the glacial lake and erratic filled plateau at the top of the pass, near the Canadian-United States border, is patchy with snow

Soon the terrain begins to resemble the Yukon again: black spruce and animals. A big grizzly was sitting by the roadside counting cars around one bend. The drive isn’t long and Whitehorse locals visit Skagway often, if for nothing else than the Thai food at the Starfire Café. But there is one stop that for a first timer driving between the cities that is must: Carcross Desert.

In the middle of the standard Yukon vista of dark green spruce needles, is what appears to be a desert. Sand dunes spotted with small stands of trees for more than two-square-kilometres. It turns out it’s an ancient lakebed and not a true desert, but feeling the hot sand on my feet was welcome surprise.

Soon we were back in the familiar rolling hills and smooth black top outside of Whitehorse. Jeane arrived shortly after and we went for a last beer on the eve of my trip back east to Ottawa. The 3,300-kilometre road trip was officially over.

Gold-fever may not exist anymore, but Whitehorse is full of people from away who caught the Yukon bug, packed up and moved, each one a mix of runner, searcher and stampeder hunting for their own bit of gold.

I’ll be back first chance I get.