Vanlife in the North: Spending the winter on wheels

While jumping on the van-life wagon might seem like a great idea during the warmer months, what happens when winter settles over Ontario?

Join the Conversation (0)
Whether a breakaway response to the pandemic, a means to circumvent rising housing costs or just jumping on a social media trend, vehicle living (or #VanLife, as splashed across Instagram) has seen a massive, recent uptick across Canada and the United States.

Yet as the cold weather sets in, prompting Ontario residents to seek all things warm and dry, are the province’s hopeful van-lifers condemned to second guessing this choice? Are they leaving their homes on wheels for an apartment, or are they migrating to balmier climates?

“You can absolutely live in your car year-round in this province,” said Madison McNair, digital nomad and part owner of Ray Outfitted, an Ontario-based business which provides custom support for off-grid projects such as campervan builds and mobile office upfits. “It really depends on the person.”

McNair is one such person. She, along with her husband, spent more than two years travelling Canada and the U.S. full-time in their own converted van before opening their business. They have spent several nights sleeping in their wheeled home in minus-40-degree-Celsius conditions.

“What your own winter van-life experience will be like depends on the investments into your vehicle,” said McNair. She said that nearly any vehicle — van or otherwise — can be outfitted to weather winter conditions in Canada.

McNair said that having warm gear, ventilation and a heat source – one that doesn't consume the oxygen inside the vehicle and is properly vented – are key considerations. “Read labels and be careful in your choices,” she said, cautioning that popular products such as Mr. Buddy and other similar propane heaters are for outdoor use only and shouldn't be used inside a vehicle.

“Power is also imperative, and a reliance on solar is rarely enough for full-time Ontario van-lifers. As such, batteries charged by the alternator while driving and shore power (using a public electrical outlet), when it’s available, are a better bet.”

McNair said that any basic winter vehicle conversion should include such elements as a rooftop ventilation system with a weather hood, a heater that taps into the auxiliary fuel ports and a 12-volt electrical system to power the heater’s fan and pump.

However, she said, the sky is the limit for other winter luxuries, such as the radiant heated floors that the couple has installed in their own van.

She said an inverter – which converts vehicle battery power into a different voltage so appliances can be operated – that supports laptop charging can come in handy. “Also, insulating window covers can make a considerable difference when trying to hold in some heat, but make sure to leave a vent open or you'll wake up with frost on the inside of your windows,” said McNair.

Emilie Guerin, who runs popular van-life YouTube channel The Cat Lady Van, said her own experience of living in her SUV in Ontario was first prompted by necessity and has since evolved into a passion project. 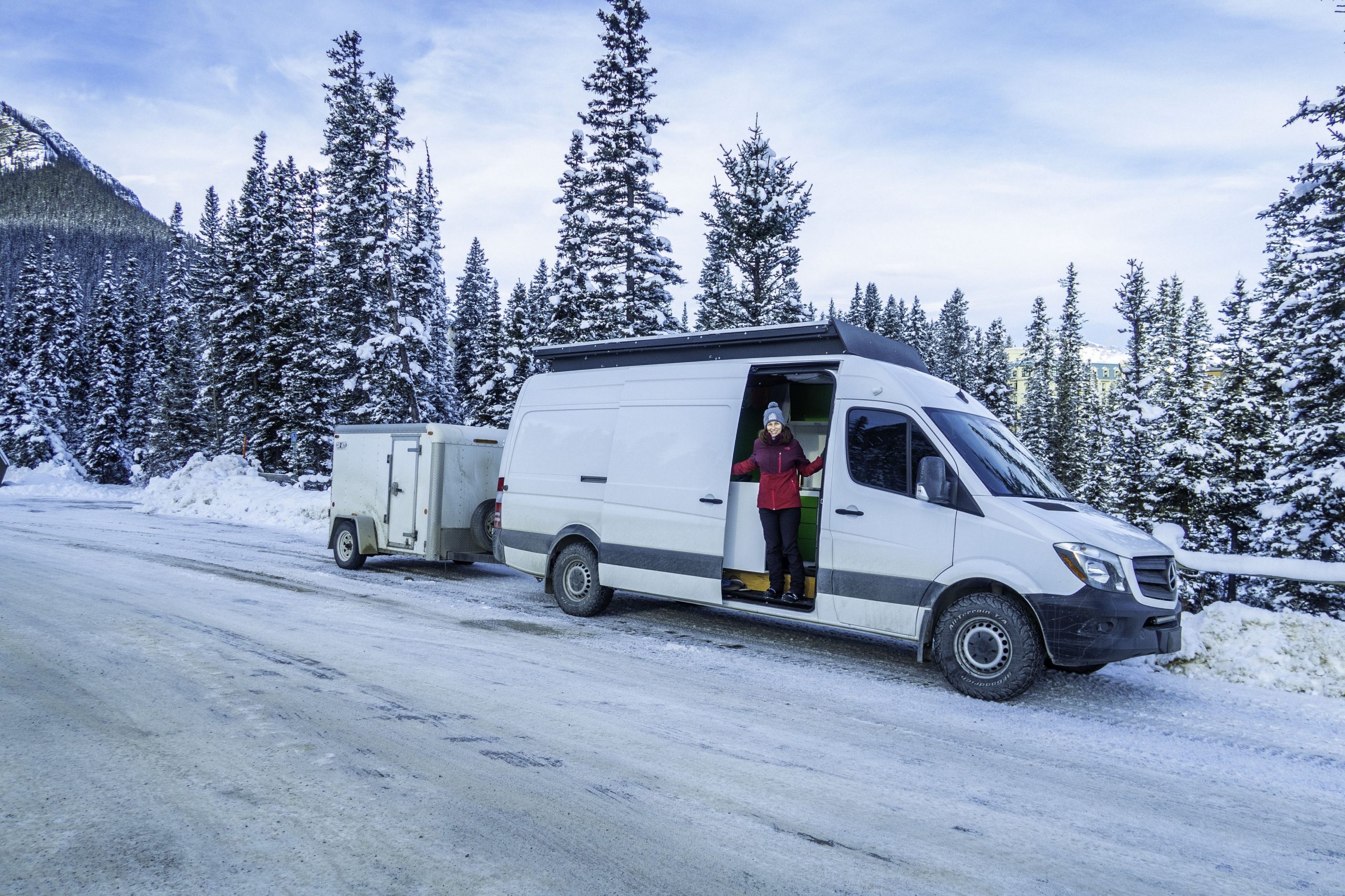 “After a difficult breakup, I ended up moving everything that I owned to a storage locker and sleeping in my SUV,” said Guerin. “The coldest I slept without a heater was around minus-17. I had a lot of blankets, a good sleeping bag, and some hand warmers for extra heat.”

Guerin said that although this time could be perceived as the lowest point in her life, it turned out to be the best thing that could have happened to her. Released from the constraints of society’s expectations, she took time to reflect on what she wanted, and did not want, out of life.

“I actually spent three years after that doing van-life without a heater, other than the one which was already in my car,” she said, adding that if the temperature reached dangerous lows, she would stay at a friend’s house or at a hotel.

“Now, myself and my cat are truly van-living full time,” she said. “I have a 2011 Ford Econoline with an electrical system. I spoil myself with a good heater — a Webasto — that taps into my gas tank. I have a thermostat and even a timer that I can set to have my van warm when I get up.”

Guerin said that despite having a nice heating system she still uses all her survival techniques, such as adding extra insulation to her windows and using her sleeping bag as a warm blanket.

“For those considering living in a vehicle full-time in Ontario, I would say don’t be scared of winter but definitely be prepared,” she said “Even when sleeping in my SUV I had Plan B and Plan C if something went wrong. I always think of the worst situation to be prepared for and will take extra precautions such as parking in an appropriate place to not get stuck in the snow, and always keeping extra blankets on hand if needed.”

McNair cautiously echoes this sentiment. She said that while there is a current boom in people turning to van living, they need to take extra care to ensure they are properly prepared for the cold.

“The biggest misconception right now is that anyone can retrofit a vehicle with complex plumbing, electrical and heating systems with finishes ready to compete on Instagram and Pinterest,” she said. “We have a growing number of clients who rushed to pay $60,000 to $90,000 for a ‘professional’ to upfit a vehicle and are shocked to discover it looks pretty in photos but isn't functional, durable or repairable.”

McNair said the vehicle you plan to use as your home needs to be treated with respect, and she hopes people are careful who they trust. As well, she adds that a certain amount of maintenance and repair knowledge is important for anyone deciding to do this.

“It’s important to have tools along with you and the ability to provide your vehicle with the ongoing care it will need,” she said. “Just like a stationary home, everything will need maintenance in time.”

McNair said that while proper care and planning are imperative for thriving through the winter, there is good news for those who impart the proper care, time and research to their plans.

“Remember that Ontario has some of the harshest conditions even within Canada, because not only do we get the extreme cold but also extreme heat,” she said. “If can equip your vehicle to handle the realities of Ontario, then I’ve got great news; you can literally take that rig anywhere.”