Road trip of a lifetime to Montreal, Quebec City and Ottawa

A sabbatical road trip of a lifetime to Montreal, Quebec City and Ottawa.

Join the Conversation (2)
I’m sure a lot of guys around my age (40s) can relate to the feeling of pondering life and what we’ve accomplished up to this point. When we feel a shortcoming and are unsure of our worth, a mid-life crisis may ensue. In the past year, I’ve gone through a lot of changes with family and work which have lead me to think about my past, present and future and what I want out of life as I embark to start a new chapter in my career.

When making difficult decisions, sometimes it’s best to take a step back and look at the big picture. I needed a break; some “me time” to reflect and think about my next steps and come up with a game plan for what I want to do career wise and how it will fit into my family dynamic. I love to drive in the countryside where there’s less traffic and a more scenic peaceful space so I decided to take a solo road trip for a week away to find solace and think about the meaning of life.

I recently bought my childhood dream car – a 1990 Nissan 300ZX Twin Turbo. I love the Ferrari’s (Testarossa) and Lamborghini’s (Diablo) of the day but these exotic sports cars still fetch a fair buck (plus the high cost of maintenance) so the 300ZX is a more attainable (mid-life crisis) sports car. Although I have a reliable and fuel efficient Acura CSX as a daily driver, it seemed more fitting to take my 25 year-old nostalgic sports car on this Ontario/Quebec driving adventure. My 300ZX had 76,685 KM on the odometer when I departed Mississauga and 78,545 when I got home so the trip was 1,860 KM total. 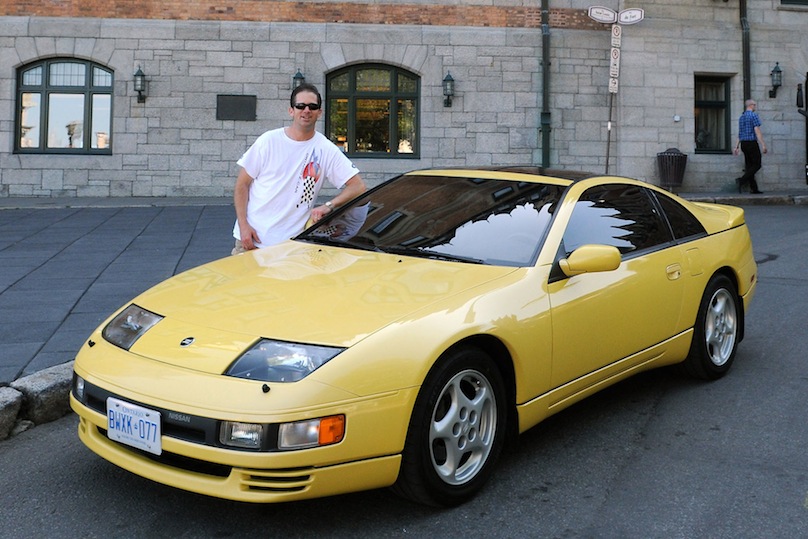 At the famous Fairmont Le Château Frontenac in Quebec City[/caption]


My plan was to spend two days visiting an old friend who I met in my art program at Humber College. He lives in Pierrefonds Quebec, a suburb of Montreal, Quebec. From there, I would drive to Quebec City to spend a day sightseeing and Ottawa for two days to relax and decompress. My schedule was clear and I had my wife’s support and blessing so I packed my bags and was excited to embark on my sabbatical road trip of a lifetime!

I left my Mississauga home after rush hour on a Monday morning. The drive east on Highway 401 was smooth sailing with a just bit of traffic congestion in Toronto. Highway 401 runs from Windsor to past Cornwall and turns into Highway 20 in Quebec. The highway is smooth and easy to drive with “On-route” service centres every 100 KM or so to provide a washroom break, food and gas. I stopped at the On-route in Mallorytown near Kingston for lunch. My next stop was the Quebec Welcome Centre on Highway 20 just past the border. From there I arrived on the west side of Montreal at evening rush hour. Traffic was heavy however I got to my friends’ house in Pierrefonds just 10 minutes past the time my Garmin GPS had earlier indicated. 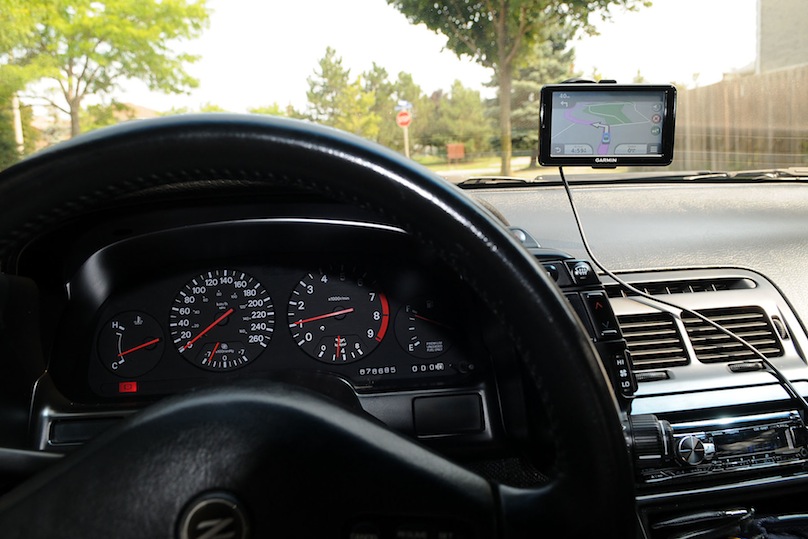 At the famous Fairmont Le Château Frontenac in Quebec City[/caption]

The two days spent with my friend Darren were fun and relaxing. We reminisced about old times and lived it up, hitting the town and sightseeing. Montreal, Quebec is an amazing city with so much to see and do. Just walking around downtown provides amusement with an interesting mix of cultures and characters. There are many entertainment and dining options. I recommend checking out the Old Montreal district with its cobblestone roads and beautiful architecture.

In the evening we did some bar hopping in the entertainment district of Montreal and grabbed a cheap hotel in the middle of the action as a convenient place to crash. The hotel is called Hotel Villa on Sainte-Catherine Street East. It is a very old hotel with the smallest elevator I’ve ever seen. The rooms are okay, well good enough for our needs. It is a loud busy area of Montreal and the hotel doesn’t have designated parking so I settled my precious 300ZX in an open public lot across the street from the hotel. The next morning, on our way out of downtown, we swung by the Bell Centre where the Montreal Canadians play to take a photo of the yellow Twin Turbo with a landmark. 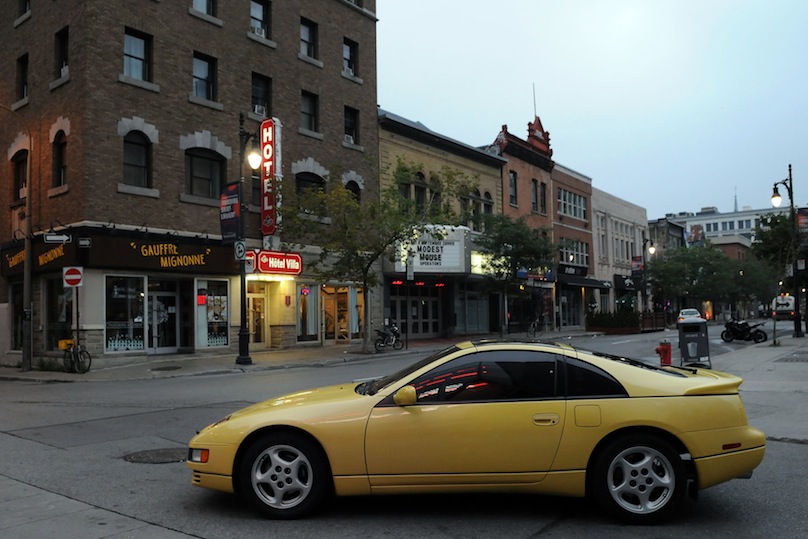 The drive from Montreal to Quebec City was the best part of the road trip. Mid-day traffic in Montreal was heavy, worse than Toronto, but once I got out of the city limits it was a leisurely cruise along Highway 20 all the way to Quebec City. The scenic landscape offered a view of rural farmlands and mountains to keep my attention on the road and my surroundings. This part of the trip was approximately 3 hours of driving and 300 KM. There are no service centres on this stretch of Highway 20 so you need to pull off into one of the towns for gas, etc. 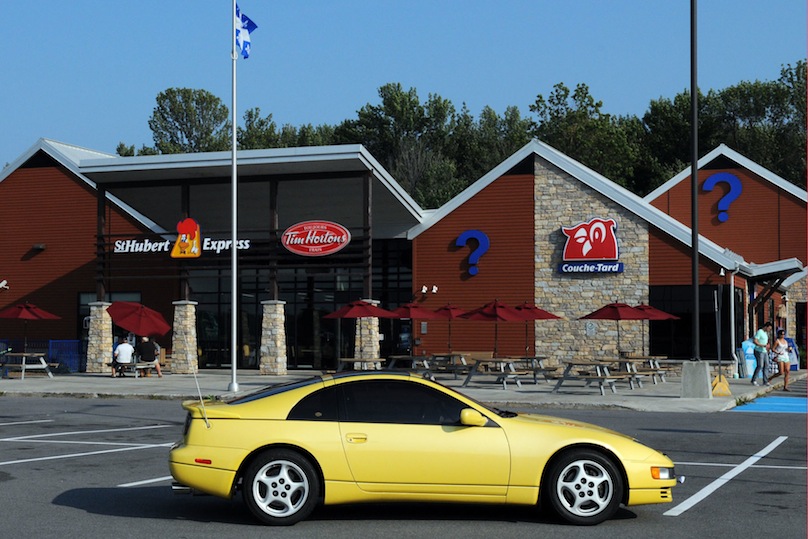 Founded in 1608 by Samuel de Champlain, Quebec City is one of the oldest cities in North America. Old Quebec’s narrow cobblestone streets lined with bistros and boutique shops, resembles a European city. There are mostly one-way streets and Old Quebec is very hilly and tricky to drive. I imagine it would be treacherous in the winter. Regardless, I enjoyed cruising around, taking in the sights including Parliament Gardens, Fairmont Le Château Frontenac, La Citadelle and the Museum Of Civilization to name a few. There is an abundance of history and museums in Quebec City making it an essential tourist destination for anyone who appreciates old world charm. I stayed at Hotel Acadia in the old part of town. Like most of the hotels in that area, Acadia is old fashioned and beautiful. Parking is in a safe lot behind the hotel, $20 a day. 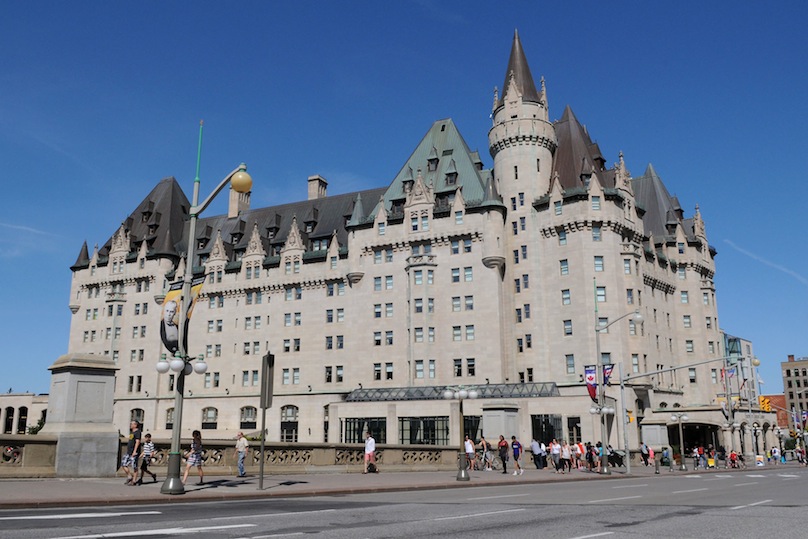 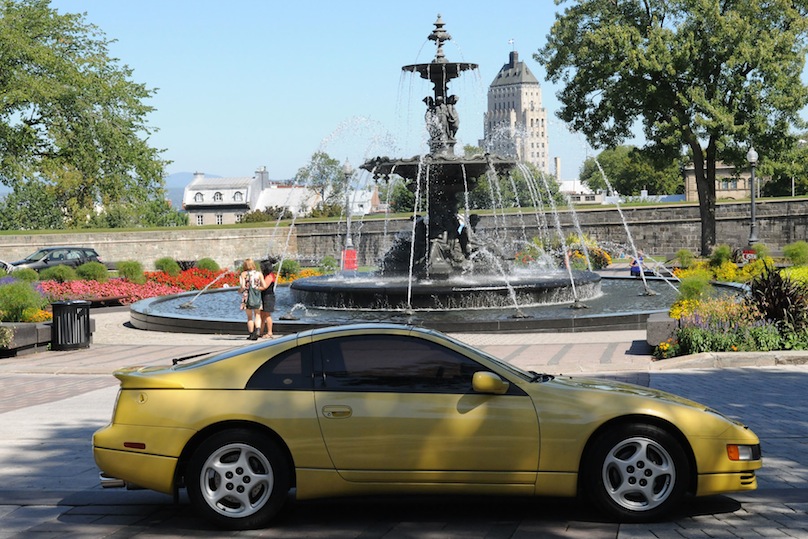 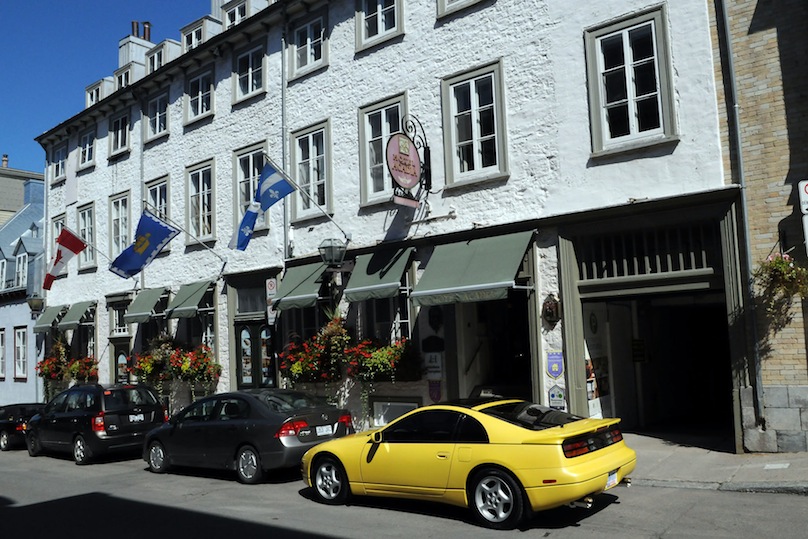 For me Quebec City represents my first right of passage as a young man, venturing out (without adult supervision) when I went with a group of friends on a high school ski trip during Christmas break 1991/92. My 17th birthday was celebrated on this trip and needless to say we had a lot of fun. Walking around Quebec City brought back memories from two decades ago – a carefree time in my life with minimal responsibility. Now, like many my age, I’m married with children, have a mortgage, cars (4) to maintain and a great magnitude of responsibility. I was enjoying Quebec City but it was time to carry on to my next destination as getting back to reality was only a few days away and I still had a lot to see and do.


The drive from Quebec City to Ottawa is approximately 4.5 hours, 450 KM. The first half along Highway 40 is rather boring with not much interesting to look at as the highway appears to be cut out of a forest. Not the most satisfying experience as I had to drink a Red Bull to keep my attention and my car’s front was covered with bug splatter by the time I got to Ottawa. The best part of driving along Highway 40 is passing through the lovely city of Trois-Rivières. As you approach Laval, Highway 640 takes you to Highway 50 for the more scenic stretch to Ottawa. Most of Highway 50 is one lane so it moves slowly at times but does extend to two lanes periodically to allow passing. I entered Ottawa through Hull, Quebec during evening rush hour. Traffic is light compared to Montreal and Toronto. 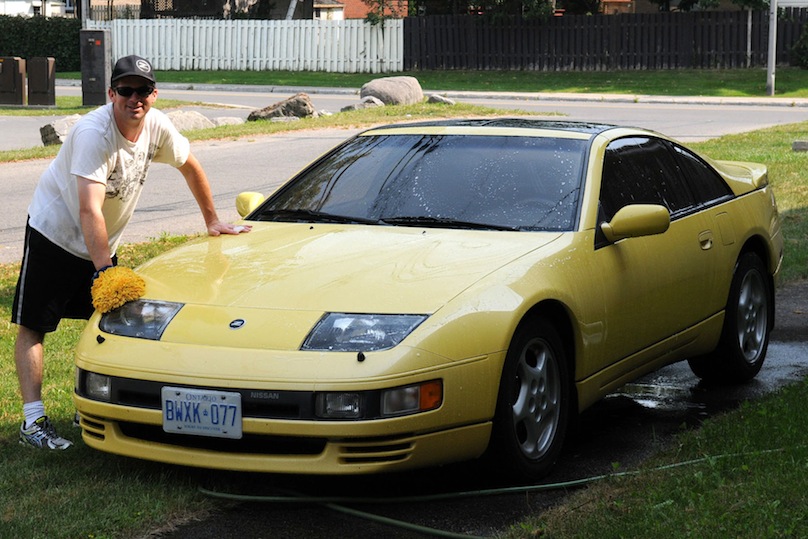 Washing the 300ZX after each leg of the road trip[/caption]

Ottawa was the best part of the vacation because I was there for two full days and had more time to relax and reflect. I stayed at the upscale Marriott Ottawa close to all the attractions. I had a magnificent view from my 26th floor room and could see the best part of our nation's capital. Part of my mission on this road trip was to take photos of my car at tourist attractions/landmarks in every city I stayed. Ottawa provided a fantastic scenic backdrop with Parliament Hill, Fairmont Château Laurier and Hull Quebec, which overlooks Ottawa River. I also recommend checking out ByWard Market, Royal Canadian Mint and the many national museums. There is stellar nightlife in Ottawa with several bars and pubs in Rideau Market. 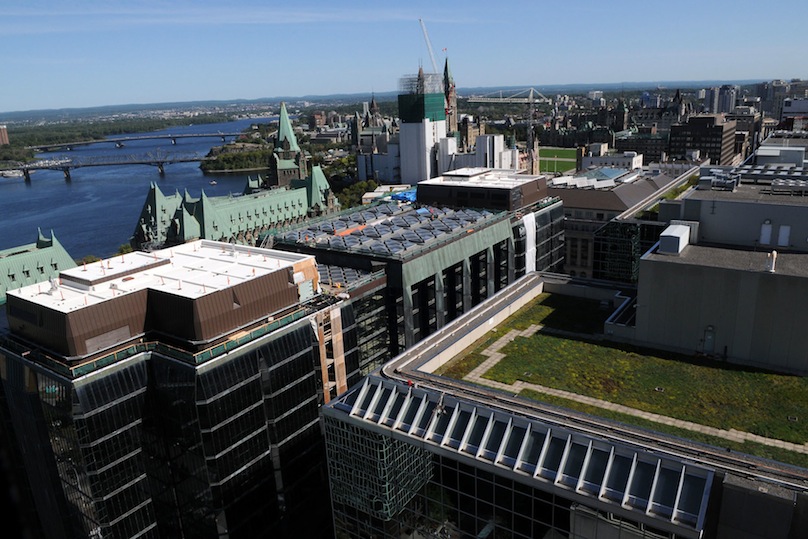 After two well-spent days in Canada’s capital, it was time to head home and back to reality. I could have taken the scenic route along Highway 7 but I was tired and wanted to get back to my family before the kids bed time so I took the most direct route: Highways 416 and 401 to Mississauga. Travel time is 4.5 hours, 470 KM. I was happy to be home with my family for the rest of Labour Day weekend. The kids were back to school the following week and I had a renewed lease on life with a greater appreciation for family plus ambition and motivation to have a productive fall taking on writing and photography assignments as a self-employed contractor. 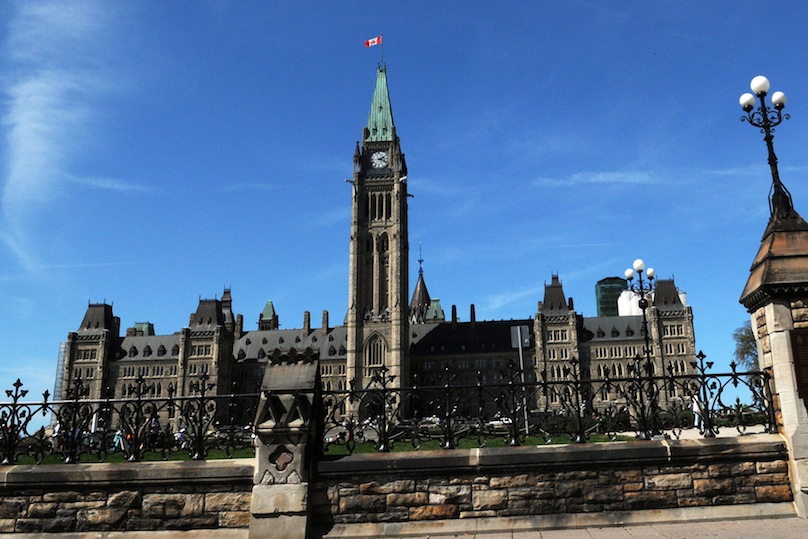 My 25 year old Nissan 300ZX ran perfectly the entire road trip and felt like a new car. This is a testament to the build quality of many of the Japanese vehicles from that era. The old girl calls for premium 91 octane. I didn’t concern myself with how much I was spending on gas, food and hotels. I wasn’t trying to do this trip on a tight budget. The purpose was to treat myself to a well-deserved getaway and I certainly enjoyed it. These opportunities don’t come along often so I took full advantage of my vacation time. 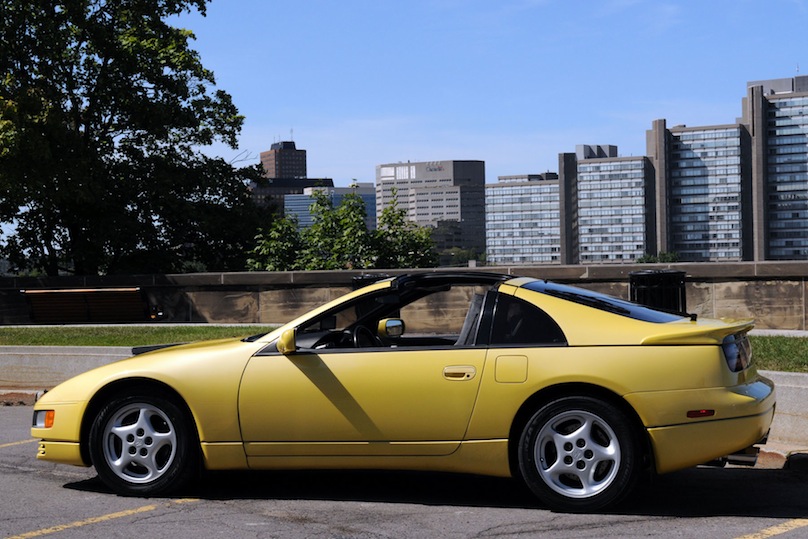 Road trips are fun if you’re prepared and have an itinerary. It takes the stress out of traveling and you enjoy the experience and feel fulfilled when you get home. I know my sabbatical road trip of a lifetime was just what the doctor ordered (literally). It has helped me gain a greater understanding of life – value family time, health, enjoy your work, don’t waste time being unhappy, and most of all love your car and the people you spend time with, including yourself.

Suggestions for preparing for a long road trip: Have your car’s oil changed and visual inspection to ensure brakes, tires and other vital safety components are in good working order. Plan your route and breaks by looking on Google maps to familiarize yourself with the distance and roads you are travelling. Program destinations into a GPS device (or your cars’ built in navigation system) to guide you throughout your trip. Take a car charger for your mobile phone. Subscribe to CAA or another roadside assistance program. Get medical insurance if travelling outside your home province. Consider pre-booking hotels through travel deal websites such as Hotels.com, Hotwire and Expedia.

Jason Okolisan is a Mississauga based freelance journalist and photographer specializing in automotive, event coverage, business profiles and commercial photography. He was Wheels section editor for The Mississauga News and Brampton Guardian newspapers during his sixteen years with Metroland Media. Jason writes about a variety of automotive topics including product reviews, local news coverage, technical articles, lifestyle pieces and new car reviews.